The Global Downside To Eurodollar Decay

The Global Downside To Eurodollar Decay

It is exceedingly difficult these days to detect where finance ends and the economy begins. That was intended, of course, as it was believed that greater intrusiveness on the part of the financial ends were consistent with greater, and better, economic control. Certain strains of economics have been obsessed since the dawn of the discipline with finding “optimal” outcomes. More recently, especially since the 1960’s, that has been transformed into not just understanding them or their potential but actually creating them through commandment of finance.

The generalized view of the current global predicament is simply that those seeking “optimal” outcomes through “optimal” control don’t have any real appreciation for how their efforts have transformed pretty much everything. The Federal Reserve in the United States still operates as if the US dollar were the US dollar, applying narrowly to just the circumstances within the US. Only recently (somehow it took until 2010!! for them begin thinking of unifying federal funds and eurodollars; one of many massive mistakes in 2008) has the eurodollar system become even a small topic of interest.

But even now, central bankers are perplexed by the state of finance as well as the global economy. Janet Yellen still declares the financial system “resilient” when in fact she and the FOMC has to answer (or “choose” not to, directly) as to all the anomalies spread all over the place. Q1 GDP is “unexpectedly” weak, treasury yields are violently volatile, China is an unrequited mess, emergency monetarism is still “necessary” almost everywhere eight years later; anomalies all?

That description might actually fit were it attached where it properly belongs, to the eurodollar standard itself. Since August 2007, the eurodollar standard has never been the same and it had taken a rather self-destructive course starting in the middle of 2013, tracing back to, again, the Federal Reserve’s blindingly narrow understanding of the world they had an enormous part in creating. 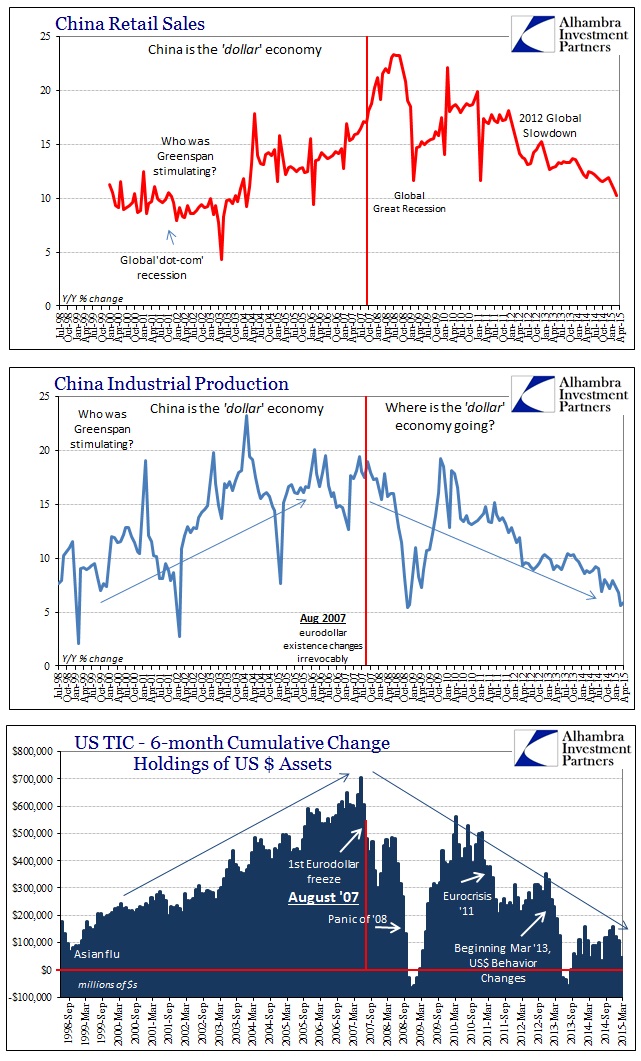 That is the primary problem, as there is no extracting one from the other. The manner in which they were built was simultaneous and quite deep – the serial bubble economy. Marginal growth depended on those bubbles expanding not just “demand” in the US, but also in funding economic growth elsewhere (mistakenly termed “hot money”). In that respect, these parallel movements were actually the same as it was self-reinforcing. The greater the bubbles here and in Europe, the more there was this artificial economy to seemingly justify rapid “dollar” expansion to service it; China in particular. Thus the eurodollar system’s ascent was China’s.

With the August 2007 rupture, however, China’s once thrilling climb has turned into a terrifying descent which is only now reaching new depths. Chinese economic statistics are finding themselves in correlation only with the Great Recession, which has led to unending calls for China and its PBOC to do anything and everything to “stimulate” growth. The PBOC, for its part, has resisted at least that orthodox view because they recognize the futility here, at least in the form of asset bubbles (it is difficult to discern whether they discern the larger “dollar” structural disruption, but it is hinted at here and there). That has left a situation where China instead of performing the economic role of salvation after 2009 is left as the frightening transmission of all that is wrong.

China’s trade continued to shrink in May, underlining the slowdown in the world’s largest economy in purchasing power terms and raising expectations of further stimulus measures.

Imports to China fell 17.6 per cent year-on-year in US dollar terms, nearly twice as bad as forecasts for a 10 per cent drop, according to government data released on Monday. This is the seventh consecutive month of falling imports, suggesting consumption in China continues to wane.

Exports, the driver of China’s boom, fell 2.5 per cent from a year ago, a third straight month of decline.

Exports continue to decline, which suggests no rebound still in “demand” anywhere despite the huge presence of financial imbalances in every end market (US most especially included). That hints at the very nature of the structural turn in the eurodollar standard itself, that bubbles on this side of the event frontier are now exhausted completely by trying to maintain only the leftover remnants of the last one, leaving little room for even leakage into new artificial growth. We have an immense corporate bubble in the US, and the Chinese this time are seeing none of it. 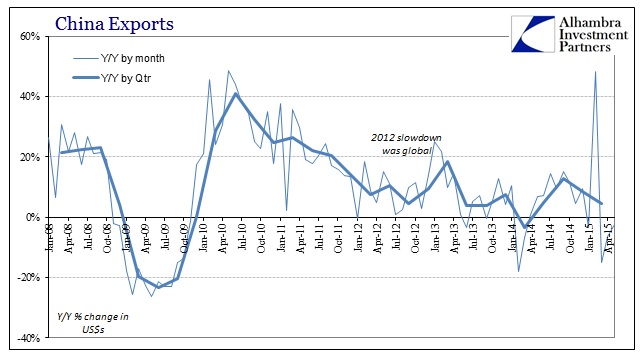 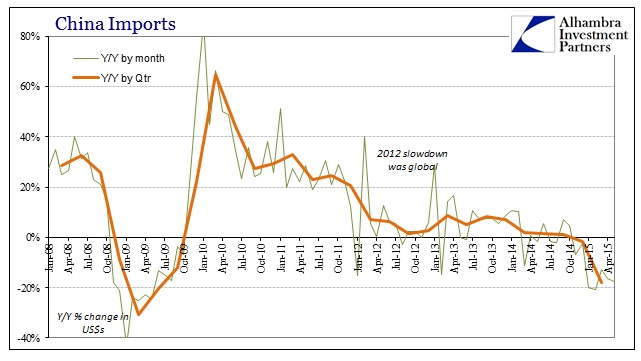 From China’s perspective, why build more steel mills if there are already too many to begin with and there is no sign that steel demand is about to rebound for manufacturing into exported goods? The same holds true for the internal Chinese bubbles, as the PBOC has made plain that they will not underwrite them any longer for the very same reason.

All of that leaves the rest of the world in even greater stress. There are no bigger cheerleaders for the PBOC to turn back the clock to 2009 than the great many resource economies of the world. Brazil, for example, as one of the world’s ten largest economies exemplifies the seriousness of this reduction in global economic trade tracing back to the “dollar’s” role in serial bubbles. Brazilian banks have become, as primarily a necessity of the bubble economy, “short” the “dollar.” To gain access to global economic markets has meant Brazilian banks becoming intimately familiar with the eurodollar business.

The great rift in 2013 was therefore quite painful to the real’s experience. Worse, however, the Brazilian central bank opted to follow the orthodox treatment which was wholly unsuited for this global, structural deficiency. Rather than actually facing the financial problem head on, they made it much, much worse.

If you got all the way through that you realize that the Brazilian central bank starting in August 2013 impelled their own domestic banks (and foreign subs operating in the country) to go further short the “dollar”! Which they did. The usual alleviation pattern in a short squeeze is most especially not to increase the proportion of float dedicated to shorting. In other words, by the time of the second “dollar” eruption in June 2014 Brazil was in much, much worse shape with its own central bank impelling a far greater and far deeper “dollar” imbalance; only needing a spark to blow it all up and take the form of another synthetic squeeze. [emphasis in original]

Like most central bank programs, they seem to work – at first. Banco do Brasil’s synthetic swap program did too, but it wasn’t the swaps that were the real’s safety but rather the pause in the eurodollar attrition between the 2013 violence and what was to come after June 2014; the normal ebbs and flows in any crisis wave that somehow economists and central bankers continue to map out in linear extrapolations (the most famous example being the period between Bear Stearns and Lehman). By September 2014, the real was again collapsing, this time far worse. 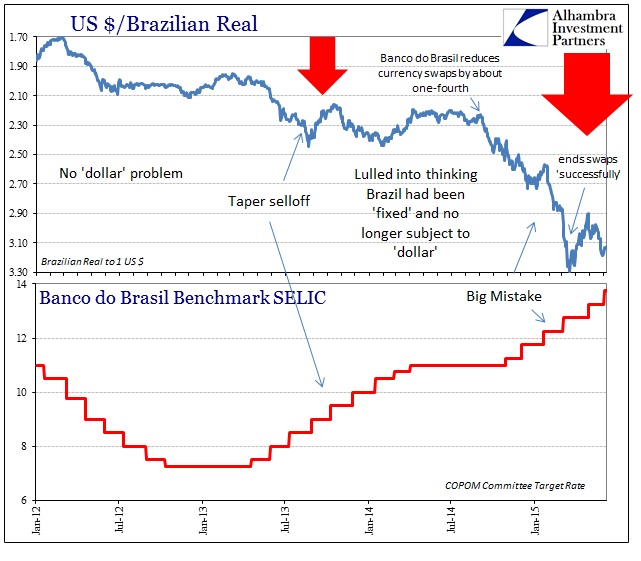 By the time Banco ended their swaps program in late March 2015, it was clear they had no positive effect except to place Banco’s monetary “costs” into the stratosphere. In other words, it was a highly inefficient means to go less than nowhere. They were, as all other central banks, trying to “buy time” with which it is always expected that the economy will recover on its own. In this case, it was intended that US and European efforts to control their economies through the same financialisms that brought up the eurodollar bubbles in the last decade would eventually have the same effects. In some respects, they did, just in reverse.

Now Brazil is caught in the worst sort of vise, with the “dollar” financialism on one side squeezing the currency and the real global economy’s declining “demand” on the other taking whatever life is left out of the Brazilian economy. Not to make light of this situation, but it is the perfect expression of the eurodollar decay, the intersection and inter-marriage of eurodollar finance and serial bubble economy. Brazil is in recession and its exports fell in Q4 (the latest figures) at a rate far too similar to the Great Recession. 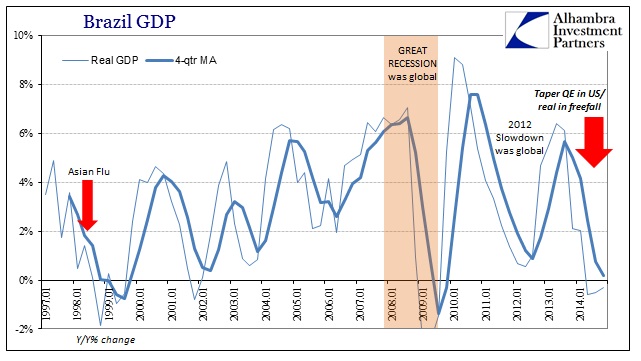 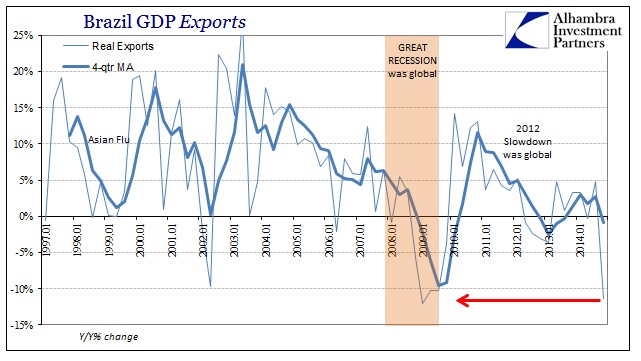 The cumulative lesson here is that it was folly to try to rebuild the global bubble economy as it was prior to August 2007. Further, the eurodollar standard itself proves that it was simply impossible. The “heights” of financialism reached by 2007 were not highs at all but peak danger of imbalance. The damage caused by reversion to the mean destroyed the internal capabilities to carry all that out once more. Instead, financial imbalances on this side of the estrangement are almost exclusively financial, which proves the nature of central bank management even where those efforts make no sense.

What central banks should have done is quite simple, analogous if not more extreme to what the PBOC is doing belatedly. We should not even want to rebuild the world as it was in the decade of the 2000’s because it was so unbelievably unstable, a fact revealed persistently in the nearly eight years since that peak. Economists and central bankers treated the Panic of 2008 and the Great Recession as if it were a temporary interruption in an otherwise healthy system, a cyclical problem that over time heals on its own. Most of them still, to this day, hold the same view and the world’s economy and financial system is paying the costs of doing so. The eurodollar economy is falling apart and no amount of orthodoxy can reverse it because the eurodollar economy is orthodoxy.