While the latest business inventory estimates are not yet updated for May, only through April, there is still a great deal of consistency provided by the top to bottom shifts in the economic supply chain. It usually takes an inventory build of tremendous disproportion to trigger the kinds of cutbacks and downstream negative pressures that amount to a recession. The estimates for inventory building provided from the GDP statistics certainly qualify, as do the Census Bureau’s own data. 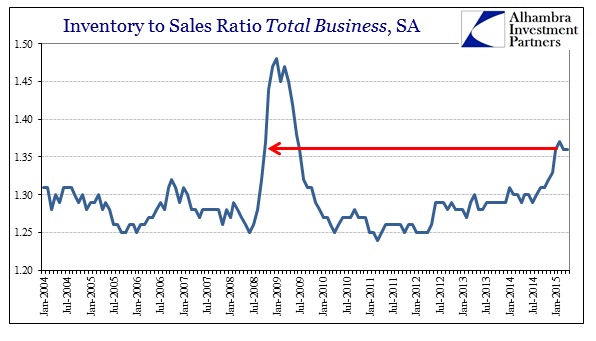 In this case, Total Business inventory sums all three subchannels: retail, wholesale and manufacturing. Where the GDP estimates show an inventory accumulation that hasn’t been seriously challenged for about a year and a half, that trend may have at least been supported by even lackluster sales growth (especially since the 2012 slowdown) but only until October or November 2014. Since then, inventory is still gaining if at a slowing pace while sales have fallen, and in many cases precipitously. Since inventory amounts to an economic plugline, minor variations in sales do not and probably should not alter inventory and thus production. However, the longer the accumulated downtrend in sales, the more businesses throughout the supply have to hold unsold items, the greater the chance of reaching beyond saturation.

The “cycle” view on business inventory shown above seems to hold that premise all too well. However, if you take a broader view of inventory overall going back more than two decades, this most recent buildup is so out of character it violates not just cyclical sense recently but actually challenges convention about inventory in the economic structure. 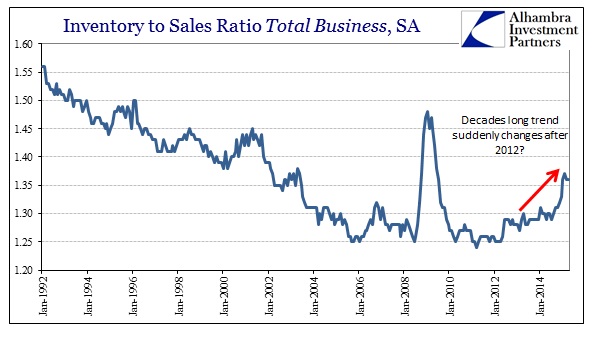 For decades, predating the Census Bureau’s inventory data series, technology and information processing and communication capability have reduced the overall hold of inventory. Just-in-time and more rapid and responsible logistics made the financial burden of inventory the primary factor in accumulation. That all seems to have changed around 2012.

Since that time, as you can see immediately above, suddenly American businesses in the aggregate have started holding greater levels of inventory without any apparent reason for doing so. This flies directly in the face of convention, which, I think, makes this latest inventory build all that more potentially dangerous and depressive. If businesses, particularly at the top end retail, were growing more and more optimistic about the sales outlook and were actually experiencing at least something close to that in terms of rapid turnover, then the past few years of inventory trends might signal that the supply chain were responding to the best case scenario.

That does not in any way, however, describe current circumstances. Sales across the supply chain are decelerating and, in far too many cases, actually contracting. For total inventory in the US to accumulate as a complete break with a multi-decade trend is quite significant. I think this is as good as evidence as any as to the deleterious impact of QE and intended monetary psychology, as there may be some influence on businesses to produce and hold inventory but without any ultimate satiation in terms of sales. In other words, it does appear to be a massive enough inventory accumulation taking place under the false promises of a recovery that has never appeared – and now gone the wrong way.

In short, the economy-wide negative turn is far too consistent to ignore or hold to the idea that this is an anomaly: