At first glance, the TIC view of the global “dollar” short was quite placid in April. That makes some sense given that the March 2015 FOMC meeting has been established as a durable inflection in the outward projection of “dollar” funding. The flow direction, at least among what are listed as “private” sources, would seem to conform to that interpretation. As a starting point, then, there is little to arouse suspicion. 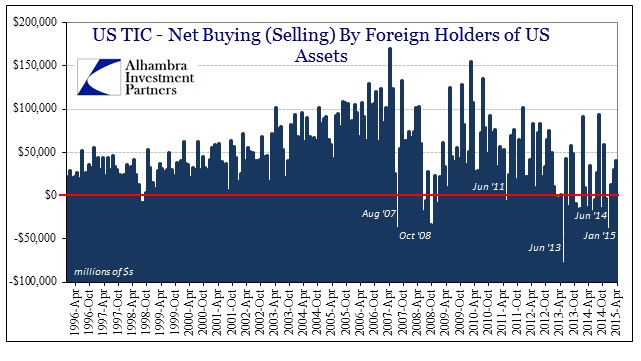 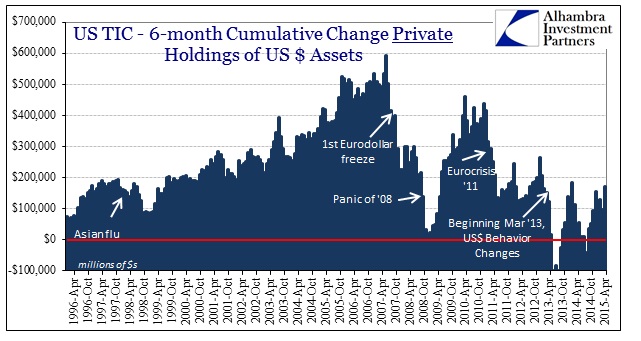 While private “flows” are nowhere near pre-crisis accumulations in 2015, they clearly aren’t as bad as the disruption into mid-year last year or the massive taper hole of 2013. But private flows may be too ambiguous, combining too many irrelevant perspectives in isolation of the “dollar” more directly. In other words, it seems to matter where private flows are taking place, as not all uses and dispositions of US assets conform to the wholesale identity.

Further, the complication of central bank activities into the “dollar” market globally more than suggests continued disruption or at least decay. Official UST “sales” have never been greater on a cumulative basis; not in any of the outward crisis disruptions including 2008! Total official selling (which amounts to a mobilization of “reserves”) has continued for 6 consecutive months for the first time since the eight months starting with July 2008. In UST securities alone, central bank mobilization has continued for eight consecutive months, growing more drastic with each. 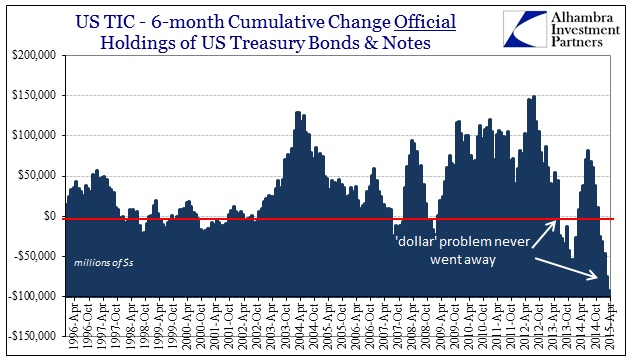 There are some serious central bank activities “supplying” “dollars” into the market just maintain the outward appearance of calm and order. Worse, the categorization by national affiliation provided by TIC does not suggest an easy answer as to who or where. As noted at the outset, that isn’t necessarily surprising given that the “dollar” worsened into the middle of March, but in these official flows there was no relenting in April, either, contrary to that expectation set by the private flow figures. The usual suspects continue on mostly as they have been since the middle of 2013. 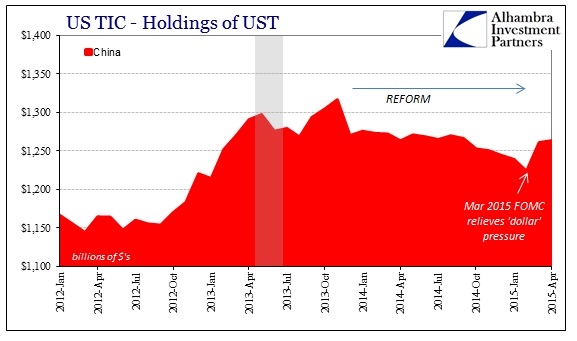 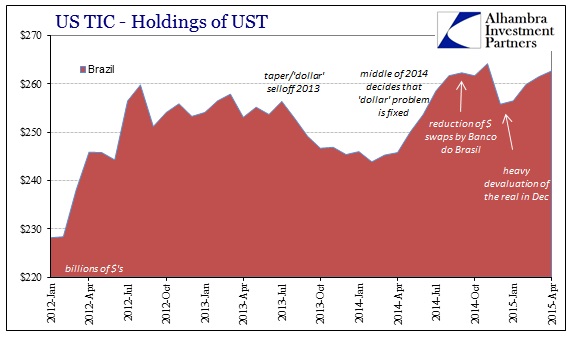 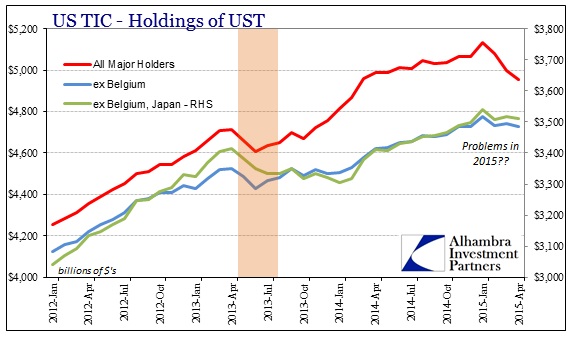 Only Belgium and collateral placed at Euroclear shows any significant change in April, and that may itself be insignificant in terms of locating actual “dollar” disruption. As in the chart immediately above, it may be that central banks more widespread are being active in 2015 regardless of the outward “price” of the “dollar” more recently. 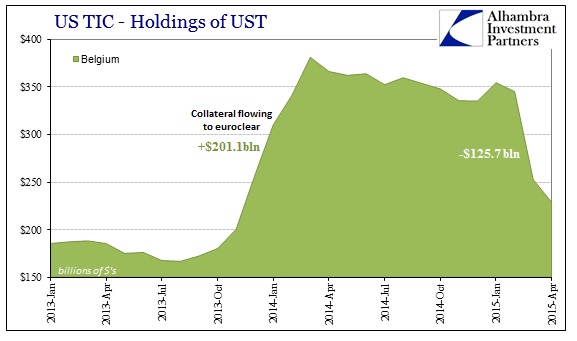 The answer to this mess traces back, as usual, to bank liabilities, and thus bank “supply” of funding to the eurodollar system. Despite variation in month-to-month flow, there is a clear deterioration in the levels of “dollars” being willingly supplied by global banks. That would at least suggest as to why central banks may be so heavily active in trying to fill that gap. 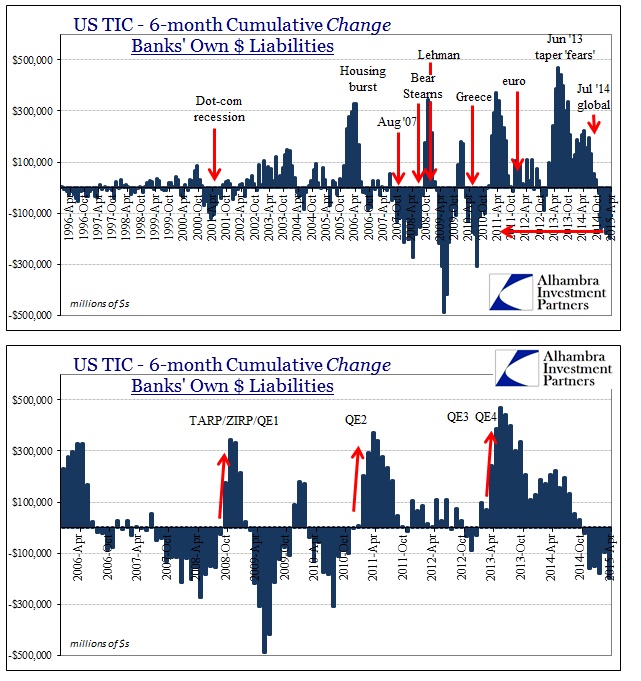 It isn’t as clear in the aggregated totals, but “flows” (essentially netted changes) by month have settled into a very visible quarterly pattern – heavy “outflow” in the final month of each quarter balanced in part or in full by an “inflow” in the first month of the next quarter. That would mean the relevant comparison for April is not with March but rather January (and October). The “rebalance” of positive net reported liabilities in April was just +$70.5 billion, compared to +$126 billion in January and +$173 billion in October. 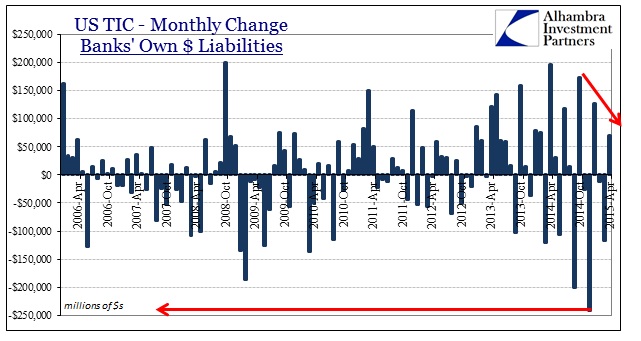 Even though March’s “outflow” was only -$116 billion compared to -$241 billion in December, the lack of rebalancing “inflow” has left total bank liabilities suspect and probably quite deficient for non-disruptive “dollar” function. Again, I think that explains the reason central banks appear to be so active throughout, as the banking system portion of the “private” segment is breaking down even more in 2015 regardless of the FOMC’s on again/off again intentions.

That would be consistent with the various anecdotes compiled just this year in relation to global banks decrying their own stature inside the eurodollar system. As I noted last week, it isn’t really monetary policy anymore but rather deeper disruption down to the very basic levels of actual financial function – function that banks themselves, once seemingly committed and fastened to the rise of the eurodollar standard, no longer want much to do with it.

Unfortunately, this doesn’t look to be a quiet transition, it certainly has not been so far, as whatever is going to replace bank liabilities in the eurodollar function of the global “dollar short” will not be central banks exclusively, and certainly not for long.

The expectation is that money funds and other in kind nonbank entities are going to absorb the role of “money dealing”, but there is no indication yet as to even how that might work inside the broader eurodollar function let alone whether or not “it” is ready right now. I seriously doubt that money funds will take up the same functions as global “dollar” banks have already retreated from (there is too much intermediation necessary for a money fund to lend or offer liquidity for all trading and “dollar” functions under the eurodollar umbrella), meaning that it won’t be strictly money funds dispersing financial resources more broadly into the global “dollar short.” If there is to be a workable, standalone replacement system in global “dollar” liquidity, money funds might be at the base in place of where dealers once roamed prior to 2008, but they surely won’t be alone in performing all those same tasks.

The problem is obvious with the April TIC figures, namely that eurodollar banks are already moving out where there isn’t anything yet moving in – other than central banks trying to plug a leak that looks more and more a torrent. That was the central objection I had in the first place to expectations for an orderly but deep structural transformation.

In very simple and basic economic terms, banks and dealers are leaving little “supply” for the global system. And even with a global economy teetering toward recession (and maybe even because of this), there is still some significant demand for “dollars” to be met for basic global trade let alone still bubbly speculation. It looks as if that imbalance has grown quite severe since November and especially December 2014, and with the bigger banks further retreating (and still announcing expectations to exit even further and quicker) the “supply” imbalance is being filled, for the time being, by central banks somewhere(s).

Without any other financial parts anywhere close to ready to take up the supply, there can be nothing but continued disruption, perhaps quite serious. This is yet another reminder as to why paradigm shifts are messy; there are enough questions about feasibility, but there are always, always problems of synchronization.