There have been, in the past year, two great inflections in wholesale finance. The first was in late June as the “dollar” began to rise, thus signaling a massive shift in balance sheet mechanics, the modern “money supply” that so confuses economists. That is why they at first enthusiastically embraced the “strong dollar” as that anachronistic interpretation seemed on the surface to confirm the booming economy. Instead, it was the wholesale system’s complete refutation of that idea, as “dollars” became quite scarce in anticipation of what has actually unfolded – a global slump, arranging itself around the contours of what increasingly looks recessionary.

The second reflection was a mirror, in many ways, of that first. The March FOMC meeting was taken very broadly as if the committee members had been shaken from their dream-state of that strong dollar to suddenly recognize the grave systemic danger of the singular object of their affections – projecting normalcy. Some parts of the funding and credit markets, swap spreads (spreads of spreads, actually) and breakevens, respectively, even seemed to bet or at least hedge on the rising potential of a fifth QE, trading in a pattern identical to the summer of 2012.

Since then, Janet Yellen declared her sudden and belated abhorrence (May 6) for asset bubbles at the same time the FOMC’s own expectations for the economy have sunk into renewed depths; shaking the very foundation, assured economic boom, that underpinned the hell-bent narrative toward ending ZIRP in the first place. Given such a contradictory position, and the history of all this in the past year (the anniversary of the “dollar’s” turn is this week), some vital “dollar”-related markets have turned literally limp, unable to discern definitive factors. 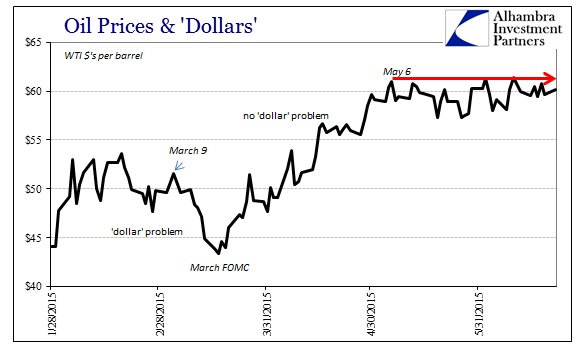 Primary among those proxies is oil. Since Yellen’s hostile declaration for the Fed’s own primary tool, WTI crude prices have taken to little direction, a sideways trade that seems to be the hallmark of these kinds of confused periods. Recall during 2013 and the first half of 2014, right up until the first dollar inflection last year, inflation breakevens refused to budge, tracking similarly sideways for fourteen months. In light of conditions then, and what has happened since, it was a similar sort of contradiction pinning them in place – caught between the growing bearishness of the credit markets (flattening yield curve and falling nominal rates) and economists and policymakers that were increasingly insistent that their view was the only economic view. Not willing to make a hard bet in either direction, balanced by the extreme negativity in the data and the general tendency of mainstream economists to get it all wrong to the point of acting on monetary policy, inflation hedging through TIPS stopped being recognizable as a market. 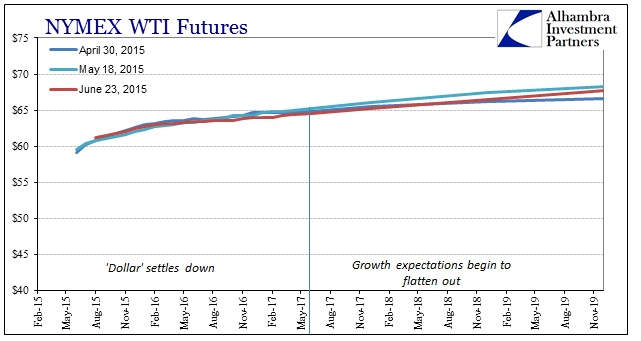 In the case of WTI crude oil, the refusal to bet in one direction or the other extends to the entire futures curve. After moving incredibly flatter (more toward normal backwardation rather than such severe contango) starting on March 18, the futures curve has become an uninteresting view on either the “dollar” or future economic expectations.

If crude oil were alone in setting a lackluster price course, it might be dismissed as the idiosyncrasies of the domestic oil market (of which there are a few), but WTI is joined quite visibly by other “dollar” proxies in the same uncaring lethargy. The Chinese yuan, for example, took the March FOMC meeting and totally banned volatility (figuratively, of course, though who knows how much the stock bubble and the combined PBOC reform has shoved “dollar” funding to the rear). 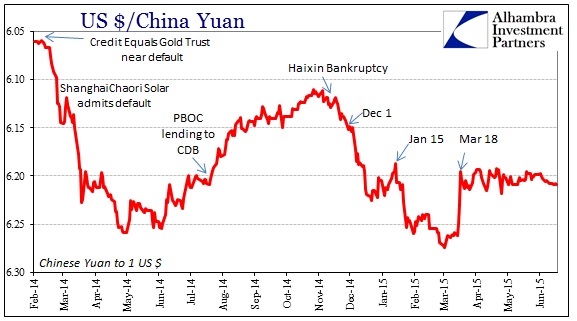 In wider historical context, this flatness is astounding – especially under the clear terms of Chinese reform which was, until Yellen’s relenting, a major factor in the sudden arresting of the prior multi-year yuan appreciation. 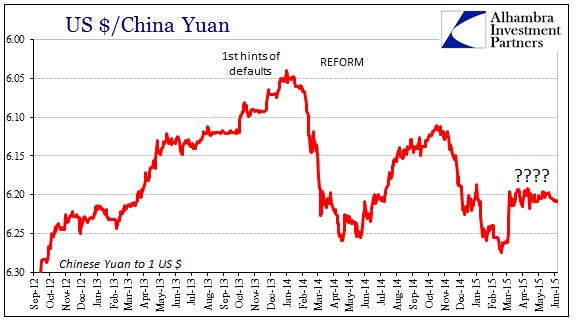 Not only is the yuan taking an odd distaste for ranging trade, even gold has found little to move it to one side or the other dating back to, once more, March 18. That is perhaps even more interesting than the yuan since gold represents a cross-current of two quite extreme trading forces – gold as collateral of last resort (negative on price) and the systemic bid for safety (positive on price). The “dollar” period of the last year would seem to exert both, and at extremes, but to find an almost perfect and stable balance lasting more than three months, with oil and yuan, is odd. 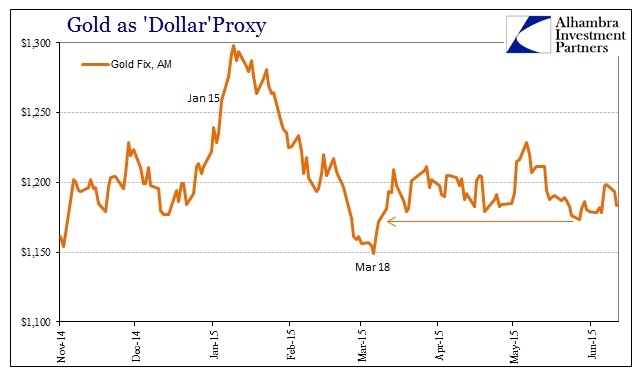 From there, however, the tide slowly turns toward the “rising dollar.” Currency proxies for wholesale funding, such as the Brazilian real and even renewed dis-enthusiasm over the Russian ruble, have been more disturbed since May 6. While those currency crosses have settled (less destructive for the local economies) in the past few weeks, the comforting appreciation in both prior have been clearly and similarly interrupted. 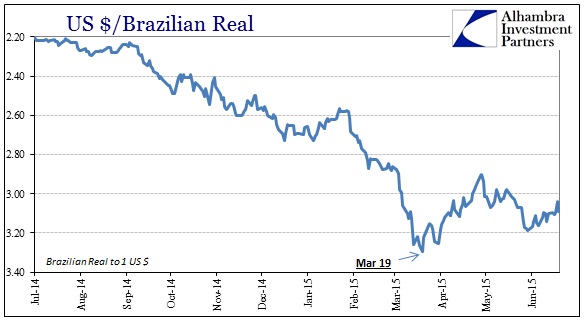 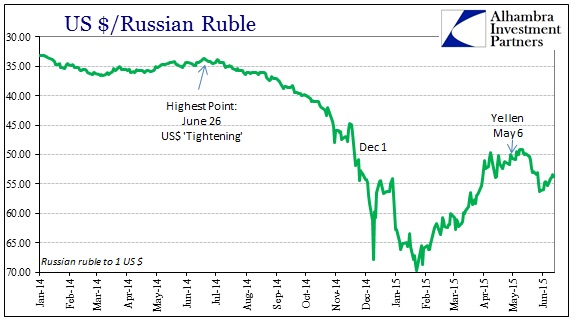 Even the repo market would tend to concur with the expression of the real or ruble, with clear volatility in GC rates from early May forward and then 2 weeks at, near or above 20 bps (for all three classes). That would tend to suggest broad “dollar” disfavor, even if only slight, that sustained for more than a few days (which would be normal under these circumstances). 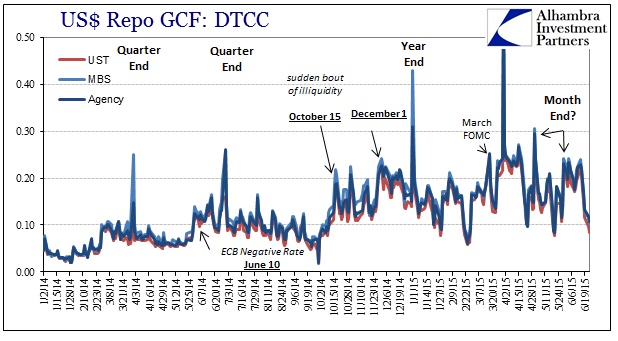 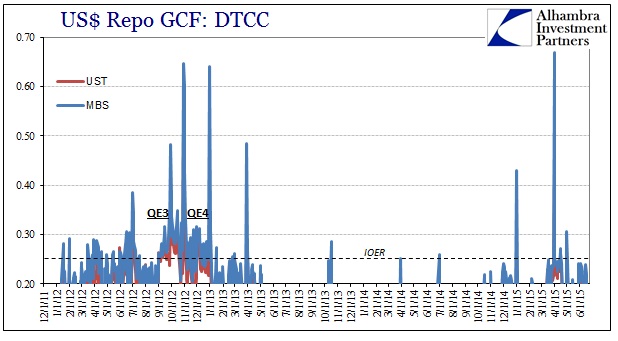 It is copper, however, that perhaps is the decisive view here, which may not be much given that I cited three major proxies above refusing to deliver any verdict in any direction. The turn in copper came a few days after Yellen’s May 6 pronouncements, but the move lacks nothing of conviction. The selling has been hard and nearly uninterrupted to the point that copper is back down perilously close the January lows. 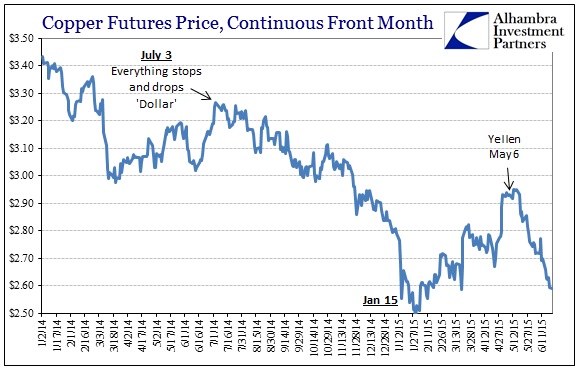 Copper certainly has a monetary component in its price, particularly with Chinese exposure, but more than anything is balanced by physical clearing for actual economic uses. That may be the ultimate determining factor here, as the rest of funding markets are caught between this negative view on the economy but forcefully mindful about what Janet Yellen may or may not do as a serious disruption – copper can be more expressive on the economic side alone. For whatever economic forecasting or fundamental pieces that make up funding markets and the true “dollar” existence of balance sheet “supply”, copper would seem to indicate suddenly renewed bearishness on the global economy – US included.

That leaves the current tally at three important non-decisions (which are, in a way, certainly indicative of at least resistance toward the “everything is awesome again” narrative), three sort of leaning toward repeated problems and one very important, but decisive, renewal. That comprehensive mash seems to be what the generalized view of the dollar is suggesting itself: 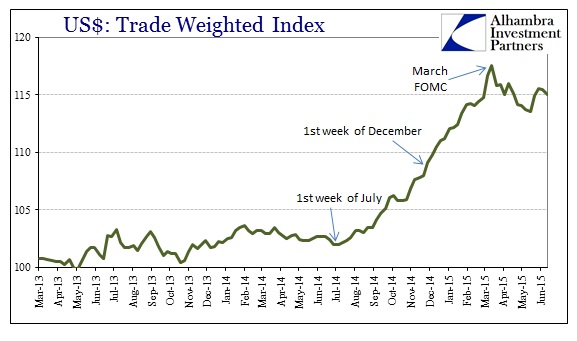