Despite All Theoretical Assurances, Still Toward Contraction

Despite All Theoretical Assurances, Still Toward Contraction

If one were to measure the US economy by what it is, right now, there would be so little growth or activity as to question the actual cycle. In fact, about the only factor that seems to be out of recession is the expectation for the second half of the year (which is already trimmed from the “slump” sticking to just cold weather Q1). In the latest recessionary indications, both exports and imports fell by more than 7% in May! On the export side, that is the worst of this “recovery” period, extending the negative growth for all of 2015 so far with no rebound in sight. For imports, May was the worst since March 2013, but this time with accumulated negativity also stretching for all of 2015 so far.

The common rejoinder, at least for exports, will be the rising dollar as if that were somehow exogenous to these processes. It doesn’t matter what the dollar does or does not do, real production will adjust not based on some intended misdirection or soothing excuse but on especially the accumulating downside of actual activity. Further, if the dollar were anything of a valid argument, along with the idea the US might be growing let alone booming, imports would be surging not sinking on the verge of implosion. 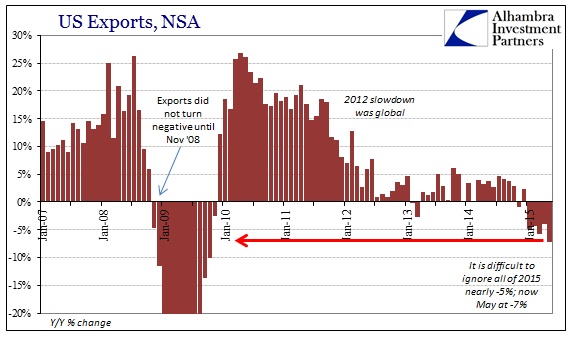 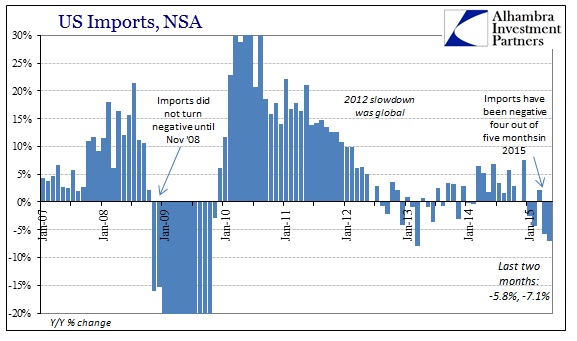 In other words, by these counts, what is taking place is a total systemic downturn rather than discrete or piecemeal problems in isolation. As should be obvious by now, there has been nothing like this except for the Great Recession and the dot-com recession before it. 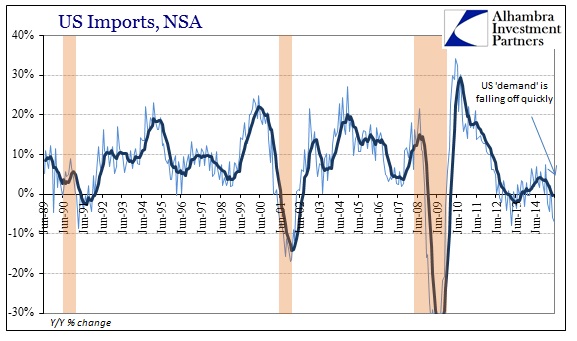 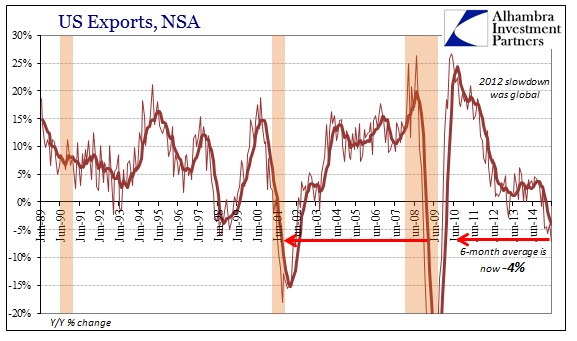 Even the seasonally-adjusted series is starting to demonstrate the futility of equating 2015 with economic growth. With the exception of just one month of imports, March, all of 2015 so far on both sides has been below the worst part of 2014, the much discussed and by now hopefully dismissed Polar Vortex. There may be “residual seasonality” in Q1 GDP, though I, like the BEA, highly doubt it, but there can be no mistaking that even in the preferred mainstream format that the downturn remains and continues to gather. 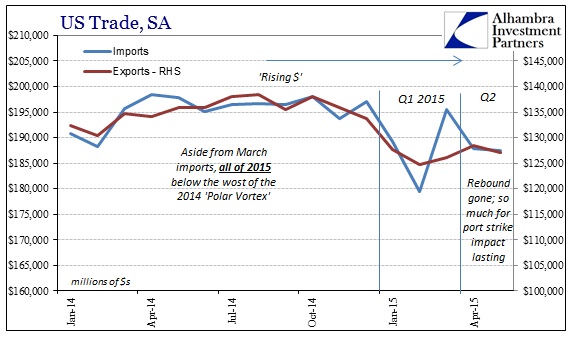 The spring, sometime around April, was supposed to herald, as 2014, some kind of reversion toward the expected pathway for the US economy, one in which the four QE’s and trillions intended to foster “aggregate demand” actually did so. Instead, not only is “demand” down it has again moved toward deceleration, which is quite remarkable given that so much effort aimed squarely at fostering demand, by theory, has yielded not only so little of it but now even that for only brief and unsustainable periods.

That is bad news all over since all recovery ideas have been predicated on the central banking version of it, namely liquidity as primary and meaningful. Instead, true liquidity has gone in the opposite direction as bank “reserves” (not just in the US) and now the US slump continues with more downside risk. That is bad news here but also for ailing economies all over the world depending on economists to actually get this one right for once. The real problem of 2015 is not the usual underperformance, but, as trade activity suggests in concert with almost all consumer figures, that recession is far more realistic than it is taken given orthodox hardening – and that is all before the latest “dollar” disruption. There is absolutely nothing other than economists’ hopes and dreams that suggest the economy is doing anything other than decelerating toward contraction.