For the most part, the concept of leverage is straightforward and intuitive. In physics, a lever is something that multiplies force to gain mechanical advantage. That is why the word was transported to finance as it means to multiply the effort of a small capital base. The “mechanical” force applied in the form of financial leverage used to be borrowed money or currency, but in the modern wholesale format the multiplication attains not only different forms but also added dimensions.

You start with a simple repo transaction where borrowing currency still largely applies. If the haircut is 3%, that simply means, given connections and pedigree (which is vitally important for all this), you can call a prime broker in the morning and buy a treasury bond or some highly-rated agency MBS, and then later some bank repo desk to obtain 97% of the required funds, and by the afternoon settlement you have 33 to 1 leverage after putting up just 3% of the total purchase. In many situations, especially pre-crisis, haircuts were minimal and in some cases not even applied (such as LTCM in the middle 1990’s who received zero initial margins on some of the most complex derivatives trades because of pedigree).

When you move toward derivatives, however, leverage is much more complex and even slightly ephemeral. If you engage in an interest rate swap, for example, you have created an almost synthetic repo. By taking fixed payments (from your counterparty) and paying floating (at whatever spread), you replicate the basic structure of repo (an expensive one, which is why further trades and transactions are added) without having to even factor in a haircut. Typically, all that is put down on IR swaps is some initial collateral based only on the expected contract value variation rather than even a haircut let alone something so much as notional.

In more basic terms, which is where this really needs to remain, not getting too hung up on the complexities and jargon of derivatives and wholesale, leverage in this context is really just a form of fractional lending where the ultimate claim isn’t simply currency or money. I used yesterday the narrative of Primus Guarantee, Ltd., because it was a central figure in the wholesale model in the eurodollar version, supplying balance sheet risk transformations and absorptions to other financial counterparties (and because the CEO and founder was one of the main figures in the development of derivatives as mass produced and standardized). Those risk absorption factors acted as leverage, allowing banks and hedge funds to buy securities and attain traditional leverage far above what they would have otherwise have done without Primus or others like it.

If you look, though, on Primus’ balance sheet you will not find traditional leverage. At the end of 2005 (I use the end of 2005 as it marked the “high point” of wholesale dynamics; actual supply and values increased all the way to the end of 2007 and even into 2008 but the housing bubble had not yet burst so there was, at that point unlike what was to come, no end in sight and the world seemed to correspond so closely to the math), the firm had written protection on 535 single name entities across 40 industries and 25 countries for a total of $13.5 billion. As noted yesterday, most of those of what would be crucial to events happened to be financial firms, all highly rated, due to the counterparties’ needs as they held within the wholesale model. 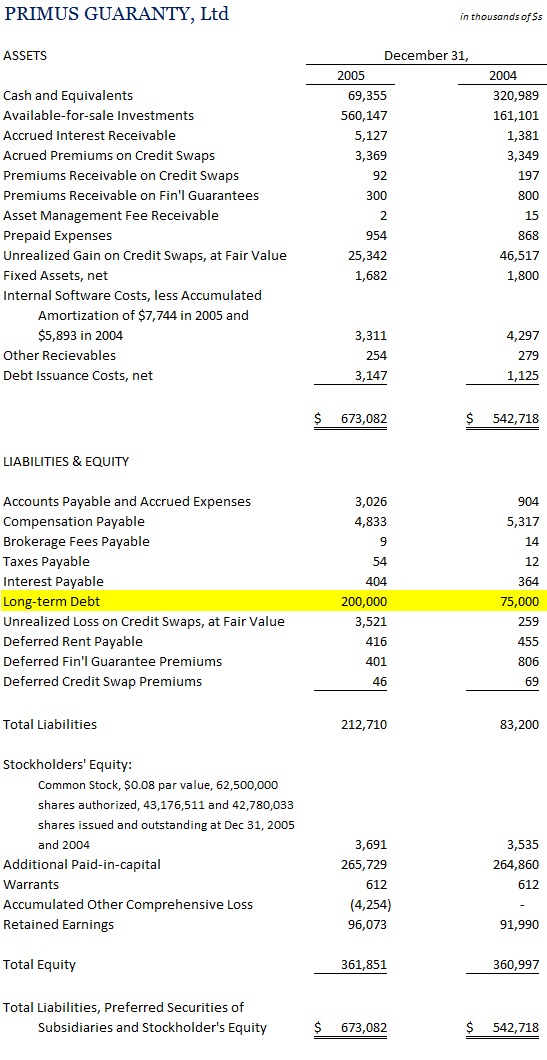 The business was something like an insurance company, where the “guarantees” are all off the balance sheet. Primus only carried $200 billion in long-term debt, no short-term, which meant that those guarantees were potential fractional claims on about $630 billion in cash and investments (which were also at risk). Nowhere does that $13.5 billion appear (which ballooned to $24.3 billion by the time of the panic), yet counterparties were counting on those guarantees as if they were real.

The illusion, unlike the insurance company model, was that the guarantees provided by Primus were not real event payouts, but instrumental in the expansion of wholesale finance by transferring risk; credit default swaps, especially single name, allowed particularly banks to reduce their calculations of “at risk” positions and potential losses. That further allowed them to take on more positions, expanding the “money supply” based on the expected calculation that these CDS hedges would pay if needed. Therefore, the supply of Primus’ cash was only important insofar as it kept up ratings, which was nothing more than probability calculations of whether or not such cash was within those probability bounds.

But even that perspective doesn’t really describe what was going on. Banks during the panic didn’t really want Primus to pay out as that would have meant a dwindling “capital” base upon which all of the rest of the CDS portfolio was based – in fact, that is what happened to the point Primus got shut out of the CDS market entirely when it was downgraded. At that point, the contracts that Primus had written during the runup to 2008 lost their previously expected payout probabilities, and counterparties were then forced not to claim upon default Primus’ cash but rather to mark down the likely (calculated) effectiveness of hedges that weren’t even close to default.

According to Moody’s, the credit profile of Primus Financial’s single name CDS portfolio deteriorated significantly during the fourth quarter of 2008, with exposures rated below investment grade increasing by roughly 40% to $1.6 billion. The firm’s portfolio is heavily exposed to the finance, insurance and real estate sectors, all of which have been severely affected by the current economic crisis. Moody’s noted that the estimated expected loss associated with Primus Financial’s CDS portfolio is roughly equivalent to its equity, indicating that the value of Primus Guaranty’s investment in its subsidiary may be limited to future premium income, which is currently estimated at $280 million, net of operating expenses.

If you understand what Moody’s was saying, even though the company had $23 billion or so in CDS “guarantees” they were only expected to pay out roughly $360 million in “losses.” The real “damage” was only the increased probability that the company may not have enough cash since $1.6 billion of the portfolio moved out of investment grade – not to default, but only into a slightly higher probability of that. The effect of these changes in ratings (really probability calculations) was to increase the figured likelihood that the firm would see its “capital base” wiped out. To Moody’s, that was expressed as further downgrade from Ba3 all the way to B2.

For Primus counterparties, that was the kiss of death as it made CDS hedges nearly worthless or at least ineffective; meaning their positions that were one day valued with hedges were no longer even though no cash moved or was claimed, and certainly not above and beyond Primus’ ability to pay out. The result was an inverse or implosion in wholesale, math-based leverage which meant that counterparties either had to purchase more protection from someone else (there wasn’t anybody at that time left to do so), firesale some assets to regain risk calculation control or take the hit to bank “capital” in the form of OTTI (other-than-temporary-impairment) against retained earnings.  That is why FAS 157 (mark-to-market) is the most likely candidate for ending the conveyor of the panic.

All that reversal, which, in systemic aggregates, totaled trillions and maybe tens of trillions of feared impairments, based not on actual cash payments or cash losses but only on the changing probabilities and calculations embedded within the wholesale structure. As it was, Primus survived the panic with enough financial resources to at least go into liquidation, sending final dividends to shareholders as late as last year on CDS premiums the firm was still collecting (they tried to solicit new capital to restart their business in 2010 but nobody wanted to go back there; eurodollar decay in action). In other words, the payouts on defaults were actually rather minimal for what everyone feared of them; but that was itself a drastic change from before August 2007 when the calculated probability of ever being in that situation was thought trivial or even impossible.

So what was/is leverage here? It is difficult to say and it isn’t contained in any financial statements in any meaningful sense going so far beyond strictly borrowed cash or money, so we know it largely from the situation where it was absent or reversed. In the abstract, it is the traded capacity to take on and transform some element of mathematically “controlled” risk factors. I think that is why Primus’ 2005 10-K filing of its balance sheet is so instructive of this systemic change not just of banking but really of money itself. In that respect, financial statements are simply anachronistic and outdated about activity of what was and remains “money-like.”

That, as much, was apparent going back to Enron and even LTCM, but all that was done about those was to make CEO’s sign under penalty of perjury for their financial statements rather than to actually understand how the current structure of financial statements themselves was/is unsupportive of the world that exists; especially in wholesale finance. Even now, in 2015, bank SEC filings are nearly worthless in terms of describing what and how a bank actually does what it does (and that criticism doesn’t even apply to window dressing behavior and thus actual, real bottlenecks).

That wasn’t just the shortcoming of financial statements but also of policy. The FOMC really did think in terms of balance sheets as they were presented rather than what was far more important away from them. The people who still claim to be able to control the economy through financial inputs have no idea about the way in which financial inputs are achieved; and are then somehow surprised when the economy does not act as modeled. What good is bank “reserves” policy in this situation, or any situation of the same schematic?

Leverage as a financial concept has been radically transformed by money evolution. Even now, seven years after crisis first erupted, we struggle to comprehensively recognize and transcribe what actually happened (“toxic assets” doesn’t even begin to explain). The real danger of being so far behind isn’t just being vulnerable to repeat, but more importantly in how all of this has surely still evolved further, creating new dimensions that we can’t yet even fathom. That is, perhaps, the worst part of wholesale leverage, as if I am right about the lack of concrete description then we won’t really know the new format and elements until they, too, go missing. At least at that point we can be quite assured of two things: that financial statements will still be useless and that the FOMC will still be using them.