IMF Cuts But Refuses To See

IMF Cuts But Refuses To See

When the IMF released its semi-annual World Economic Outlook in April, it was still caught up in the GDP/Establishment Survey frenzy of late 2014. Despite the fact that Q1 GDP was certain to be negative by the time of publication, the IMF was wholly undeterred preferring instead to view the US as still the global engine and hope. They even went so far as to upgrade their projections for 2015 slightly. Their narrative about the US economy, again in April 2015, was clear:

While preliminary statistics indicate that global growth in the second half of 2014 was broadly in line with the October 2014 projections (Figure 1.1), these broad numbers masked marked growth surprises pointing to more divergence among major economies, with the U.S. recovery stronger than expected, but economic performance in many other parts of the world falling short of expectations.

Growth in the United States was stronger than expected, averaging about 4 percent annualized in the last three quarters of 2014. Consumption—the main engine of growth—has benefited from steady job creation and income growth, lower oil prices, and improved consumer confidence. The unemployment rate declined to 5.5 percent in February, more than 1 percentage point below its level of a year ago.

That was largely the same message as was repeated over and over by Janet Yellen and her FOMC (though even they had primarily stopped giving it with such unbridled gusto by the March 2015 FOMC meeting). GDP and the unemployment rate were the only way to view the economy despite so many other indications otherwise. It was still, at that time, where the “strong dollar” and lower oil prices were going to be huge boosts to an already robust expansion. In other words, it were these statistics alone that “proved” the US economy was on its way to erasing those more widely encompassing doubts – including that the unemployment rate was being driven quickly lower by the apparent and steadfast refusal of US labor to participate.

In many ways, the current forecasts mirror those from late 2007, at least in terms of category errors if not magnitude. While there was great financial strain becoming apparent by the second of that year’s WEO, the IMF grew only measured in its outlook but no less optimistic about how little the “slump” would last.

Still, the situation at present is one with threats rather than actual major negative outcomes on macroeconomic aggregates. At this point, we expect global growth to slow in 2008, but remain at a buoyant pace…

The good news is that emerging market and developing countries weathered the recent financial storm and are providing the basis for strong global growth in 2008.

The situation now is reversed in that advanced economies are, especially the US, supposed to pick up the slack from emerging nations struggling under some apparently unknown strain. In 2007, the ultimate downside projection was just as unknown, as the IMF admitted straight away that they had no idea what the eurodollar system actually was:

We expect some slowing in Japan, where the second quarter was disappointing, and in Europe, where banks were involved to a surprising degree with instruments and vehicles exposed to the U.S. subprime sector.

Even here, the recognition of ignorance falls far short of what had really happened from 1995 through 2007; it wasn’t just “instruments and vehicles exposed to the U.S. subprime sector” it was an adherence to total eurodollar saturation which glued the US economy to the European economy, thus sinking the whole of even emerging market economies under “unexpected” financial turbulence. Bear Stearns, which orthodox economists took as the worst of it, was just the end point of the first phase that stressed how more local factors were merging into systemic, sustained disharmony of both finance and economy. 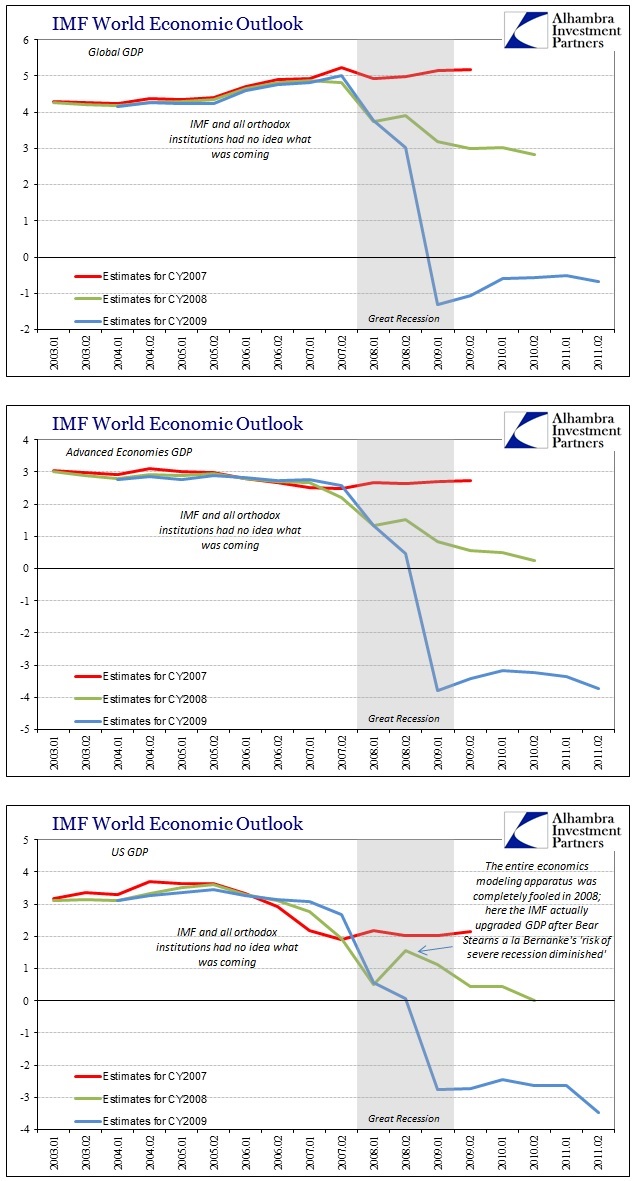 That limitation and obliviousness has, of course, “somehow” continued throughout this cycle despite all open observations that the eurodollar system is irreparable. Economists and their models keep forecasting a sharp and sustained return to pre-crisis levels of growth simply because pre-crisis levels of growth were what they were; no appreciation, or at least very limited appreciation, of what was driving global and domestic growth in that age. Aggregate demand is simply taken as that, without ever subjecting trends and consistency to even common sense terms about what is driving what and why.

To be sure, economists were ready to accept that the recovery might be slow, at first. Their projections incorporated a slower incline toward potential than what may have been expected without an “unexpected” financial “shock”, but by 2012 and especially 2013 growth was projected to be right back on track. Except, like 2007, none of them predicted, or even now appreciate, that the world economy would again slow in 2012. Not only was it a noticeable downturn in growth, it has persisted for now going on three years (what I maintain is an elongated cycle “peak”). 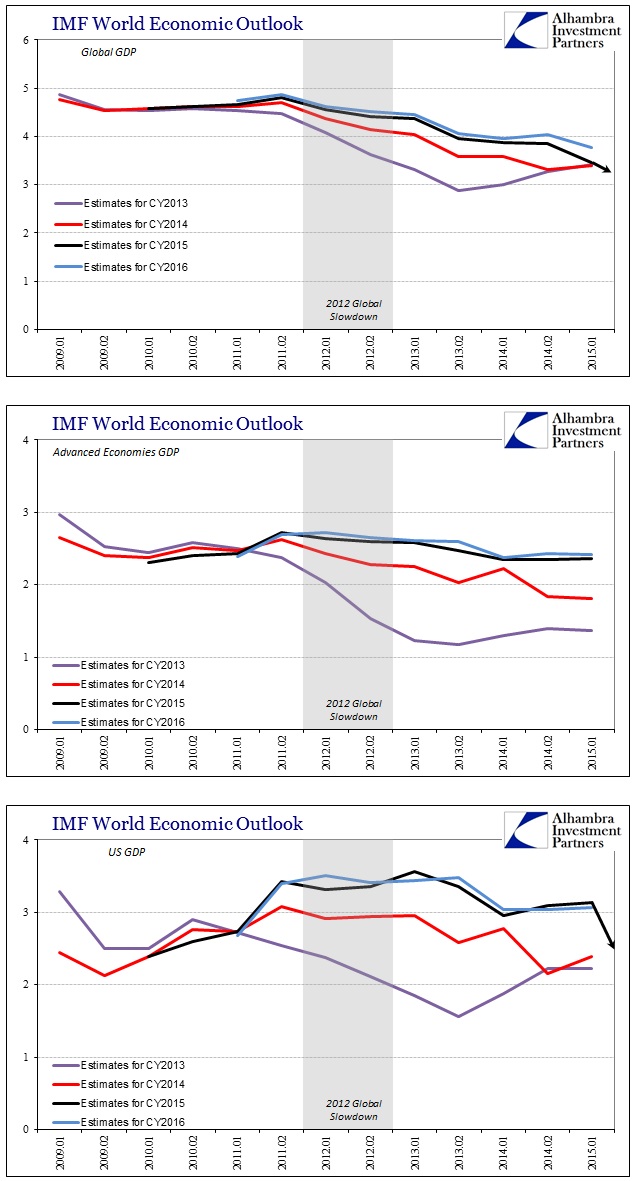 For global GDP, that has meant, only so far, a subtraction of about 1% to 1.5% from the baseline track. For advanced economies and the US, the IMF only has taken into account what has already underperformed but is still projecting for 2015 and 2016 that return to trend. At least, it was until the IMF today cut its 2015 US GDP estimates (as well as for the rest of the globe) down to 2.5%, which is still quite optimistic given other orthodox models of similar construction (the FOMC’s “central tendency” estimate for 2015 is just 1.8% to 2.0%).

That isn’t the worst part of this downgrade, however, as the basis for even that diminished economy is so very tenuous. Not only are they not factoring the eurodollar standard, again, as it actually exists toward permanent and maybe accelerating decay, the only economic factors that provide a basis for any hope in the second half are the same phantoms that have done nothing for 2015 so far.

Much of the global downgrade was driven by the U.S., which the fund now sees growing 2.5 percent this year, compared with 3.1 percent in April. The IMF this week reiterated its recommendation that the Federal Reserve hold off raising interest rates until the first half of next year, when wage and price inflation are expected to pick up.

The IMF characterized the U.S. setback as “temporary,” saying the world’s biggest economy remains poised for an acceleration of consumption and investment as wages rise and employers hire workers.

Setting aside the obvious consistency in how the “setback” is supposedly “temporary” and yet they don’t want the Fed to raise rates, the failed narrative is much deeper.  In other words, the US was supposed to be the grand support for the global economy, but now is not – but it will, as “acceleration of consumption and investment” because of only the Establishment Survey view. We are, then, the world, in quite serious trouble if the BLS’s main indicator is more statistical fancy than reality.

In noting two days ago the continued and serious contraction in US import activity, the mechanism for the assumed acceleration in US “demand” to be transmitted by that “strong dollar” to the buoy the rest of the world economy, almost every economic indicator was so highly negative that economists were really starting to stretch their rationales dangerously thin.

Instead, true liquidity has gone in the opposite direction as bank “reserves” (not just in the US) and now the US slump continues with more downside risk. That is bad news here but also for ailing economies all over the world depending on economists to actually get this one right for once. The real problem of 2015 is not the usual underperformance, but, as trade activity suggests in concert with almost all consumer figures, that recession is far more realistic than it is taken given orthodox hardening – and that is all before the latest “dollar” disruption. There is absolutely nothing other than economists’ hopes and dreams that suggest the economy is doing anything other than decelerating toward contraction.

The IMF updates here provide that in a moment of rare clarity, both confirmed misunderstanding of the “dollar” and its role in the global system as well as that the highly dubious Establishment Survey is all that there is left of such prior “unquestionable” strength that survived as far as April before being overwhelmed and mugged by negativity that wasn’t supposed to be even possible (again). Perhaps that is most visible in their related estimates for US “inflation”, expecting in the second 2014 WEO for the Fed to finally, after three years and two additional QE’s, to hit its inflation target (they actually upgraded US inflation expectations while oil prices were already starting to fall, from 1.60% to 2.12%!). From 2% to 0% in a matter of months is about par for the course here. 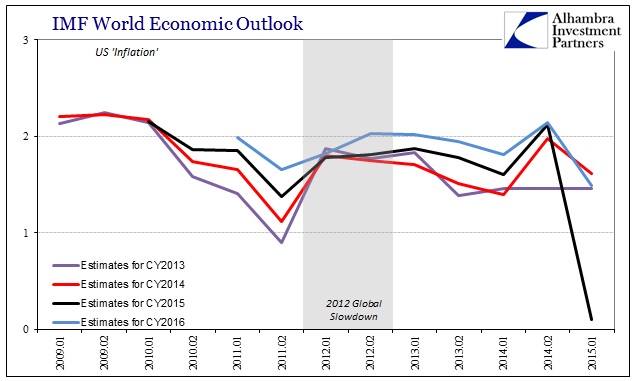 What is important about all this is not that orthodox economics continues to prove that it is incapable of economic forecasting, as this is far more serious than their regressions are off by a few variables and correlations. Rather because they understand neither the actual economy (aggregate demand as a concept can only make sense for math and models, highly stylized at that, not in actual operation) nor the “dollar” and its role in it, the math will always be garbage in/garbage out. That is worrisome itself but more so because the eurodollar operation isn’t exactly hidden; it is open for dissection with just a little effort. In other words, the IMF, the Fed and all the rest are curiously incurious, which is, again, an unmistakable sign of rigid ideology rather than science or even objective and serious inquiry. 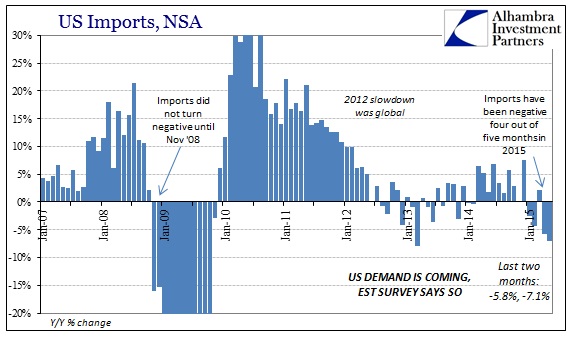