With a lull in Greek information and general craziness, as well as China essentially shutting down its stock exchange (no longer much as far as exchange) “dollar” pressure has abated. That is obvious in the treasury market which has seen a retracement in yields without collateral calls, but also somewhat in the related commodities. Copper prices are back up to $2.55 though, prominently, that isn’t really much of a rebound. Crude, too, remains unimpressive despite liquidations clearly easing.

There are more fundamental factors to consider, of course, beyond simply the “dollar”, but recent indications have not been kind as far as optimism. Where near-term expectations remain muted if slightly hopeful, the intermediate outlook has been almost uniformly trending toward ultimate and saving deliverance. That has slowly unworked recently, not coincidentally, I think, in parallel to both this latest “dollar” outburst as well as the general downgrade in estimates, tone and almost anything of the economy of late.

In other words, global growth expectations are starting to dig in about a greater and growing possibility of something protracted rather than “transitory.” That seems to me what the futures curve for WTI suggests in both lower prices and a flatter contango especially when compared to the initial crash of late last year and the early part of this year. 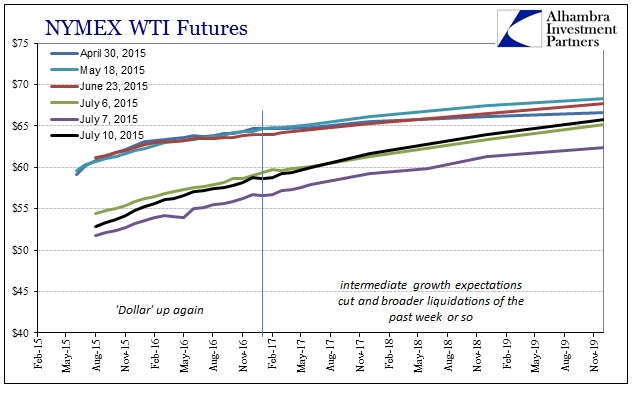 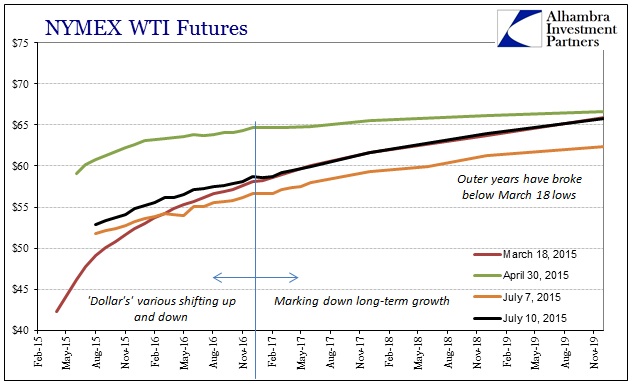 The front end of the curve is going to be capricious as most exposed to the financial ends, but in the past few weeks it is the middle of the curve that has been more drawn into the maelstrom of volatility. Futures prices for 2016 were somewhat to be disturbed, but now 2017 and even 2018 futures are moving decidedly in tandem with the front end.

I think there was some good confirmation of that interpretation today as the IEA once more cut its estimates for global demand in 2016:

That isn’t a huge drop in expectations, but it isn’t the first either. In other words, the “market” is beginning to see the trend and it’s not at all like the “transitory” language that has been somewhat assuring of the steeper contango positions of earlier this year during the “dollar” pause. In growth terms, for the whole world as well as the US, the probability of more than just an anomaly due to some kind of seasonal and repeated funk is rising steadily and, in some cases, quickly. 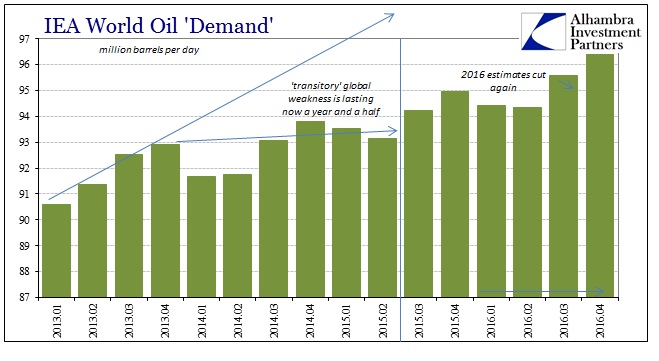 The sharp rebound which was supposed to be continuous starting in Q3 this year is now interrupted yet again by lingering problems into next year. So the general and huge recovery is pushed out all the way to the second half of 2016, which suggests as a best case that demand and supply may not really align again until 2017 at the earliest– again, that seems to agree with the futures curve. However, the broader volatility is starting to advise, as noted above, that while these may be the baseline estimates (from orthodox economics) the confidence in them isn’t nearly as solid as before. That is, in reality, a clear downgrade to economic probabilities which seems to be the theme of late.

What was supposed to be transitory weakness of the Polar Vortex of 2014 has now lasted a year and a half and is yet to be assured as having passed. If these figures prove even close, then global oil demand has barely risen above Q4 2013 levels (suggesting once more, inarguably, that it wasn’t supply that surprised the oil market and the “dollar” back in the middle of last year) and is down 660k barrels since the end of 2014. That may not sound like much, but oil demand is supposed and expected to rise steadily, so any setback is more than purely what is counted in subtraction. By way of comparison, BP estimates that global demand for oil fell only 1.63 million bpd through the whole of the Great Recession from 2007 to the end of 2009! 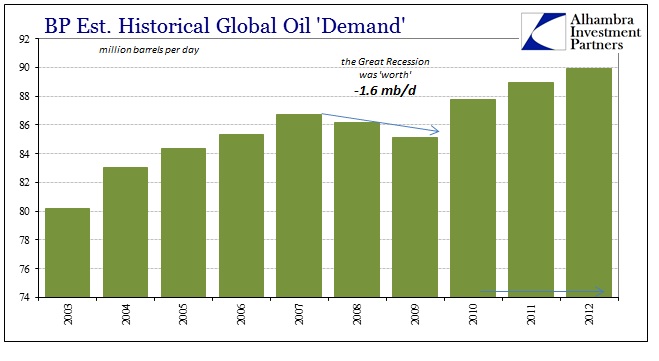 In other words, these disturbances in demand (again, demand) are substantial and, as the market seems to be coming to terms with, lingering. The global economy is clearly struggling and the hole is getting wider and deeper; transitory as a qualifier is barely even used anymore, and the idea of “record supply” being the disruptive price setting has quietly stopped altogether. Like Janet Yellen’s speech, these are themselves significant if implicit downgrades to the global economy.