With all the problems right now beyond Greece and China, from Canada’s “puzzling” recession to Brazil’s unfolding disaster, and even the still-“shocking” US economic slump, it is interesting that gold garnered the most attention in early Monday trading. The fact that gold prices were slammed in Asian trading was certainly significant, but that really isn’t why gold is being highlighted all over the world. With gold prices at a five-year low, economists have some “market” indication that finally, they think, is moving in their favor, thus distracting, minutely, from all the global conflagration.

“We have breached significant support levels, we know U.S. rate hikes are coming, there is no inflation and there is no catalyst to hold gold when other markets are doing better,” Societe Generale analyst Robin Bhar said.

It is far more indirect than in 2013 when economists were positively crowing about the slams in gold, but the same basic setup remains even if almost coded; “U.S. rate hikes” are supposed to occur when the FOMC judges the US economy, and the globe by extension, quite sufficient so the drastic fall in gold is once more an indication, though indirect this time, that all will be well soon enough. You would think that after being so wrong about gold in 2013 that economists would be far more careful about appealing in that direction, and maybe they are since they have so far remained, as noted above, more muted than openly projecting great economic recovery with low gold prices this time. 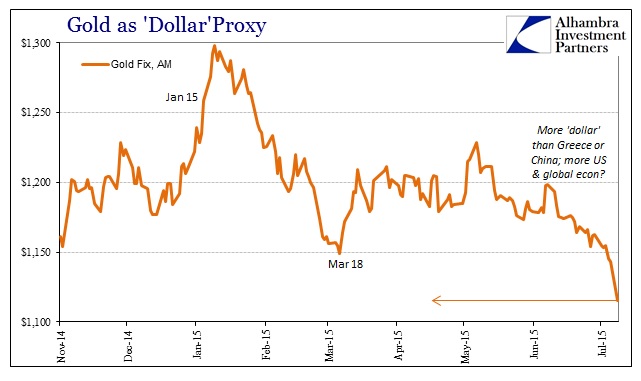 That may itself be significant, in that while economists remain gold haters (literally) they aren’t, contra two years ago, declaring decisively its death as evidence of at the same time central bank omniscience. Of course, gold prices are not limited to simple-minded appeals upon interest rates or even differentials, as clearly mainstream commentary continues to have great trouble with gold behavior in any direction.

The exact reason for the selling was unclear. Recent strength in the U.S. currency and expectations for higher U.S. rates have undermined the case for holding gold and other precious metals, while analysts also noted that China imported a record volume of gold in 2013 that has created an oversupply situation. Still, the swiftness of the decline surprised traders and resulted in two separate trade halts in U.S. gold futures.

Again, 2013 provides a guide as to why gold prices may be declining in sharp moves, especially right at the open or in weaker trading hours, and it has very little to do with interest rates apart from fixed income suggesting the same factors about the “dollar.” Whether it is growing unease about the global economic picture or the “sudden” recurrence of financial irregularity almost wherever you wish to gaze, the “dollar” is once more wreaking havoc. This isn’t controversial at all, but somehow economists can miss that gold is global and universal collateral and when the eurodollar system is stressed it becomes activated in that manner. The correlations alone are strongly suggestive of these financial factors. 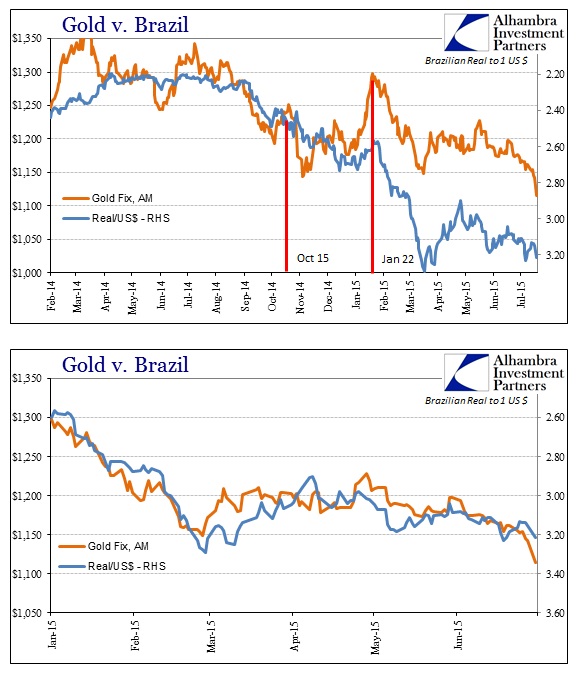 The relationship between gold and the real, for instance, is quite indicative of eurodollar financing trends. Apart from the sharp rise in gold just before the January 15 franc event, gold and the real have been almost inseparable in both timing and degree.

The damage extends beyond that affiliation, however, as the “dollar” (bank balance sheet factors) is again moving quickly. Copper has been pushed back under $2.50 and crude oil, at least at WTI spot, is nearly back into the $40’s again for the first time in months (despite recent drawdowns in both inventory and production). 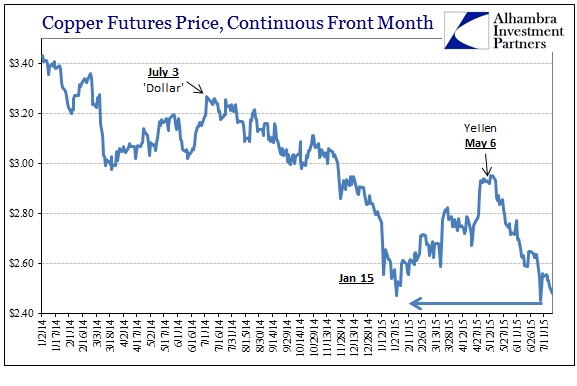 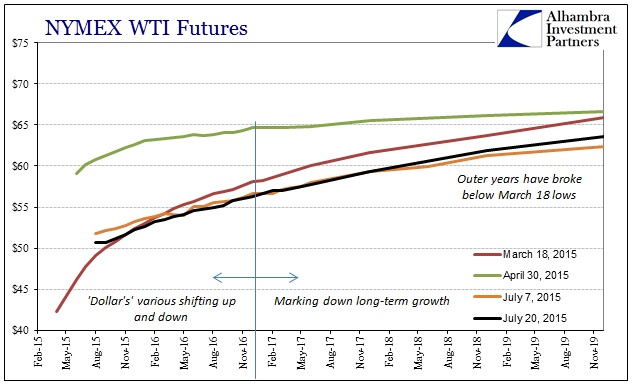 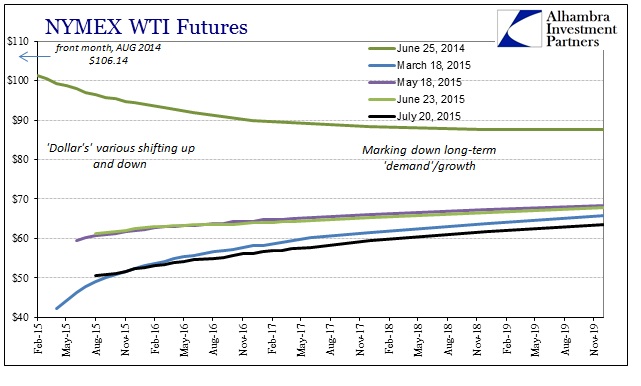 In other words, there was a brief respite once Greece slipped on its noose and the Chinese rewrote their stock market, but that short enthusiasm hasn’t at all disrupted the renewed wholesale retreat. Since early to mid-May, the “dollar” has been spotty in its effects, but those negative pressures have clearly started to unify into renewed irregularity in late June and early July. In that respect, Greece and China may have just been visible sideshows of all that. 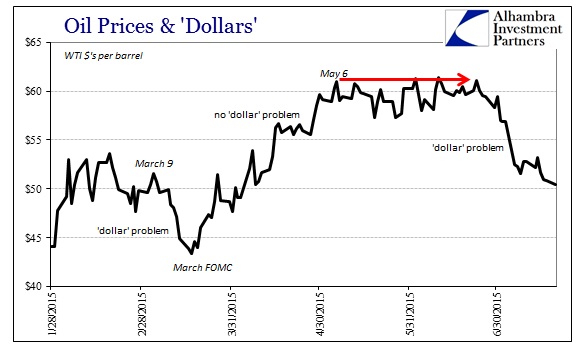 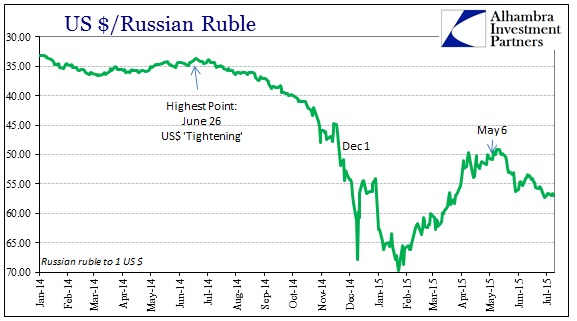 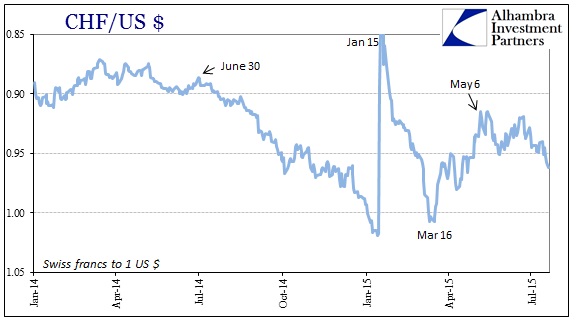 Even the Swiss franc has found its way below 0.963, a low not posted since April. The catalyst may be the FOMC’s increased publicity about its preferred intentions to get “markets” to reflect the recovery and economy that isn’t there, but even that is rather unclear as eurodollar futures aren’t really anymore suggestive of that potential then they were back in March. 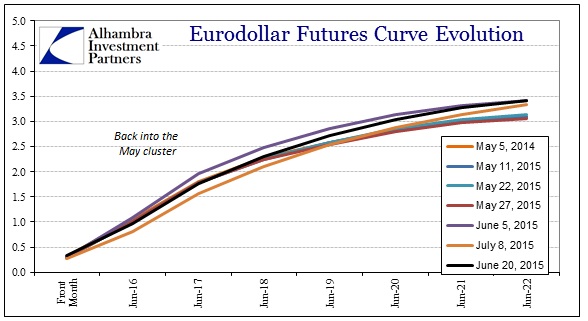 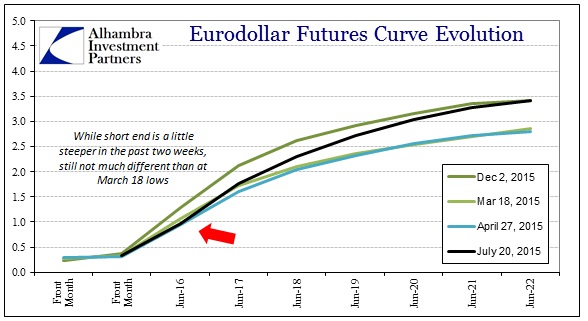 The futures curve had sunk to an unusual level in early July (maybe that was Greece), so recent trading has simply pushed the curve back into the same cluster as dominated in May. In other words, it doesn’t appear, and certainly not decisive, that “higher U.S. interest rates” is actually being predicted here, rendering the mainstream ideas about gold once more grasping at straws.

In my view, the “dollar’s” destructive tendencies here are more primal rather than exclusively policy-specific. I think in this accumulated view these “dollar” proxies suggest that regardless of the FOMC’s stated tendencies there is already more than a fair amount of volatility and disorder evident not just in these markets but in the global economy (“unexpected” only to economists). Thus, any perceptions about the FOMC raising rates (whatever they think they can) is just another element of amplification of that existing and underlying syndrome and distress.

The initial “dollar” behavior after the March FOMC meeting strengthens that reading as I think it amounted to not better fortune but rather just some less distant hope that the without a suicidal FOMC “dollar” pressures might on their own ease and abate – that without a forced policy shift the underlying torment might be able to in shorter order resume more stable behavior and existence free from further depressive influence. The “dollar” and fixed income world had grown so bearish especially after December 1 that it was due for at least a minor retracement on even the most marginal of hope. I really believe that was the animating factor of credit and “dollars” out of 2013; that gold correctly predicted growing eurodollar problems that were parallel and related to fomenting economic decay. The FOMC’s role was simply to further antagonize those concerns, which they did repeatedly on the flimsiest of narratives.

Yellen’s May 6 speech about stock bubbles and “reach for yield” was thus damaging in that respect; that the FOMC was instead going to push on with its amplification of negative pressure and send the world further into its tailspin regardless of how much discontent and disquiet was already evident.

The action in gold in 2013 was a warning about the “dollar”, a warning that went completely unheeded yet has been largely fulfilled. Current gold prices and the rest of the “dollar’s” proxies are, if only in smaller doses this time, suggesting the same tendency. In short, while the magnitude might be diminished now that is only because the time component is so much shorter and the “wavelength” so much more widespread; the point of no-return may be at hand or already surpassed.