The Politics of Wages

The Politics of Wages

Last week, the Economist published an article ostensibly about the politics of wages. Earned income has become a populist football, apparently, with both political parties jockeying to take the most inane and fallible positions about the economy. As with the midterm elections last fall, the fact that this is in any way still a major political issue more than suggests how “economics” is way off kilter – yet it still dominates as politicians on both sides rarely deviate from orthodoxy (Bernie Sanders’ open questioning recently of the usefulness of the employment rate is the prime exception).

This is curious only insofar as “science” is supposed to be the backdrop for all of this. The same article opens with a rather startling calculation:

Ms Clinton says her economic priority is to raise wages. That is welcome. The real median household income is lower than in 1996 (see chart). Wage growth, says Ms Clinton, is the best barometer of economic success. In a dig at Jeb Bush, a Republican frontrunner who wants to raise the country’s growth rate to 4% per year, Ms Clinton said boosting wages is better than an “arbitrary” growth target¬¬—especially when the link between GDP and wages has been weak since the recession.

There should be torches and pitchforks, amassed mobs of the disaffected continuously descending upon Washington based on that third sentence – adjusting for currency, badly, “real median household income is lower than in 1996”! The federal government and its clans have appropriated ownership of the economy in ways not seen since the 1960’s or even the early 1930’s; and the results should speak for themselves but do not as complacency still reigns on the surface.

The chart that accompanies that description demonstrates largely the same deficiency as what you see of full-time employment. That is not unexpected. What is criminal is how this continues to be the foreseeable future as nobody seems to have any desire to finally and definitively put two and two together. Even the Economist, in the course of decrying decrepit wages, cannot allow itself the rightful perspective outside of the orthodox con.

More growth, she [Hillary Clinton] explained, will create jobs and force firms to compete more aggressively for workers, which should bid up wages. Yet she omitted to mention that the kind of demand management necessary to tighten the labour market is usually the domain of the Federal Reserve. The Fed must steer the labour market back to equilibrium—and no further, lest inflation surge. A presidential plan to boost wages cannot rest on a tight labour market.

Reading that passage you would be forgiven if you thought that the Federal Reserve has been largely absent this entire time. That is, of course, a common frame for most of the commentary about central banking since 2007; it only existed “heroically” in saving the world during the repeated disasters. You would at least expect that the public would be minimally aware that those disasters were both believed and claimed impossible by the same central bankers that also believed and claimed they had the power to prevent or stop them in the first place. Misunderstanding the economy and “money” is inseparable from all of this.

The labor setup in the quote above is half right – the labor market is the domain of monetary policy but only in the past few decades. Alan Greenspan’s engineering experimentations, amounting to a soft form of central planning, has been active and dominating since the early 1990’s with its offshoot eurodollar operation (of which the Fed never figured out, preferring instead to believe its own brand of GDP-genius). The entire mainstream strain of both economics and politics (in the 19th century this was understood to be redundant terminology) would have you believe it is total and unrelated coincidence that median income has reverted to levels of the middle of the Clinton administration at the same time central banks went beyond claiming to “fill in the troughs without shaving off the peaks” to actually trying to do so.

As has been also clear from Japan’s descent into QQE, the real evidence of monetary policy effects are in the damage they leave behind. Greenspan’s efforts, and the attendant eurodollar rise, occurred in the late 1990’s leading to both serial asset bubbles (globally) and an employment problem that without those asset bubbles begins to represent a full depression. No healthy economy would, on its own, act in that way for more than a few years (at most). The only manner by which such a gangrenous infection might linger for more than a decade and a half (like Japan) is when the only “solution” offered is the same as feeds the cancer in the first place.

At every turn, monetarism claims the ability to “stimulate” but by count of wages, really what matters most in true economic relation, there is none. Even in the mainstream assessment of simple and raw job counts, the evidence is again presented for easy incorporation; full-time jobs peaked in the very month the dot-com bubble did and it has been downhill ever since. Because of orthodoxist ideology, some other answer must be claimed as an explanation for that but the “best” that economists can come up with is demographics – as if recessions are taken to be by Baby Boomers on the cusp of retirement the perfect time in which to retire.

The fact of wages alongside full-time jobs and their combined relation with recession dispels any idea that Baby Boomers are the problem. The Fed said it could stimulate utopia but the more it tried the farther away we went. They strived for an economy without recession, but it is supposed to be unconnected that the economy is now without recovery, of any kind, instead.

The past year or so has been a near-perfect microcosm of this disconnect between orthodox views on labor and wages and how the real economy actually works. Nominal wages have barely budged during what has been continuously proclaimed the “best jobs market in decades.” Already deviating from expectations, economists have decided that “slack” is the missing factor. But even with “slack” orthodox economics fails to discern what is actual economic progress as opposed to the mere illusion of it.

Oil prices have collapsed since the middle of last year, and with them the official calculations of “inflation.” That has led to what looks like an increase in real wage rates, which is taken as something significant – only a few months ago this idea accompanied every single “unexpected” setback, as oil prices were undoubtedly a massive positive factor. Again, nominal wages have not really budged and in 2015 have clearly decelerated. 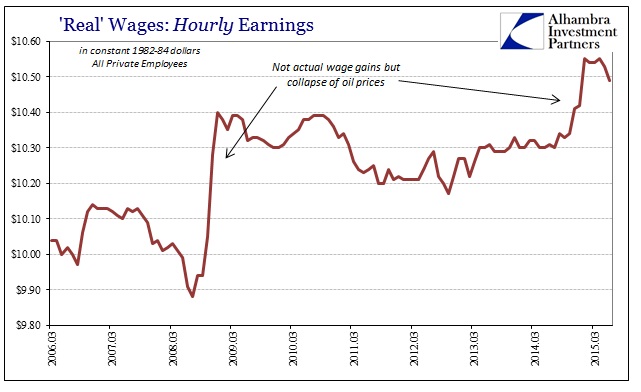 Like September 2008 (the last time oil prices crashed this much), the increase in “real” wages was nothing but a changing number and didn’t reflect actual economic circumstances (which were totally the opposite). In other words, this focus on what is accepted as “real” wages is unimportant to the point of splitting hairs – missing the real trends and actual economic reality. 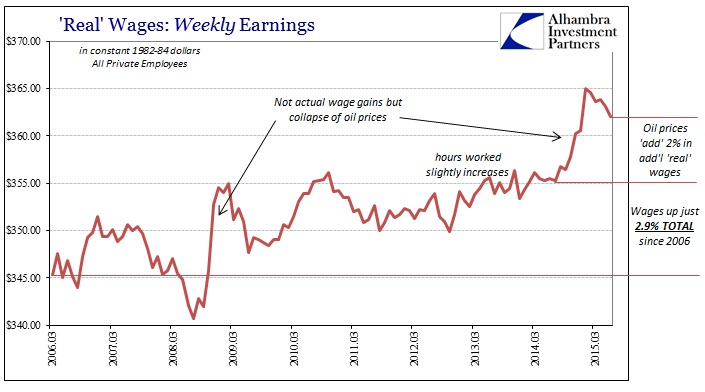 In terms of weekly wages, through July 2014 weekly wages were up just under 3% total (not per year). That dates back to March 2006. In other words, across more than eight years, real wages barely moved, meaning the only improvement, as far as widespread economic progress, was predicated on the raw increase in payrolls which looks more and more suspicious with each monthly decline in spending. At this point, being so far behind for so long, would it really matter that the oil price collapse may have added 2% in weekly earnings? A recovery would mean not an additional 2% of lower prices, but rather nominal gains of 4-6% month after month after month. It has been so long that economists are able to use unfamiliarity with true recovery as cover for this deficiency.

Again, we see that the hole left behind by monetarism’s continuous injection of instability is the decisive factor and not the miniscule, by raw count of time and compounding, positive numbers that show up. When the economy is beaten down quite consistently for fifteen or sixteen years, with only asset bubbles to create “momentum”, what good at that point is the crush of the artificial energy sector? 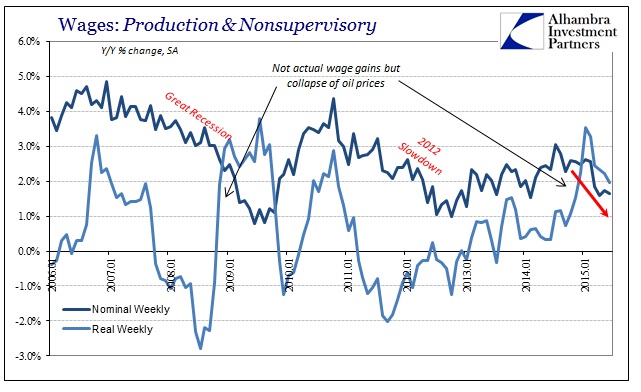 There has been no recovery, at all, and hasn’t been one since monetarism took the marginal economic lead. Redistribution through asset price channels is a poor substitute, and in the current cycle is fully unmasked as such. The accumulation of that impoverishment is what we see of 2015 so far, what looks more and more like a re-recession without any real recovery from the last, very deep one. Mainstream thought, politics and media, still clings to the idea that monetarism will work this out, holding the power of correction when it is increasingly obvious (and was contemporarily) that monetary policy holds only the power of depression and decay. We know the degree of monetarism directly by the size of the hole it leaves in the economy, and the current hole measures almost two decades.

This is a thoroughly bipartisan mess and will not end until someone finally challenges orthodox assumptions, easily accomplished on observation and empiricism backed up with a very restless voter base. That is the populism waiting to be unleashed, as economists are but the court mystics, modern Rasputins to control, badly, only the increasingly untenable status quo. 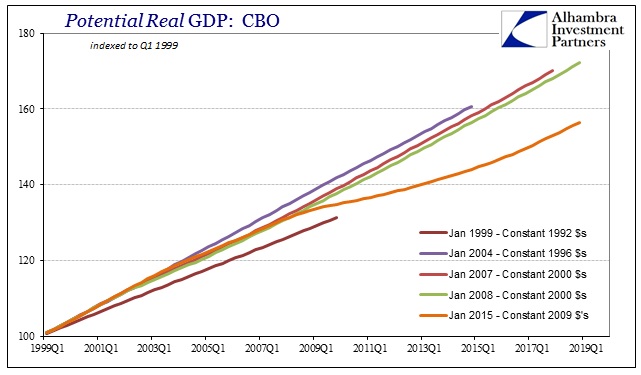