The entire suite of global asset bubbles is predicated on nothing more than promises. It is widely acknowledged, even among those doing the most promising, that so far this “cycle” has been substandard in every way imaginable and at every turn. Yet, for all that continued disappointment, the fact that there was marginal positive numbers remains as the basis for what is supposedly going to appear. Economists say that the recovery is closer now than ever, and it will show up just in time if everyone believes the fairy tale.

Time is already a problem, as this is not supposed to be a debatable subject already five years after the end of the Great Recession. Faith is difficult under these circumstances, but more recently it is being challenged, and rightly, by an increasing recognition that the deficient recovery that we already experienced was far worse than thought. There have been serious downward revisions already to retail sales and related durable goods, both stricken by the 2012 Economic Census that revealed too much upward bias in the trend-cycle components.

Yesterday, that disappearing “recovery” struck now industrial production. As with the other data points, the benchmark revisions were severe and, as if it needed to be confirmed, downward. From the Federal Reserve:

For the most recent recession, total IP still shows a peak-to-trough decline of about 17 percent, and the dates for the peak and trough are unaltered. However, the lower rates of change for recent years indicate that the recovery in the industrial sector since the trough has been slower than reported earlier. Total IP is now estimated to have returned to its pre-recession peak in May 2014, seven months later than previously estimated.

That last sentence about sums up the state of the economy now owned by the federal government and its various subsidiary agencies; if it weren’t for reduced capex, a slower business environment, capacity utilization approximations would have been much more obvious in showing how badly trend-cycle over-estimated so far. Industrial production which was prior figured to be almost 5% above that prior cycle peak (already an insufficient recovery) is now calculated at not even 2% above – almost seven years and nearly 18 million more people, but production levels have barely budged? 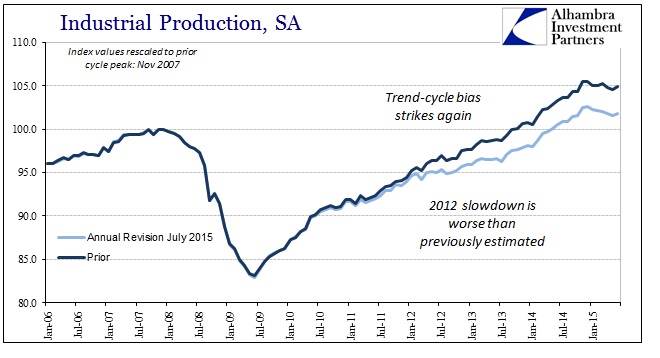 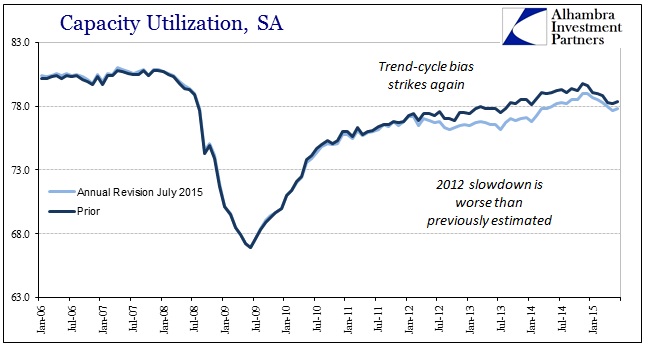 While this downgrade is important in its own right, the greater significance is how it relates to those economic promises upon which all the bubbles rest. In other words, economists already under-delivered so far but the degree to which the recovery deviated from those past promises is far more serious and substantial. They claimed, especially central bankers, that 2012 and forward would be if not terrific at least sufficient. It wasn’t, and now the degree to which it wasn’t is much more. If the 2012 “recovery” has now disappeared, in greater part, in hindsight, by what measure are their future promises for economic delivery now judged?

Already, the revisions to these revisions are being written as if none of this matters – the past is just the past and it is academic debate for historians. Our economy is supposed to be the future and the Establishment Survey, with its clear trend-cycle bias showing, is unquestionable about what that means. The problem with that dismissal is becoming more obvious with each sinking benchmark, however, as if all these other data series are falling away due to trend-cycle then the Establishment Survey is no more reliable, and very likely much less so.

There has already been a steady disconnect between the economy of the numbers, that which is presented by economists and the media, and the economy “felt” and lived in by actual people. As usual, the people are being proven right, time and again, and economists will barely comment and certainly won’t allow it to color their continued recovery fantasies. At some point, investors, though, might begin to break out of these rationalizations and join the gaining disassociation. 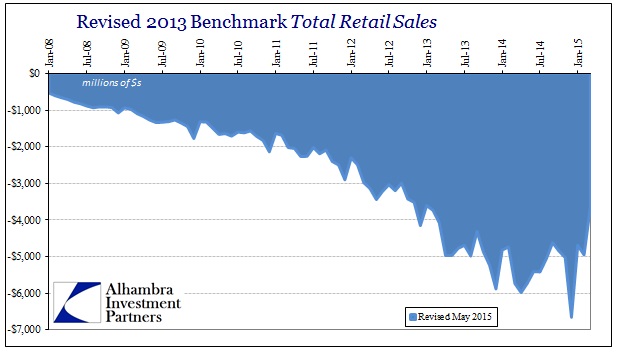 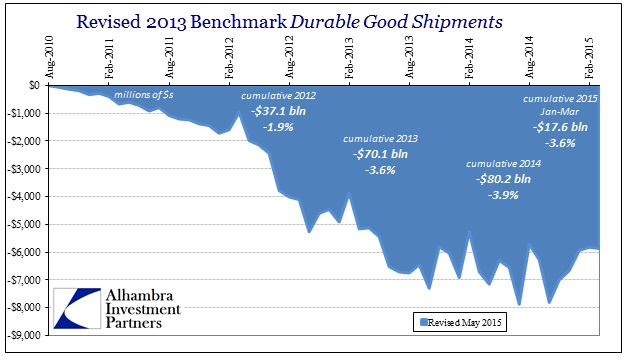