TIC For May Is Really What Is Missing About China

TIC For May Is Really What Is Missing About China

The latest update for TIC “flow”, for the month of May, was mostly what was expected given the “dollar pause” at that time. Central banks were still active but not nearly as engaged as they had been through the worst parts of the “dollar” crisis in late 2014 and early 2015. Official accounts (central banks and foreign governments) had turned positive in May for the first time since November, and even treasury mobilizations had dropped considerably.

This is not to say that all was decent and good about the “dollar” in May, only that it wasn’t nearly so vibrantly depressing. Given the activities in July, we may find out through TIC a few months down the road that this was the proverbial eye of the hurricane. 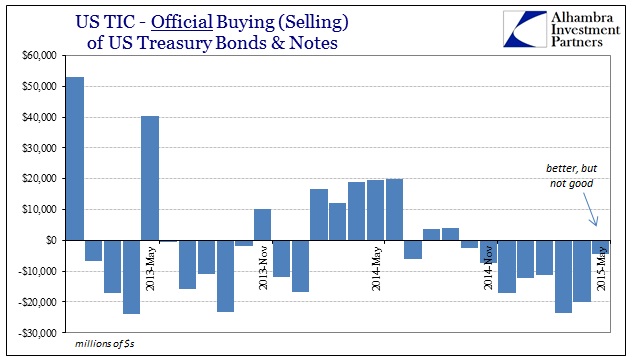 Again, for the most part, the rest of the TIC series was rather uninteresting. Private flows have been more placid and, more importantly, bank balance sheet liabilities (what is reported) continue to retreat and do so significantly; just not with any appreciable acceleration in May. 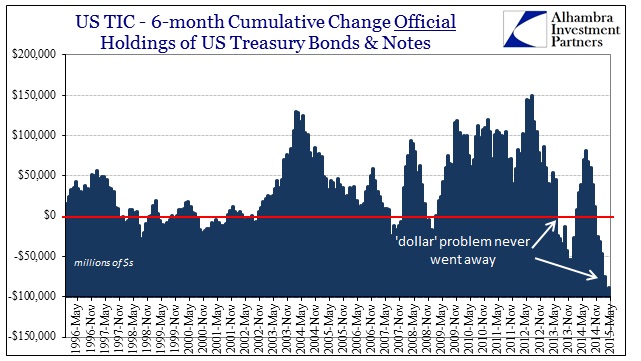 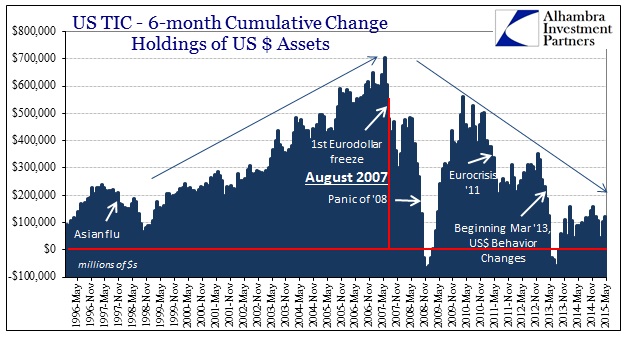 Bank balance sheet “flows” have fallen into a quarterly pattern in the past two years, which makes direct comparisons somewhat difficult. As you can see immediately below, the monthly declines at quarter end surged to a record in December (for any single month in history), almost one quarter of a trillion “dollars”, but was less dramatic at the March quarter end. The offsetting months, however, have continued to be less compensation to those quarter-end downturns. To my view, that suggests banks are still retreating but at a less disastrous pace through May. 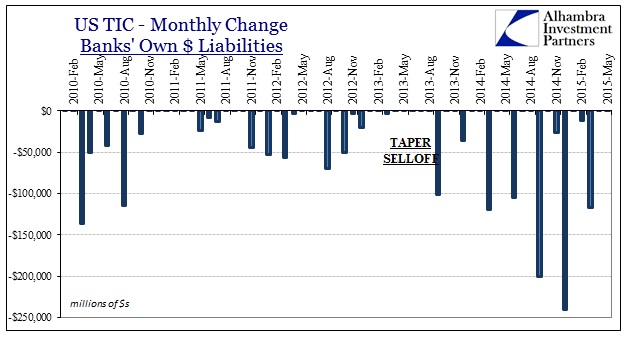 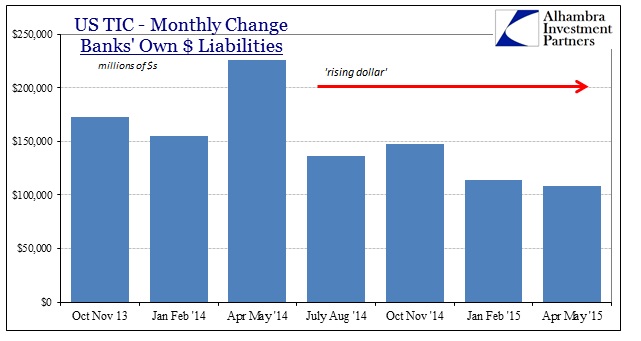 The greatest significance of the May TIC figures may be what is missing here. The most noticeable “flows” were in just a few places (both in terms of categories and geography). Brazil once more, unsurprisingly, declined in its UST holdings suggesting activity related to trying once more to thwart renewed depreciation in the real (the real had retraced after the March FOMC meeting from about 3.29 to the dollar all the way to 2.90 by the end of April; since then, the real has pushed back toward those troublesome lows with it sinking to 3.185 again by the end of May). 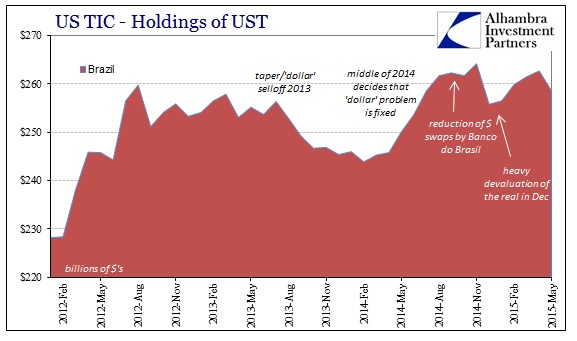 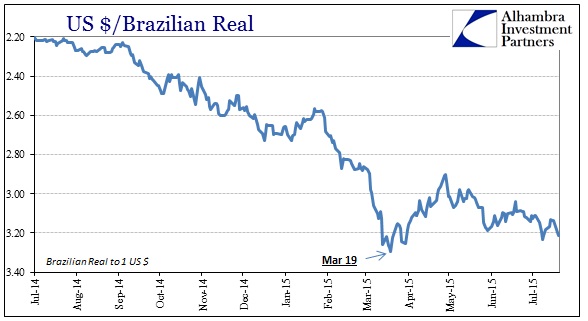 While that shows the limitations of this relative calmness, and only by comparison to the broad-based, global disorder of the months just prior, it is China that confounds. The stock bubble retreat did not start until June, but China had been in a sort of unnatural stasis about its money markets in the months leading up to that. By many measures, China has experienced historic levels of “outflows”, which are really winding down its version of the “dollar short.” I continue to believe that is by design of reform, as the PBOC has alluded several times to dollar “speculators” in its housing and WMP bubbles.

Straight away, you have these contrasting visions of uninteresting and highly stable money markets paired with tremendous “outflows”, all of which precede perhaps the most concerning stock event of recent years. 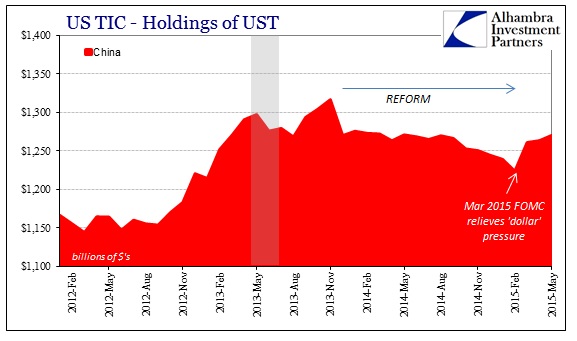 The TIC figures provide little if any answer to any of that, though the good folks at ZeroHedge have theorized that Belgium and collateral posted at Euroclear are Chinese in origin and title (which is more murky if it is collateral). Given the nature of foreign behavior surrounding China financial factors, that is quite plausible. 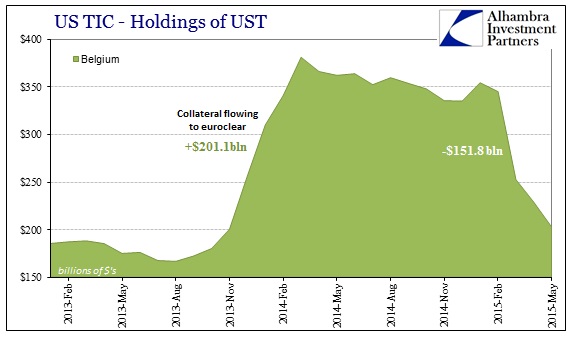 It would go a long way to at least starting to comprehend, if not yet explain, the most important element in all of this: 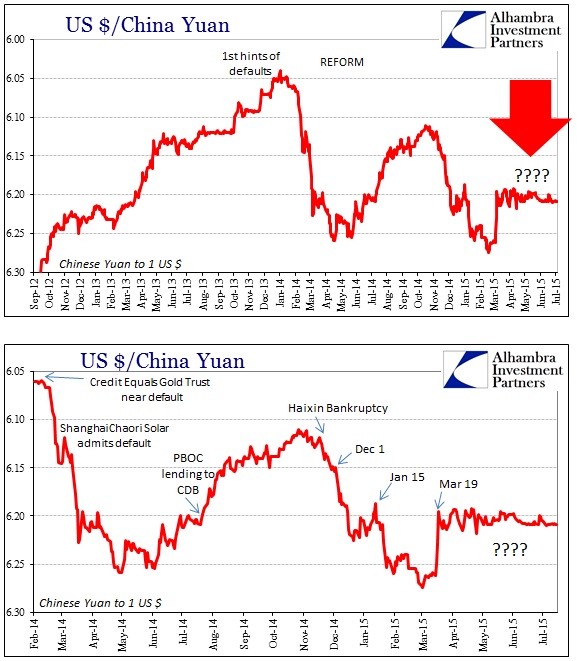 The yuan has suddenly, right at the March FOMC meeting, gone limp. Trading has been confined, except for very brief, intraday outbursts, to an increasingly narrow range. Given its behavior particularly as a full part of the reform agenda to that point, this amounts to what can only be hidden and inorganic factors. Whether that means PBOC intervention is unclear, though suggested by even TIC, but this is the most important and unexplained dynamic in the “dollar” world at present.

Perhaps the June TIC updates will help shed some light on what has been going on with China’s “dollar short”, but I doubt it. The nature and especially the scale of what might be happening in the money markets has global implications, and may (conjecture on my part) start to explain the reversal in the Chinese stock bubble and ultimately even relate to the “dollar’s” renewed disruption in July so far.