It will be a few more days before the major banks release their quarterly balance sheet figures for Q2. We already know from their earnings reports that money dealing is no longer much of a high priority for global banks, as it is, quite simply, no longer profitable. Commentary still dwells on that as a matter of Dodd-Frank, Basel III and whatever regulation can be tangentially assigned, but the timing of the framing all but gives it away as something else.

The five biggest U.S. securities firms saw their combined revenue from bond trading drop 12 percent to $10.9 billion in the second quarter from a year earlier, data compiled by Bloomberg Intelligence show. That puts the global industry on track for a seventh decline in the past eight quarters.

“Bond trading” is and has been a euphemism for these kinds of eurodollar activities. It wasn’t, after all, bond trading in the literal sense that caused each of these “investment banks” to nearly collapse in 2008. The last sentence in the quoted passage above is the relevant portion of timing; namely eight quarters now of deficiency in money dealing, broadly speaking, which aligns with the start of Q3 2013 and the word taper. It seems as if global eurodollar banks cannot make money without the “guaranteed” directional sense provided by the QE regime in the US.

If this was strictly a domestic problem it would be somewhat easier to identify in quantitative terms and in location upon balance sheet peripherals (balance sheets themselves are worthless, mostly, in this endeavor). But the eurodollar “supply” is as much foreign as domestic, so the complications run outside geographic boundaries (intentionally, as that was the reason it starting in the first place in the 1960’s) and therefore regulatory alignment. As their American counterparts, global banks, especially the European hub of the eurodollar system, are finding themselves without their major “revenue” source:

Credit Suisse Group AG, Barclays Plc and Deutsche Bank AG are already overhauling their investment banks to respond to stricter capital rules and a slump in debt trading that eroded some of their most profitable businesses. Now the banks’ new bosses, who took over this month, must decide where and how much more to scale back.

Again, capital rules are somewhat of a misdirection, but there is no mistaking what banks are doing if even the “why” they are doing it can be muddied by misunderstanding and ideology. The response has been almost breathtaking, as banks all over the world depart from what I have called “dark leverage.” There is no pure manner in which to measure this, nor, really, a satisfying definition, but until such a point as both those needs can be met the quantification of notional derivative values will have to suffice as a flawed substitute. I have catalogued individual American banks’ collective withdrawal from “dark leverage” and with the European banks close to reporting we can add a more global reach to the premature eurodollar withdrawal (“premature” in the sense that if central banks wind down their money dealing behavior there is nothing with which to fill the gap).

In this anecdotal update I am going to use two of the Big 3 Swiss banks for all the reasons January 15 stands out; namely that the Swiss system is still a massive hub for the “dollar.” Unfortunately, unlike the more basic balance sheet figures, the Swiss banks don’t break down their derivatives exposures by currency, leaving still more assumptions to govern our analysis. I find the assumptions in the end reasonable, as even in cases where exposure is murky in terms of exact currency denomination it is, in practice, almost irrelevant as indistinct from wholesale operation more broadly.

For example, we know that Swiss banks are about equally weighted to the “dollar”, the euro and the franc in terms of their actual balance sheet, but that in their derivative books it is far more “dollar”, then euros. In terms of global wholesale operation, the withdrawal of “dark leverage” may not matter specifically of “dollar” or euro because we can reasonably infer, from deduction as well as broad proxies, that banks are cutting back everywhere in terms of money dealing (which is one reason why it is a mistake to assume that the euro wholesale system is irrelevant or disconnected from the “dollar” wholesale system; in many respects, they are really different expressions of the same function and purpose). In short, if UBS is reducing its IR swap footprint, and they are, it is very likely a big problem for both the “dollar” and euro.

Unfortunately, derivatives data is significantly more recent as greater disclosures were not made until 2009 and forward. Credit Suisse, like Goldman Sachs, provides only derivatives notionals beginning in Q1 2009 (prior to that the bank only published contract values and netted exposures as to suggest limited risk; which CDS books exposed in 2008 as pre-1990’s thinking). UBS provides a deeper history but only on annual basis (until 2014 when the bank started quarterly). The incomplete nature of derivatives reporting, especially prior to the panic but even to this day, is directly related to the relatively primitive regulatory (and mainstream) thinking and belief about their importance not just in determining bank risk but ultimately more basic economic concepts like money supply and liquidity. At this point, still, derivatives and dark leverage don’t merit much if any discussion at all when framing the most important monetary relationships.

Still, with those flaws in mind, the now-familiar trajectory is obvious. 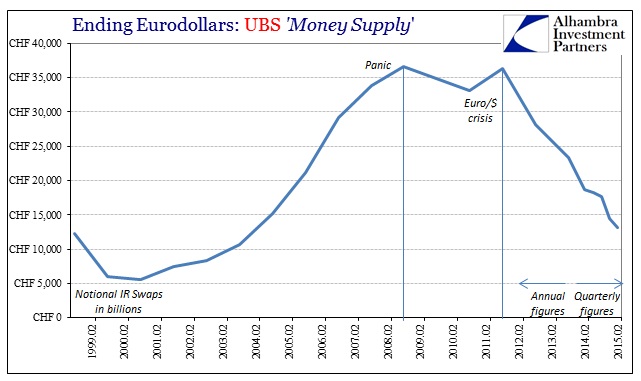 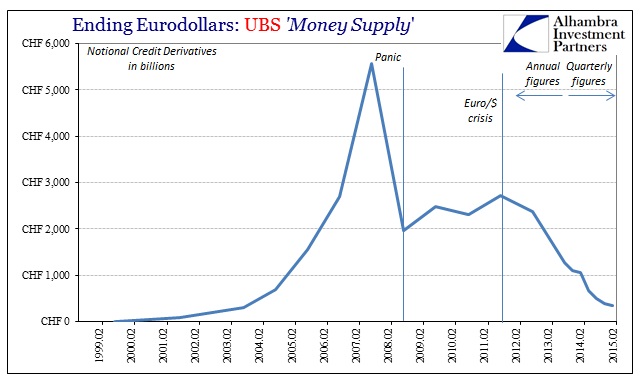 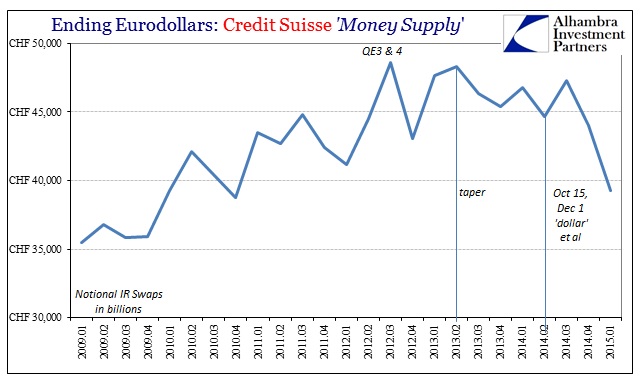 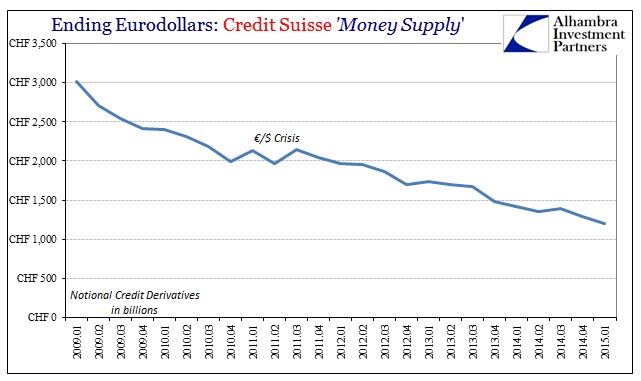 In terms of broad interpretation, CDS and credit derivative books were the primary dark leverage format leading the panic in 2008; the absence of CDS capacity in the face of pricing irregularity (self-referential to this balance sheet deconstruction) was, in my view, the most destructive element of the panic. Thereafter, some balance reconstruction was offered, and in the form of some CDS but mostly IR swap capacity, but only until the 2011 flaring in the euro and re-flaring in the “dollar.”

Taking these Swiss bank results and plotting them alongside the figures from OCC we can see just how much the Swiss banking system was “responsible” for both the panic in 2008 and the “dollar’s” rediscovered illiquidity in 2015. 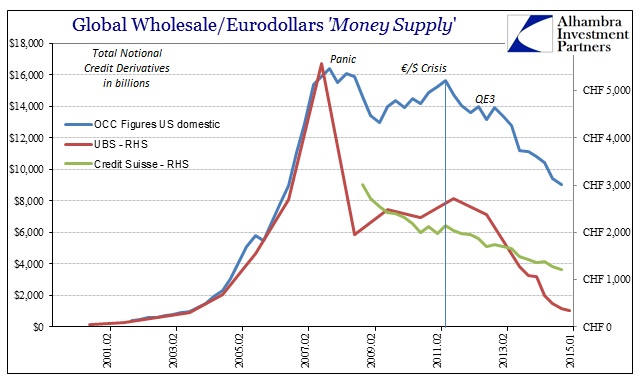 The Swiss banks in 2008 were essentially forced out of the “dollar” market in all facets by the SNB that was acting in paramount national interest (and correctly, in my opinion as banks needed to be drawn down). In terms of CDS capacity, the Swiss left arguably the biggest hole in “dollar” liquidity, very likely making whatever the Fed did traditionally doomed from the start (the Swiss banks merited very little FOMC discussion in 2008, which tells you a lot about these economists who claim to be able to direct the US if not global economy). 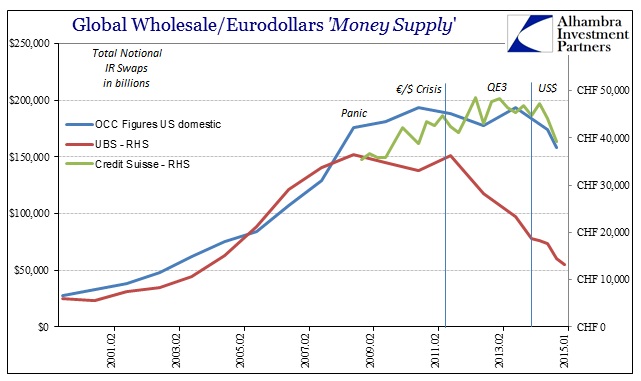 More recently, and in view of IR swaps capacity, there is more than a little divergence between UBS and Credit Suisse but one that seems to be unified especially in Q4 2014 and Q1 2015 (which includes the January 15 SNB action). As mentioned a few weeks ago, Credit Suisse has come to regret not restructuring its eurodollar operations (“bond trading”) where UBS already had. In other words, the past few quarters have further convinced the last remaining holdouts of eurodollar behemoth stature to join the receding tide:

Dougan, who headed Credit Suisse’s investment bank before becoming CEO, resisted calls for a radical downsizing of the securities unit following UBS’s decision to do so. He instead focused on incremental cuts to the business and costs to improve earnings. The strategy hasn’t paid off for shareholders, with Credit Suisse shares currently trading at about 1.1 times the bank’s tangible book value, compared with 1.4 times for UBS.

Downsizing is sweeping global “dollar” banking and it is having tangible effects, though most observation ignores this tight relationship. Dark leverage, for all the inability to define it, is certainly observable, as 2008, in at least its growing absence. Where many banks saw the irreconcilable direction of all this as far back as the middle of 2011, convinced by renewed crisis the entire wholesale edifice was untenable, those that resisted on this side of QE taper are being driven belatedly to the same conclusion (and, again, notice that Dodd-Frank et al appear to have little direct bearing). Money dealing banks, dealing in dark leverage more than money, are no longer keen to do so. That volatility in so many places results from it is the least surprising aspect, even where it takes many assumptions and flawed data to ultimately get at it.

The eurodollar standard, supporting the global “dollar” short, which in turn supports asset prices and even national currencies (and national abilities to connect and conduct according to global trade as it exists now), exists only somewhere between being dismantled and falling apart. What the analysis of individual bank figures show is the evolution of that, namely the uneven nature prior to the middle of 2014 which has since unified; thus explaining, to a great extent, why the “dollar” this past year has been so globally disruptive.