Repo rates absolutely surged at month-end, LIBOR jumped a few more basis points and the eurodollar curve is bid almost everywhere in large chunks. Commodities continue to get smashed, especially crude oil, and currencies are devaluing in almost equally large portions. Even the treasury market is somewhat sporting the tell-tale collateral calls. In short, the “dollar” problems continue into this week with only a notable acceleration in the deterioration. 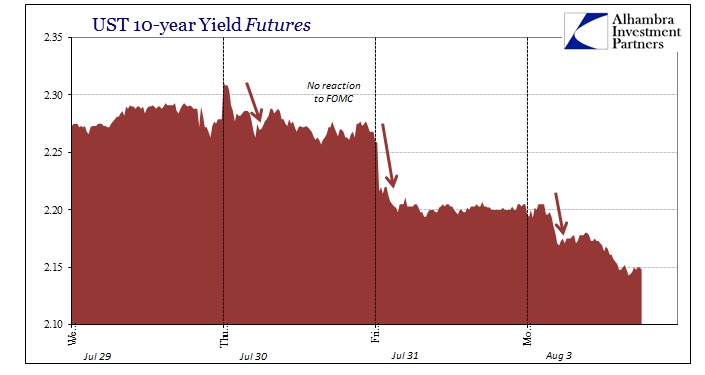 Month-end repo in MBS was a ridiculous 36.9 bps, far above the ends of both April and May. “Escalation” is the only word that really fits, and not unlike the period just prior (and after) QE3. 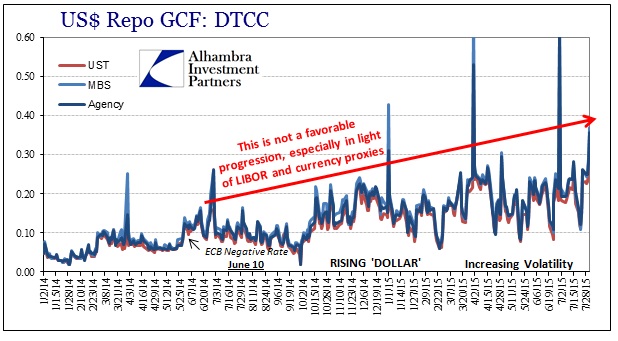 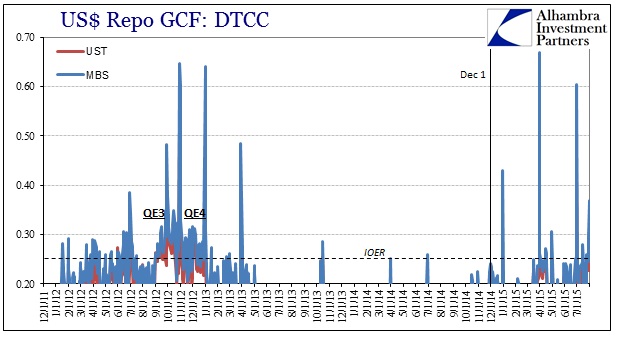 LIBOR, which has been rising steadily since the end of last November, added a few basis points all along the curve. One-month LIBOR was above 19 bps, while 3-month LIBOR reached beyond 30 bps. Twelve-month LIBOR continues to show greater acceleration than either of those. 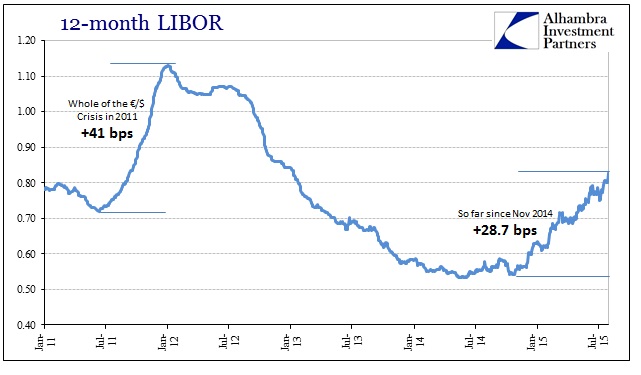 The eurodollar curve continues to be bought this morning, as flattening works all around. 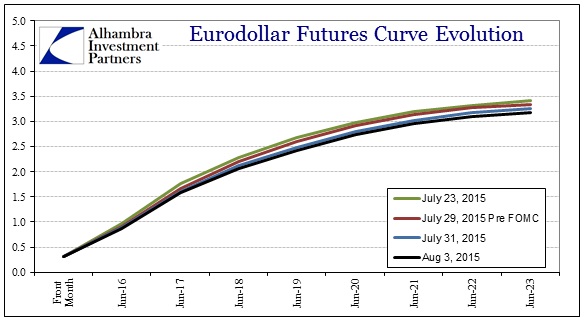 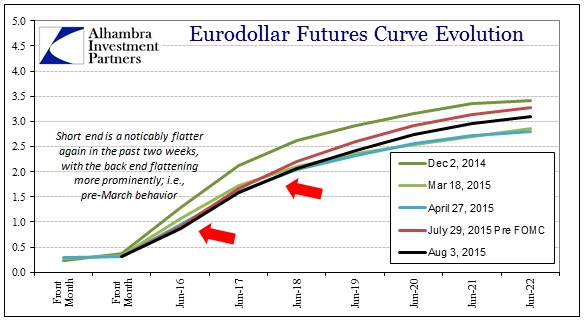 The ruble dumped this morning, as did the real. The franc was only moderately devalued, though the direction remains. 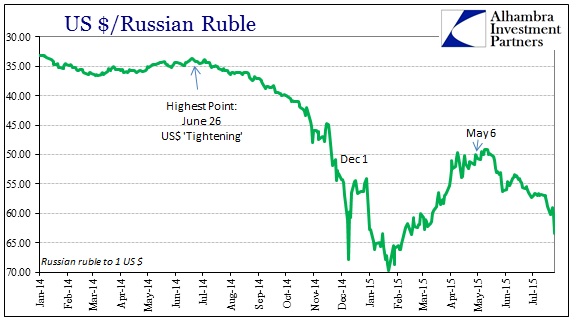 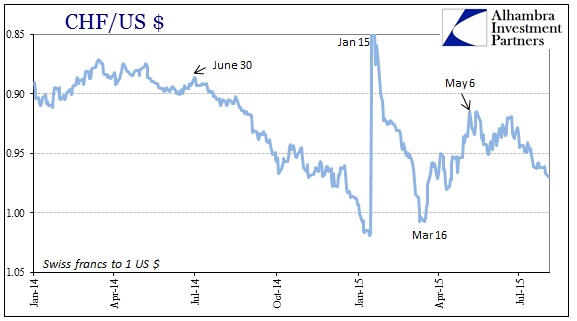 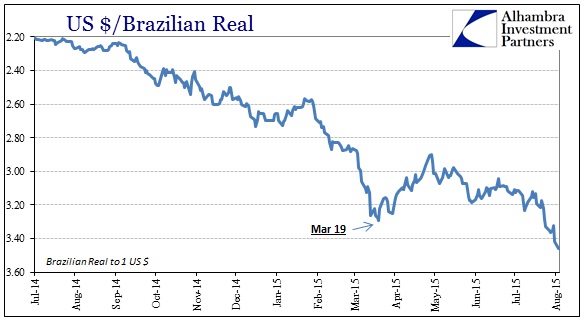 Gold was actually bought at the AM fix, but pressured by the PM fix to unwind all those gains; right back down to $1,080 again. 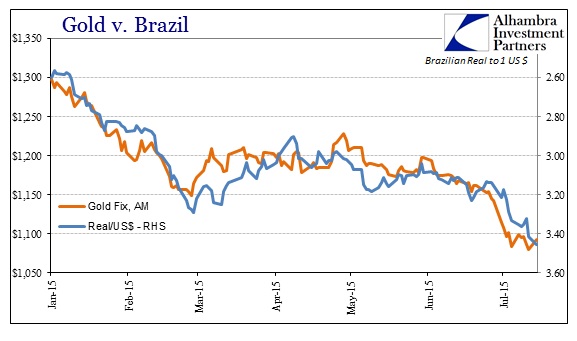 Copper is testing its recent multi-year low, with front month contracts being sold by $0.015 to $0.02 out to March 2016. But it is crude that I think is most significant here, as the entire curve is pounded by the “dollar.” 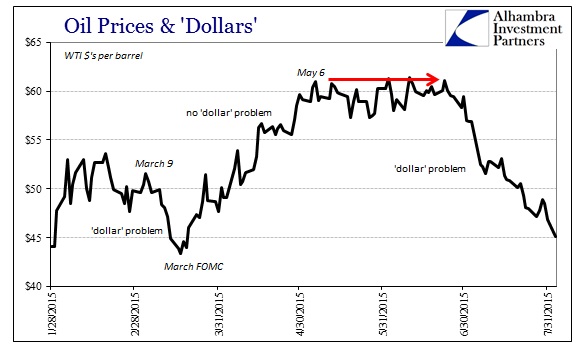 Where the spot price is only testing the March low, and still a few dollars above, the rest of the curve, in particular the outer years, is actually significantly below the worst “dollar” parts of March. The December 2018 contract broke $60 for the first time as the entire curve is taking both the bad “dollar” environment and the related growth expectations quickly to the negative. Again, these moves are not small – compare the current curve below (black line) to just a week or week and a half ago. 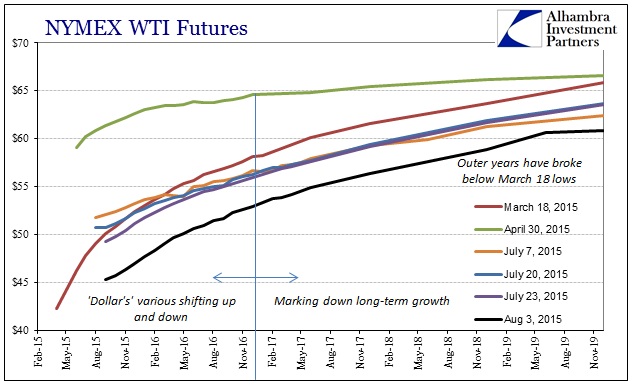 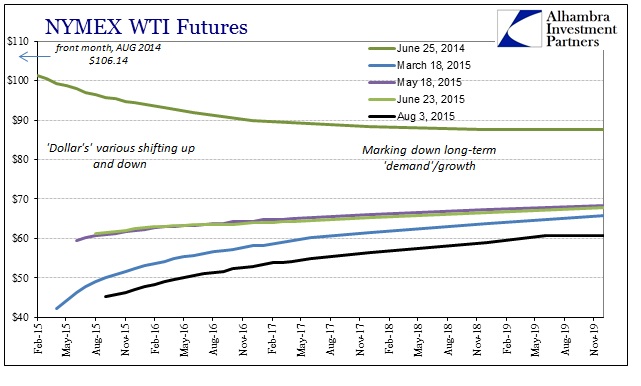 There is very little optimism in this curve, as the “dollar” storm grows worse. As if to emphasize that interpretation, only the Chinese yuan appears oblivious. Rather than being a reassuringly placid node to the eurodollar network, its obvious artificiality actually adds greater apprehension as the flatness of the yuan surely belies what is really taking place there (and what the PBOC must be doing to generate such counterproductive and continued nothingness). 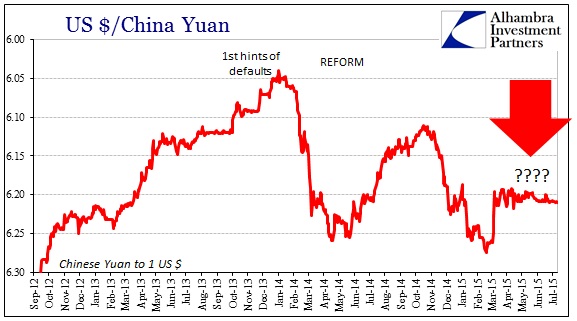 This has all been coming for some time, and it will be interesting to see how far it decays in this renewed trend in reference to the March 18 inflection. The real worrisome interpretation is if the “dollar” is and has been forward looking, unlike other assets, then we might assign current economic weakness to the prior “dollar” episode; the December-March “dollar.” If this updated version surpasses that one, and it has already in many ways, what does that suggest about the economy and growth still to come?