When looking at cyclical inflections, GDP is the last to know about it. That has been the case at cyclical turns in each of the last three peaks, most especially how GDP treated the first half of the Great Recession. More recently, given the abomination of cyclical behavior, GDP finally after three years caught up with the 2012 slowdown. As noted last week in examining the drastic benchmark revision, what was previously believed to be a one-quarter interruption is now estimated at five. That is a serious enough alteration to the past recovery, but it really doesn’t go nearly far enough.

Admitting that it existed was a step in the right direction, but by all accounts the 2012 slowdown remains (with a second inflection in 2015, also in the “wrong” direction). In data series after data series, starting around March 2012, the US economy downshifted to something resembling recession but not quite fully registering as such. That could be attributed to a number of factors, but most likely monetary interjections which had the effect of producing a bifurcation – some of the economy moved under artificial redistributive influence while the rest underwent very harmful and sustained attrition. The economy was growing but not growing; it was in recession but not recession.

That zombie-like state seems to have finally relented in 2015 to a more broad-based, traditional slowdown or even recession. So the fact that even GDP finally conceded on 2012 shows that that first inflection can no longer be classified as anything else. The problem now is that GDP still represents a fantasy, undoubtedly still related to trend-cycle over-optimism that doesn’t appear anywhere else (except, of course, the Establishment Survey which is under the same kinds of heavy influence of adjustments).

Since factory orders are a topic today, we can start there. Factory orders very clearly show that 2012 inflection, dated directly to March 2012. 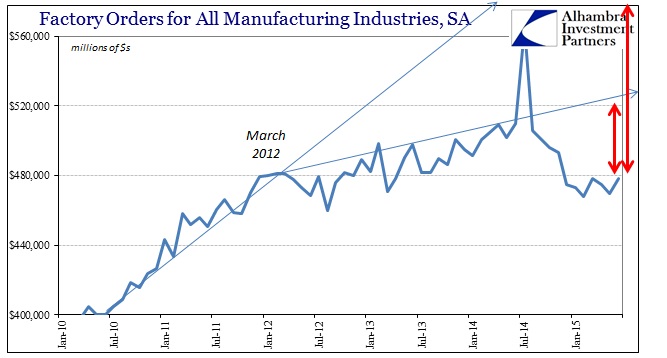 The second inflection, or whatever term might better fit this bastardized “cycle”, is also clearly visible starting in late 2014. What is notable is that the slowdown was not limited to a couple quarters in 2012 or even five quarters across 2012 and into 2013; it never abated until it took its inevitable (in my view) downward turn (attrition overcomes the bifurcation).

If it were just factory orders then it could easily be dismissed as an aberration in the data or that part of the economy, or even a statistical relic of some past projections unfit for the QE world. But it is everywhere. 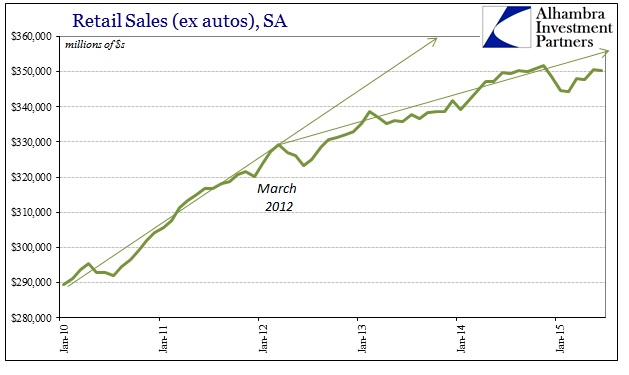 Retail sales may not be as dramatic, but there is a clear divergence right at, again, March 2012. And, as noted previously, retail sales have themselves undergone a significant benchmark re-adjustment that, like GDP, made this first inflection, in full, even more pronounced. 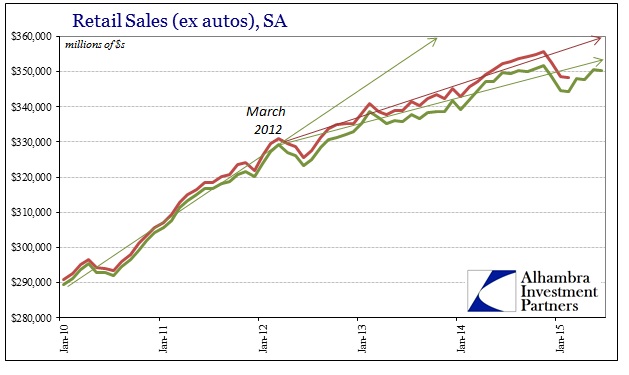 This change in economic direction is not limited to the consumer portion of the economy, as capital goods, for example, are an almost carbon copy of factory orders. That would suggest a broad-based change starting in, once more, March 2012 that encompasses at least a good proportion of both consumers and businesses. 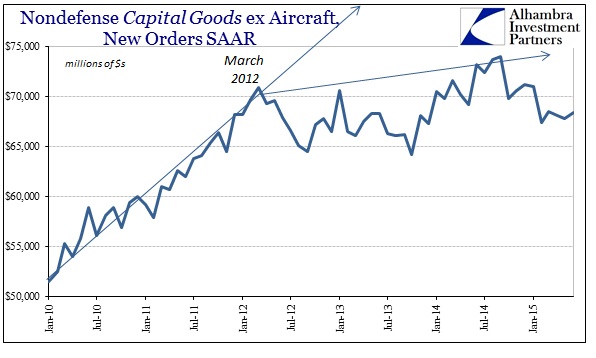 Further, as improbable as it probably should be, the same March 2012 variation appears in both imports and exports. The former might be as expected given that imports are just another expression of consumer demand inside the US, but exports by orthodox thinking should be a separate affair. Yet, here they are both exhibiting the same exact behavior as US factory orders, capital goods and retail sales. 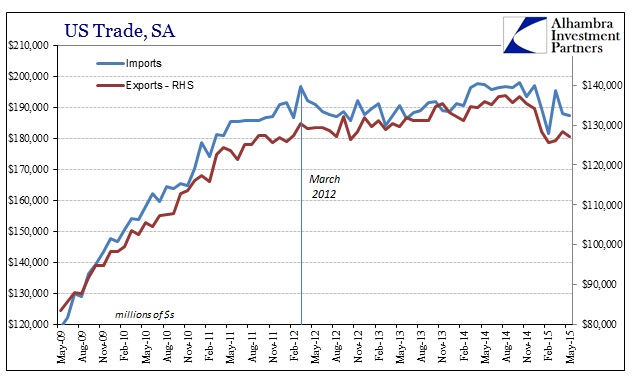 I could continue but you get the picture; “the economy” that slowed in 2012 was not just the US economy but the related and connected global economy. The problem as far as GDP as a measure of the US end of the global economy is that it still treats that 2012 inflection as just a temporary pause that isn’t consistent with a very broad assessment of other factors and accounts. In other words, GDP nearly flatlines in 2012 like everything else but then goes on in late 2013 as if that all had worked itself out (as QE3 and QE4 intended).

The circular logic of monetarism is captured by statistics that rely on those same assumptions. Trend-cycle is an estimate that would be influenced by only the conjecture that QE works, meaning that over-optimism in those assumptions would be carried out in the figures themselves. In short, the fact that QE was restarted in September 2012 likely affected GDP estimates for the remaining years, and because it was assumed to work and thus translated via trend-cycle “seasonal adjustments” GDP then “confirmed” those same assumptions.

That means the “admission” of the most recent benchmark revisions begins to undo, only somewhat, that assumed efficacy. 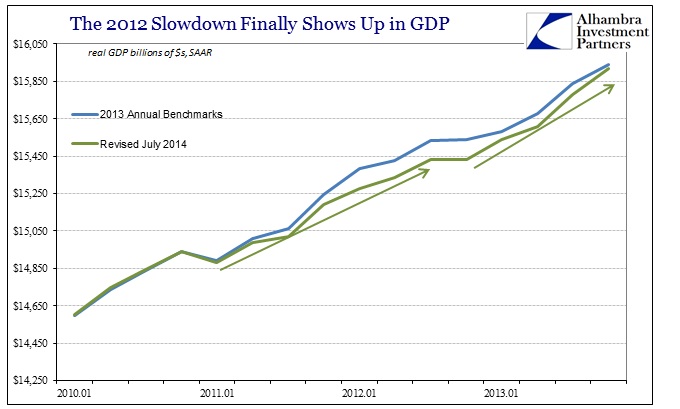 As of last year’s benchmark, the 2012 slowdown was limited to only Q4 2012 and was quickly surpassed as GDP simply and easily returned to the prior trend despite the mountain of evidence that the economy itself, globally, did not. Thus, the most recent benchmark corrects only the first part of that inflection in that it both shows up as something more meaningful and greater, as well as the timing – now Q2 2012 which tardily agrees with the March 2012 recurrence in everything else. 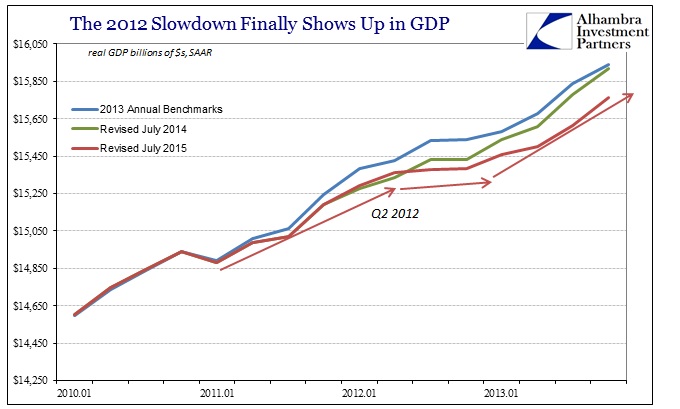 So we still have a problem as GDP again does not fit with the rest of the data, which is quite curious since that 2012 Economic Survey was as much a rejection of ability assumptions about QE2. The 2012 slowdown itself is really that in monetarism terms, so it is odd that now GDP agrees on at least the first part of the 2012 slowdown but then goes on in later 2013 to rejoin the “QE works” assumptions where it so clearly does not anywhere else. 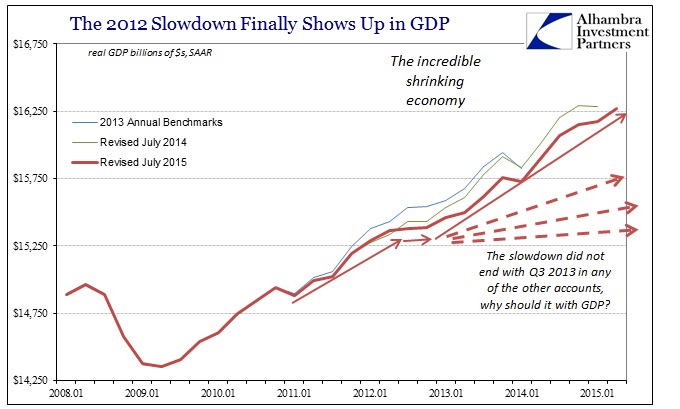 That leaves GDP, I believe, highly misleading about the economic circumstances in the years since. I think we already know that given by the tendency toward instability in the figure anyway despite all assurances that good growth is the new order (or QE works). It was, after all, these other accounts that showed the March 2012 inflection that have been “proven” correct, at least in comparison to GDP that at first stubbornly refused to yield its trend-cycle assumptions. The inference there, again as these other data points remain in unison, is that GDP will likely find itself conforming once more to those other accounts of the economy rather than finding GDP was correct all along.

The larger point about monetary effects, QE’s in particular, will also likely be confirmed. None of retail sales, factory orders, global trade, etc., find any trace of QE3 and QE4 within their trajectories, which would suggest very little if any positive effect (the accumulation of attrition and bifurcation is another story about potential negative effects). If GDP is “forced” to revisions along those lines (and I have little doubt that it will be, the only question is when), as it already has for the first part of the 2012 slowdown, then there isn’t much left of QE or the recovery it was supposed to invent.

That would mean GDP, as the Establishment Survey, does not measure actually the economy as it exists but rather the economy as economists wish it existed. That part has been proven as far as the middle of 2013, and it stands to reason that the rest of the post-2012 slowdown will follow eventually. That would further suggest, given the also uniform nature of 2015, GDP will yet again be the last to figure out the “cycle” in 2015 especially if it is distinct, troublingly, from even the 2012 slowdown it just now, three years on, accepted.