When Even The Est. Survey Slows…

When Even The Est. Survey Slows…

The monthly payroll report needs to be rebranded the monthly labor force report. By far, the most accurate measure of the series continues to be the apathy of Americans not currently working or looking toward purportedly massive employment expansion. Those two positions are not only inconsistent, they are by all intuitive sense mutually exclusive. No less orthodoxy than Janet Yellen concedes as much, which is why “some” labor improvement has been recognized as a serious downgrade on what was universally lauded as the end game only a few months ago.

All the actual numbers were about as expected, without anything surprising in any of the various pieces. Perhaps the only real change of late has been the renewed divergence between the Establishment Survey and the Household Survey. The latter has been much, much weaker of late; showing only +639k total jobs since January, or, coincidentally, exactly half the Establishment Survey’s decelerating gain. Since the labor force is 74k smaller during those same 6 months, it might suggest both are actually overstating but at least the Household version perhaps closer to the economic “slump” that is universal everywhere else.

That would seem to once more confirm Yellen’s very belated admission, where if 74k people fall out of the labor force despite a population gain of almost 1.2 million in the same timeframe the economy would not be classified anywhere near “stronger.” The implications are, more comprehensively, to the opposite qualification. 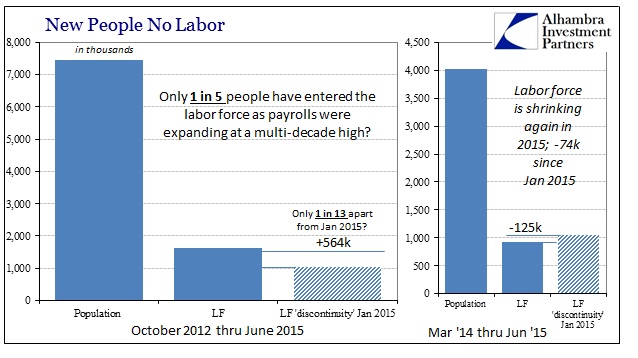 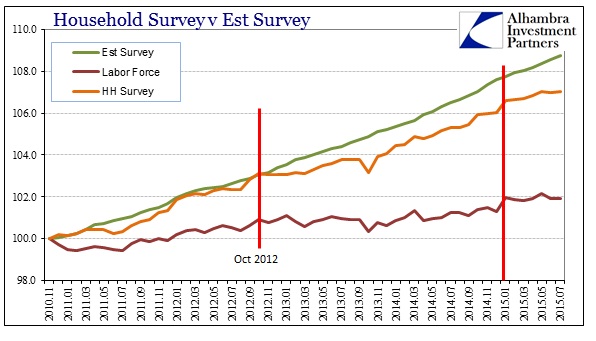 Going back to October 2012, the “shortage” in the Household Survey is now just under 2 million jobs. The labor force has grown only 1.6 million, of which 1.05 million came in January 2015 alone. Those not in the labor force have surged 5.3 million in those nearly three years – more evidence of the elongated cycle.

Even recognizing the potential trend-cycle upward bias, linked, I believe, to unemployment claims, the Establishment Survey has clearly picked up this year’s weakness even if it cannot accurately place it in the proper context (or maybe even with the correct sign). When even the Establishment Survey slows so precipitously you know something isn’t right. 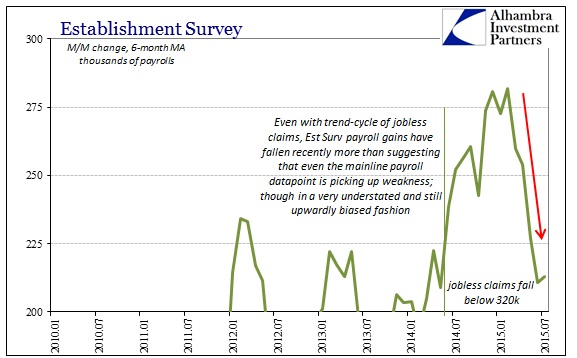 If there is any significance to July’s payroll report it is that the same deficiencies continue but with the added notation of the mainline indicator demonstrating at least the same direction now as everything else. The economy is smaller than when this “cycle” began, and may yet be getting smaller still. There is still no great upturn in labor utilization which is, by basic definition, the economy. 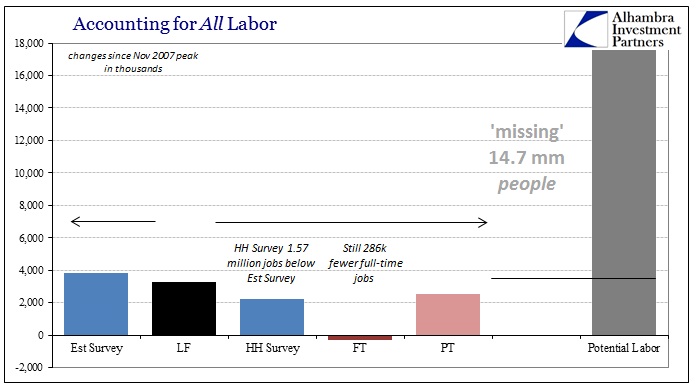 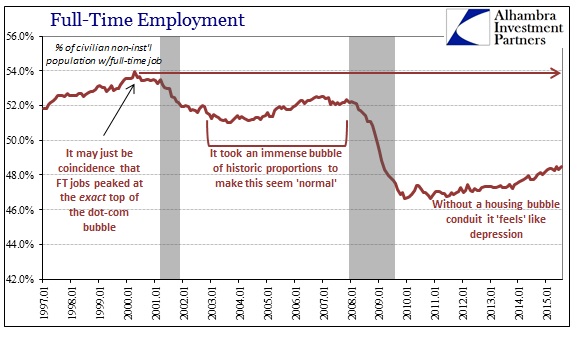 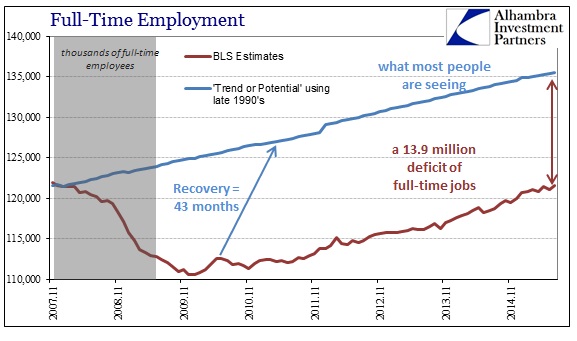