Productivity And The Dueling Economies

Productivity And The Dueling Economies

Productivity estimates were better in Q2 than certainly Q1, even revised, but that still doesn’t change the clear disassociation between the BLS’s version of the economy and the BEA’s. That disparity becomes even messier as the BEA’s last benchmark revision sawed off significant “output” dating back to the now-recognized 2012 slowdown. In tandem, the BLS only revised hours worked (back to 2010) down by the slightest, almost insignificant amount. They just do not want to show anything less than the Establishment Survey’s unconfirmed recovery.

Since productivity is, in the numbers anyway, a statistical bridge or fudge factor between output and labor activity the hardline approach by the BLS has led to, especially recently, some productivity numbers that just make no sense. Even with Q1 “output” revised up from -1.5% to +0.5% productivity is still negative and not really that much different than the advance or first estimate for Q1. 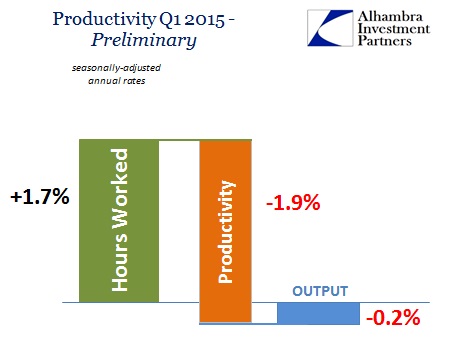 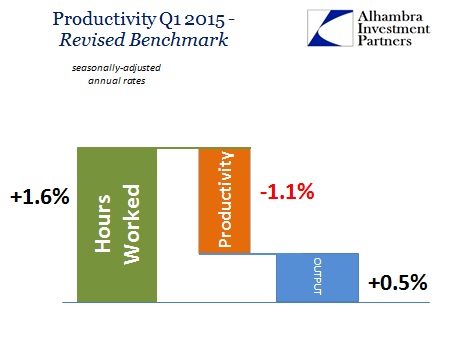 Q2’s estimates work out to a positive productivity figure, but only +1.3% (output +2.8% minus hours worked +1.5%). What stands out, besides that below-average increase in what is generally thought to be a good quarter, is that productivity year-over-year was only +0.3%; essentially zero. The past six quarters, including Q2 2015, have averaged just about zero productivity gains, which simply means that the BLS’s measure of hours worked “absorbs” all the output. That shouldn’t be the case during the “best payroll expansion in decades” as businesses typically, apart from fudge factor statistics, generally don’t hire robustly when there is little to gain from it. 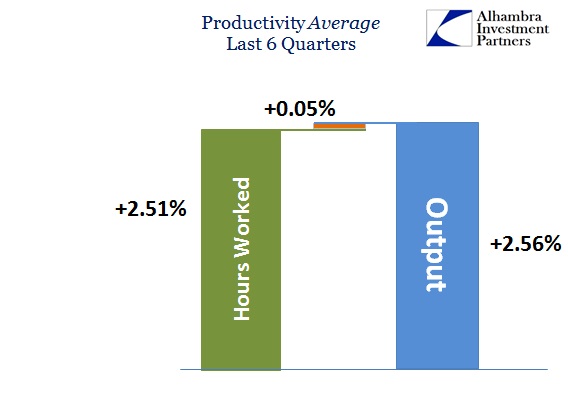 It may be that businesses are acting differently now than they have historically, but the simplest explanation is that, given the productivity setup here, either the BEA is understating output or the BLS is overstating labor. With a broad survey of economic accounts almost certainly against the former, it is far too consistent to believe anything apart from the latter. And the fact that this productivity “mystery” is far more than one or two quarters, the “answer” is likely subjectivity in the employment figures (trend-cycle). Again, unlike so many other accounts of the economy, revisions to the labor estimates have not been altered significantly where numbers for the rest of the economy, especially around 2012, have been.

With a more historically-aligned productivity figure, the net result is labor activity which would be more consistent with what we see of the economy the past three years. 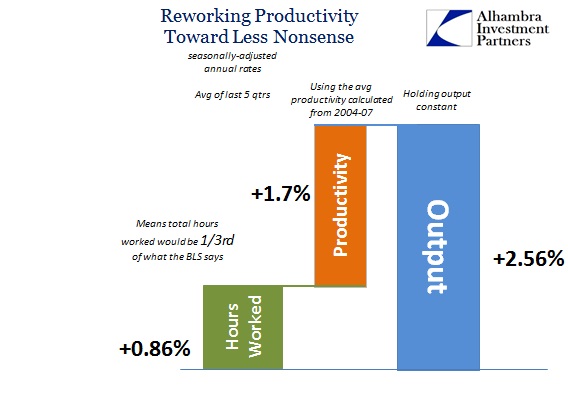 While I have limited this alternate calculation to the past year and a half simply to align and highlight this huge discrepancy with the “best jobs market in decades”, the fact of the figures is that this has been a problem for some time – again, going back to 2012 in this “cycle” and to 1997 overall with the introduction of the serial asset bubbles.

Productivity seemed to have accelerated greatly between 1997 and 2005 but only as a matter of that bridging calculation. In other words, labor activity clearly shifted trajectory lower while GDP (as output) did not (or even close to as much). The missing factor that subtracts before “output” in this productivity fashioning is “inflation.” In other words, that assumed productivity gain could have been just as much an increase in “inflation” (or true inflation) which would have had the effect of reducing “output” in real terms, and thus better arranging output with labor more consistently. 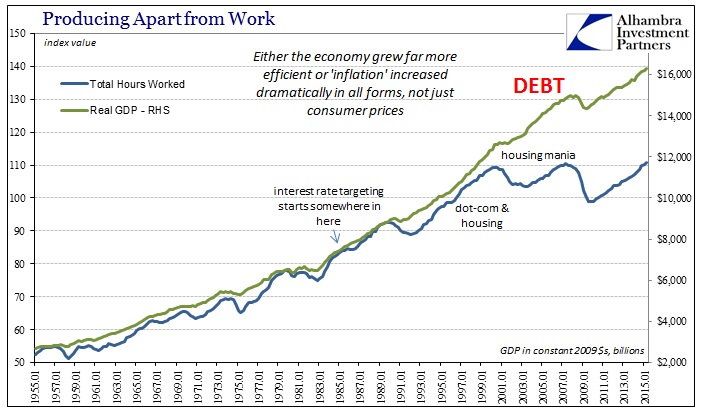 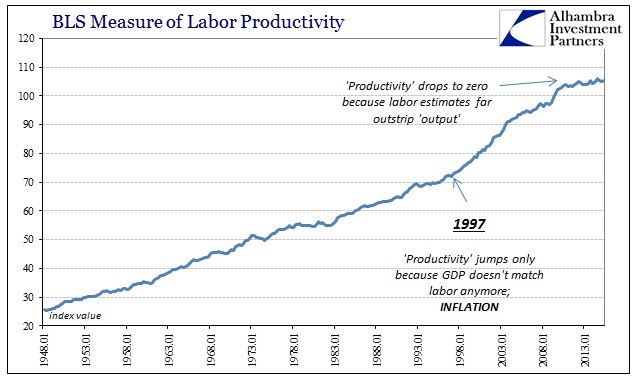 That would suggest that GDP overstated economic gains during the dot-com and housing bubbles relative to lackluster labor. The problem 2012 forward is the opposite – GDP, for all its remaining over-optimism, is nowhere near as robust as the BLS’s version of the labor market would have it. So where productivity must expand in the late 1990’s and 2000’s to equalize the data points, it must shrink to zero post-2012. 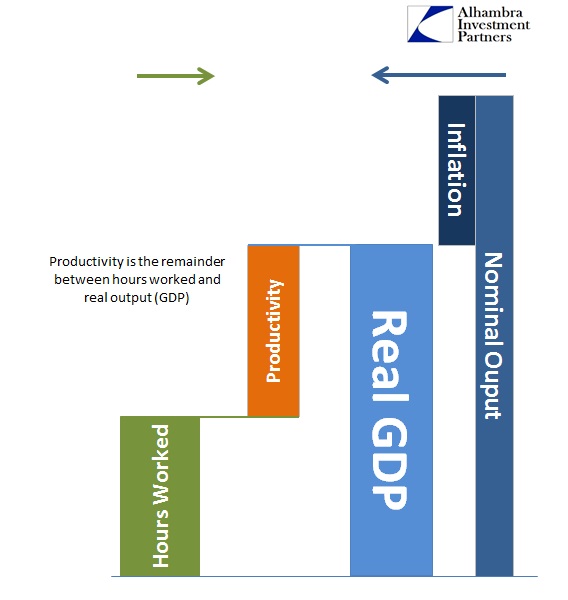 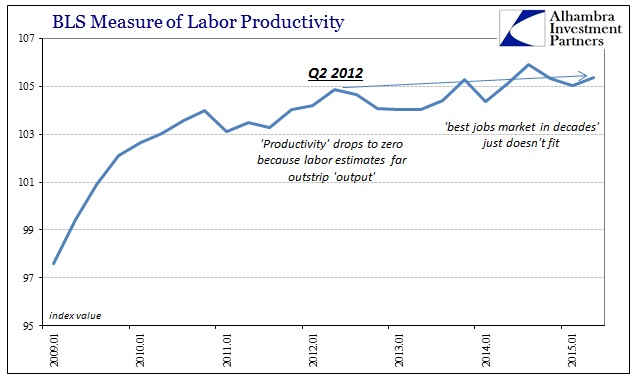 The disparity of the last six quarters is therefore really just a continuation of a calculation problem dating back far longer – really the entire “recovery” period especially as that recovery from the output side gets smaller and smaller with each benchmark revision.

To the view of wages, spending, and especially the labor force itself, it simply makes the most sense that the approximations for labor gains have been so far over-estimated as to create such statistical difficulties lasting more than three years now. This problem and disparity only grows worse if, in my view, GDP itself has also been over-optimistic as is usually the revealed upon further revision. How much of those assumed job gains the past year and a half are just phantoms? That proportion seems only to grow over time, chipping away steadily at the idea of any acceleration anywhere; to the point that in 2015 it may be possible that the deceleration that showed up even in the Establishment Survey is something far worse, maybe even contraction already. 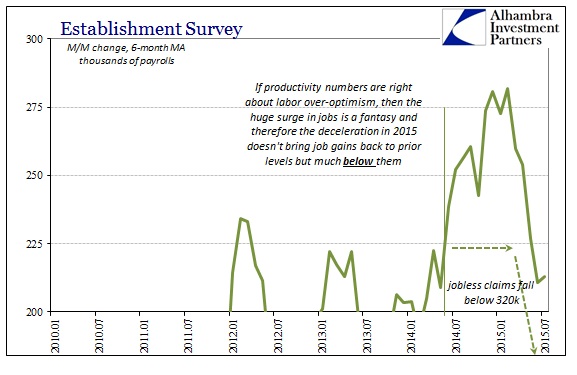