How We Got Here, Part II

How We Got Here, Part II

Going all the way back to before last year’s Jackson Hole conclave, it was clear that there was inordinate trouble in the economy and global markets even though the central focus then was on how quickly to “normalize” everything and anything. The economy was assumed unassailably terrific and markets only reinforced that idea. The problem then, as now, was that argument was bolstered in circular fashion by select “markets” that almost totally depended on the narrative in the first place – markets are up because the economy and the economy is up via the markets.

Beyond that narrow view, there was an enormous gap between susceptible perception and the various structures that actually do support positive function and even momentum. Appearing on CNBC at the outset of the central banker fiesta, Rick Santelli asked me what I thought was missing:

SANTELLI Today is the prelude to Jackson Hole where all of the economists and central bankers are having a pow wow. If you were head and you had the chance to make the itinerary for the topics what would you make the main topic.

SNIDER I would take a look at financial vulnerabilities as they exist in the repo market because again we are going through another surge of repo failures that is quite concerning actually . And I would also take a look at the reason in the economy why if jobs are growing why aren’t wages. I think there is a disconnect there that demands more discussion.

Given the state of the world today, those are probably the only two issues that truly matter – still. For the economy, there never was any of the expected wage robustness that would both mark the final ascension to long-sought recovery and confirm that orthodox views (wealth effect through asset bubbles; monetary neutrality; “inflation” and “pump priming”) actually held some validity. As the FOMC’s inability to act upon those expectations show without fail, wages have never responded despite four QE’s and almost seven years of ZIRP. Transactions for the sake of transactions were just that, and nothing more (and possibly less and abortive).

The flipside of that was financial markets, most especially the “dollar.” Repo has been ground zero a few times for serious illiquidity and very open warnings about general finance. In terms of recent turmoil, it all traces back to last June when repo fails suddenly departed good function – and order has never been restored, a fact that was just set aside or ignored all this time. The repo spike predated even the “dollar’s” more open rise, meaning squarely that interbank illiquidity was likely the proximate spark.

With almost everything going wrong now, including the US economy which was supposed to be the bedrock “dirty shirt” (revealed now just the same tawdry laundry as everyone else’s), it makes sense to continue the conversation that should have been the dominating topic last August, if not for the whole of this “recovery.” At Jackson Hole, those central bankers might have been far better served asking themselves why 5% GDP (or 4% as it was then, small difference) was the anomaly rather than the fitting trend. 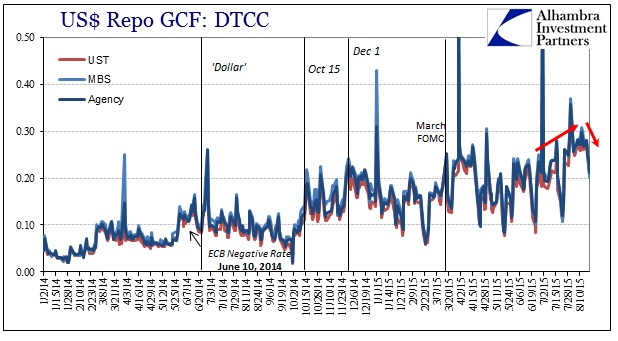 Rarely is the weakness of such intellectual commitment and theory exposed in one condensed space, but Paul Krugman provided just such an exposition perfectly timed last Friday. Sensing the growing discord over economic activity (or the “unexpected” lack of it), Dr. Krugman laments yet once more that governments are not more committed to “free money” spending. His is the ancient Keynes of “automatic stabilizers” and the deficits that finance them. If there is an update to it, he only provides that maybe governments might spend more toward something of “value” rather than useless pyramids in the desert (as once fully sufficed).

One answer is that issuing debt is a way to pay for useful things, and we should do more of that when the price is right. The United States suffers from obvious deficiencies in roads, rails, water systems and more; meanwhile, the federal government can borrow at historically low interest rates. So this is a very good time to be borrowing and investing in the future, and a very bad time for what has actually happened: an unprecedented decline in public construction spending adjusted for population growth and inflation.

It is, however, the next paragraph that gives away the whole thing – economy to finance:

Beyond that, those very low interest rates are telling us something about what markets want. I’ve already mentioned that having at least some government debt outstanding helps the economy function better. How so? The answer, according to M.I.T.’s Ricardo Caballero and others, is that the debt of stable, reliable governments provides “safe assets” that help investors manage risks, make transactions easier and avoid a destructive scramble for cash.

There is so much packed into one passage as to reveal so much of what is wrong with “economics” as a matter of economy rather than statistics. The inference there is pretty clean with respect to philosophical evolution on Krugman’s part, one for whom money was the purview of only the central bank before. It seems rather obvious that Dr. Krugman received a tap on the shoulder about continually referring to “money supply” as if it were a generic monolith, and that his views of finance might need far more nuance to be avoid being outed as extremely dated.

The “safe assets” to which he refers is clearly a misreading of wholesale finance, or at least one stripped of useful knowledge (again, Socrates’ allegory of the cave; his column exposes that he is only trying to make sense of what are to him and economists just the shadows on the wall). He must have had notice somewhere of the continual pressing of the “shortage of collateral” to which his generic teleological upbringing simply assumes, as others, that government debt is the perfect substitute. Indeed, there is almost no doubt anymore that collateral is a huge problem, one that economists such as himself denied for as long as they could (the Fed was particularly dissuasive on this account until QE4 reality rudely intruded).

In fact, the paper he links to in that paragraph, from MIT, makes the assumption that there is a disparity only of “risk” perception amongst “market” participants. This comes out as, for the authors, a geographic dispersion that works out almost as, you can imagine given the favor of Krugman, a financial argument against austerity:

Our model illustrates the essence of SAM [Safe Asset Mechanism] and its implications for standard macroeconomic policy tools, but it leaves untouched critical considerations for the dynamics of the world economy in the medium term.

Given the faster growth of safe-asset-consumer economies than that of safe-asset-producer economies, SAM is only likely to get worse over time, absent major financial innovations. Aside from temporary cyclical recoveries in spreads and output, it is our conjecture that SAM will remain as a structural drag, lowering safe rates, increasing safety spreads, straining the financial system, and weakening the effectiveness of conventional monetary policy.

Emerging markets are growing (though not so much now, which threatens the conclusions already) but don’t contain collateral “necessary” for financial firms to cater risk metrics; developed economies create the sovereign “risk-free” securities that perform “safe asset” assembly. There is in that construction a very revealing update to the mainstream canon, but one that is far from comprehensive enough to be extracting and thus useful. In other words, as noted above, these economists are only now becoming aware of wholesale dynamics where banks only engage in lending via the mathematical properties and characteristics like volatility contained in VaR and other metrics.

Collateral is far from the only or even central design of wholesale finance; dark leverage is much more the powerful constraint or, in this hoped-for case, expansionary force. Even then, as when the eurodollar system was back before August 2007 operating on what looked like a stable basis, there is a fatal conflation here. The wholesale system simply believed, as Krugman mistakes now, that collateral could be sufficiently conjured and quantified to suit expansionary needs; that was what subprime actually was in this context. The eurodollar financial system took illiquid and ill-suiting subprime mortgages and turned them into “safe assets” which allowed rapid and truly scary monetary expansion. The only difference here is that Krugman and his MIT paper suggest that governments absorb the same dynamic as if that one change will avoid all the negative downstream complications (as if PIIGS weren’t enough of a real example against the plan).

I supposed if you make that concession you may think dark leverage is no longer necessary, but that is, again, a fatal conceit. Dark leverage was not just about turning “toxic waste” into safe collateral, but as a tool of balance sheet mechanics that did so much more, including and especially general liquidity that maintained orderly pricing of all of it. In other words, it isn’t just “safe” collateral that might be missing but the means by which that, risk included, was traded and dispersed without boomeranging back into its ground state of really just fantasy (subprime as “safe” always was that).

In short, what is and has been absent for so very long is actual collateral defined as true capital. The basis for the economic pyramid, one that would include rising wages as well as stable finance, is one where capital cannot be substituted by financial engineering shortcuts – yet, that is all these economists want to do now that they have glimpsed, clearly only briefly, the complexities of wholesale “money.” Economists have long wondered where all those QE’s ended up, and now having been shown how wholesale dysfunction has uniquely swallowed up all that monetary effort into the “deflationary vortex”, as Krugman has called it to unfortunate great effect, they seek only to take some of those surface constraints under consideration.

Real economic advance is itself the greatest provider of true financial collateral, replete with borrowers who don’t need securitized packaging sold with trillions in notional CDS to make their financial existence palatable. True economic gains are themselves all the collateral that should be needed, but in a financialized situation there can only ever be a shortage. In that situation, these grand elites conspire to just make it from nothing and assume it is the same as its natural and forgotten inspiration.

So we get policy that only wants to redistribute via government while falsifying yet more deep collateral, same as has been done for a few decades now. They wonder why there are no wages and how the financial system could be so persistently disorderly – to the point that “computer trading” can blow it all apart, repeatedly. Economists continue to conspire only to fake a recovery in the shallowest fashion possible, so why not do “better” what Wall Street apparently failed to do in the mortgage bubble?

Wages and repo demand an end to fraud collateral; time for capital. The last crisis was the perfect opportunity but it was instead corrupted by epistemic closure into only new means for the same types of financial engineering as if there could be useful and effective improvement upon alchemy.