Having To Do ‘It’ Again Is All You Need To Know

Having To Do ‘It’ Again Is All You Need To Know

I know there is tendency for shorthand in media, especially print, but there comes a time when bland or rote description is not just inappropriate but highly misleading. Obviously, all attention is focused on the PBOC not just in turmoil but in how the central bank responds. To say that frustration is brewing is a gigantic understatement especially from the orthodox perspective that cannot imagine how they would “let” it go this far. As such, when they get what they want it reverts back to the fantasy as if the recent past is no longer relevant.

Maybe that is the price and inevitability of finance the way it is in the “modern” sense. It was Louis Bachelier in March 1900 who theorized that market prices are brand new every day; that what happened yesterday holds no bearing on today. He wrote, translated, that “there is no useful information contained in historical price movements of securities.” That view opens the door to Wall Street’s statistical random walk and normal distributions – a weakness beyond kurtosis that perplexes continuously as long as Bachelier is taken seriously.

To think that what happened yesterday is completely forgotten as soon as the sun drops below the horizon is plain nonsense. You hear it all the time, particularly after August 2007, how “tail risks” are suddenly and again more plentiful than they “should” be. The panic ending in 2008 was really two, and both were not just “once in a lifetime events” they were essentially the same thing repeated! Yet, they have continued with frightening regularity to the point of almost exact repetition – a fractal intrusion on the random walk haze.

Into this theoretical deficiency, the PBOC has “cut interest rates” cheering up the faltering confidence of almost all markets around the world. The reason for the change in mood can only be traced to random walk amnesia because any true reading, of full incorporation about recent history, of what the PBOC has done would instead inspire more and severe dread. The Wall Street Journal:

China stepped up its credit-easing efforts by slashing interest rates and flooding its banking system with new liquidity, its second such combo move in two months aimed at battling a deepening economic slowdown and its worst stock-market selloff in decades.

The last time the PBOC did this was at the end of June. Right away, if you are even slightly awake and aware, you have to wonder what all the positive fuss would be since obviously the last did nothing toward accomplishing what today’s euphoria expects of the same thing. In actual context, what you see is the PBOC’s desperation upon full display, an engine of purported stability losing its grasp quite steadily.

That started with the outward appearance of China’s financial system to begin with; the yuan’s five-month trajectory behind the veil of something the PBOC was already doing. Once it emerged to the open disorder, rather than see the great wholesale disaster the media spun it around as yet another piece of “stimulus” because that is what is expected. What is really taking place is far different. 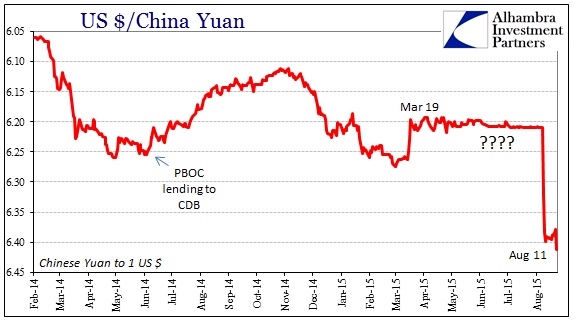 By the very nature of the yuan, whatever the PBOC was doing during that time didn’t work; to an extreme break. The internal capacity of yuan liquidity is directly tied, and even proportional, to the churn of external “dollar” availability. That, way beyond 100-year-old theory, links yesterday to today to tomorrow. In that context, the PBOC’s undressed anguish is perfectly clear: 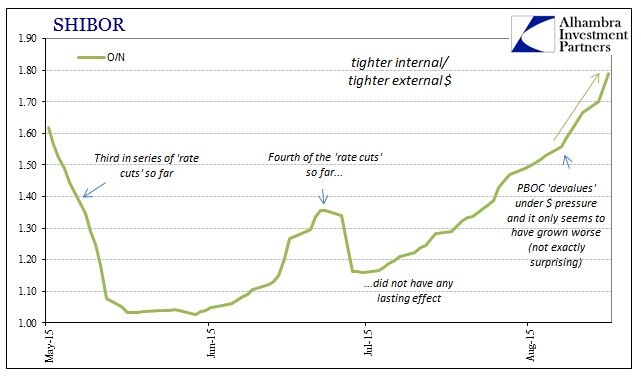 This liquidity issue only makes an imprint upon the shortest maturities, an acute financial sensation that pinpoints the method of disorder – “dollar” financing. Look at SHIBOR rates from early June forward on the chart above; rising precipitously before “forcing” the PBOC to cut rates just about two months ago. The “stimulus” of that was apparently lost on both the internal liquidity situation and the general economy since it had no positive effect whatsoever in either; both have only grown worse in the nearly two months since. “Flooding its banking system with new liquidity”, as the Journal classifies it, is as noted at the outset just inappropriate shorthand.

Therefore, in proper liquidity context, both internally and externally, nothing the PBOC has done to this point has been effective at anything about liquidity. Even the extreme wholesale “dollar” break on August 11 has failed to penetrate the “run”, as, in fact, internal problems have only gotten worse. The trajectory of SHIBOR, as one proxy of that, had actually steepened since the non-devaluation even as it has been accompanied by massive reverse repos in regularity now.

The cumulative reading of this central bank chronology might be fairly classified as “losing control” rather than anything resembling reassuring “flooding.” That the mainstream would choose the latter is only somewhat nuanced in that expectations might be open enough to absorb that dark possibility but not so much as to always think the “next one” might do the trick. In other words, the PBOC might not have had full success to this point, but there is believed some magic level of central banking that will inevitably fulfill every monetarist’s ardent dreams.

This is a perspective that we have become familiar with in more general economic terms, especially in that there were four QE’s even in America – the “cleanest dirty shirt.” Monetarists have been searching for the exact “quantity” of monetary influence that will engineer utopian existence, only to see those designs dashed time and again; and the response is, time and again, that it was just short of “enough.” The entire suite of socialist undertaking in the economy has projected that base note for the whole time, as even the now-derided “stimulus”, the ARRA, is still held by academics as if it would have worked had it been the “right” size.

So in China, the microcosm of monetarism and central banking; a financial discontinuity that is, so far, immune to all prodding. Monetary practitioners continue to see that as a temporary impediment that will fall away upon the “right” actions in the “right” amounts. A more measured and contextual interpretation might fairly conclude that the problem is far bigger than all that. At the very least, you would be forced to admit there isn’t anything random here, and that last week’s and last month’s failures are quite relevant to what should be expected moving on. 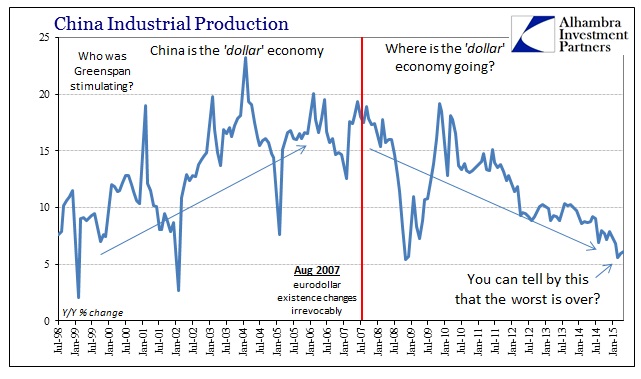 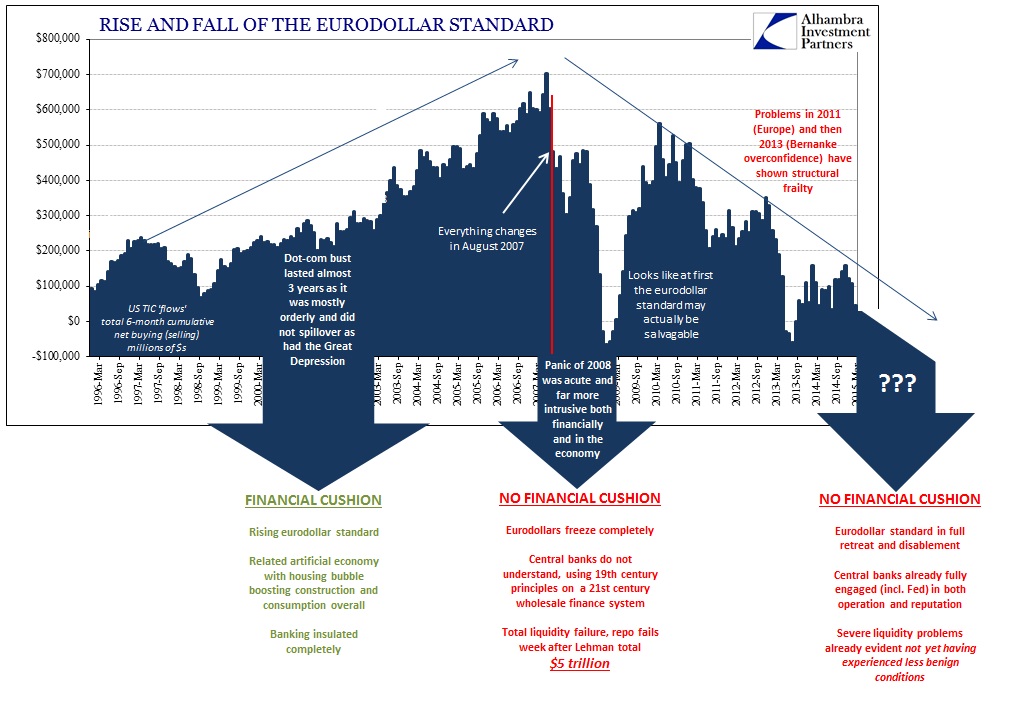 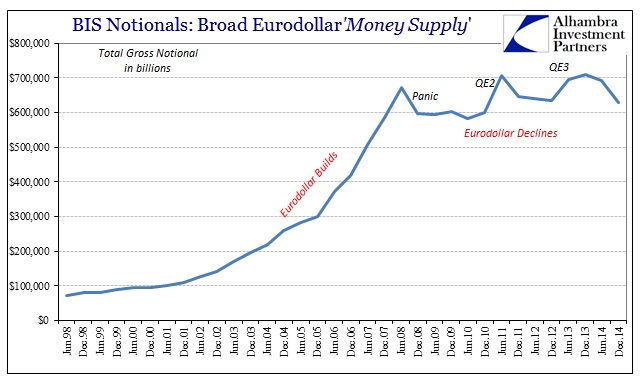