The moment you add the yen to any larger financial discussion it inevitably brings out passionate response. I think that is derived partially from its status as unbelievably durable; if there is one currency in the world that “deserves”, so to speak, ultimate execution it is that of the Japanese. The Bank of Japan has done more than any other central bank for far longer to kill it, but like any horror movie villain it seems immune to any reckoning or even the laws of financial sense.

In the bigger picture, that is as much a damning indictment as a tale of orthodox resilience. It shows that monetary redistribution is nothing but a trap, an incredibly narrow and locked economic existence that can and will be permitted by any sustained apathy. It is a cautionary tale that “markets” can become comfortable with perpetual dysfunction and disaster over time; distract investors enough with monetary magic and they will apparently forget all about more basic functions like impoverishment and general, sustained degeneration.

To the more immediate effect, the yen as related to financial markets elsewhere is always going to be tangled by the “carry trade.” The idea has become legend, as to whenever the yen moves starkly in one direction or the other the first commentary will usually “inform” of the carry trade potential. I have no doubt that it exists and even that it forms the great basis of yen involvement in so many spheres, but I think it more a means than an end.

What was notable about Japan during the past few weeks was the yen’s strengthening. Almost in lockstep with gold, it was quite clear that fear was driving both as the “dollar” was being run. Under less pressured condition, a tightening in wholesale “dollars” would typically find both the yen and gold in the reverse; the fact that they (and the franc) had become the opposite was a telling cue. 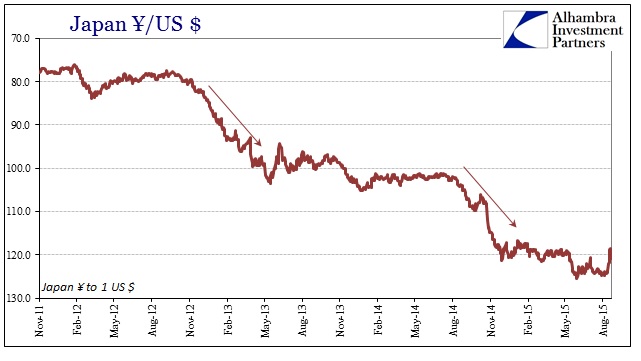 Any examination of the yen is drawn to the major devaluations, the most prominent of features in its chronology of the past few years. However, despite that seeming one-way direction there have been a couple of noteworthy exceptions. The first was (below) starting May 22, 2013, and running through the middle of June that year. Recall that May 22 was the onset of the credit crash after the first utterance of the word “taper” and that the selloff ran through to June 24, especially MBS and eurodollars. The yen, rather than continue against such a “strong dollar” instead itself appreciated jumping from a low of 103.50 to 94.30 by the end of the episode. 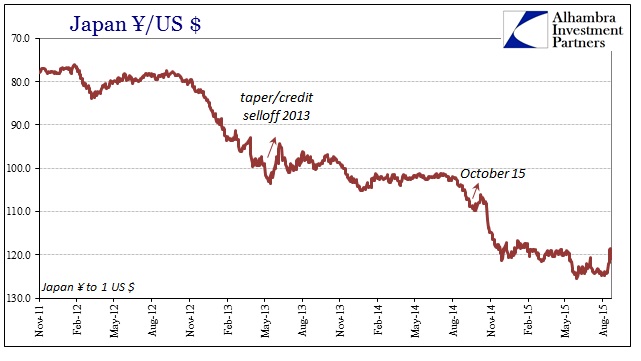 In the past year, as the “dollar’s” various runs have become more frequent and globally involved, the yen has staged a couple of these same reversals to smaller degrees. The first was October 15, going from 109 to 106 which sounds like almost nothing except that it interrupted, prominently, right in the middle of the second major devaluation. Since that time, these counter moves in the yen have matched perfectly other “dollar” runs; one ending on December 16, 2014, as junk bonds and the corporate credit bubble was hit; one ending on January 15, 2015, when the SNB was forced to break its euro peg from “dollar” pressure, marking the first major central bank warning. 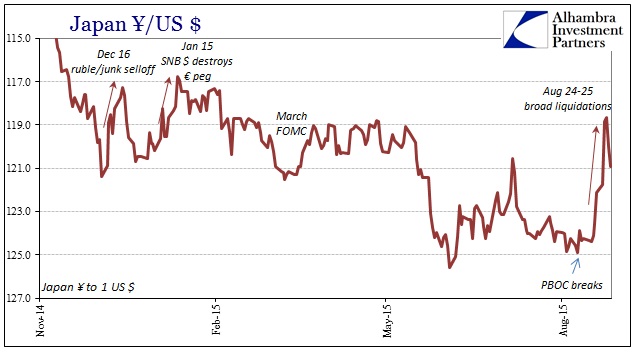 You could even add another yen appreciation in early March, ending just after the March FOMC. Finally, there was the largest yen “safety” bid so far, a huge spike that began August 19 as the “dollar” system was run further toward its ultimate global liquidation point. Was that the carry trade unwinding? Most assuredly, but not for or of itself and certainly not because of factors in Japan. In other words, in these specific episodes at least, the carry trade was likely just one method of expressing broader uncertainty and then fear against US assets. To my view, that is an enormous statement itself given the rather deserved disdain for the yen.

We knew liquidity globally was under great strain in the weeks prior to this Monday’s stock participation, but the yen, franc and gold also showed clearly that general fear was moving into that situation as well; that is, obviously, a shift and an unwelcome one given what transpired. 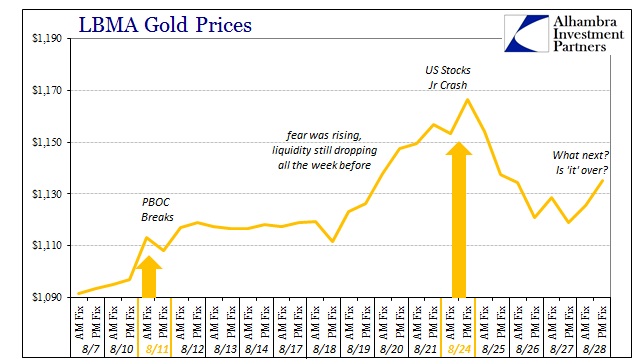 Is it over? From these indications it may not be, at least not yet fully. Gold has been higher today (both through the AM and PM fixes) while the yen is still lingering around 121 rather than the 124-125 range prior to the PBOC’s defeat. Stocks may be more sanguine, but in the bubble age that is an almost permanent feature making them the last in line of the liquidity train to “get the message” (discounting mechanism? Not for a long time). It would be reasonable to assume then, despite the “dollar’s” more immediate pause across the financial system this week, not everything has resumed ignoring these deeper funding issues. That may, of course, dissipate next week or however long into the immediate future, but for now, having been subjected to a very serious move, the “system” doesn’t seem quite ready yet to just move on (interesting also that UST’s were bid starting yesterday afternoon until this morning; 10s were 2.20% in yield around 1 pm yesterday and falling to 2.13% before reversing yet again around 10 am).

In many ways, you expect gold to behave in this manner even against its more nefarious “dollar” connections that have for a few years now been pulling it steadily lower – there was always a safety bid awaiting some more aggressive disruption. To see the yen and the franc participate too, and to such a heavy reversal, seems to suggest just how far into the interior of even the domestic foundation this “run” progressed. We knew it was a grave period by the very fact of knocking the PBOC so unsteady as it did, but these other moves add unconditional confirmation of what it really was.