It Was Never An Option

It Was Never An Option

In her testimony before Congress in July, Janet Yellen laid out the same talking points that have been propagated onto Americans time and time again these past eight years. The economy is moving forward and the Fed is doing and has done everything it can, and that there are “green shoots” still though no full and mature growth.

Low oil prices and ongoing employment gains should continue to bolster consumer spending, financial conditions generally remain supportive of growth, and the highly accommodative monetary policies abroad should work to strengthen global growth. In addition, some of the headwinds restraining economic growth, including the effects of dollar appreciation on net exports and the effect of lower oil prices on capital spending, should diminish over time. [emphasis added]

Given that this was July, her bland, boilerplate words were not at all cognizant of what was building; but they should have been since it is her job to notice “dollar” pressures, particularly where that might turn out into a devastating global run. It is those two words quoted above that are most frustrating and most damning in so many respects. It is difficult to suggest, especially now, how the rest of the world has been “highly accommodative” toward growth and how that will be the luck of salvation for this darker economic turn in 2015.

You can take issue with everything spoken within that quoted paragraph but in August 2015, turning now September, it is globally “highly accommodative” that will burn the most. At first, as is typical now, China has sunk (in its economy) erasing all hope of rebound. After three months of seemingly accelerating industrial production, which convinced every economist around the world as extrapolated “proof” the bottom was in, it fell back in July to just 6% – barely above the worst levels earlier in the year. Retail sales also turned down, though slightly, while Fixed Asset Investment (both total and private) continue on with new cycle lows. 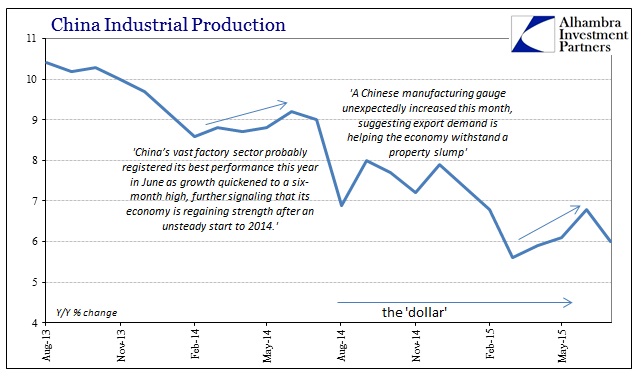 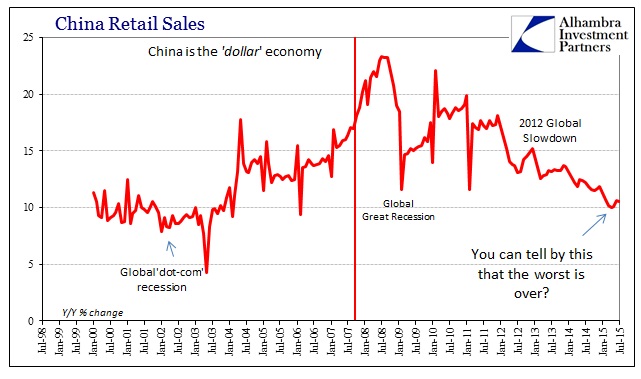 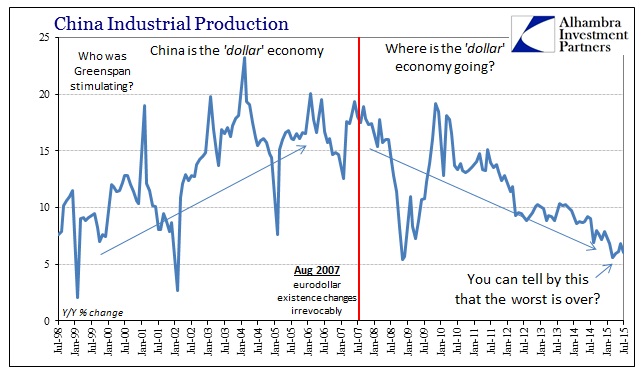 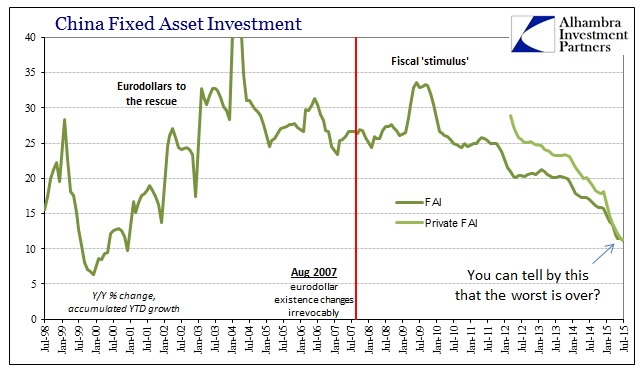 Given the internal situation in China, beyond even the “dollar” short, it is depressingly difficult to see how this comes out in any other way. Overcapacity is the only dominating feature there, and it is traced directly to “highly accommodative” past policy that did nothing but foment future economic destruction; monetarism “buys” short-term activity at a very high future price which is why GDP should be kept in at least two separate accounts that recognize balance sheet considerations like “value.” China’s ghost cities and empty factories are legend, but just going by mainstream media attention you might get the impression that this was something new or that China’s recent struggles are finally permission to finally talk openly about it:

Miao Leijie loses money on each ton of cement his company produces. But stopping production is not an option.

When the plant opened in 2011 to supply the real estate and infrastructure industries in the northern Chinese city of Changzhi, the company raised most of the initial money from banks. Now, Mr. Miao, the factory’s general director, needs to keep churning out cement simply so the company can pay the interest on its loans.

The year the plant opened is not coincidence to the overall economic story in China, as the chart on Fixed Asset Investment above shows too well. In the face of America and Europe dropping into an almost-depression in 2009, the PBOC did what they were “supposed” to do by being “highly accommodative.” That monetarism was intended as a short-term stopgap simply to bridge the divide between the Great Recession and the recovery that was expected to bring the global economy back to its prior, pre-August 2007 existence. That meant, for China, still more capacity to meet what would surely be a return to robust foreign “demand” for its manufacturing centers.

Wang Xiaohu has not completely given up hope. Over the years, Mr. Wang, a 40-year-old businessman, put 20 million renminbi, or $3.1 million, into Changzhi Ruili Building Materials Ltd., which can produce 300,000 metric tons of cement annually. But now the factory site is watched over by a lone, elderly security guard in an ill-fitting uniform. Mr. Wang was forced to idle the plant about 18 months ago, laying off nearly all of his 100 employees.

Mr. Wang, though, has refused to liquidate the factory. Instead, he maintains the machinery, waiting for the day when the economy revives and he can produce cement once again — a day that even he acknowledges may never come. “Many of the small and medium cement plants here are like this,” Mr. Wang says. “The chances are slim that they will ever reopen.”

As these Chinese factories sit idle or nearly so in anticipation of “some day”, the very same “some day” that Janet Yellen speaks about so consistently that the words are almost identical each time, Brazil just registered its worst economic quarter in a long, long time. That wasn’t unexpected, for once, but the statistics are even worse than anticipated. Brazil can no longer wait for China’s waiting to end:

“We are nudging down our forecast and now think the economy will contract by 2.5 percent this year,” the London-based firm Capital Economics wrote in a Friday research report, noting that previously it forecast a 1 percent drop. “As expected, the driver was a complete collapse in domestic demand … This is a shocking report.”

Like most Latin American nations, Brazil has been hurt by the plunge in commodity prices and the slowdown in China, which has been a big buyer of Brazil’s soy, iron ore and other commodities.

Brazil is caught between both decaying currents of “highly accommodative”, rocked on the one hand by an export sector that won’t restart and then its people stripped of continuing purchasing power by out-of-control prices tied to that which Janet Yellen will keep to ignore. In this “highly accommodative” fantasyland, Banco do Brasil has been “forced” to futilely raise its benchmark rates to chase a eurodollar system in “tightening” decay globally. The central bank, which had made the country’s “dollar short” much, much worse in 2013 at the first stirring of this devastating devaluation, cannot accommodate much of anything as the economy falls off the cliff while “inflation” spirals further and further into the nightmare. 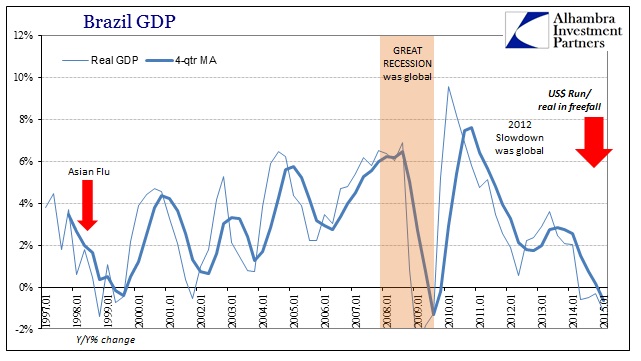 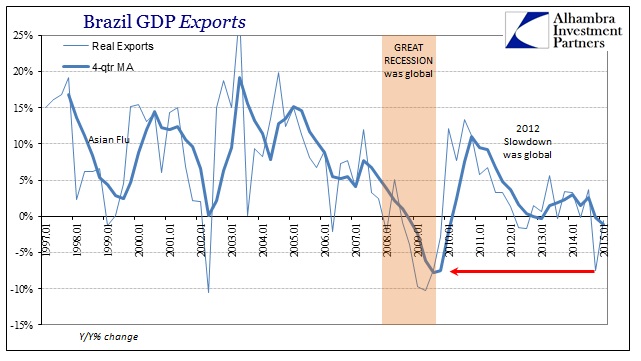 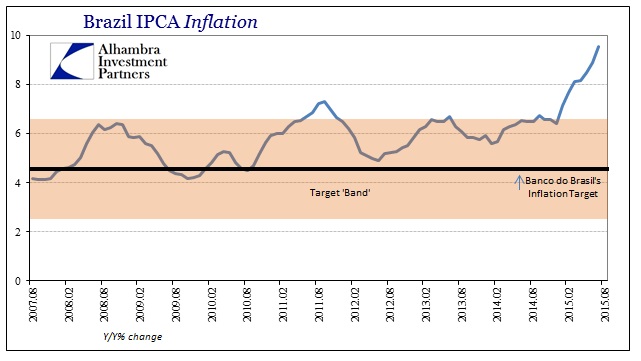 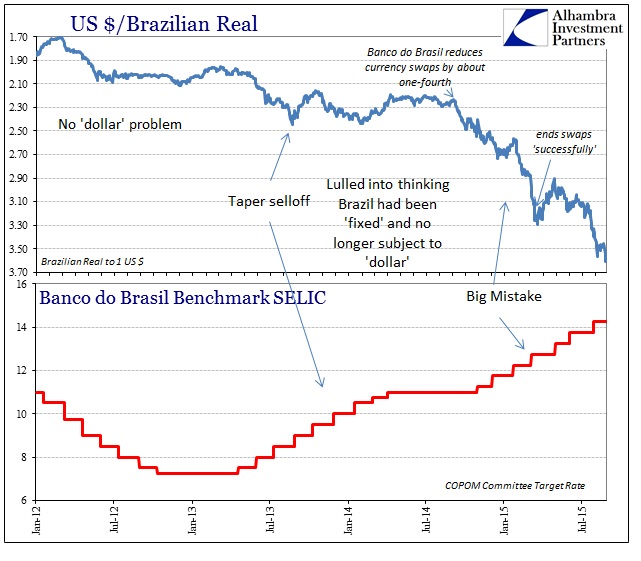 When Banco undid some of its dollar “swaps” in September last year, its SELIC rate was 11% and the real seemed steady in orthodox perception at 2.3 to the dollar. Now, again “highly accommodative”, the SELIC is 14.25% and the real has sunk to an-unthinkable 3.6! The result, again the squeeze, the economy falls off while “inflation” surges toward 10%.

Brazil boomed for several years on the back of a middle class that expanded by some 40 million people since 2003. Suddenly flush with easy credit, they went on a sustained spending spree, upon which Brazil’s government built its economic model.

That spree started to sputter about three years ago and is now officially dead. Many Brazilians are in debt over their heads and are cutting spending severely. Household spending reported Friday fell 2.1 percent as compared to the previous quarter. Rising inflation, unemployment and tightening personal credit have added to souring consumer confidence.

Three years ago was 2012, the very same time that the entire global economy suddenly and “unexpectedly” started to sink everywhere – including Janet Yellen’s US, though she would have to wait three years to actually see those distortions. Like China, Brazil’s rise was nothing more than the same monetary illusion, but not one that had anything to do with the internals of local central banks except in derivative response to the overriding factor in all of this – the “dollar.” These economies were built and premised on “dollar” financialism being the dominant and permanent global feature, as the Fed itself has surmised and even developed its own plans, QE’s and ZIRP, around. In this age of voodoo “demand”, the results are exactly that as no matter how much “accommodation” is meted out for however long, it produces nothing toward the intended results of long-term economic stability. Month after month instead we see central bank after central bank fall helpless before the eurodollar steamroller.

The “dollar” system is dying and it is taking the global economy with it. After all, the Chinese built their economic “miracle” upon the world’s taste for financialism and even the historic burst of monetarism in the aftermath of the first run at rebalancing against it; China’s exports to the US were before the Great Recession typically growing at 20% and even 30% but now have come to an almost complete halt. The dead capacity built to service that resurrection is now a further weight upon what was already greatly misaligned. Again, there is no “demand” anywhere and nothing that central banks can do to relight the spark of illusion. They must instead weather the inevitable reversion and now for a second time because they didn’t see the first for what it truly was – not just a warning against doing it all over again, but that going back was never really a sustainable option.