Brazil Counts For, And Explains, A Lot

Brazil Counts For, And Explains, A Lot

Setting aside wholesale financial reasons and implications, the crash now in the Brazilian real is not good for anyone. It is, obviously, a disaster for Brazilians but the utter implosion heading toward disintegration in the world’s seventh largest economy (and what once was third in terms of marginal expansion) is both a warning and reflection. The economy there isn’t going down on its own, but even it if was this would be a very troubling sign.

Brazil’s industrial production plummeted in July and fell well below economists’ expectations, in the latest sign that Latin America’s largest economy is entering a tailspin.

Industrial output fell 1.5% from June in seasonally adjusted terms and was down 8.9% from July 2014, the Brazilian Institute of Geography and Statistics, or IBGE, said on Wednesday.

The median forecast in a survey of economists by the local Agência Estado newswire had called for a 0.1% contraction in July from June. The worst estimate foresaw a drop of just 0.6%.

The mainline narrative will be that Brazil is just Brazil or even that emerging markets have their own bright dividing line, but the fact that of the nation’s close relation to both China and the “dollar” demonstrates how wrong that assumption. At some point, even the most resolute of closed-system monetarists might notice the unified correlations of the “rising dollar” and gaining global depression to the point of frequent and unrelenting financial “anomalies.” While that admission will no doubt take form of “hot money” flows, it is only a step further to realize in the wholesale system this isn’t a zero sum game – Brazil’s decline is monetarily and economically our own.  In many ways, this is worse than the Great Recession as the contraction is both severe and unrelenting (industrial production has declined for 17 consecutive months and 20 out of the last 21; in contrast during the Great Recession Brazil’s IP fell for only 12 months before sharply rebounding). 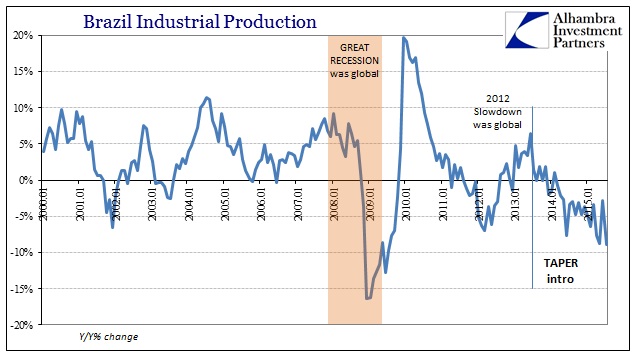 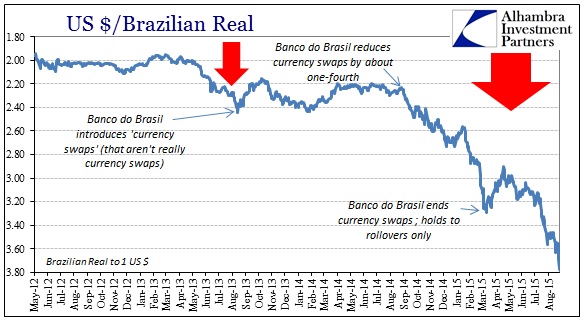 As we saw on August 24, the Chinese experience with the wholesale run wasn’t at all what the textbooks say about “hot money.” In other words, that idea assumes that a dollar withdrawn from China or Brazil finds itself instead deployed in the US or Europe; not created or destroyed just redistributed. The wholesale reality is quite different, since a “dollar” withdrawn from emerging markets does, in this acute state, simply disappear altogether. Worse, that very act of extinguishment is cause for further disappearance more generally, so that China’s “dollar” disruption can lead to even US stocks (and junk debt) crashing.

That will, I fully believe, continue until a more stable reset; either the global “dollar” becomes encouraged by a rapidly brightening horizon (maybe QE5 would stabilize liquidity, though it might just as well confirm the worst) or “dollar” systems have to more closely align to the failed recovery promises. In Brazil, that is showing the world the worst case of that latter reversion.

The real is crashing again this week, having traded below 3.8 just today. Other “dollar” proxy currencies are similarly dropping though not nearly as severe. That might suggest the real caught up in just Brazil’s particular nightmare but there is a lingering, though broad, sense of angst. Copper and crude are bid today, but both have been seriously volatile of late. The franc has shifted back toward devaluation away from safety, but that isn’t a positive signal about “dollar” funding in general either. Meanwhile, both the yen and gold are still elevated; the yen stuck around 120.5 rather than 124-125. Even the eurodollar curve remains in limbo, as seen by the June 2018 contract (which I think is an important maturity in this context) which remains close to 98.00 – 98.10 rather than being sold off sharply. 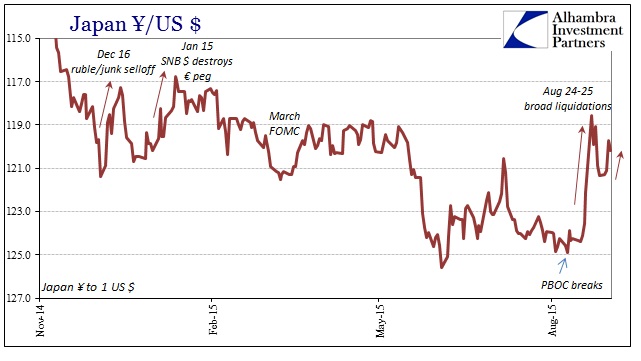 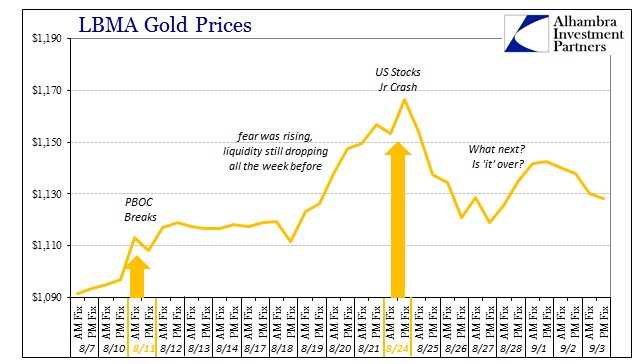 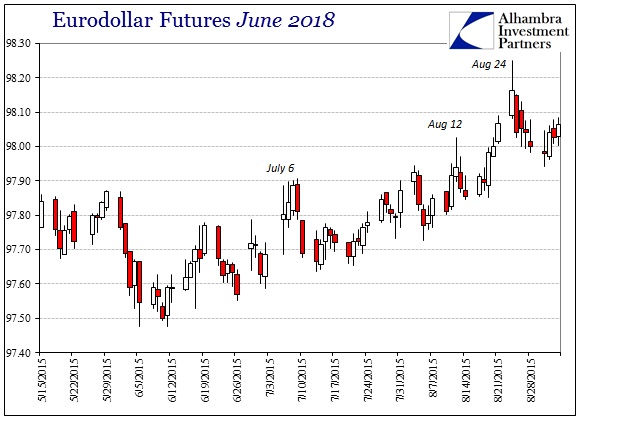 This is quite unlike the period after either January 15 or March 18 (FOMC) where almost everything retraced after the “dollar” pressure subsided. Here, again, the lingering shakiness is notable now almost two weeks past the worst of it so far. I think that is quite related to these deteriorating economic conditions (as Brazil, as Europe). Whereas in January or March the true downside probabilities were more intangible and ephemeral concerns (“transitory” now much less believable), they are becoming increasingly real and conforming far more to the worst cases – in fact, where Brazil is most relevant, even worse than what was thought to be the worst case back then.

So it seems that while the “dollar” isn’t in uniform turmoil right now, it is still a problem across a wide enough surface that where it isn’t directly that does not suggest optimism is being revisited. Rather than hope as before, there is continued, palpable anguish. 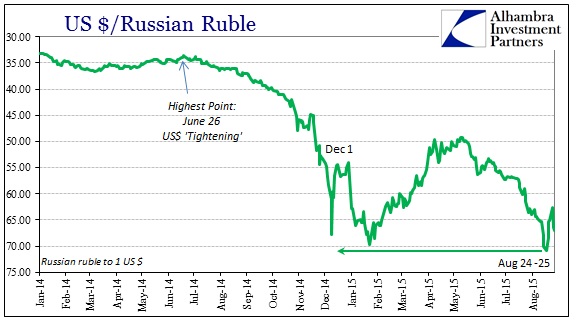 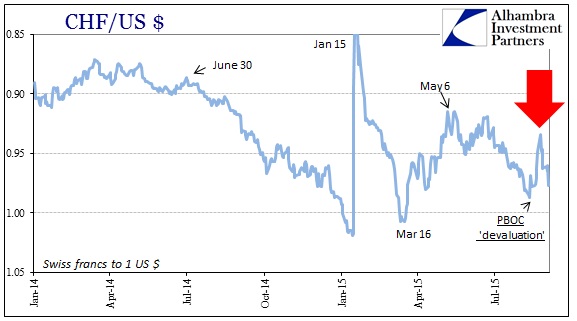 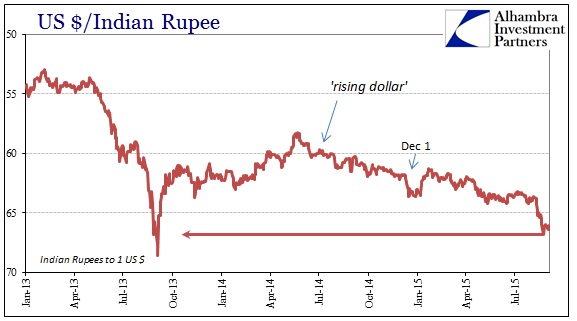 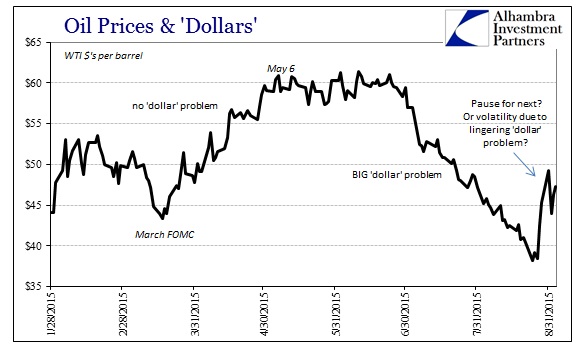