The Spread of Globalizing Mess

The Spread of Globalizing Mess

In a world saturated by derivatives, the concept of a bellwether of a bellwether might actually make sense. If China is one for the global economy then perhaps South Korea might be it for China. Unlike Japan, South Korea hasn’t had the yawning chasm of QQE to alter its balances, therefore the level of shipments particularly to China offer perhaps a purer view of activity inside that country from a useful external perspective. Unfortunately for those expecting to see the Chinese miracle reassert itself, Korean data for August (released September 1) was just ghastly.

South Korea said exports posted their sharpest fall in six years in August as shipments slumped to China, the country’s largest export destination, amid concerns about a slowdown in the world’s second-largest economy.

The South Korean data provide the first picture of trade for the full month of August in the region after a currency devaluation in China on Aug. 11, which was followed by wild financial market gyrations and jitters about sputtering Chinese growth.

South Korean exports shrank 14.7% from a year earlier in August to $39.33 billion, according to provisional data from the Ministry of Trade, Industries and Energy. The August reading missed a market expectation for a decline of 10%. Exports have been in decline for eight months in a row.

Given China’s economic malignancy, the state of Asian trade and thus the Asian portion of the global economy has been thrown further into turmoil. In that sense, the “dollar” once more acts as catalyst and signal for the crosscurrents of finance and actual activity. It may give off appearances like that of 1997, but the downfall of China suggests far more than that; where Korea suggests more for China.

Today, the Chinese confirmed not just the dragging nature of the decline but once more its severity. On the import side, data had been more hopeful in June and July (again, coinciding, lagged, with the pause in the “dollar” waves) as imports “only” declined by 6.3% and 8.2% in those months, respectively. Compared to earlier in the year, those rates seemed almost downright growth particularly to economists hungry to extrapolate even the most minor and short run variations. August, however, pushed China (and thus Asia) back into the “this can’t be happening” column:

Export weakness last month was broad-based, ANZ economist Li-Gang Liu said, with shipments to the U.S., European Union, Japan and Southeast Asia all down. Earlier this year, the World Trade Organization lowered its 2015 global trade forecast to 3.3% from 4%.

Imports in August fell 13.8% in dollar terms from a year earlier, compared with a 8.1% decrease in July, fueling another significant trade gap, Customs said. China’s trade surplus widened in August to $60.2 billion from $43.03 billion in July.

As for the export numbers, there isn’t any mistaking what they mean as even mainstream media recognizes, finally, this is not a problem for China alone.

China is hogging the headlines once again, with trade data the latest evidence that the world’s second-largest economy is slowing. Imports and exports dropped in August, highlighting tepid demand at home and abroad.

The problem with the convention of “tepid demand” isn’t actually arguing about the degree to which contraction may have set in. At -5.5%, exports aren’t crashing like in the worst parts of the Great Recession but there doesn’t appear anything to signal a turnaround. So “tepid” is really a static description of an ongoing issue that not only lingers, the more it does so at this level risks amplifying into what would actually be worse than 2008 – something like Brazil where, due to the strong “dollar” interaction, there just is no sense of any bottom even after more than two years of straight contraction.

Somehow, “markets” were enthused by the Chinese data not as a commentary on being better than hoped (which it wasn’t) but rather that the PBOC will now have no choice but to stop dragging itself into “stimulus.” I don’t get that sentiment at all given that “stimulus” has been plentiful globally to the point of overabundance, to which it has been received in almost proportional but inverse economic fashion; the more central banks seek to induce aggregate demand the less of it that arrives. Again, that was the main component of these bellwethers, that global growth is and has been “tepid” already and turning once again in the wrong direction. 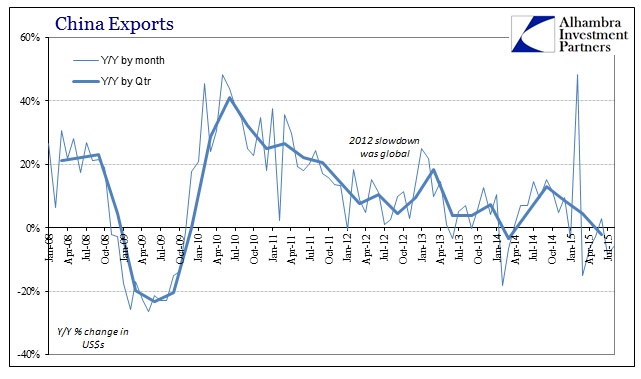 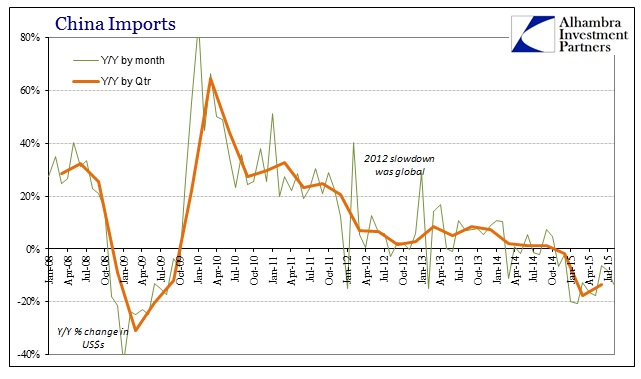 That last part is certainly the view of the “dollar” especially upon China in late July/August. It hasn’t really let up though it does seem to have relented in terms of acute pressure. The PBOC has been able to allow a tighter, appreciative yuan fix for most days since August 24 (so much for “devaluation”) until last night. Accompanying depreciation in the yuan was the usual internal illiquidity, as the PBOC unleashed yet again CNY150 billion in reverse repos; which means, in global wholesale language, the “dollar” still has China in its crosshairs even if that fact is obscured by the lack of open disorder and chaos.

It is under these terms that such “stimulus” expectations are not just unrealistic but simply absurd. The PBOC itself has cut interest rates (benchmark deposit rate) five times going back to November last year. What is most interesting about that is how the last three, including the latest on August 25, have simply underwhelmed in every possible manner. Not only has the Chinese economy failed to respond even slightly, the internal liquidity mechanics (which is what “stimulus” is supposed to render) are likewise subjugated to the “dollar’s” continuing run of whatever dynamic intensity. Again, we get a good sense of what trouble the “dollar” is causing by what is being driven into yuan. 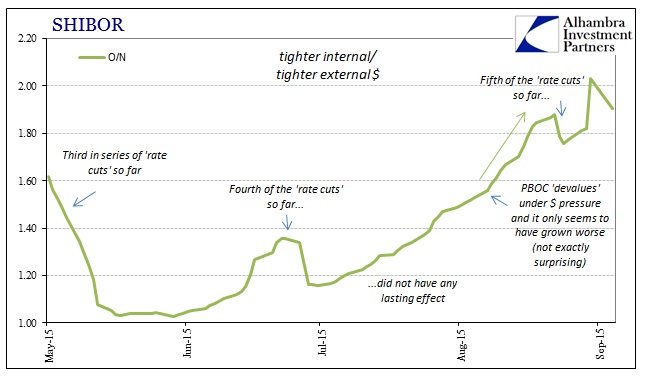 The whole sense of this Chinese decline offends orthodox sensibilities in every possible direction which is why they can’t seem to make sense of any of it. Not only do you have an “impossible” Chinese economic recession persisting, it is itself not just Chinese. And where the yuan is supposed to make China’s problems its own, the wholesale reality of the “dollar” and yuan combines and unifies all of it where economics takes just discrete parcels into consideration.

That is why today “markets” might well be enthused about Europe’s Q2 GDP being revised from 0.3% to 0.4% at the same time of the PBOC’s undoubted “stimulus” when instead it might better “discount” South Korea’s exports to Europe falling 21% in August – much worse than shipments to China.