Durable goods continue to contract, with August down year-over-year in both shipments and orders now. New orders have been contracting since February (with January barely positive) at an almost steady rate near -3% the last few months, while shipments did not see a negative rate until May (and were slightly positive again in June). In capital goods, the pattern is the same though the disparity worse. The 6-month average for capital goods orders is now -3.72%, while for shipments +0.35%.

Those figures would seem to reflect the disparity viewed from inventory. Given lags in the supply chain, the fact that shipment expansion seems to be climbing over the edge may signal the expected change in economic perception about the inventory “bulge.” That would be consistent with the sales environment, particularly wary outlooks now for the Christmas season that was only a “transitory” away, as the mainstream has told us, from a blowout. 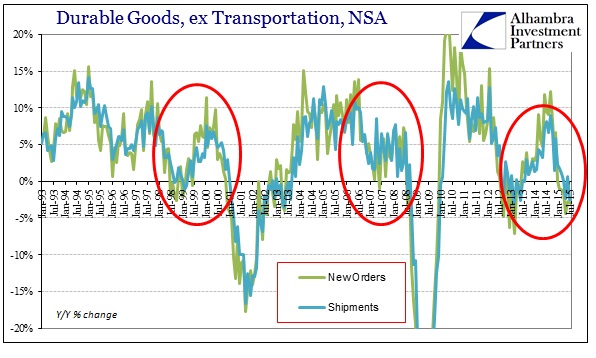 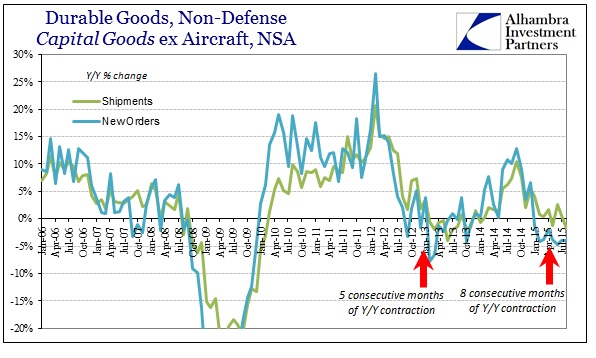 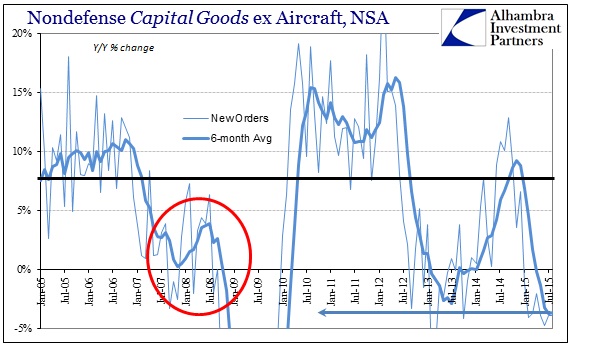 As usual, the conventional commentary for this continued slump and contraction is that the US economy is “strong” while concerns are somebody else’s:

The underlying demand for manufactured goods has been weaker this year as a strong dollar and China’s economic slowdown have dragged down demand for American exports and big declines in oil prices have resulted in cutbacks in investment by energy companies.

What really matters is that it is now September and there are still excuses being made about the economy (since this “slump” has now long outlasted snow, winter, port strikes and even summer storms in China). It’s a far cry from last August’s durable goods report even though there was an 18% month-over-month decline (though it was expected from Boeing’s influence the month prior).

Such “fuel” seems to have melted into the stew of apologies that prevail this year in one “unexpected” month after another. The same economists point to GDP as if it were the only measure that mattered, or the unemployment rate as if it was actually measuring unemployment. To ignore the unified basis of the US economic outlook, as retail sales, durable goods, wages, etc., in favor of those statistics will lead you to, and leave you at, Larry Kudlow:

At his year-end news conference, President Bush stated with optimism that the economy is fundamentally sound, despite the housing downturn and the sub-prime credit crunch. The very next day, that optimism was reinforced with news of the best consumer spending in two years. The prophets of recessionary doom…have been proven wrong once again.

Jobs are rising over 100,000 per month and the stock market is set to turn in a respectable year despite enormous headwinds. Low tax rates, modest inflation, and declining interest rates continue to boost Goldilocks, which is still the greatest story never told.

That economic story was never great nor ever told because it was orthodox fantasy; those words were written on December 21, 2007. At least then there were some good economic reports to provide such utterly false hope (durable goods orders and shipments rose solidly in both January and February 2008, nearly 7% and 8%, respectively, after producing a “concerning” +2.8% in December 2007). It is about accumulation of negative results and outcomes, not headlines or economists’ stolid, unflinching regressionary tendencies which cling to the orthodox baseline (as Kudlow) no matter what. Trends matter; perpetually shifting justifications, and the intensity which they are delivered and repeated, can be illuminating for them as much as the data.