‘Lower For Longer’ Is Losing

‘Lower For Longer’ Is Losing

Asset markets on Friday reversed course after fully digesting a payroll report that has been universally assailed. The thinking is, apparently, that the Fed will have no choice but to stay on the sidelines now. That view is certainly bolstered by the FOMC’s inaction already in September, so worsening economic fortunes in the US apparently removes any flexibility anytime soon.

U.S. stocks staged the biggest intraday turnaround from a loss of more than 1.5 percent in four years, as a weakening dollar fueled a rally in commodity producers. Treasuries surged on speculation the Federal Reserve will keep rates lower for longer after a disappointing jobs report.

It was obviously infectious, as the wave of exuberance swept up globally:

In the end, European stocks rebounded as bad news for the U.S. economy fueled speculation that the Federal Reserve will delay raising interest rates.

The Stoxx Europe 600 Index added 0.5 percent to 347.86 at the close of trading in London. The equity gauge earlier rose as much as 1.7 percent before payroll data sent shares sliding 0.9 percent. Stocks also reversed gains yesterday after a report showed U.S. manufacturing deteriorated in September. The oscillations highlight nervousness about global growth prospects amid mixed signals from the U.S. and China

But you can already see the internal inconsistency in the price movements: “bad news” is taken as good because central banks will be forced to take more steps to fix those “bad” economic elements despite the fact that all prior efforts are increasingly realized to have had no discernable impact in those areas whatsoever. And that inconsistency was registered in various markets less prone, the past few years, to these kinds of increasingly desperate rationalizations.

Energy and raw-materials producers surged as commodities from oil to gold rallied. The yield on 10-year Treasuries sank below 2 percent for the first time since August, while a dollar gauge weakened to a two-week low.

Gold doesn’t belong in the same expression as what commodities were doing Friday. Gold was as the UST market. The US dollar gauge may do whatever, but the “dollar” itself was not enthused about anything taking place on Friday one way or another. In fact, eurodollar trading et al, including a solid safety bid in gold and UST, were rather decisive in interpreting the situation more comprehensively. In other words, while mainstream commentary still applies some central bank magic as “stimulus”, and some risk assets like stocks are desperate to still play along, the true realization about payrolls is that the current trend in both economy and finance has little to do with central banks apart from their policies being thoroughly discredited.

Bond prices climbed on Friday after a weak U.S. employment report increased worry about slowing global growth, while global equities were able to rebound from an initial selloff to close with strong gains…

Bond prices jumped, with benchmark U.S. Treasury yields falling to their lowest level in slightly over 5 months. The 10-year U.S. Treasury note was last up 17/32 in price to yield 1.9824 percent.

Again, the inconsistency across asset markets is jarring especially since the US was supposed to “decouple” from economic woes limited to EM’s or China; now the US is as concerning as all those, with an increasingly fearful uniformity in those trends. In terms of what has been forming in 2015 in the US and global economy, bonds and the “dollar” have been “right” so far while stocks and last year’s certainty about recovery and full booming growth are nowhere to be found (even the Establishment Survey, for all its subjective over-optimism, is much, much less glittering). In that respect, nothing has changed so stocks and some risk assets look to be finding an excuse to bounce and hoping beyond hope that there is something “to it.”

Counting on more monetary “stimulus” to be effective and useful, however, is a little further beyond inconsistent. Monetary policy is not the marginal catalyst; the “dollar” is and there isn’t anything available that might durably and sustainably alter its course. Banks appear quite determined to exit the eurodollar, making that the base case over all else.

In fact, this “on hold” rate dance has been repeated throughout this year producing much the same short run, ephemeral euphoria. From June:

US stocks and bonds reversed earlier losses and finished Wednesday’s session with gains in response to renewed pledges from the Federal Reserve Board to keep interest rates at historically low levels for the foreseeable future.

Two months later, with the FOMC still “on hold”, stocks crashed. Back in late March, after the March FOMC meeting that altered perceptions of the Fed’s timeline, stocks also jumped:

Remember all those worries about earnings and the economy that caused a big slump on Wall Street last week?

Yup, investors have forgotten all that. The market is back in rally mode. The Dow rose more than 260 points Monday, or 1.5%. The S&P 500 and Nasdaq both rose more than 1% as well.

Here are three reasons why it was something that Susanna Hoffs would call “just another manic Monday.”

In a speech released just 15 minutes before the market closed, Yellen made it painstakingly clear that she does not think the United States economy is anywhere close to its full potential.

And in the immediate aftermath of that March 18 FOMC (non)decision:

THE FED EFFECT: The statement from U.S. Federal Reserve Chair Janet Yellen took investors by surprise, and interest rates are now expected to head higher but at a slower pace than previously thought. The Fed has held its benchmark interest rate close to zero since 2008.

Even as far back as February, when stocks were last flirting with new records:

Stocks closed February with big gains thanks to early-month rallies tied to a rebound in oil prices. Markets were then able to hold on to these gains given low volatility over the final two weeks of the month.

After Federal Reserve Chair Janet Yellen addressed Congress earlier in the week, Dudley reiterated the central bank’s commitment to patience while speaking at a monetary policy forum in New York on Friday.

We don’t really know what causes markets to move one way or another in such short time periods (except for obvious, general liquidations), but the fact that this narrative is attached with each of these short-lived rallies is just as significant in terms of rationalizations. “Lower for longer” has been the upfront policy position all year, which has contributed nothing about the economy and stocks seeing those records. Instead, the global system has been rocked by an independent wholesale “dollar” tightening that threatens yet more unknown but increasingly relatable downside and little as far as plausible upside. The asymmetry of that risk is why eurodollars, gold and UST’s are bid no matter what the Fed does or does not do. Again, Janet Yellen doesn’t factor though you can appreciate why there is still some lingering, misplaced hope that she might. 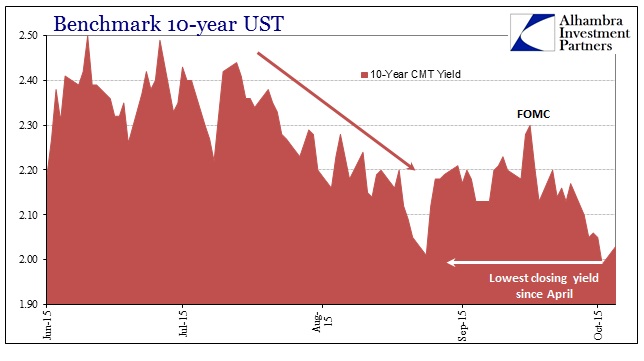 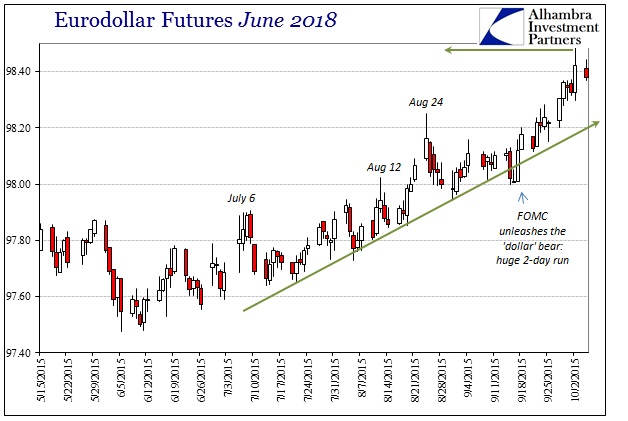 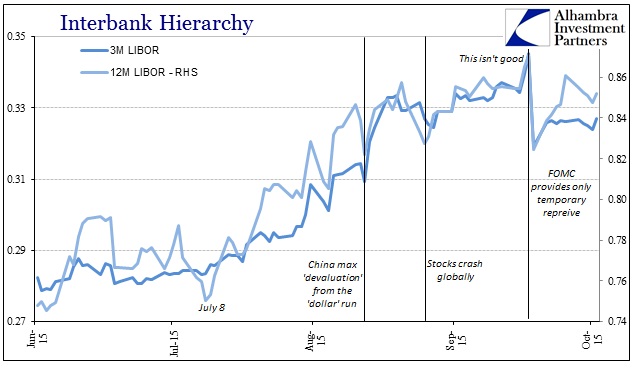 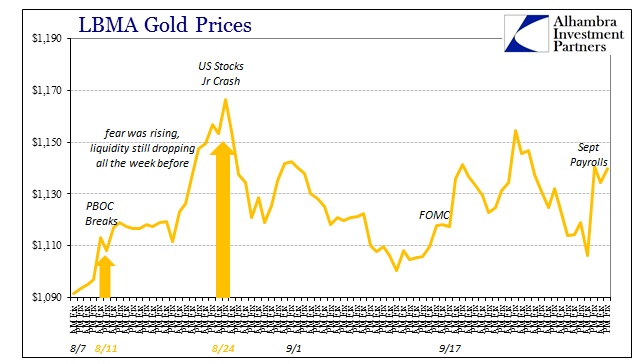