Is The ‘Dollar’ Missing Something This Week?

Is The ‘Dollar’ Missing Something This Week?

It has certainly been much calmer in October so far, especially compared with the deep deviations following the FOMC’s lack of activity. Stocks have rallied since October 1 along with many commodities, especially crude. Currencies have been almost mellow, with the ruble following oil prices upward, the real departing (for now) from its devastation and even those like the Indian rupee trading at its highest price since the PBOC broke. Is this a genuine reversal forming, perhaps as much as even minimal flirtation with general optimism?

It has certainly been described that way in the mainstream, as the relentless “unexpected” contraction has, so they say, given up to dancing dreams of central bank rescues yet again. Or has it?

That may be the case, and stocks, in particular, are counting on renewed “stimulus” to perhaps figure out what all prior and vast monetarism never could. However, eurodollars continue to press at a strained elevation, though not more so than before this week. The junk bubble has been sold heavily, with rates, prices and indices stretching even further back to the worst days of 2011 – though, it should be pointed out, some buying did appear yesterday and perhaps today (though updates on the institutional side aren’t available yet). 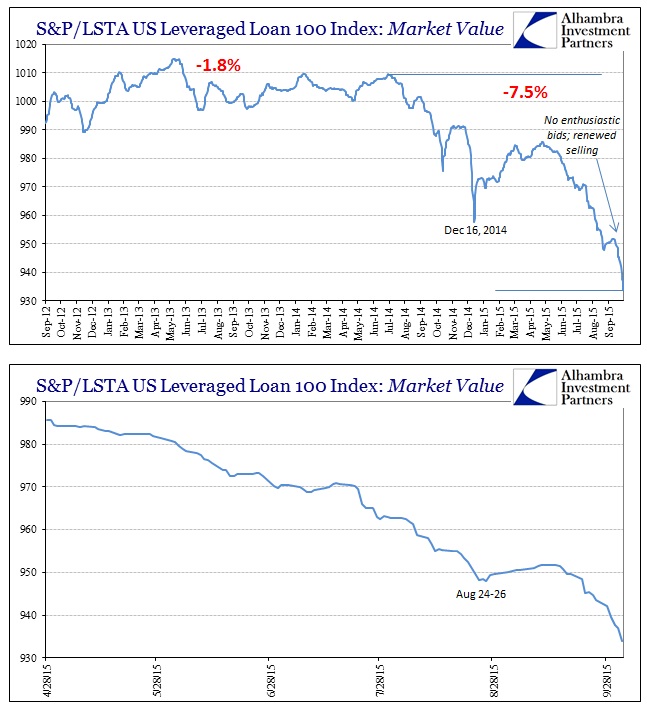 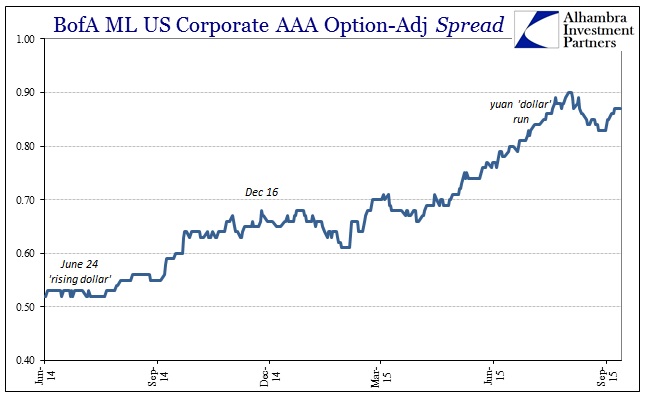 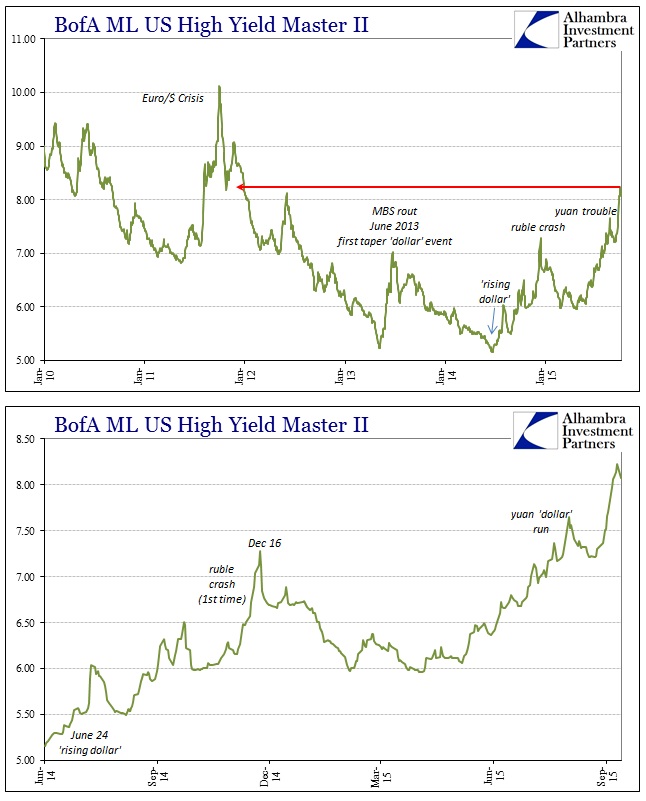 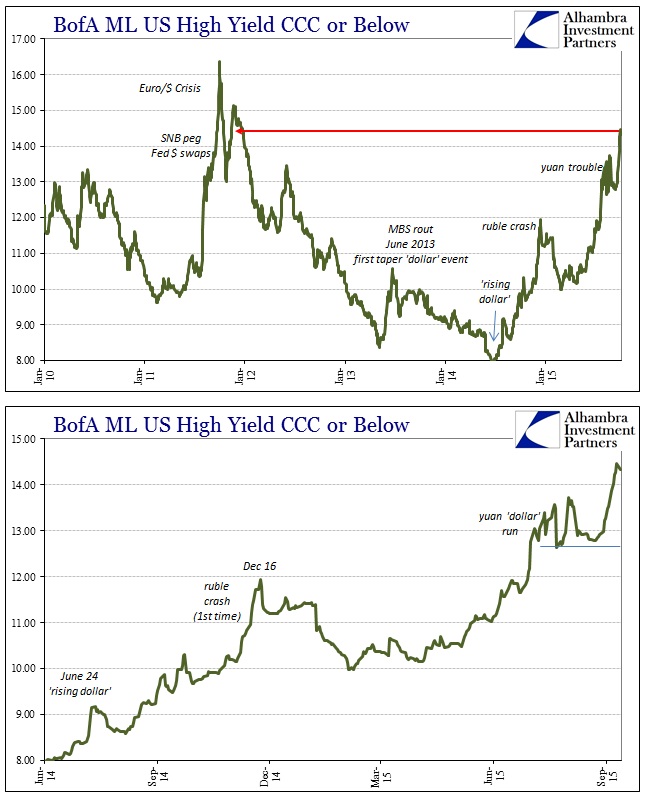 It’s almost as if something is missing here, some of the usual pressing or advancing financial strain that we have seen and been accustomed to since the September FOMC (further going back to July 6). Even offshore renminbi liquidity has been much, much better of late. While that may, too, indicate less darkened intentions in the global “dollar” network, it might also be China on extended holiday. The second of the annual Golden Weeks is under way, started (surprise) October 1 and lasting until tomorrow. Given the stratification of the Asian “dollar”, the calmer conditions of the past few days might instead warrant appreciation for China’s absence. 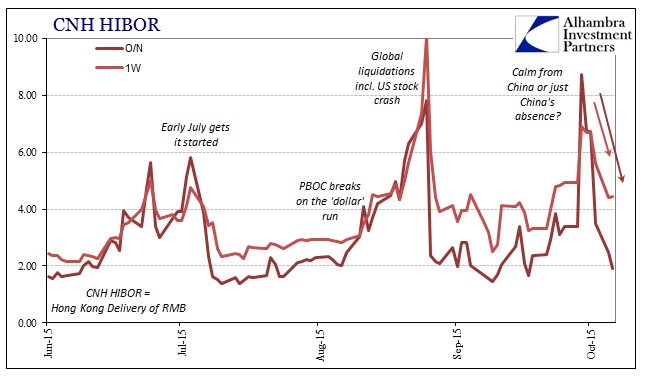 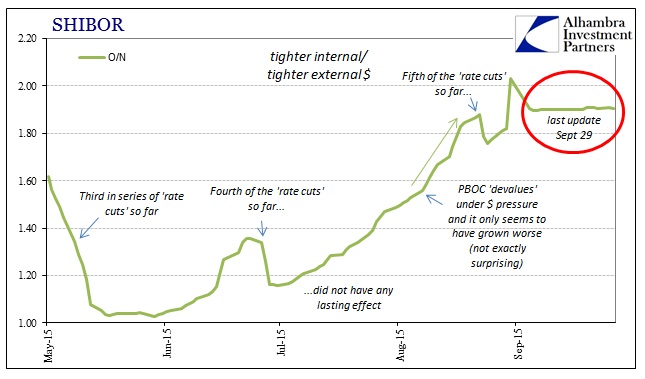 If that is the case, and the disappearance of China-bred pressure on the “dollar” is related to that, then that strengthens the theory that the Asian “dollar” may truly be formed of a separate, but still linked to broader eurodollars, structure. It will be interesting to see what happens in global “dollar” markets, in whole or of parts, when the Chinese get back to work after the week-long holiday. Maybe it will turn out just coincidence that this latest local rally started the day China took a break; or, maybe, as gold and eurodollars, there is some lingering concerns about when it ends. 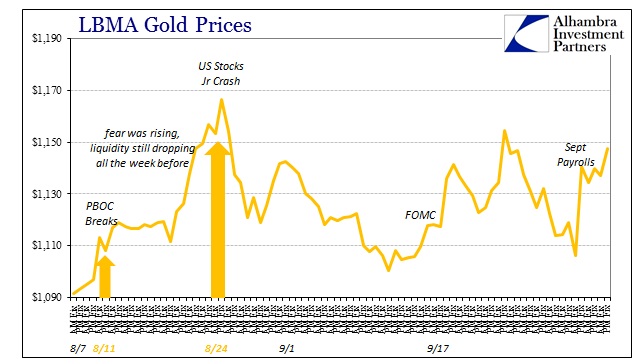