You wouldn’t know it from stock trading or commodities, but when China reopened after its latest Golden Week holiday there was an obvious effect. Stocks have continued to surge while commodities overall have had a good week (copper up another $0.07 today, with WTI at about $50). Inside the money markets, however, China’s open was met with far less enthusiasm, though it varies by exact market.

In eurodollar futures, to begin with, there has been a recurrence of listlessness rather enthusiasm in almost exact replication of the days immediately following the August 24 liquidation event. In some ways, the blowup last Friday over the payrolls looked suspiciously like a replay, so the repeat thereafter would seem to suggest just such protracted misgiving about “dollar” liquidity even if indirect by inferential extension. 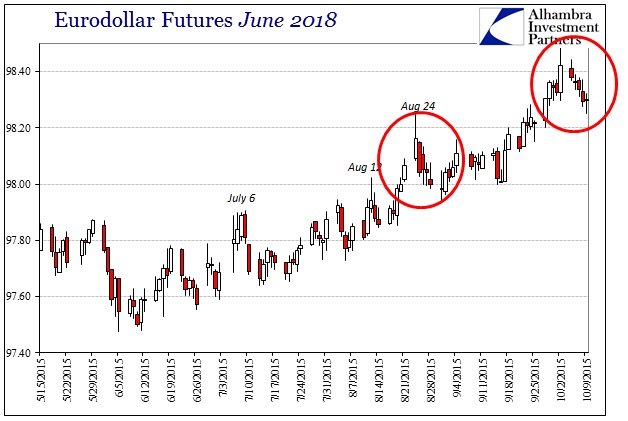 Instead, contra some risk assets, the eurodollar market seems to be still well-defined by this upward movement that began back in early July. 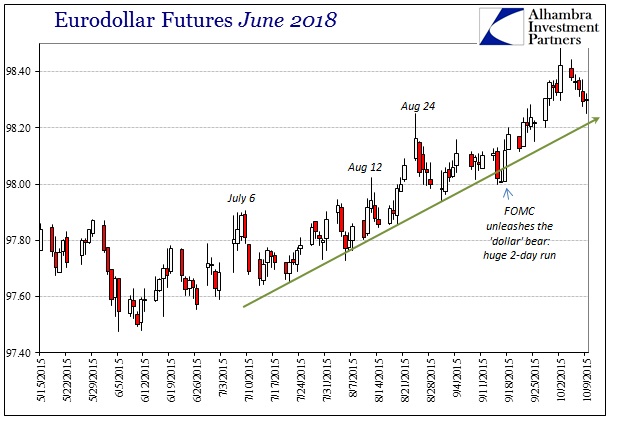 But where eurodollar futures have maybe paused off that bearishness if for a few days, the related swaps market has instead pressed forward (bad sign). Swap spreads, an indication of balance sheet capacity on offer in broader dark leverage, have decompressed (bearish) further, even alarmingly so in the past few days. We can surmise some China effect in that, either through perceptions or actual trading, but at the very least it is clear there has been nothing of an alteration in expectations or condition. Illiquidity and concerns about furthering that regard are simply dominating. 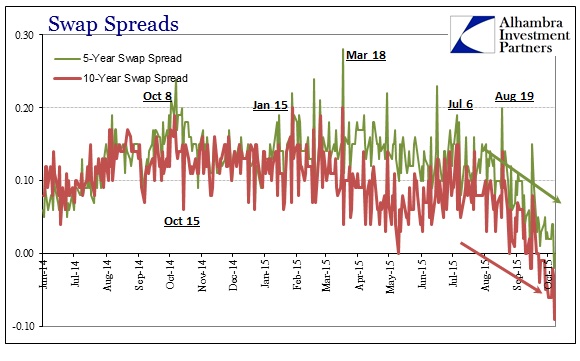 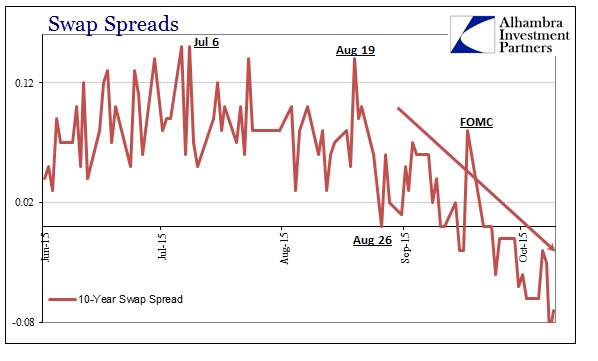 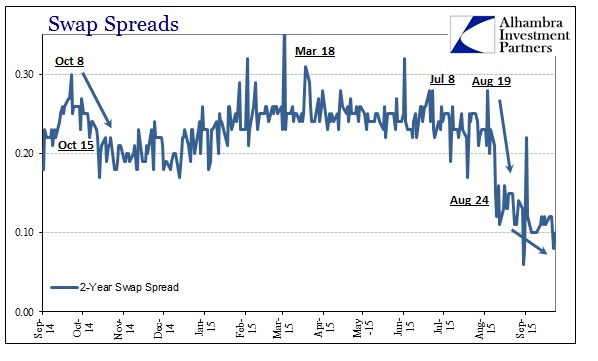 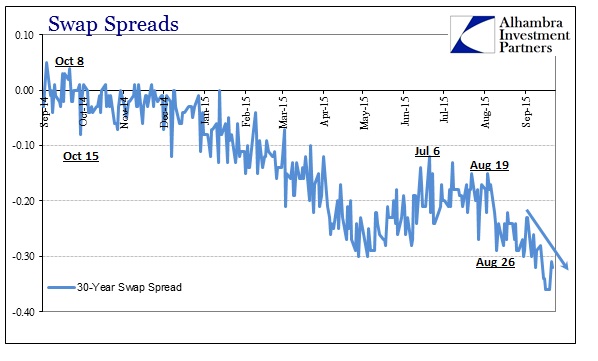 I can’t help but think not only China but also Deutsche Bank and now Credit Suisse; both recently hobbled by their own wrong directions in stubbornly seeking to expand in the guts of the eurodollar trade (all the FICC angles) where everyone else was packing it in, thus undoubtedly and very recently amplifying their intentions to get the hell out of Dodge as fast as they can before all those self-reinforcing “dollar” dynamics bring further balance sheet conflagration.

That view extends to the Asian “dollar” whereby there were no surprises in O/N SHIBOR which remains conspicuously pegged (and thus openly proclaiming the PBOC’s presence, further insinuating something quite amiss given the apparent PBOC need to enforce such a peg). Offshore, however, China’s Golden Week afforded but the smallest of reprieve as overnight CNH HIBOR (Hong Kong/offshore delivery of renminbi) which had calmed to as low as 1.6855% two days ago (along with 1-week CNH HIBOR) . As China reopened, the last indication stands at a jarring 5.946%. 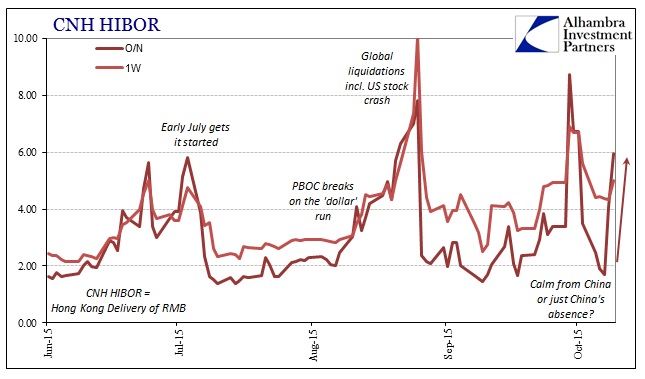 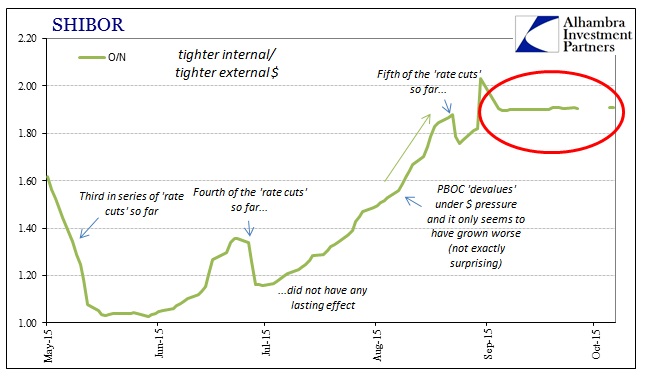 I think all that, and not equity-driven euphoria, adds up to gold trading above $1,150 once again. Despite the outward appearance of renewed vigor, internally there is much to be concerned about over and above what has been already thus far concerning. While stocks apparently celebrate “lower for longer” one more time, the internal “dollar” mechanics continue to burn. 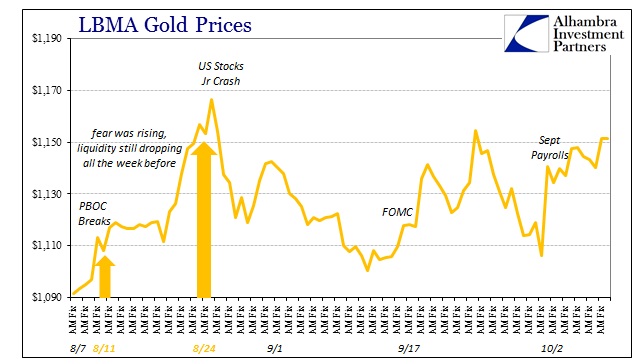 We can see exactly that divergence in the junk bubble which refuses to be bid even where direct selling backs off. Leveraged loan prices (as far as the mainline proxy, best case of the S&P/LSTA Leveraged Loan 100) isn’t much changed from its payroll Friday lows – far, far more “dollar” than an enthusiastic survey of the FOMC receding to further irrelevance. In fact, that seems to be the primary distinction between the outside optimism displayed by stocks and these wicked internal “dollar” conditions, as the growing pessimism and further illiquidity seems surely linked to the same FOMC irrelevance that equities and commodities are (for now) somehow taking positively. 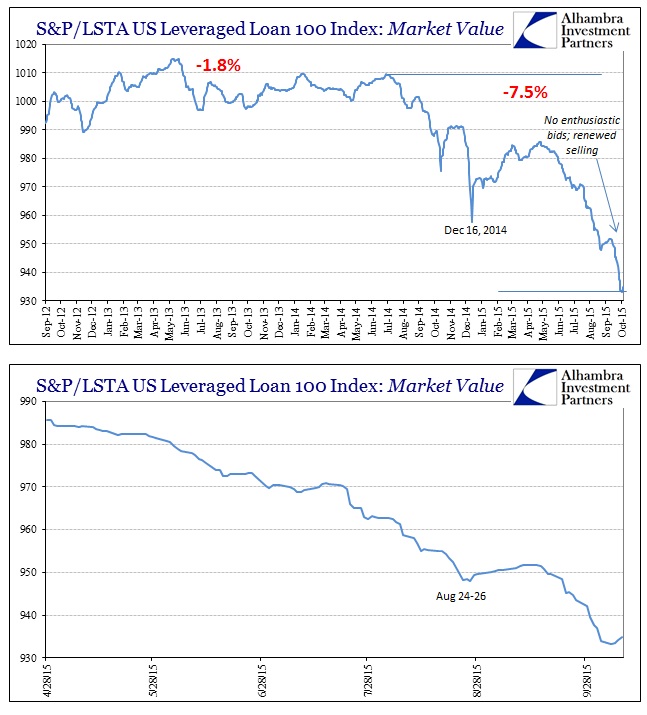 I don’t think this divergence lasts long, but really it is impossible to predict. For my own analysis, the swap spreads carry, by far, the most weight given a more direct angle upon the real “dollar” mechanisms in the internal dark leverage conveyances. I am, again, a little surprised at their depth in this move contrasting even somewhat with eurodollar futures, but such can be the easy case given their slight differences in intents and relations to separate “dollar” factors. Overall, the combination of dynamics here suggest the “dollar” remains wholly undeterred (even after the events of August) and continuing on that negative path established back in July.