Most people would look at a 40-month deviation as being rationally altering, maybe even something so permanent. The Fed, on the other hand, along with economists, have convinced themselves that somehow three and a half years is but a temporary detour. And so monetary policy and the recovery outlook itself are supposed to somehow straddle that inconvenience while still emitting the smallest plausible specks of credibility for “markets.”

We start with several suppositions that in an academic setting are perfectly reasonable and complimentary: the Fed can “print money”; money printing amounts to “more money chasing fewer goods”; “more money chasing fewer goods” means rising prices; rising prices mean workers ask for wage increases; wage increases are inflation; inflation is a recovery and fully functioning economic growth period. Not only is the 2% inflation target indicative of that on the upside, it is also suggesting that the Fed can, by turning off or fine-tuning the “money printing”, stop inflation at or around their 2% threshold should it have been all so workable.

But none of that actually takes place, especially the money printing part. In fact, all of that is a fairy tale that the “market” simply believes can be the case if the Fed is ever so challenged. As long as the Fed holds out such credulity that if it was forced to do so it could, the “market” should do the Fed’s work in a manner consistent with the 2% inflation target. It really does hinge upon that and nothing else.

That is why Janet Yellen is so absolutely sure (well, she says it but her renditions have become much less harmonic over time) that long run inflation expectations are anchored at 2%. When she makes that claim what she is saying is that she still thinks the market believes the Fed holds the “money printing” power unchecked by resolve. Like the illusory great Wizard of Oz, she could display the outlines of such fury but only if she really, really has to.

That is, essentially, where we are at in October 2015. The FOMC still thinks that the market still thinks that inflation is but a threatened reaction away. The market has begun to rethink the entirety of the process. After all, it started with quantitative easing itself, especially how the actual program is faithful to neither of those words. By simple count of colloquial convention, the Fed was forced, by the panic in 2008-09 and its related Great Recession, to, for once, actually prove its monetary mettle; and the Fed rose to that occasion with great “money printing” at least of bank “reserves.”

Their SOMA balances exploded over four years by $4 trillion and for all that massive display the Fed points to…term premiums? That’s pretty much all they have to show for their assumed authority and ferocity of that “printing press”, as some academic conception about the decomposition of long term interest rates being affected by both asset purchases and perceptions about asset purchases now and in the future (orthodoxy!). Worse, the studies they have conducted aren’t even so sure there was all that much effect on even term premiums in longer-term UST rates (which is already a few steps shy of actual economic inflation). And then, since mid-2013, all this QE might/maybe on term premiums was essentially blown apart by the fact that term premiums have fallen farther and faster without QE (including tapering) than with it.

As Ben Bernanke himself described earlier this year:

The 10-year yield, in green, rose sharply during the taper tantrum of 2013, then fell through 2014. The dark blue line shows the estimated term premium. The difference between the yield and the term premium is the risk-neutral yield, plotted in light blue in Figure 4. The risk-neutral yield, an estimate of what the 10-year Treasury yield would be if investors were indifferent to risk, actually rose through 2014, implying that the recent decline in yields is entirely due to a falling term premium.

That naturally raises the question of why the term premium has recently fallen by so much. The answer is not obvious. Fed policy doesn’t seem to explain the decline, as purchases of Treasuries under the quantitative easing program wound down last year.

The answer is, in fact, obvious; just not to anyone who thinks QE is something remotely like money printing. In short, Bernanke has absolutely no idea why term premiums would fall further outside of QE than inside because the Fed was challenged and it responded with enthusiasm and all its legendary survey and potency. The recent bond market behavior, alone, instead might strongly suggest (really, it is dispositive) that QE didn’t even have an effect on long-term interest rates outside of temporary and fatally discrete periods (where the word “transitory” would actually fit and apply). In view of such an “unexpected” turn, markets have started to rethink the whole “money printing” power more comprehensively; beginning with what QE actually is and how bank “reserves” aren’t money, aren’t printing but are just some concentrated, generic and largely inert bank liability totally conditioned by the actions of primary dealers and their dealer activities. Thus, by trying to turn threats of monetary power into demonstrations of monetary power, the FOMC and its QE’s instead pointed those paying attention in the direction of the actual “printing press” – bank balance sheet factors.

In that primary sense, the events of the past few years start to make sense. From the moment QE2 ended, inflation measures (including market-based indications of expectations) have largely been falling in irregular fashion; the balance of the Fed’s balance sheet and its asset holdings have still risen sharply but the real economy and money dealing have moved decidedly the other way. Not even QE3 and QE4 made much matter despite being larger than the prior versions. The decline in especially inflation expectations (TIPS and breakevens, forward rates, etc.) suggested markets were becoming aware of this inflation Easter Bunny, but the Fed and its economists somehow continue to proclaim lorded authority through the same threat of “money printing” as if they hadn’t just done it.

Blindly repeating the words were as actual authority, Janet Yellen in her big speech re-emphasized the long run inflation anchor just a few days after the FOMC failed to act yet again because of inflation concerns:

Federal Reserve officials held off on raising short-term interest rates at their September policy meeting because of worries that inflation could remain stuck at exceptionally low levels, according to minutes released Thursday.

It was actually worse than the Wall Street Journal describes, as the FOMC minutes actually show, pace Bernanke and term premiums, the committee seems to have great difficulty understanding markets at all.

Measures of inflation compensation based on Treasury Inflation-Protected Securities fell to near their historical lows.

Broad U.S. equity price indexes were highly correlated with foreign equity indexes over the intermeeting period and posted net declines. Although concerns about global economic growth likely contributed to the declines in domestic equity prices, investors may also have reassessed valuations and risk in equity markets. Domestic equity indexes were quite volatile in late August and early September, and one-month-ahead option implied volatility on the S&P 500 index reached levels last seen in 2011.

None of those prices or factors are consistent with a well-run economy (assuming that should even be a desirable attempt) acting well-behaved undeterred toward the projected path of basic acceptability. Thus, the delay about September is the Fed trying to reconcile itself with itself; inflation is both well-anchored and at the same time concerning toward “stuck at exceptionally low levels?” It can’t be both, but to accept the latter means accepting that the market no longer buys into the “money printing” fairy tale that has ruled orthodox understanding since Alan Greenspan departed into interest rate targeting (because, ironically, the Fed realized that “money” behavior was “unexpectedly” changing).

That is why the FOMC repeatedly stresses professional forecasts in ignoring those market-based indications; and why “transitory” becomes a permanent addition to all these “unexpected” and continuing deviances.

The Fed hasn’t been in the “money printing” business in decades, and simply hopes that nobody notices. Part of that, a great deal of our current problems, rest upon the fact that it didn’t notice either. Not only is Janet Yellen and the FOMC expecting to further fool the markets, they are still fooling themselves. One is finally realizing it; the other likely never will. 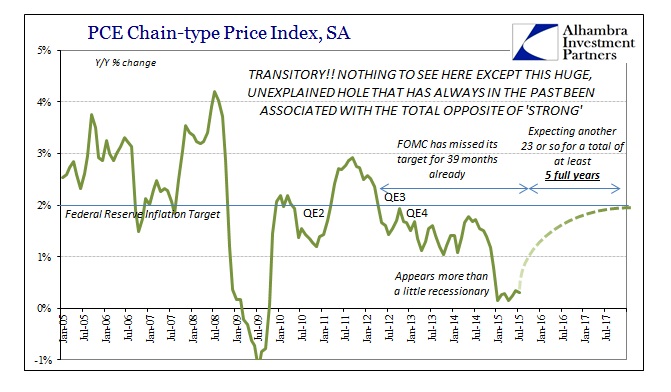