Unsure what to make of the renewed disaster in Chinese trade figures, there has been renewed emphasis on China being China. Almost every media story about the 20% collapse in imports references an assumed attempt by China to transform out of exports and into a consumer-driven economy without reconciling how or why that has so obviously and spectacularly failed. Nor is there any mention as to why China might plot such a course in the first place, particularly since all expectations in 2009 were for an honest and symmetrical recovery – meaning China would resume its export position when the global economy shrugged off the Panic of 2008.

Much of China’s slowdown over the past five years was self-imposed as the ruling Communist Party tries to steer the economy to more self-sustaining growth based on domestic consumption instead of exports and investment. But the past year’s unexpectedly deep decline has raised fears of politically dangerous job losses.

China has been attempting to shift from an export-led economy to a consumer-led one, although the steep fall in imports suggests domestic demand is not as strong as the government would have hoped.

These are hedged and qualified statements where only resolute conclusions can be drawn. If China did indeed attempt such a transformation it is not “not as strong” but rather in total and absolute disarray. There is an oft-hidden suite of assumptions in the financial media (owing from economists) that suggests a correlation between the amount of control and the ability to drive the results. I think that is why China and the PBOC are given an unnatural deference, whereby the communist central bank is almost the perfect ideal of what orthodox economists wish to propose with their efforts – unparalleled power to simply implement their genius designs without (usually) all the mess of differing opinions and deeper understanding (which is what markets are).

It also converges with this year’s steady bout of confusion, “the past year’s unexpectedly deep decline” as if the “dollar” hadn’t warned of it in the first place. Nothing is working as was so assured late last year and early this year, so economists (Yellen and the FOMC in particular) are seeing shadows and working up over phantoms (transitory). All necessary perspective has been shed in favor of splitting the tiniest of hairs:

The moderation in the contraction of exports is likely due to mild improvement in external demand, [China economist at Nomura Yang] Zhao said. “Moreover, the better export data could be partially explained by a rather large appreciation of EUR against CNY in September from August, compared to a sharp depreciation of EUR against CNY in August-September 2014,” he noted.

“Mild improvement in external demand”? China’s exports fell 3.7% year-over-year in September (in US$ terms) after declining 5.5% in August. That isn’t much improvement even in absolute terms let alone anything that would suggest conditions in the global economy are turning around. From Q3 2002 through Q3 2008, quarterly export growth was never less than +20%. For China, anything less than that is a disaster, especially at this late stage of the “recovery”, and at this point the country might need to see +40% or +50% to avoid broad oversupply liquidations.

From September 2012 through September 2015, China’s exports grew by 10%; total, not per year. From September 2005 through September 2008, China’s exports grew 94%; that is the baseline upon which all of China, Inc. is based. All the internal “stimulus” and monetarism was never aimed at changing that, instead it was designed to be a bridge between the collapse in 2009 and, again, the full and steady recovery that every economist and central banker around the world assured the world was coming. That is why fixed asset investment maintained its steady course until the 2012 slowdown, as industrial capacity never shifted to an internal consumption mix but rather was essentially pegged in place awaiting the US, Europe and everywhere else resuming its pre-2008 condition. 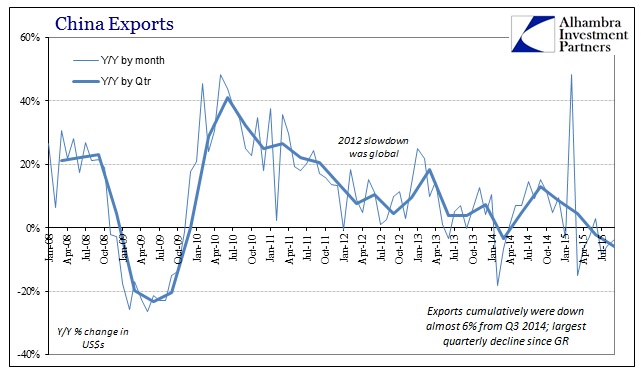 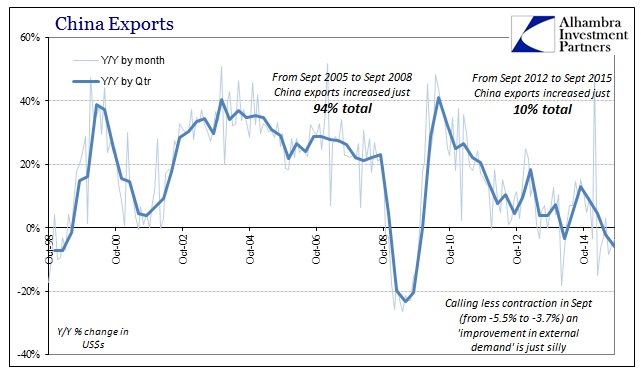 The collapse in imports is directly related to the failure of exports (thus, global economy) to revisit the prior baseline. After the 2012 global slowdown, China’s monetary “powers” correctly identified that as being a permanent fixture upon future economic conditions. In response, under “reform”, the PBOC identified the enormous asset bubbles as the primary danger, shifting from growth-at-all-costs. Thus, the decline in imports is the reduction in “stimulus” after that reform shift, as China is no longer making every effort to hold in place oversupply and financialism. 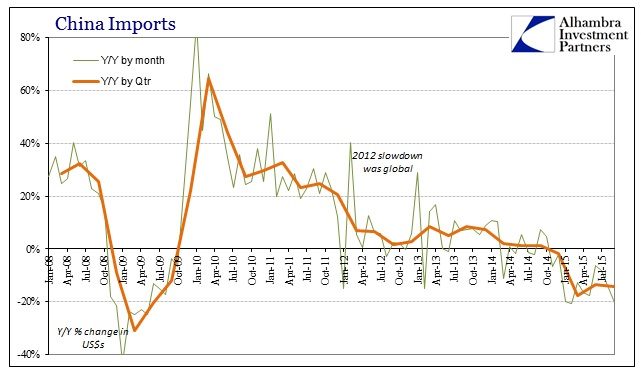 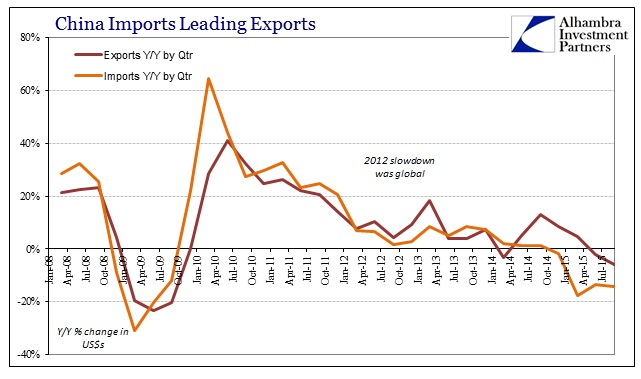 Away from these specifics (and usually of any domestic data, too), these conditions are starting to seep into even the most robust of mainstream consciousness:

Wall Street is getting increasingly nervous about the prospects for recession, both on a global and domestic level.

Slowing global growth has been one of the predominant investing themes in 2015, causing enough turmoil to send both the S&P 500 and the MSCI World Index down about 4 percent. [emphasis added]

When even the formerly permanent bulls are rethinking risk, you have to understand how this constant rolling thunder of negative data across the whole world, US included as linked to China’s problems, is pushing toward that ultimate breaking point.

Liz Ann Sonders, the often-bullish chief investment strategist at Charles Schwab, generated some talk on Wall Street this week when she announced that the firm, which manages $2.46 trillion for clients, has turned neutral on stocks.

Her worries are twofold, and both involve recessions: One, the much-discussed potential for an earnings recession, the other a “relatively low” chance for an outright economic recession that she nonetheless believes should be considered.

Again, it’s not so much the fact that she forecasts recession as a “relatively low” probability, it is how much her view has changed from less than a year ago:

There are a couple of interesting places. We like China. They have a reform agenda and are looking to reform their economy to be more domestic-consumption oriented. They are also trying to gently prick the credit bubble without causing too many problems.

That thesis has totally fallen apart this year in really spectacular fashion, and like it or not that includes the US’ lack of “demand” because it was those robust perceptions of US demand that was supporting why everyone liked China in the first place. In other words, if China is so close to circling the drain that is not just of China’s making but the disintegration of “transitory.” That view is far more in alignment with what the FOMC has not done than what the FOMC declares about the US economy and its “overseas” risks.

The progression is clear, which is all that matters. Economists will always look to extrapolate the smallest second derivative as if it were definitive proof to the recovery, but markets are being forced everywhere to come to terms with not just negativity but a growing and denser sense of what might be a worst case.