Given the rising concerns about the state of the US economy, and not just “overseas” problems, most commentary about it believes that a reduced chance in Federal Reserve action is driving most of asset prices and markets. Data today in the PPI (US & China, closely linked) and US retail sales were described to that effect. That contributed to the interpretation of a “weaker dollar” bred by that “lower for longer” in FOMC inaction about ZIRP.

The dollar fell to fresh 3-1/2 week lows versus a group of currencies on Wednesday as weaker-than-expected on domestic retail sales and producer prices further reduced expectations the Federal Reserve would raise interest rates later this year.

Despite the great danger in viewing the US central bank as the global center of the whole economy, it is instead the economic view that in funding markets drove quite the opposite conclusion. From my take of wholesale “dollars” the same angry dollar that ignited the run on China in August leading to global liquidation only a few weeks later was spotted. Maybe that calls for a new catalog of qualifiers and adjectives, but “weaker dollar” does not apply here; if anything, tighter “dollar” works much better even though that makes for a diametrically opposed implication.

In other words, if the Fed’s influence works how it is thought to, then remaining at ZIRP is supposed to “loosen” not tighten dollar conditions (even in generic terms). Given that the following very stark funding proxies strenuously disagree with that characterization (and thus the whole string of assumed processes that are either misconceived or simply theoretical ghosts really don’t apply) it isn’t anything about the Fed but rather this sinking examination of global prospects with the US moving closer to the endangered center (the combined death of both “decouple” and “transitory”). The Asian “dollar” has surely been tied to the reversal, as once China reopened from its Golden Week “suddenly” everything from crude oil to eurodollar futures (and even stocks) have struggled again.

If “lower for longer” truly means “looser” monetary policy by relative expectation, then there should be account for all this conspicuous “safe haven” jumping: 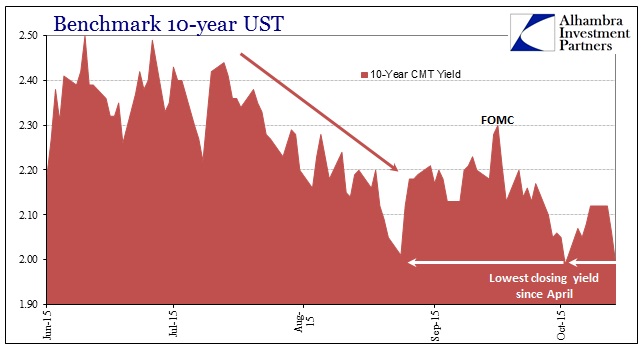 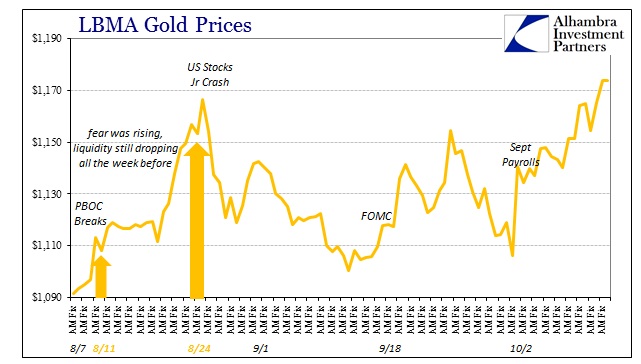 That extends into funding currencies, which in my view are far more relevant and relative to the true “dollar” than ETF’s or dollar indices that are often retail constructions rather than informative prices. In other words, again, the “dollar” was hugely disruptive today, starting with eurodollar futures that jumped right at the open and never looked back. While the intraday high for the June 2018 futures price was slightly below the record set on October 2 (payroll Friday), the closing price today far exceeded that one. 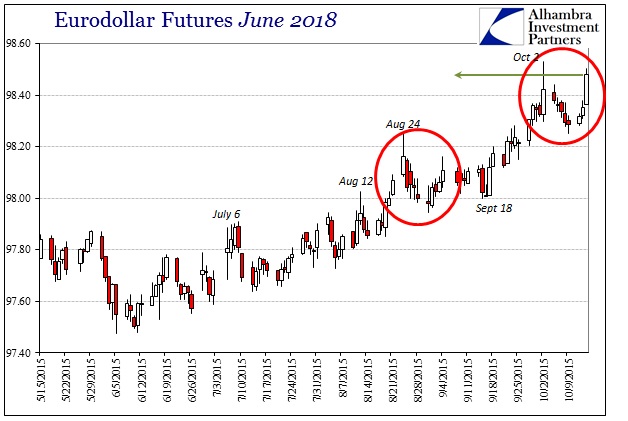 The reversal in the franc and the yen finishes off the review of what can only be stated as a highly uncertain and fragile funding environment. There is no Fed/ZIRP assurance trading here, and given how broader asset markets have responded (as you would expect when funding leads) the eurodollar decay must have certainly taken today’s economic data as another amplification toward destabilization. 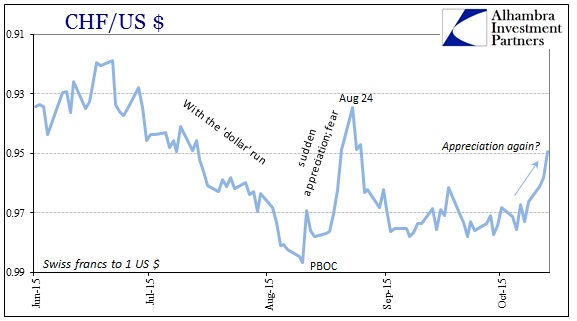 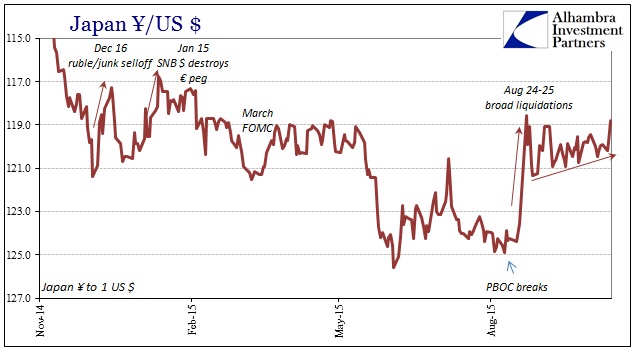 With the franc accelerating above 95 and the yen breaking 119 (contributing to that picture of a “weaker dollar”), combined with gold and UST yields, the implications seem quite clear. It is understandable why there might be such a separation of commentary from these kinds of results, both in terms of hoped sentiment (denial, really) and a tendency toward shallow, surface consideration. Some of this isn’t surprising given that tomorrow is another October 15, but in any case, as I wondered yesterday, there appears to have been even further downside acceleration again today. China or not, Asian “dollar” or eurodollar, the common strand is almost assuredly common economy now not central bank.

In that case, “weak” does apply to the “dollar” if only in its traditional setting; using instead the common definition of the word, stripped of its conventional financial connotations, meaning “liable to give way or break under pressure.”