In a world wrapped in an often impenetrable morass of complexity and numbing esoteric deceitfulness, sometimes it is worthwhile to marvel in fleeting passes of simplicity. We have been looking for an isolated glimpse or almost control group synthesis of the Asian “dollar.” I suggested a few weeks back that China’s weeklong national holiday might provide such an opportunity, with the Chinese pressures drummed into silence and then unleashed again; to see it without and then with in short order.

In some parts of the eurodollar system it never was, as pointed out yesterday the raw eurodollar prices and configurations seemed unaffected at both ends. You can make a passing resemblance of stock prices in the US and in some parts of the world, but it seems as if commodities and really crude oil have circled at least some agent of Asian “dollar” addition (through subtraction). 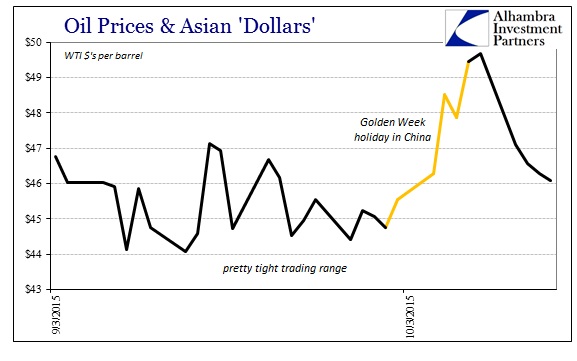 Obviously, there are other factors to consider, but for a brief moment we appreciate at least the potential for unassuming revelation. In my analysis this isn’t a random occurrence and more so I don’t think it is being taken as such. Also noted yesterday, I think the continued “safe haven” bids especially in gold might be, in some part, recognition of how the eurodollar system is itself under duress while at the same time China and any Asian “dollar” might only add to it (or, at worst, trade places, back and forth, as the primary engine of disruption, combining into a roiling stew of continuous backwardness). 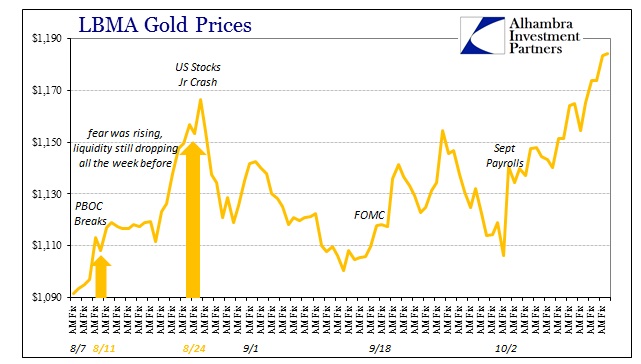 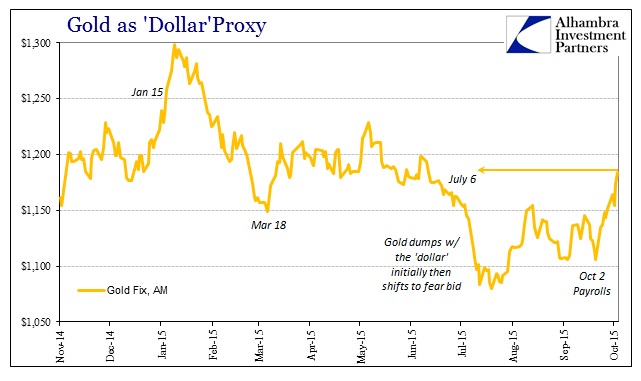 I find, therefore, significance in gold retracing now all of its “dollar” dump from July. The Asian “dollar” may end up being an imperfect signal of the true end of “transitory.”