In Hamlet, Act 1, Scene III, Shakespeare warns, in his own poetic fashion and style, about what should happen when always or nearly so looking for only the easy way forward:

I shall the effect of this good lesson keep,
As watchman to my heart. But, good my brother,
Do not, as some ungracious pastors do,
Show me the steep and thorny way to heaven;
Whiles, like a puff’d and reckless libertine,
Himself the primrose path of dalliance treads,
And recks not his own rede.

That might be the ripest summation of orthodox economics in this “recovery” age. While the admonishment applies to both general and specific regimens here and there, it is perhaps none more so than China. I am not, in this instance, referring to the PBOC and its reform agenda, quite the contrary. From my view, the PBOC learned that following the monetary “primrose path” led to as Shakespeare suggested after taking the attractive path of monetary “sin” and finding only economic and asset bubble “hell.”

Instead, it is economists that continue to define that attribution. Whenever China’s data gets to taking a slightly positive variation, it is “proof” of the great work of “stimulus”, yet when inevitably that interpretation actually proves premature it is thus unflinching in its demand for only more. Monetary “stimulus” is that trail and it is still leading the world into the great and dire straits of perpetual depression. You can track the entire Chinese trajectory downward from the 2012 slowdown in exactly this manner, where in our twisted technocratic age the primrose path of 17th century metaphor is in the modern reality of Chinese industrial production and fixed asset investment.

Just one quarter ago, the positive variation in economic statistics was again the great proof the bottom was in:

The result buoys prospects for Premier Li Keqiang’s 2015 growth target of about 7 percent and the outlook for the world economy, with China stabilizing and the U.S. forecast to accelerate. Much like last year, a sluggish start spurred more stimulus as the government orchestrated a debt swap for provinces and the central bank accelerated monetary easing.

“Downside risks are getting smaller,” said Ding Shuang, chief China economist at Standard Chartered Plc in Hong Kong. “A modest recovery is expected in the second half.”

“The first impression from the latest data is one of stability, with signs of restored momentum heading into the second half,” Bloomberg’s Chief Asia Economist Tom Orlik wrote in a note. “However, to the extent that growth was supported by financial sector gains from the stock market, it won’t be sustained without further stimulus.”

All of that proved as illusory as these same predictions have done time and again. Instead, following as always the “dollar’s” disruptive production, China’s economic stats took another hard turn in Q3. While GDP was “allowed” to fall below 7% in Q3, hitting 6.9% and heating up the deflator suspicion, the rest of the primary figures took quite a negative “dollar” detour. Industrial production fell back to just 5.7%, barely above March’s multi-year low at 5.6%. Perhaps more importantly, fixed asset investment dropped sharply to 10.3% (from 10.9% in August) and a new low growth rate not seen since December 2000 (9.7%). 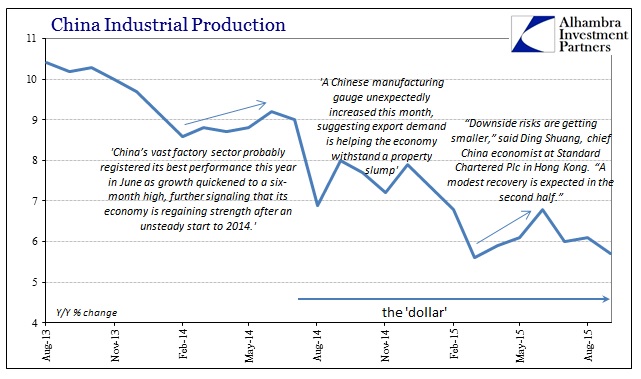 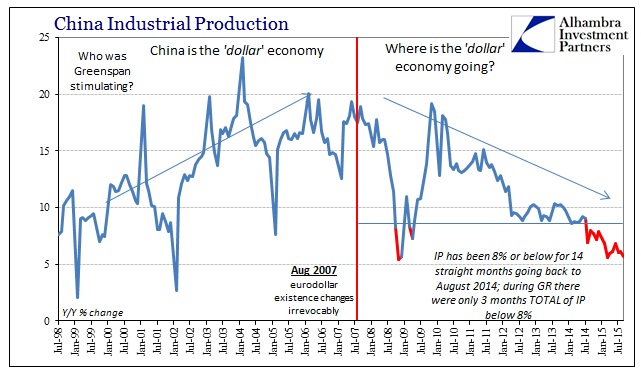 That deficiency bookend from FAI defines the larger context that lies in the opposite direction of “stimulus.” From 2003 through 2011 (including the whole Great Recession, which outlines the effects of the fiscal “stimulus” side) fixed asset investment averaged nearly 30% year-over-year growth, never falling below 23% in any month. So even at +10% it is an advance only a third as necessary for re-establishing the baseline in capacity in absolute numbers, but quite further behind when factoring time and compounding as this downturn gets still worse into now its fifth year. 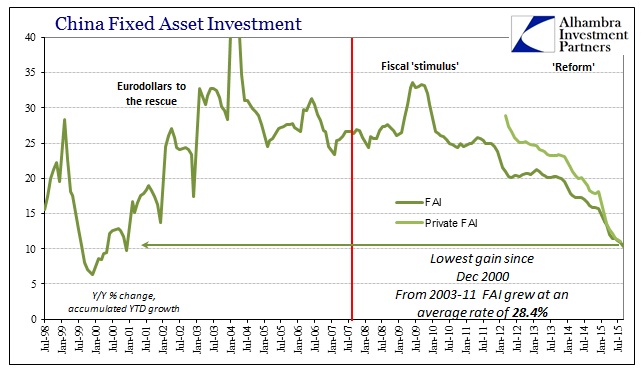 It bears repeating (incessantly) that China’s problems are our problems; determined both by US domestic demand, or the distinct lack of it, and “our” modern wholesale “dollar.” There is no stimulus in either of those, certainly none to be gained from acceleration in eurodollar decay, which is the default position determining the Chinese economy as the central pivot for the global economy. Reform, as is currently constituted, has shifted the balance of monetarism against economic concerns because of especially the time component of the slowdown – the imbalance of asset bubbles against that prior capacity and production reference point.

In very simple terms, the PBOC has finally moved away from the primrose path and is paying the price from, in the past, having strayed too far down the “dalliance” of its cartography. The reason for doing so is to establish a more realistic baseline for production and capacity, which is likely impossible given all the monetary injection 2009 through 2012. But as much as that is a warning about China, it is eminently applicable here and everywhere; if China can’t get back to its eurodollar heyday, then that means we have not either, and, worse, cannot.