Earlier this year, not unlike China’s monthly variation, US manufacturing appeared to be shaking off the third straight extra-cold winter. By count of the ISM Manufacturing PMI, the sector was determined (by conventional assessment) to be weak but solid and forward. That rebound contributed to both the dominant recovery idea (anything down is anomaly) as well as Yellen’s “transitory” admonishments. The June 2015 ISM all but “confirmed” as much:

The Institute for Supply Management’s factory index increased to 53.5 in June from 52.8 the prior month, the Tempe, Arizona-based group’s report showed Wednesday. Readings above 50 indicate expansion. The figure was in line with the Bloomberg survey median forecast of 53.2…

“Manufacturing has picked up after a lull — with fits and starts, it’s gradually re-accelerating,” said Robert Stein, deputy chief economist at First Trust Portfolios LP in Wheaton, Illinois, who correctly forecast the index. “It’s not gangbusters, white-hot economic boom by any stretch of the imagination, but we are making progress.”

Of course, as we know too well now, that “pick up” has fizzled and then some. By count of last week’s Federal Reserve regional manufacturing indices (Empire & Philly) there is a very good chance that the ISM Manufacturing PMI will decide to be below 50 in October (we will have to wait until the release on November 2 to find out for sure). In any case, the view from the regional surveys is not just grim but, more importantly, getting more so by the month:

Two regional manufacturing gauges painted an identical picture in October with both showing a sharp slowing in the industrial sector in the Northeast.

The Empire State manufacturing index, which measures conditions in the New York area, stayed in deep negative territory for the third month in a row for the first time since the depths of the Great Recession.

At the other end of the New Jersey Turnpike, the Philadelphia Fed’s manufacturing index remained in negative territory for the second straight month…

Derek Lindsey, economist at BNP Paribas, said the two reports suggest that the ISM will fall below 50 for the first time since November 2012.

If that is true, the economy might well have already entered a sharp slowdown like that in 2012. Even if it took mainline statistics three years to catch on, that was a highly dangerous economic moment; one that I still maintain was nothing less in ferocity than to have enforced a partial cycle inflection upon the whole global economy. Unlike then, however, there appears no QE3 and QE4 imminent as a “rescue” (for all the good they might have done; and even that accounting is dubious and disputed apart from perhaps the curious, record and conspicuously uninterrupted inventory accumulation the past few years). Instead, manufacturing and sales apart from inventory appear more aligned, quite closely, with the “dollar.”

Given that correlation, it isn’t surprising the continual misinterpretations about how serious the US economy’s recent depressive nature has become. This is, again, mostly due to the misunderstanding (and just plain overall ignorance) about what exactly the “dollar” is and means. There may be some mainstream mystery about how manufacturing has so seriously declined again (though still downplaying the significance of it) but there is and will be appreciated and disseminated no association between that and, for example, negative swap spreads.

If there truly is an agent of the wholesale “dollar” it is certainly the dark leverage derivatives which define modern banking’s wholesale functions. Under the cover of FICC generics, the cumulative derivative book by which fixed income trading (stocks get all the attention, but it is “bond” trading that rules and defines global finance) occurs can tell us a great deal about that occurrence. Thus, if swap spreads have suddenly departed from all common sense we can reasonably presume something more awful about global finance.

A negative swap spread, as I have detailed before, assaults conventional financial sense. To most, a negative spread is nonsense and leads to so much consternation about how to interpret the situation when it has arisen. Unfortunately in 2015, especially after July 6, it has been near-universal across far too many maturities. While on the surface it would suggest that the “market” in swap derivatives is pricing more risk of UST’s than swap counterparties, the only real inference about such compression is the nonsense itself. In other words, the nonsense nature of negative swap spreads is precisely the point – for them to be negative in the first place, let alone highly so (like the 30s again), is a pretty unambiguous signal of malfunction if not full distress. It is only great imbalance that can change the information content of a market price into meaninglessness; therefore we can interpret that case as some great reduction in balance sheet capacity since it is dealer capacity that determines the nature of the spreads. 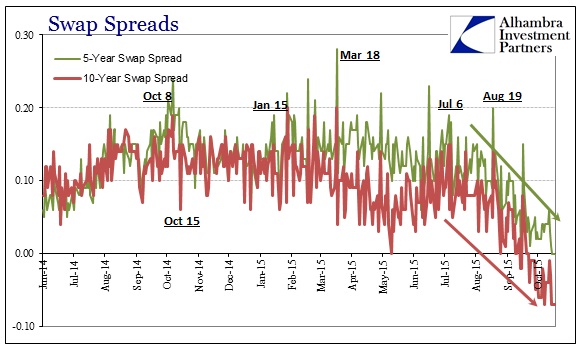 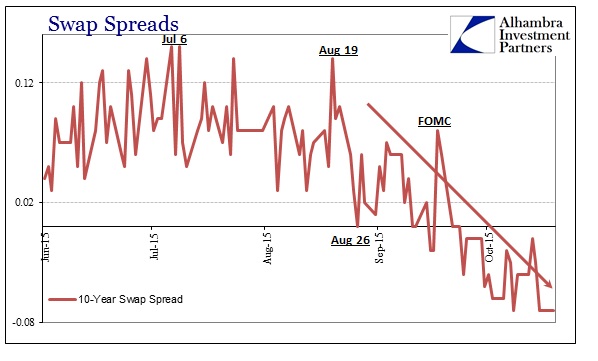 We don’t have to go very far to actually see that reduction in dealer capacity itself; the various eurodollar banks have been openly proclaiming their great and growing disdain for FICC, particularly their derivative books and the leverage they produce without profit anymore. So we have a direct and visible (a rarity) link between a wholesale “dollar” price and the offered capacity that drives it, meaning instead of swap spread nonsense actual and full sense. 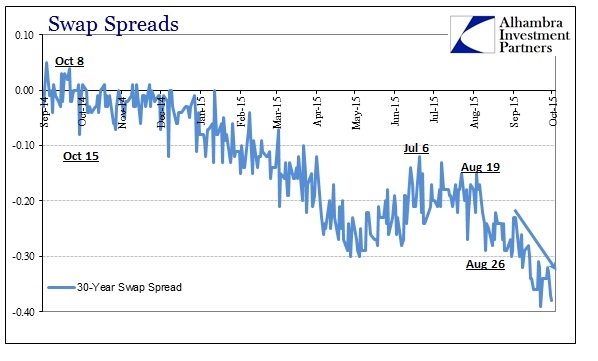 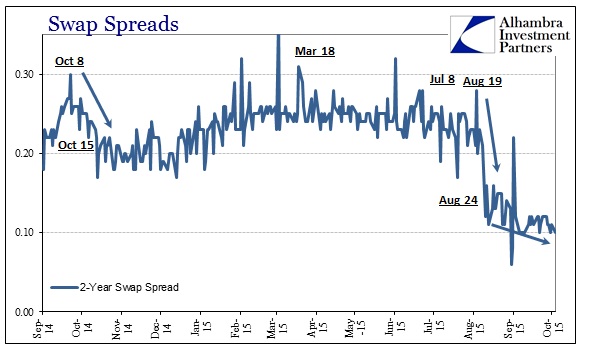 Such negative “dollar” pressure only feeds negatively upon the global economy, both as a matter of actual trade financing (which is one part of eurodollar function, its original function though far surpassed this century in speculative volume) and information feeding further perceptions about it. And it is here that leads to self-feeding and self-reinforcing cyclicality. Consider that negative “dollar” pricing leads to more problematic local bank financing their portion of the “dollar” short, which directly affects trade business. The more caution on the part of global trade businesses feeds to a reduced picture of the global economy and thus greater modeled and expected volatility within dealer capacity calculations that force only further capacity retreat; which heightens global economic concerns and so on.

While that is only one self-reinforcing channel, it doesn’t matter any others (such as domestic “demand” component which takes similar cues, if more slowly by comparison). The “information” thus of nonsense swap spreads is heightened in that respect, which seems to be the perfect opportunity for central bank intervention; to do what central banks always wish and re-engineer systemic prices more to their favor. Of course, central banks would have to actually own up to the wholesale system in order to do so, which they won’t, stuck instead in a 1950’s monetary world, but even if they would it would not matter. The main focal point of dark leverage pressure is that profitability expression driving the dark leverage withdrawal in the first place.

As I have noted before, that seems to have been one effect of QE3 & QE4, as some eurodollar dealers (Deutsche Bank, Credit Suisse, Goldman Sachs, JP Morgan to a smaller extent) sought just that profit opportunity in the world immediately thereafter. But the keyword in that last sentence is “some”; the majority of dealers did not follow the Fed’s preferred course, so their attempt via QE influence was, at best, partial. Worse, those that followed that expected opportunity have been badly burned in doing so.

All of that reduces to the one, immutable facet of the entire “recovery” affair, as it relates “dollar” to economy and back again. Namely, there has been no recovery; try as it might, QE only influenced financial behavior with greatly limited effect. If it had truly worked, then those banks defying the eurodollar withdrawal would have been best positioned to take advantage of what was supposed to follow, and thus confirm via the “dollar.” The opposite has occurred which only endorses the opposite condition.

In that sense, which exudes much more than a dash of finality this time, the “dollar” leaves the realm of esoteric and opaque global financialism and becomes “real.” And it has, as economic views (and statistics) have evolved along that “dollar” trajectory, influenced by almost everything the withdrawing “dollar” touches; from oil prices to junk bond prices to disruptive currency prices. Thus, we might find again the deeply troubling association between nonsense swap spreads and the potential for how far is down in the real economy. 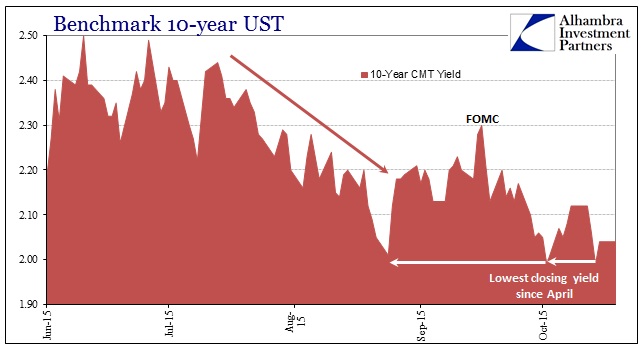 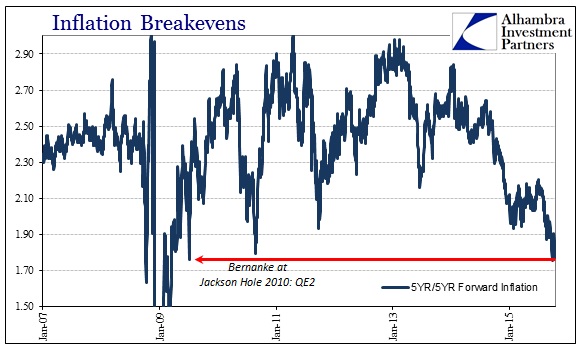 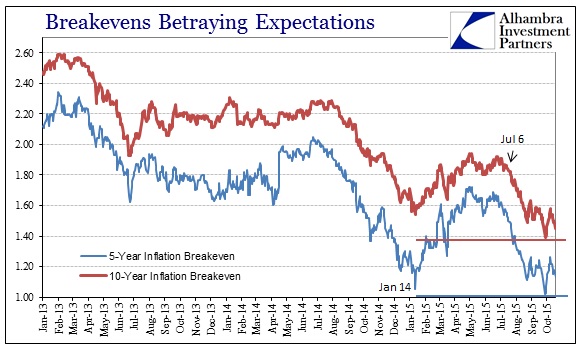