There is much less to an FOMC statement than the FOMC minutes, all far less than the actual meeting transcripts. That is why the statement is available immediately, the minutes within a month , but you will wait more than 5 years for the actual discussion. In the case of this “recovery”, that delay worked to our collective disadvantage, for had the actual discussions in 2007 and 2008 been readily available nobody would have followed the central bank path thereafter. Policymakers effectively disqualified themselves with a startling mix of ignorance and obnoxious arrogance, yet from there to here they have remained safely protected as if experts on something meaningful.

That does not mean, however, there is nothing of significance in even the bland and sanitized policy statement. In the current case, as with the past few, the word “partly” obstructs the pure sentiments that the recovery narrative requires for full dispensation. All the rhetoric of the policy statement remains banally hopeful except that one word so very out of place within that structure.

As well it should be given that the Fed’s mandates are arguably being met on the first and unarguably failing on the second. The FOMC can get away with claiming success on employment as the unemployment rate gives them that projection even if it is quite alone in doing so. On “inflation”, they are sorely out of luck. The most that Janet Yellen can claim is the highly dubious assertion that long run expectations are anchored because of unending circular logic; “professional forecasters” who get their forecasts from principles derived and encoded in central bank philosophy. 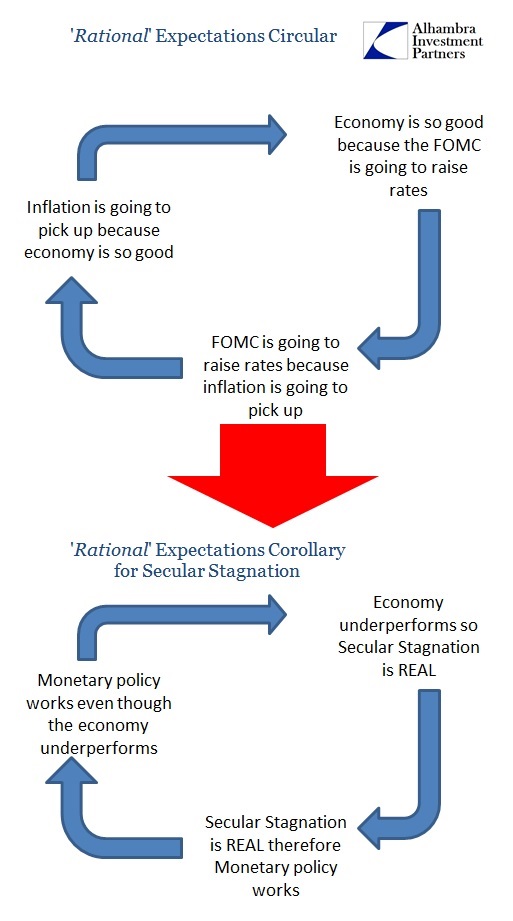 You can see the development of this “mystery” just in the language utilized by each successive policy statement since the “dollar” turned in the middle of last year (unexpectedly, of course).

September 2014
Inflation has been running below the Committee’s longer-run objective.

October 2014
Inflation has continued to run below the Committee’s longer-run objective.

October 2015
Inflation has continued to run below the Committee’s longer-run objective, partly reflecting declines in energy prices and in prices of non-energy imports. [no more “earlier” no more “transitory”?; emphasis added]

Anyone with at least minimal awareness should be asking, “What is the other part?” If missing the committee’s “sacred” objective of 2% on the PCE Deflator can be traced to oil prices and overseas mess but only “partly”, then something quite substantial has been omitted since this excuse is only enlarged at every meeting. By all actual and orthodox means, there is “something” pretty wrong about not just the more than three years below that target but how it has all turned decidedly away just this year. Oil prices get the most attention by purpose; but as the FOMC admits, carefully, there is more to it. 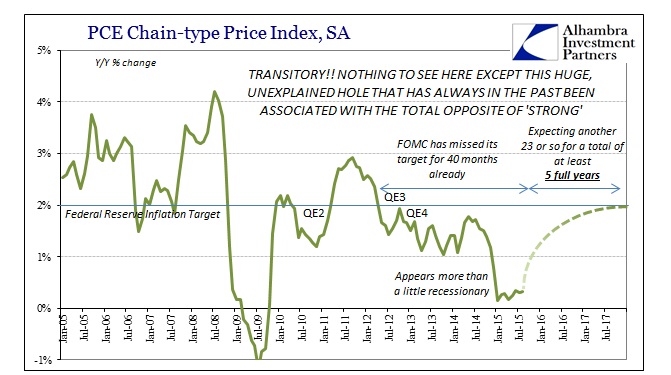 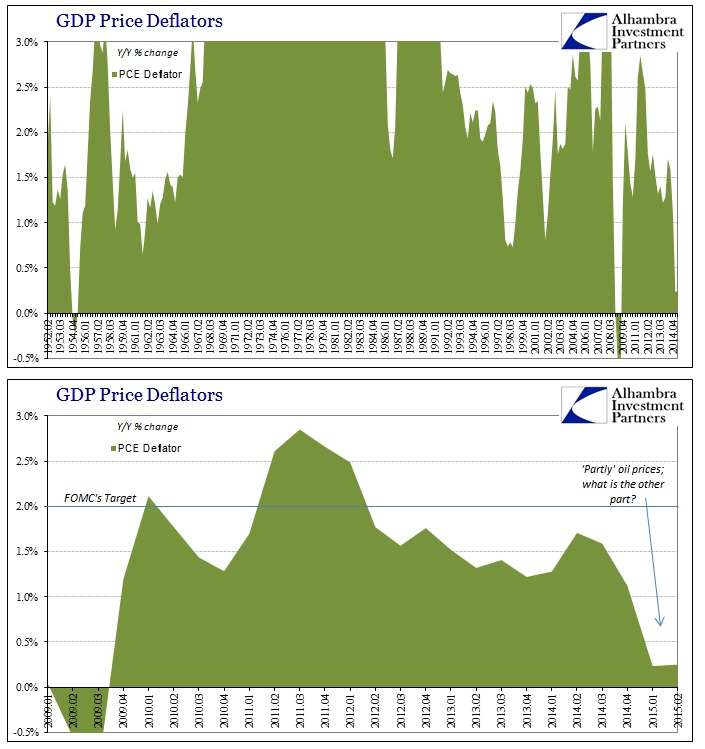 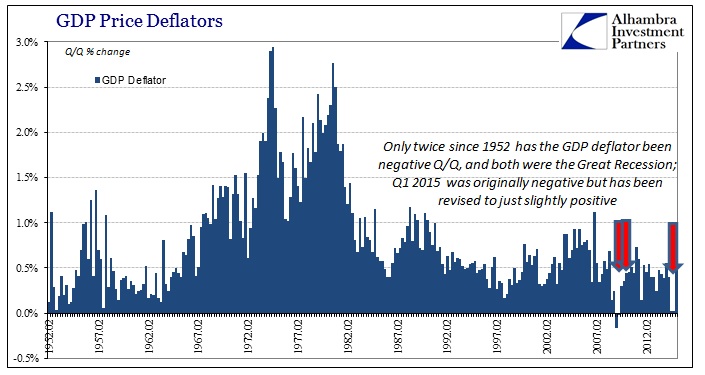 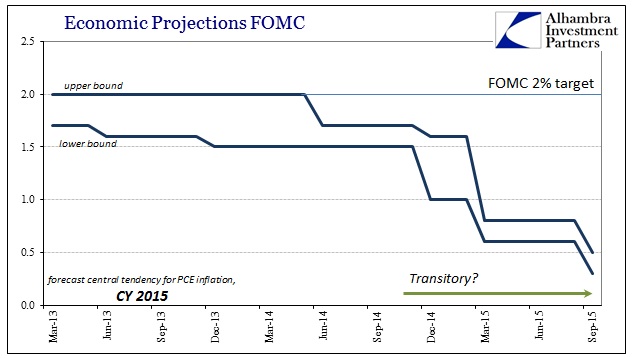 By quick historical reference, the only other periods where “inflation” finds itself so deviant is during recession or depressive economic and financial influence; i.e., demand. The current state and forecast trajectory of the “dollar” would certainly make up this unannounced and dangerous other side of “partly.” The Fed cannot add such logic to its statement account because it continues to proclaim great labor success, which would be at direct odds with this missing “partly.”

Except that even that one success in policy promising has found its own unstated downgrade of late, beyond the fact that it cannot gain corroboration in the one area that links all of this together – wages. Back to the October 2015 statement:

The pace of job gains slowed and the unemployment rate held steady. Nonetheless, labor market indicators, on balance, show that underutilization of labor resources has diminished since early this year.

If that second sentence were actually true in the real economy apart from the dubious unemployment rate, the record of “inflation” would not be so contradictory. Supposedly “slack” is being worked through yet there is nothing but the umemployment rate to suggest it. Again the circularity: the unemployment rate means that slack is being reduced so that less slack is showing up in the unemployment rate. In that way, even the FOMC’s own attempt at suggesting its necessary exit is actually a big part of “partly.” The lack of internal consistency is the balance of this orthodox methodology; not least of which is the FOMC’s emphasis, as Yellen declared in September, of a “strong” domestic economy that cannot, apparently, withstand even a slight alteration from ZIRP.

Therefore, what is contained within “partly” is everything that matters but none of which can be included into the mainstream assessment as it would blow the whole thing apart (including the ridiculous idea of a long run anchor derived from “professional forecasters”). From the point of view of rational expectations theory, it is far better to imagine “transitory” oil prices as the most visible component of failure than to cop to a reality already forecast and validated by bond markets and especially the “dollar.” Unfortunately for Yellen’s Fed, the “partly” corner they have painted themselves within only gets smaller and more suffocating by the meeting. 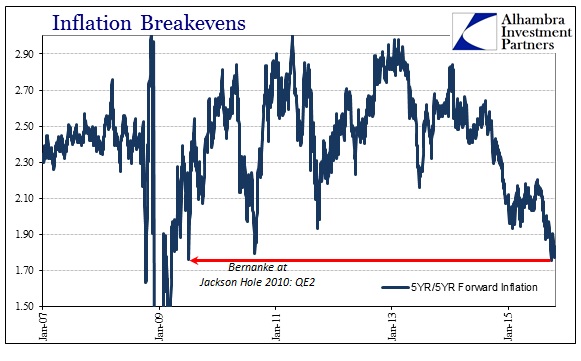