This is fast becoming the “12% recession”, as economists and media commentary rushes to quell any notion of systemic economic retrenchment. If it isn’t “the dollar” or “overseas demand”, then surely the dramatic (and always “unexpected”) reversal of US manufacturing is but a novelty to be regarded as inconsequential on Yellen’s road to the Promised Land. Reuters author Lucia Mutikani gives us two of the three at once:

Manufacturing, which accounts for 12 percent of the economy, has also been slammed by business efforts to reduce an inventory overhang and slowing demand overseas.

It makes for a very interesting, and telling, contrast given that just over a year ago manufacturing was riding high and nobody suggested it was “only” 12% (the parallel to the oil and gas downturn; when contributing to “the economy” it is combined confirmation, now that it is subtracting it is as if its own world). Here is Mutikani, writing for Reuters, on September 2, 2014, describing a multiple of high-rated PMI’s:

Tuesday’s upbeat data added to reports on employment and housing that have suggested growth remains sturdy, despite a slowdown in consumer spending in recent months.

It is exceedingly conspicuous that Reuters would note “despite a slowdown in consumer spending” as if manufacturing were wholly apart from it (and thus the consumer was the triviality to be ignored in the sure “boom” that was upon us) and yet a year later, with manufacturing joining consumer spending in the “unexpected” deluge of negativity, it is no longer important. You might be forgiven if you suspected the inconsistency of analysis is imparted through fitting “data” to one’s orthodox-driven conclusion; a year ago manufacturing confirmed the boom, now it is only 12%.

There is a great deal to be determined just from the trajectory of the commentary, as the slope of the US economy has certainly bent downward and nobody in the media is quite sure what to do with it. Part of that stems from these PMI’s themselves, as they never quite amount to what everyone seems to think of them. The ISM Manufacturing PMI had risen to 59 last September 2, which told us exactly nothing about the state of the economy heading into 2015. Not coincidentally, the last time the ISM Manufacturing was at that level was March 2011, just before the entire global economy lurched itself into an inflection that no central bank has recovered from – the Fed being only the last to face the PMI melody.

The fact that the PMI’s were seemingly unconnected to exposing the future economic direction is a warning about PMI’s, but it is also in the manner in which they may depart from their coincidental state. As noted above, even when the ISM was at 59 last year there were numerous indications that consumers (and businesses) weren’t faring all that well while the “dollar” system was already departing the Yellen track. This translation is multi-dimensional, now revealed in a gross withdrawal all over.

Massive monetary stimulus from Chinese and European central banks has done little to spur factory growth, moving a debate over more easing up the agenda and raising doubts over whether U.S. interest rates will rise this year.

A crop of industry surveys out on Monday pointed to October as another subdued month. Activity in China’s colossal factory sector shrank as global demand stuttered while euro zone factories again resorted to slashing prices to drum up trade.

The reports almost everywhere were actually quite dismal. Despite the growing consensus that August was the bottom for China, the official government PMI remained below 50 (which may or may not suggest contraction, in reality all it advises is that the prior trend remains) while the Caixin version (focused on smaller and medium businesses) rose only to 48.3 from 47.2 in August. Further, the official non-manufacturing PMI fell to 53.1, marking the lowest reading since October 2008. 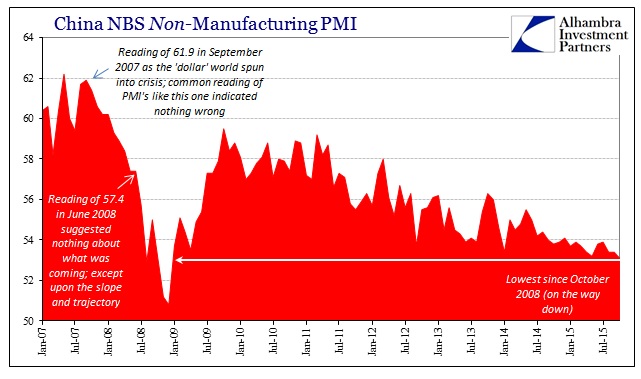 Individual readings constructively contribute very little to our understanding of what is actually taking place. Further, as China’s official non-manufacturing PMI demonstrates, even small trends over several months can be highly misleading. When this PMI series jumped to 58 in March 2012 from 55.7 that January, it wasn’t confirming a resurrection in Chinese fortunes due to all the inbound and excessive “stimulus” (which is what was pronounced then) it was merely variation within slowdown indications that had taken hold in the euro/”dollar” crisis of mid-2011.

Given what has happened both monetarily and in the Chinese economy since the 2012 slowdown, October’s multi-year low makes perfect sense regardless of whether it fits the above or below 50 narrative. The same holds for US manufacturing, as the second Reuters article alludes in actually referencing such corroboration.

The pedestrian surveys will focus attention on the U.S. Institute for Supply Management (ISM) measure of manufacturing due later Monday which is forecast to have flatlined in October.

The ISM Manufacturing actually declined slightly to 50.1 from 50.2 in September, marking a new multi-year low. And while the indication above 50 will be emphasized, it doesn’t make much difference given where the ISM reading has come from. 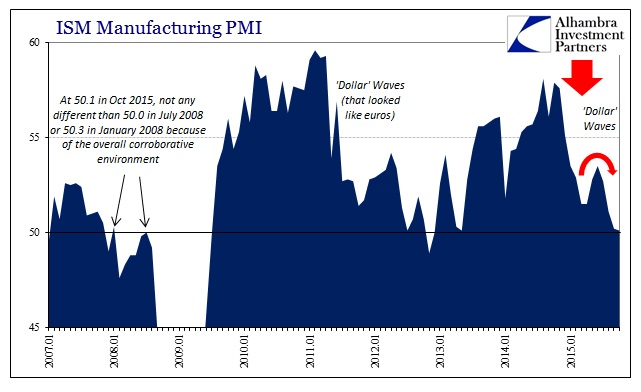 In other words, the ISM figures, as all PMI’s, by themselves are pretty useless in determining economic movements. In terms of “slowdown in consumer spending” it adds a little granularity as the business environment continues to slowly and painfully descend. That context supplies us with last year’s grand error, as the increase in the various US PMI’s was not about the pending “boom” but instead the inventory error for believing in it. At unseemly low levels in later 2015, we are witness to that correction (ongoing). That such would apply to the “12%” in the US as well as the rest of the world does not indicate what the FOMC wishes. That harmonized downside is a (global) warning not to be so lightly dismissed; both in terms of economic direction and the impotence of “stimulus” and central banks.