There is no accounting for revisions because by the time anyone remembers it was too late. The same is true for monthly variations that can easily become swallowed by overarching trends unconcerned with such small time periods. All of that means we shall repeat, over and over, the same incessant dichotomy whereby everything looks bad and even recessionary but the payroll report erases it all.

I’m not actually speaking just of October’s headline, as this month has already been repeated in kind twice before just this year. Here is what I wrote about the May jobs report released on June 5:

It makes a very interesting contrast, to start the week under cloud of suspicion only to end it with its reverse. Economic data was routinely awful earlier, though for the most part financial markets are moved more by how that might make Janet Yellen feel than anything of a fundamental basis for all those prices…

None of that matters anymore, apparently, because the headline jobs figures wash away all economic sins. Like January this year, this payroll report was just about perfect: high headline, jump in full-time and labor force, and at least a close read on the Household. All of that adds up to very little outside of what seems to pass for conventional “wisdom” about the economy. I’m not sure when it happened, but the payroll figures seem to have surpassed everything else in terms of the economy’s weight in at least setting mainstream media perceptions, likely because bubble rationalizations do not like to be disturbed – and the payroll report is about the only account that obliges.

I could honestly just reprint those passages and call it a day on the payroll mismatch. And that highlights the rather unusual uselessness of the one economic account that most people associate with broad economic function. From that point forward, the US and global economy fell much further, with much violence financially, rather than what was suggested by the “perfection” of May’s first look at it. Of course, those months around then were eventually revised significantly lower, not that many have noticed, such that the clear slowing inflection even in the Establishment Survey rated sometime instead around January; which was, not coincidentally, that first “perfect” payroll report of the year.

Quite significantly, then, it was the “cloud of suspicion” that ruled the marginal economic direction and not the mainstream crowing about resiliency in hiring and the economy. To the contrary, the Establishment Survey has itself reluctantly conformed and converged at least in good part with that indignity; the major point being corroboration above all else.

The same “rule” applies for the October report which, as the other two perfect months, contains even within it the same lingering and increasingly orderly and candid doubts that have plagued the mainline optimism this entire time (beyond just this year). The labor force, for example, may have risen by more than 300k in October but remains about 150k below January. A shrinking labor force is not any kind of positive remark upon hiring resiliency or whatever the Establishment Survey might propose on its own narrow variation. 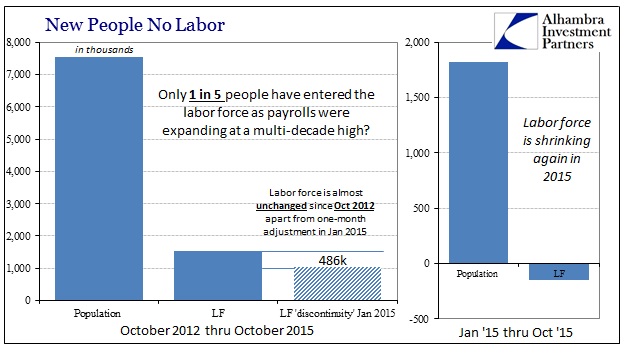 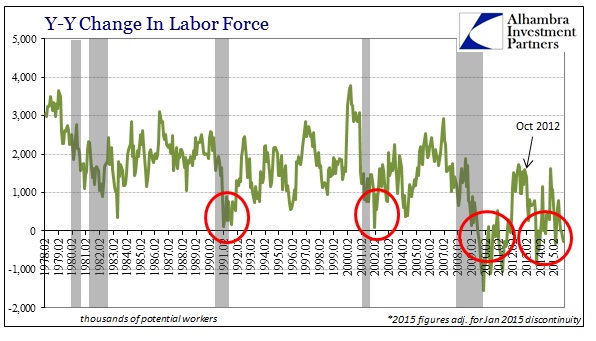 The same can be written of the Household Survey; though it, too, increased by more than 300k, this view of the aggregate employee count remains at less than half the pace of the Establishment Survey. Again, that does not suggest what everyone wants to make of the overall payroll report, especially since this lag and denial has persisted since October 2012 and has only grown worse this year (as timing very much matters particularly in search for corroboration; positive or negative). 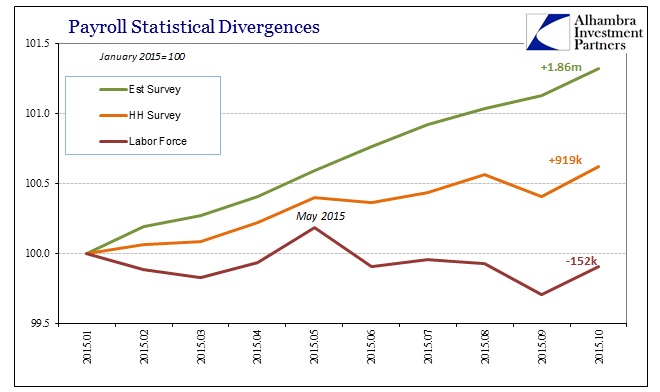 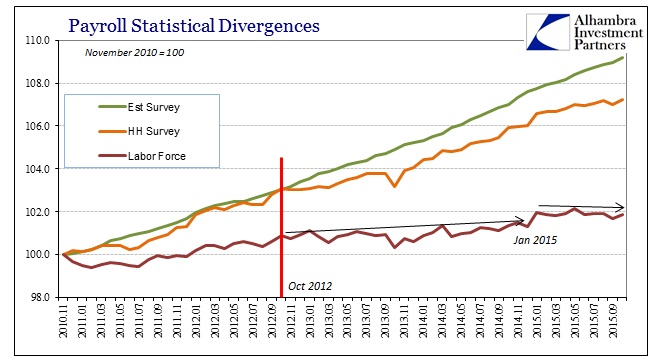 Then there is the ubiquitous link to jobless claims, a series that continues to “improve” regardless of pretty much any factor anywhere. The statistical linking between them is undoubtedly the trend-cycle setting which again suggests rather more of the Household Survey or Labor Force version of economic employment than all the adjustments and imputations that cater to orthodox subjectivity by design. No matter the October “perfection”, the trend even in that mainstream view is still in the wrong direction (one month’s variation nowhere near enough of an erasure) meaning verification and substantiation continues quite fully under the “cloud of suspicion.”

The argument, then, is left only to the degree by which the negativity has already piled up and how much further it shall do so. As noted above by comparison with the May and January payroll reports, we won’t find any such indication in the headline figure. It, after all, does not even withstand the scrutiny of its own secondary indications. Those are much more alike the increasingly dour view of the economy, which leaves, yet once more, the Establishment Survey on an island of growing irrelevance. As it is, last year’s “best jobs market in decades” cannot be found anywhere this year in any supporting economic manner (to which the FOMC itself has repeatedly attested), having already been rendered moot before any of these later questions and clouds arose.

So the Establishment Survey has become like China’s PMIs and IP; every monthly (or even multi-month) upturn is taken as definitive economic gauging despite that nothing else suggests as much and not long thereafter such “certain” optimism is totally forgotten and overwhelmed by continuous “unexpected” othering. Rather, those conspicuous upward variations amount to nothing more than anomalies against the quite durable, undeterred and still gathering downtrend that truly dates back much further to something actually meaningful. 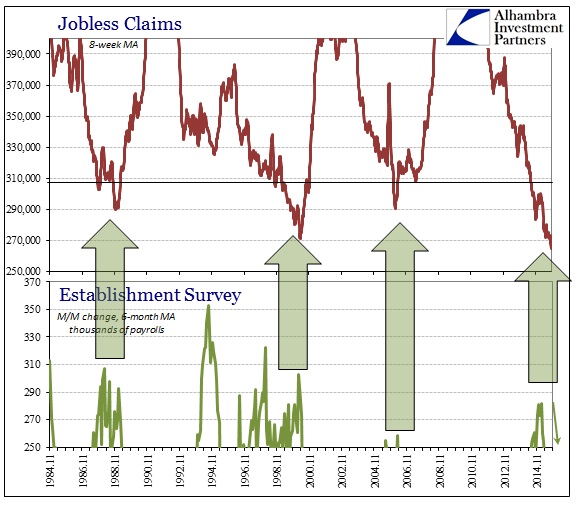 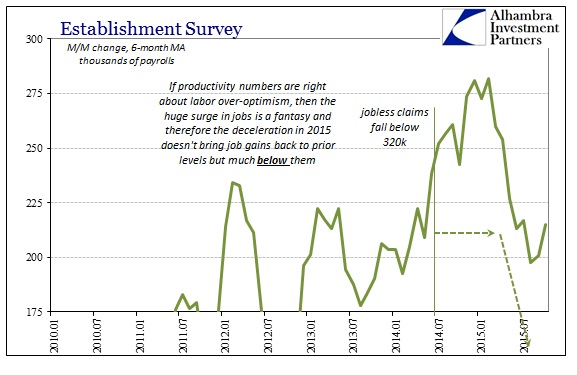