What Can Yellen Really Do?

What Can Yellen Really Do?

For one, eurodollar futures are “obliged” to take account of any threats from the FOMC even though, in the end, they might only be self-fulfilling. Because the Fed has very little actual ability to condition money markets, none of that is truly “real” but there remains the unknown and money dealing agents still seem reticent about any kind of (further) showdown. Where the eurodollar curve was shriveled toward nothing up to the September payroll report released on October 2, the October payroll report has advanced the recent run of Yellen’s apparently restored resolve.

At pivotal points on the curve, such as the June 2018 maturity, that has obliterated the “dollar” run trend that began back around July 6. However, as the fuller curve displays, that seems to be only a change in policy perceptions and not especially much more than that. 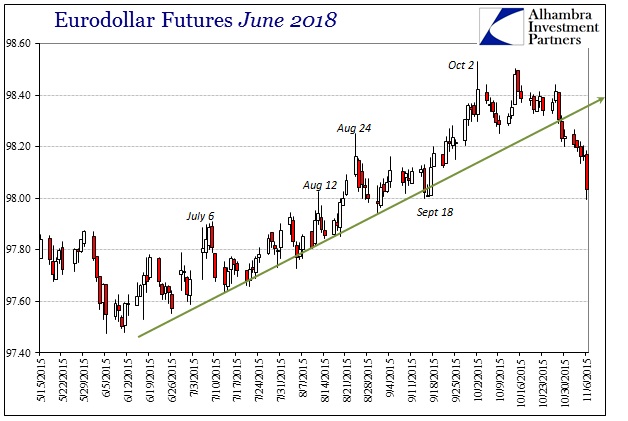 Again, the entire curve had been flattening up to October 2 before meandering throughout October while trying to survey that FOMC resolution. The October FOMC seems to have reversed further doubts and pushed expectations back toward a rate hike. However, as the eurodollar curve today demonstrates, that amounts only to a shift in that policy view rather than a complete outlook. 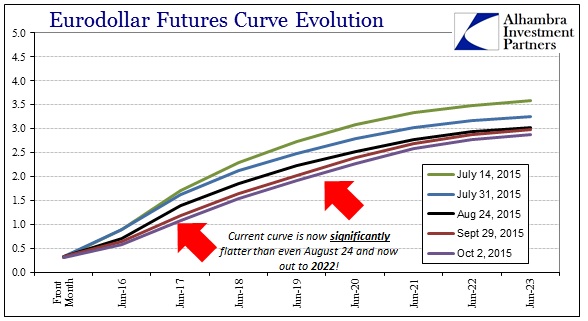 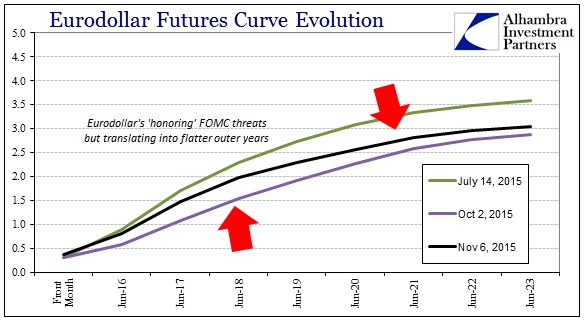 Even in the shorter maturities, the curve is still inside where it was at the eurodollar outbreak of the last “dollar” wave/run. Further out, though, the curve remains much, much flatter. Again, that suggests eurodollar “obligations” about policy decisions and not wanting to contest that fate directly. In terms of economic progression, that flatter curve continues the trend.

That much we can observe directly via commodities. Copper as of yesterday’s close revisited the lowest closing price since August 26; matching that day’s multi-year low. So far this morning, copper is trading down to $2.241 at the December maturity, which is in the same range as it was on the morning of the global liquidations of August 24. 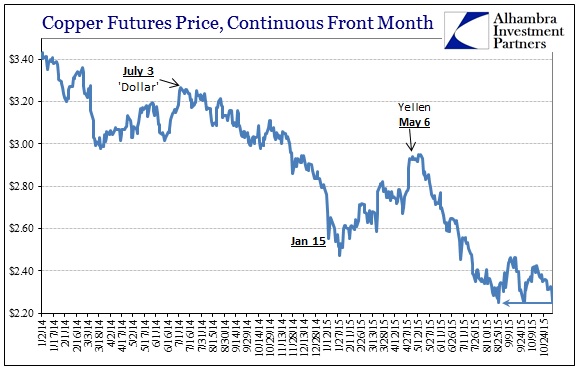 Crude oil prices continue to be similarly unresolved, trading more so in a conspicuous range both on the front and toward the rear. The shorter end of the WTI curve is, as always, being directed by the “dollar”, or at least perceptions of what that might be. Thus, the lack of discernable trend echoes what was in eurodollar futures. The fact that WTI has continued on much the same sideways line even after the front end of the eurodollar curve succumbed to Yellen madness bolsters the eurodollar case – only a policy shift. The back end of the WTI futures curve continues to be almost pinned in the same very narrow price range, marrying “dollar” with physical economy. 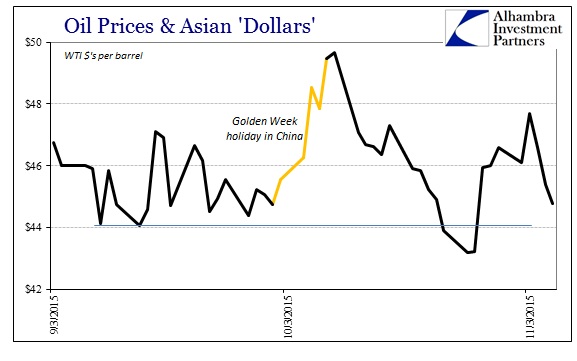 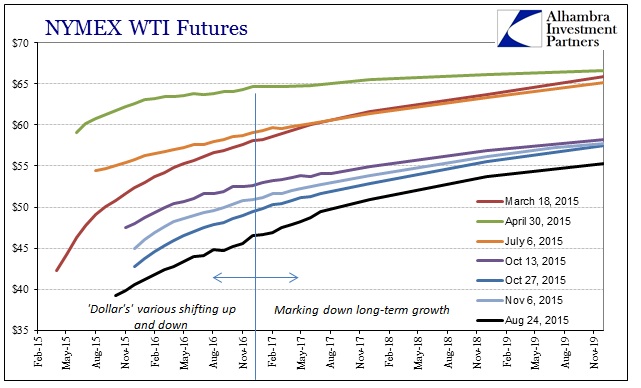 That physical economy according to domestic crude oil continues to be grim and getting more so. Inventories that had started to rise, coincidentally, around the week before August 24 have surged of late. The reported domestic crude oil stocks have neared again their 80-year highs despite production cuts from the summer largely holding. Less production and rising inventory, especially given this time of year, equates to “something” about demand. 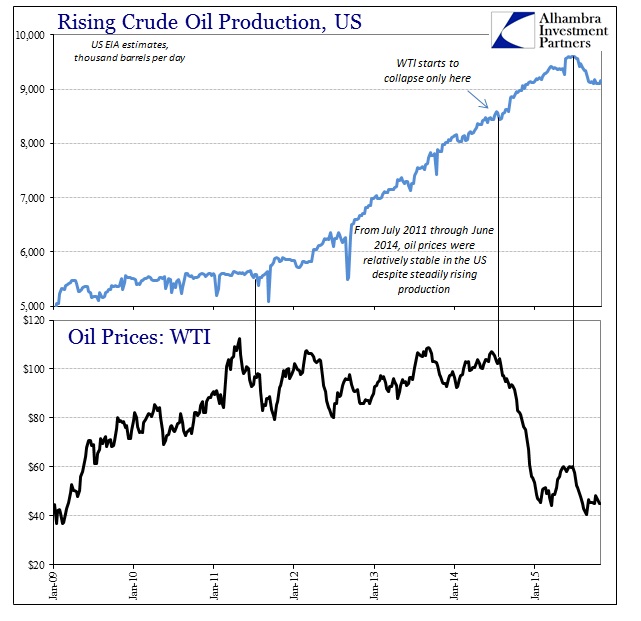 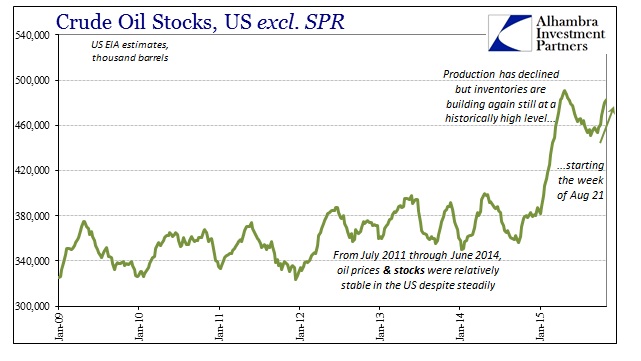 With crude stocks moving up solidly despite inventories being still almost one-third above the “cycle” trend from 2009 through 2014, the economics of that behavior suggest the opposite of what the FOMC would like to project. And that would seem to bridge the eurodollar curve’s front and back ends, aligning it with commodities more generally. In that view, eurodollar futures are suggesting exactly what they have been for almost a year and a half – that the Fed might or might not act, but if they do it won’t alter the economic course but only wield the potential to make a bad (and growing more so) physical and general economy situation that much worse.

In the end, it may not as much matter except as a test of these kinds of perceptions. The history of FOMC decisions during this “dollar” run dating back to last year has been quite the same; hint with greater magnitude at imminent rate hikes only to relent and recoil at what is wrought (and, really, what is rot underneath). 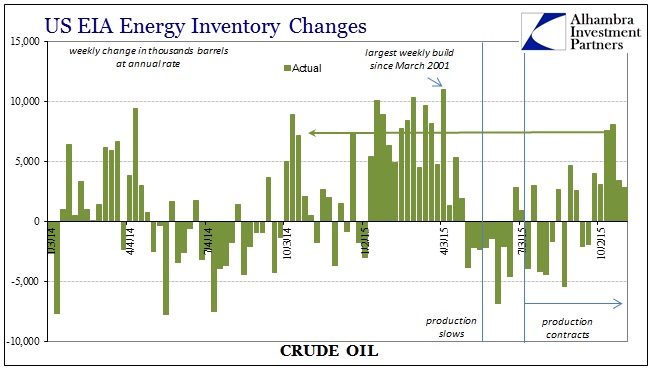