Last week’s survey data around the world was a bit more mixed than anyone would have liked, an obvious statement that yet deserves the emphasis. Europe, for instance, remains mired in a fog of zombie-like “growth” that is notable for both a distinct absence of QE’s promised impact and the related Japan-like steadiness that suggests nothing good about near and long-term prospects. In China, commentary was somewhat more cheery on a rebound in the Services PMI to 52.0 from 50.5 in September.

There was little sign the European Central Bank’s massive stimulus program was boosting economic activity or price pressures in the bloc, and the survey showed firms returned to price-cutting last month to drum up trade.

The happy optimism of China’s extrapolated rebound, of course, didn’t survive the weekend once the trade figures were released. And I think that is a microcosm of the economic perceptions that now dominate in a clear shift away from the “impossibility” of economic retrenchment that began 2015. At best, there is lackluster growth with continued, outsized downside risks attached (in Europe, zombie growth but very real worries about what stubborn “disinflation” or “deflation” might mean since QE has no effect on any of it) or, where economic trends are already speeding past lower barriers, each monthly positive variation is taken for the awaited rebound and recovery but with optimism that can only survive for at most few days (and sometimes only a few hours) before being rendered wholly obsolete. The entire spectrum of perception about the global and a great many (including the US) local economies has been pushed that much lower.

In other words, there is no longer much, if any, economic upside, replaced with more than hints about an unquantifiable downside that stubbornly advances closer beyond sensitivity. The “dollar” and its vast connected proxies, I believe, are reflecting as much. As noted earlier, dealers in US$ repo have continued to hoard UST collateral which, unfortunately, is quite consistent with such a changing outlook.

Unlike stocks, that view has already been worked into various asset prices. There were several important new lows across “dollar”-related spaces today. Copper hit a new multi-year closing low while inching ever so close intraday to the August 24 liquidation point. 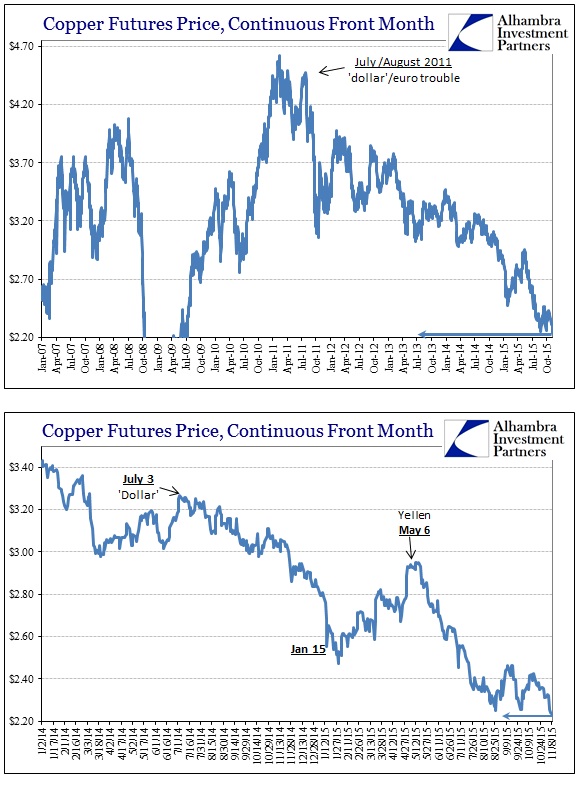 While crude oil prices have been less prone to such newness on the downside, the sideways trading in WTI ominously reflects similar “indecision” that predominated trading in May and June before the second great “dollar” wave applied. 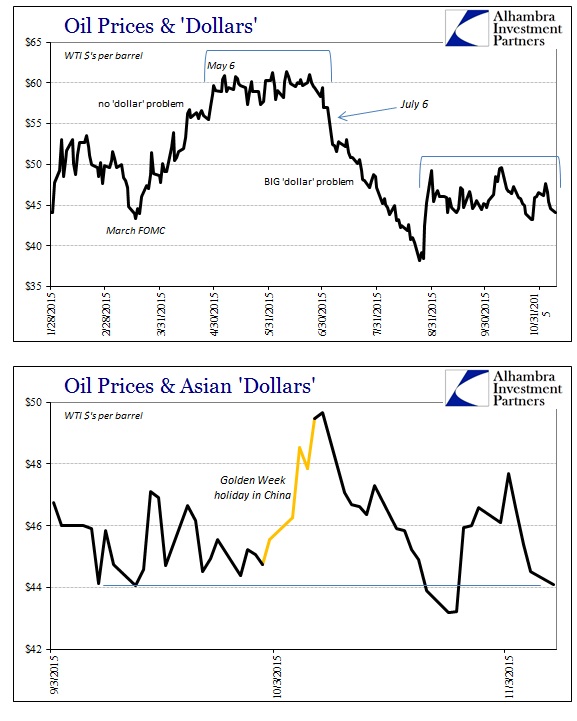 Junk credit continues to be sold without any detectable bargain interest. The S&P/LSTA Leveraged Loan 100 scored, like copper, a new multi-year low in the market value component. That nadir was echoed also by a new low for REM, the mortgage REIT proxy that stands as a relative view upon MBS-driven liquidity more generally. The ETF has seen an October rebound like that in stocks, though of much less intensity, now more than wiped out in this latest downward lurch. The mainline tendency is to assign “higher interest rate” expectations to that trend but, as you can see below, the steadiness of the erosion despite the will they/won’t they FOMC stands as liquidity rather than policy projection. 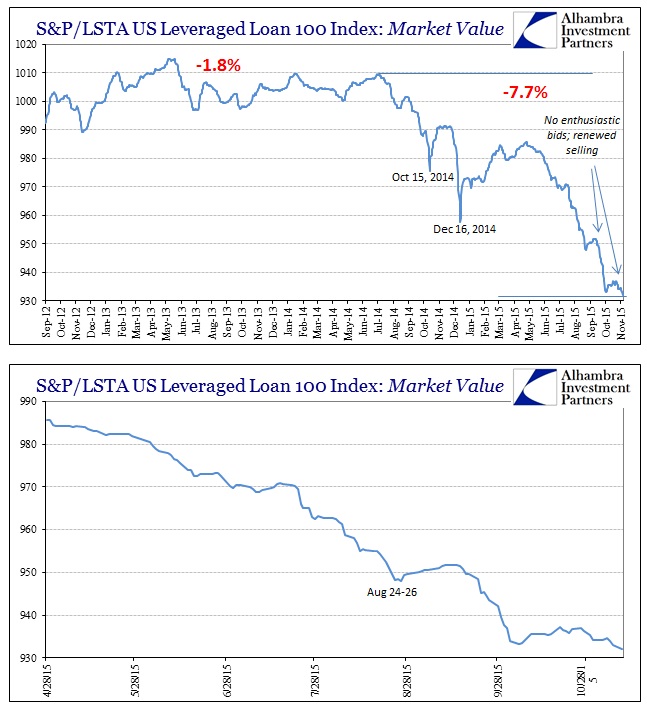 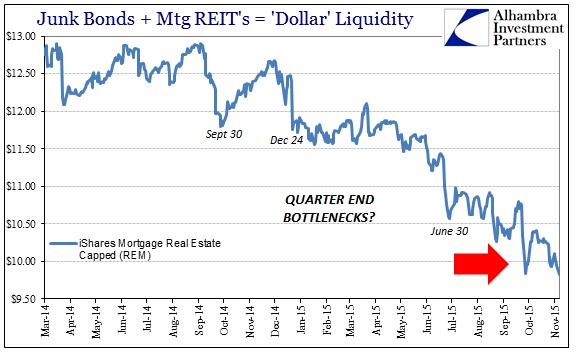 So again we feel the close tug of systemic illiquidity as it transcends the usual noise about assurances to ignore or trivialize all this growing uncertainty. As I detailed earlier, the relationship between junk pricing and this “dollar” eventuality is too obvious to set aside or diminish as such: 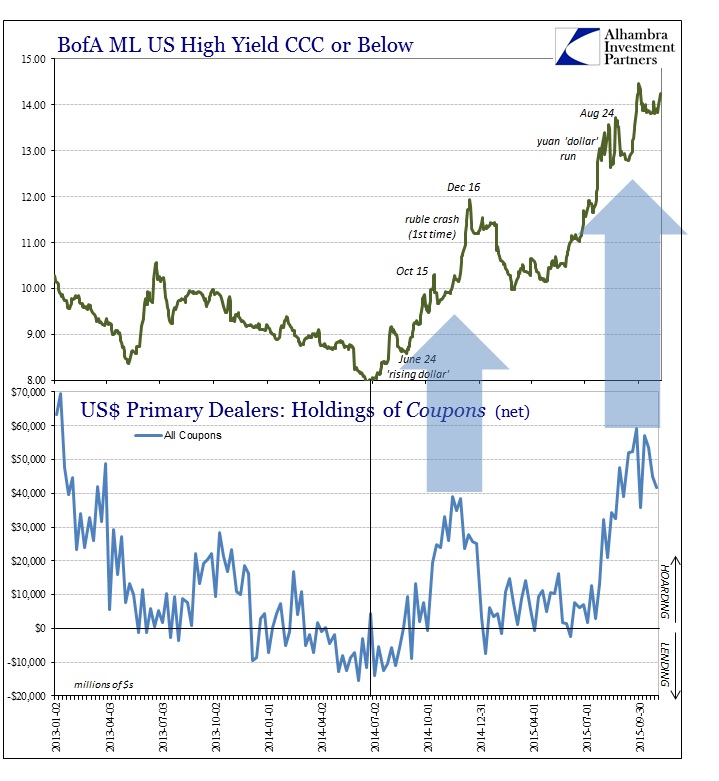 In these respects, the “rising dollar” is nothing more than the visible expression of that shift in economic perceptions. The less the expected or hoped-for recovery upside, the more the financial end of the “dollar” attributes “tightness” as eurodollar banks adjust the speed and intensity of their determined dealer exit. The more the economic center of gravity moves toward at least global recession, the more asymmetry and non-linearity of that negative “dollar” transformation.

Even though stocks and other assets have been trading in their own world mostly free from all this more hidden esoterica, the full weight of this analysis suggests that can’t be more than a temporary deviation. Since it is the angle of economy that is ultimately driving all of this, everything depends upon a global economy that has already been beaten down far past anticipation. Despite Yellen and orthodox economists downplaying these risks, that they are already being priced into “dollar” markets instead confirms the regular beat of continuing negative global data. Thus, “transitory” cannot escape the “dollar’s” grasp as this all becomes more and more self-reinforcing over time – negative economic perceptions become negative “dollar” liquidity factors, weighing further into the real economy (globally), and thus confirming and heightening negative global economic perceptions.

Rational expectations theory always contained a logical basis; orthodox economics simply errs in placing too much emphasis on artificially influencing expectations as if that were a perfect substitute (or even a close one) or a good approximation of whatever economic channels that might flow through (redistribution). What we are seeing now is the organic opposite, the natural state of changing perceptions under these conditions that central banks so loathe (which is their current and growing desperation). Unfortunately, once beyond a critical mass and critical state, no amount of central banking, real or imagined, can intrude to bring it all back. I don’t know if we are at that point yet, but the “dollar” is certainly working its way toward it. As you can observe empirically over and over, especially in the past eighteen months, unfortunately the “dollar” always wins.