The Conspicuous Temperature Gradient of Finicky US Consumers

The Conspicuous Temperature Gradient of Finicky US Consumers

Janet Yellen and orthodox economists claim that the economy can only be gaining, and that word is taken, on faith, as if some updated, modern gold standard for meaning. No matter the contrary in actual evidence and observation, the “word” remains as if diktat were the only employ. It has produced some very strange dichotomies, particularly of late, where those within that economic cage are struggling mightily and obviously to find some kind of consistency with it all. It has led to an Orwellian deployment of qualifications and words quite contrary to their established meaning.

For one, apparently the American economy cannot withstand anything but the fattest, meatiest part of the Bell Curve for temperature. Anything outside of a narrow range in weather (which, if you are paying attention, is what weather actually is) and somehow economists and their media parrots become disenthralled and unhinged. We all know about the constant appeal, three winters in a row, of cold and snow and vortices of some blusterous nature, but now warm weather has been assigned the same depressive instincts. I wish I were making this up, for it does not suggest anything good about the economy nor the state of the commentary class that still clings to Yellen’s desperate narrative no matter how much and how deeply actual observation moves sharply against it all.

As expected, balmy October days failed to inspire people to shop for winter coats, but the retail sales results were even a little worse than forecast. The Thomson Reuters Same Store Sales Index actual result for October 2015 showed no change, missing its final estimate of a 0.3% gain. Excluding drug stores, the SSS Index registered a -0.2% comp for October, missing its 0.1% final estimate.

It’s important to note that these results are not final, as the Gap will report October SSS on Nov. 9. However, 75% of retailers missed estimates, hit by lower gasoline prices, the effect of a strong U.S. dollar and the warmer-than-usual weather. [emphasis added]

A negative same store sales index register is recession, but Yellen has declared that all “transitory” so the people at Reuters are left making a mockery of their own work. Worse, Thompson Reuters just over a week ago, in projecting the alarming re-appearance of negative retail figures in its own index, even stated that a negative was consistent with recession:

During the first recession, in 2001, the index dipped below the 3% healthy mark and remained within the 0% – 3.0% range. Then, the SSS Index recuperated nicely afterwards and consumer spending remained within the 2% to 5% monthly growth during 2002 – 2007, for the most part. Subsequently, the index dropped to its lowest level ever during the Great Recession (Dec 2007 – June 2009). Since, then the index has fluctuated as consumer behavior has changed since the Great Recession. The index also started to dip into negative levels similar to the Great Recession. [emphasis added]

You can see the logical strain just in the progression of that paragraph, where once low and negative results were recession but now as if “consumer behavior has changed since the Great Recession” can address the recurrence. The Yellen/economist narrative can only be registered as something like a cult, for it makes otherwise quite sensible people doubt their very own observations and conclusions. Again, Thompson Reuters SSSI clearly shows something very much amiss, both in recent context and historically so. 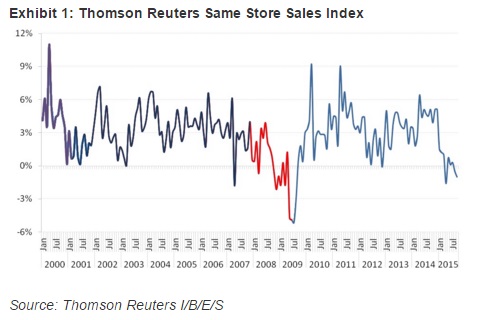 If it walks like recession, quacks like recession, it must be…weather? If that inappropriate assignment were left to just this one outlet and facet of 2015’s “unexpected” seriousness, then this would not be noteworthy; it would rather be dismissed as an agency with an agenda. But it is endemic. In almost every story about the sudden and sharp departure of consumer spending, especially as noticed by the state of manufacturing, there is weather but always jobs, employment and falling gas prices as if those factors were somehow to be magically applied in every way they have not so far. That is, instead, just the Yellen intrusion of how the economy is “supposed” to be operating even though, again, it clearly has not in a stretch that dates now well more than a year.

What is left, then, is to over-emphasize any small monthly variation as if it were gigantic and exclusively meaningful. This has been the constant tactic with regard to Chinese figures, but has now found itself being used pretty much consistently. For example, Gallup’s daily spending tracking poll hit $92 in October, which was a few dollars better than September. As Gallup points out, that is actually the seasonal trend as October spending has been about $4 or $5 more than September in every year going back to 2008 except two. From that, however, Gallup is projecting the possibility of a “robust” Christmas season.

Other Gallup research shows that Americans are planning to spend more this year on Christmas presents than in recent years, suggesting that the October uptick could be another indicator of robust retail spending as 2015 draws to a close.

As you can plainly see from Gallup’s own data, the word “robust” holds no place in what is shaping up for 2015 – and, in fact, has not applied since 2012. From the chart below, the slowdown in 2012 is unmistakable as is the further dip in 2015 which features a noticeable absence of even 2013’s and 2014’s upward peaks. The recovery is nowhere to be found in the figures so it is applied instead in misleading and often duplicitous commentary. 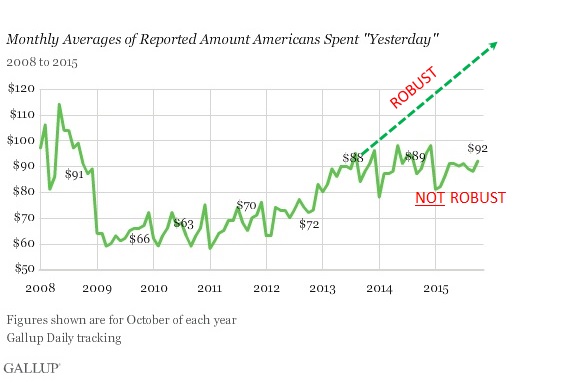 With the Census Bureau’s retail sales report for October looming, I very much doubt as if there will be a huge upward surge that will match the rhetoric and excuses. By all complete sense of scrutiny, it is obvious that “something” is wrong with consumer spending and retail in 2015 as even a departure from what has been wrong since 2012. But because Janet Yellen and the official gatekeepers of the economic narrative refuse to accept that as interpretation (which is their one, true constant feature) the media strains to define the gap as something other than what it is.

In the real economy, unswayed by such nonsense, the figment is revealed in continuous and deepening production and transportation cuts further imperiled by what is becoming an epic inventory story. Not a single element of that is consistent with what dominates economic discussion as an ongoing recovery, but is quite comfortable with all prior recession experience.