With financial markets sharply glued to the “dollar’s” renewed mischief, that means everything lies at the feet of the global economy. The US economy is supposed to be the one colorful and lively example in that otherwise souring picture, even if it has been temporarily pushed from ideal. In fact, despite all that has happened this year, and “unexpectedly” continues to happen, there are those still welded to the idea of “overheating” as the largest risk. That is, of course, the remnants of last year’s idealism in but a few highly adjusted figures.

In September 2014, just as the “dollar’s” full weight and fury was being lined up for the first time, Jared Bernstein argued this dichotomy in the Washington Post.

Which do you think is a bigger problem facing the U.S. economy right now: a) inflation, or b) unemployment? Do you think wages are growing: a) too quickly, or b) too slowly? Which is the bigger threat to the economy: a) that it overheats, or b) is undercooked?

I’m going to make the bold assumption that most of you answered “b” on all of the above. And in a moment, I’ll provide the data to confirm your gut. What’s unsettling, and in need of explanation, is why so many influential voices, from the punditry to the markets, answer “a.”

As for “why” highly respected economists were certain of overheating, the answer lies in the fact that economists, respected or not, are not anything like economic experts. They are, almost in total now, simple mathematicians and statisticians. Their world consists not of flesh and humanity, but of overly simplified, though elegant, regressions and equations that are supposed to represent the impulses of shorn human behavior. Thus, their correlations especially of the past few decades have forced an attentive drift away from the direct focus upon wages and productive investment and into asset prices and financials because that is what their numbers tell them has been driving wages and productive investment.

From that point, there has been no evaluation about whether such correlations are at all appropriate and consistent with a truly healthy and advancing economy; the math banishes all such judgment. And so, as Bernstein warned, this year has met by the confused “influential voices” while the rest outside plainly live the gathering, and so very determined, downward pull of the “dollar’s” turn.

In May, Janet Yellen, one of those still somehow “influential voices” (which, relatedly, is a reputation based solely upon credentials rather than talent and demonstrated ability apart from statistics), projected great economic confidence in speaking to a group in Providence, Rhode Island. Even though the economy had sustained an obvious blow in the early months, that was taken as anomalous with her view of economic risk still forever upward.

“If the economy continues to improve as I expect, I think it will be appropriate at some point this year to take the initial step to raise the federal funds rate target,” Yellen said. Translation: the Fed could raise rates in September…

A little less than a month later, the Wall Street Journal was actually arguing that the Fed should just let the economy “overheat” since that would be quite good for at least some time:

Ordinarily, with unemployment now approaching levels associated with an economy at full strength, the case for raising rates would be open and shut: the Fed would not want unemployment to drop so far that the economy overheats and inflation takes off.

But these are not ordinary times. An overheating economy right now would be welcome: It would help nudge inflation back to more normal levels, restore some of the long-term growth potential lost since the financial crisis, and boost ordinary workers’ wages more effectively than remedies such as big increase in the minimum wage, which can reduce employment for the low-skilled.

To find now that so many economic statistics have performed quite otherwise on “this” side of that summer divide upends the whole of it. If the early winter storm of consumer mystification was the abnormality, then continued distress in such widespread (and global) form is its full, complete admonition. This morning’s report on retail sales demonstrates this point in all its ugly and atrocious implications. This is October and so the worst of the early part of this years is supposed to be a trivial memory by now, lost in the overshoot of economic overheat.

Despite auto sales rising nearly 7% year-over-year (which is actually subdued for all the cheap, subprime credit pushed into it), full retail sales grew just 1.81% in October. Growth has been below 2.5%, the dividing line between concern and alarm (health exists instead between 6-9%, something this economy has not seen since March 2012), each of the past three months and seven of the past nine. Stripping out auto and food sales, retail figures have contracted in the last three months and seven of this year’s so far ten. 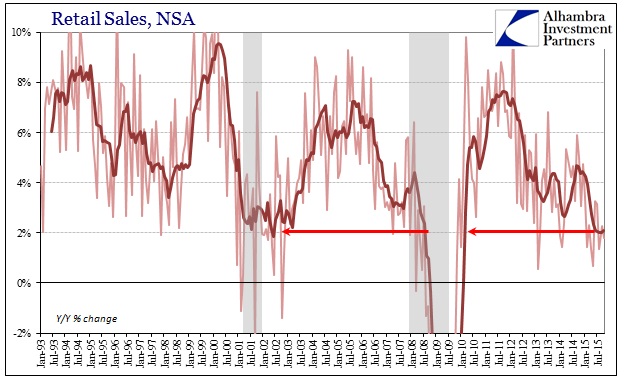 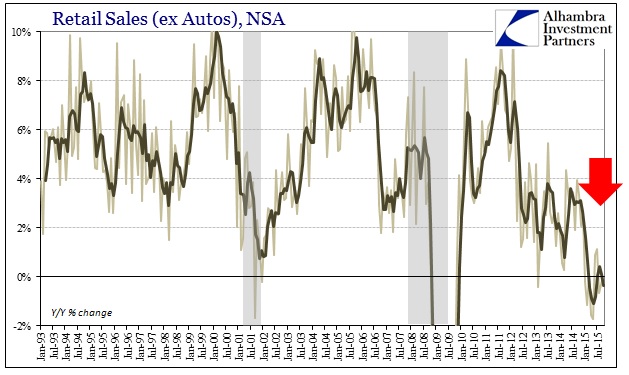 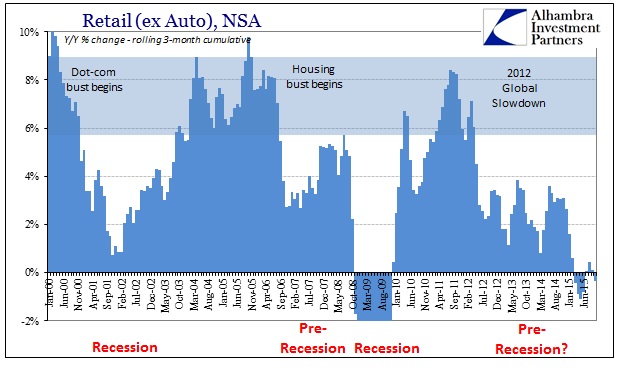 Consumer spending just isn’t there, a point reflected best by the nearly identical appearance of the current trend as compared to the dot-com recession already – in fact, as of October’s deflating estimates, 2015 has started to undershoot that recession as it quite ominously still lingers. As mentioned earlier this week, this was not much of a surprise given the state of retail as presented in other formats already forcing economists to go beyond the mundane excuses to the truly bizarre. 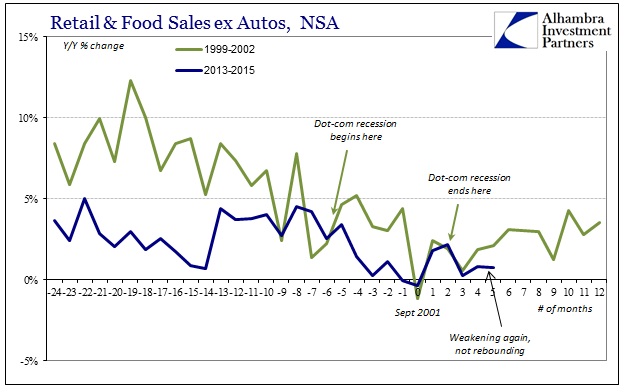 When compared to even the slowing job growth of this year, as estimated in the Establishment Survey, retail sales just don’t add up. Either jobs are real and they produce no spending (actually a reduction) or the perpetual difficulty of this persistent “recovery” environment is forcing subjective skews, and the basis for this overheated orthodox rhetoric, to become that much more obvious. There has been almost no relationship between the purported “overheating” state of the labor market and actual, booked economic transactions, or what is supposed to be of “demand.” 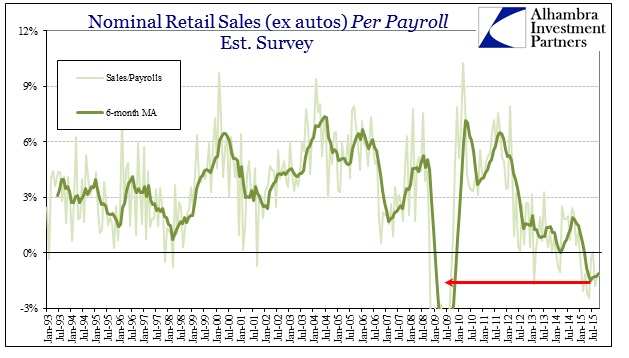 There can be no justification for claiming inflamed risk given these brightly contrarian circumstances in consumerism. It cannot be that the economy is nearing, or even in the direction, of full health while retail sales, the primary form of expected monetary transgression, languish now nearly a year among the worst of the entire data series. October shamefully accommodated what passes now for economic consistency. 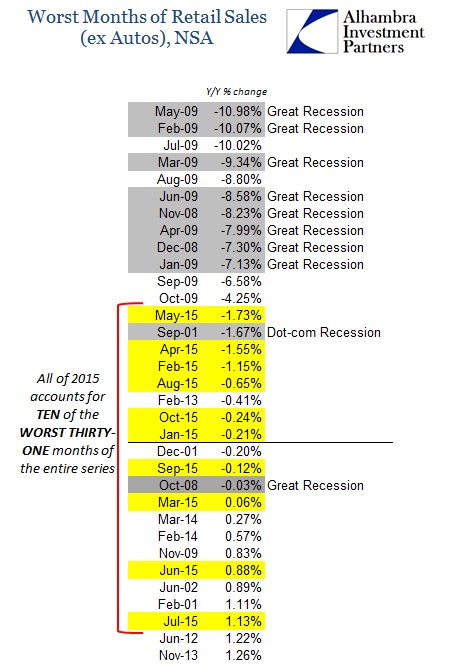 What is left is actually startling in again its alarm; all this has taken such an obvious weaker bend but yet there is no indication yet of the actual worst. In other words, the true state of the labor market is perhaps unsettled but has surely not been pushed into full recessionary claim with widespread and sharp job cuts and unemployment; and still spending is already a disaster, the near opposite of overheating. Like production cuts but inventory still flowing, the point of those trends is not just down but at an intersection where it all, at some unknown threshold (perhaps after yet another truly bad holiday season that confirms consumers are never going to live up to the fantasy of “influential voices”) just drops precipitously.

Rational expectations theory is just a mathematical simplification, a short cut, that allows DSGE models to avoid infinities, yet it is taken by economists to completely upend what was once common knowledge of actual economies. They have glimpsed and measured past correlations between asset prices and economic function as if causation were fully established (because rational expectations forces economists to view all asset prices as fully correct, fully efficient markets). So you can imagine their great confusion when they might learn how asset prices might be so divorced from common economy, a not uncommon occurrence as we have seen in at least two great and disastrous episodes already this century.