The Implications of October 15 And Money Market Duality

The Implications of October 15 And Money Market Duality

The duality of gold in the modern wholesale fabric has perhaps been on display this year more so than at any time since 2008. That year, the year of the eurodollar-drawn panic, gold was seemingly more volatile than any other asset – if only for its virtuous tendency to as sharply rebound for every major crash. And in 2008 there were three, with gold staging higher and soundly beating most asset classes through the whole of the event.

The two opposing forces are not set in match by some traditional sense of central bank “money printing” so much as the modern view of central bank absurdity. On the positive side, gold is the safe haven that is believed to survive any and all central bank miscalibrations and the inevitable total breakdowns in the theories that set them. On the negative side, there is that contemporary, ephemeral wholesale “dollar” which, for gold, sets within the catalog of interbank collateral and thus, in leasing and swaps, as pushing down against price.

In 2008, that was the gyrations of gold as each side jockeyed for marginal supremacy. Gold was uniquely surging all the way until Bear Stearns failed; from there, it sharply and severely declined until the very day the Fed finally expanded the collateral eligibility for its ad hoc, afterthought wholesale experiments. And so it would repeat, with the “dollar” taking turns with safety to produce the golden roller coaster. 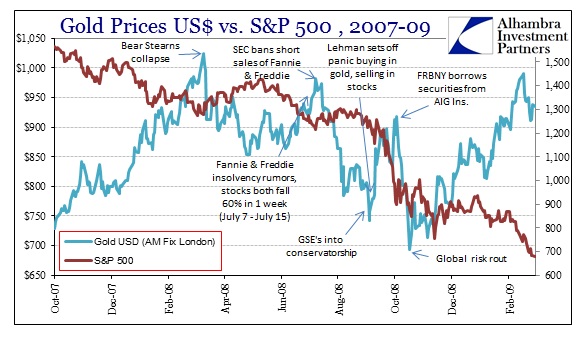 I think we are seeing the same again, and in many ways it may be providing the same mixed signals to those not versed in these wholesale, eurodollar ways. Whenever gold is so sold, convention declares an end to all investment and risk concerns as if everything suddenly has been fixed. That was the great case made back in 2013 when gold crashed, but that, too, was far more about the overwhelming “dollar” disruption than any sort of purely positive view of the world.

Lately, October 15 has been showing up all over the money markets. So it is with gold, hitting its most recent high of $1,183.35 (morning fix) smack upon October 15; it has been downhill since. My sense is that the decline served as an “all-clear” for other asset classes to take the reprieve the Chinese Golden Week had provided to further bid, bid, bid. 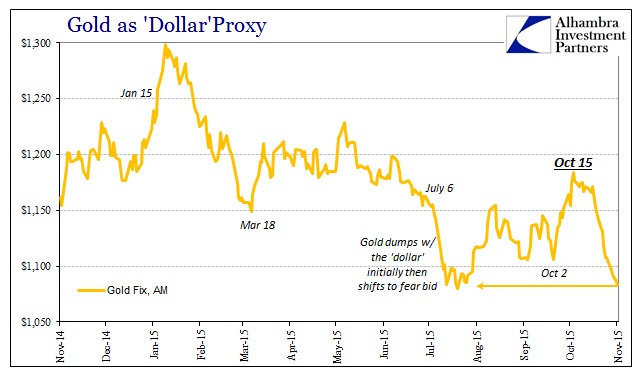 It wasn’t just gold, either, that behaved in this sharp turn of two-faced fashion. The Swiss franc, for instance, which had been joined to the golden safety surge in appreciation, also abruptly reversed right on October 15. It has once more depreciated to a level far too close to the disruptive visit from last December which destroyed the SNB’s careful and artificial euro peg. As then, this suggests “dollar.” 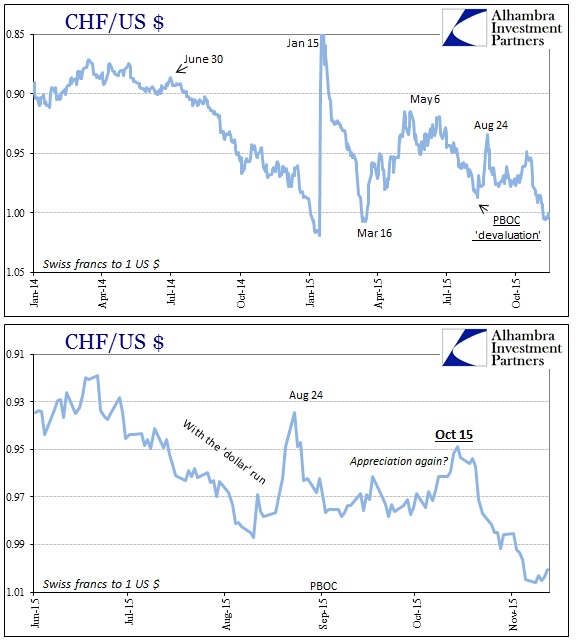 The other at least quasi-safe haven currency, in spurts this past year and a half, had been the Japanese yen. But the yen, too, found a turnaround also right at October 15. 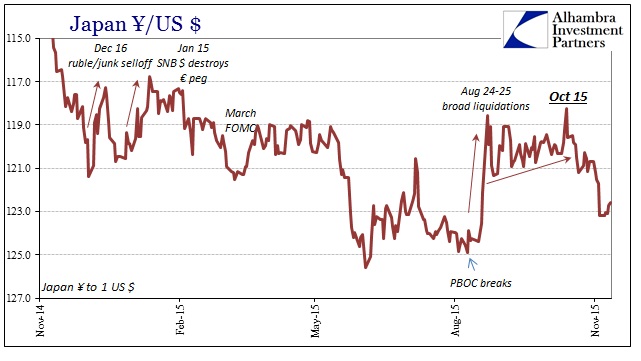 For stock investors, particularly HFT and momentum players searching only correlations, these would have been powerful “buy” signals that biased intuition would have instead read more carefully. In other words, these were not relenting of financial pressure in any way, but rather a seemingly determined return of them. As noted in the past few days, money markets and certainly the Asian “dollar”, pushing down commodities and other risky prices, including stocks a bit, register October 15 as just such degradation.

What is perhaps most ominous about that is how it is a near perfect repeat of the start to Q3 in early July – all within that two-week window immediately thereafter quarter’s end. Not only was the repo rate track mostly repeated, if somewhat shallower inside Q4, in enough hindsight now we can see more than a passing resemblance in LIBOR rates just before they sprung upon the PBOC and Asian “dollar” function in August. 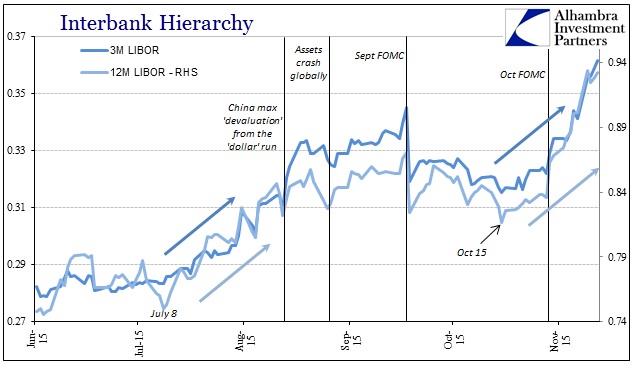 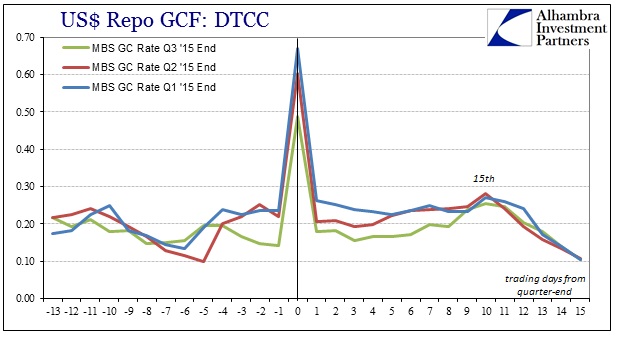 That repetition eerily extends to gold, which I believe is explained as this kind of confusion about its duality; safe haven bids back off a bit and become simply overwhelmed by the negativity of its “dollar”/collateral nature as it surges upon reclaimed illiquidity. After all, recent indications from primary dealer UST coupon holdings suggested severe collateral issues here as well as then. 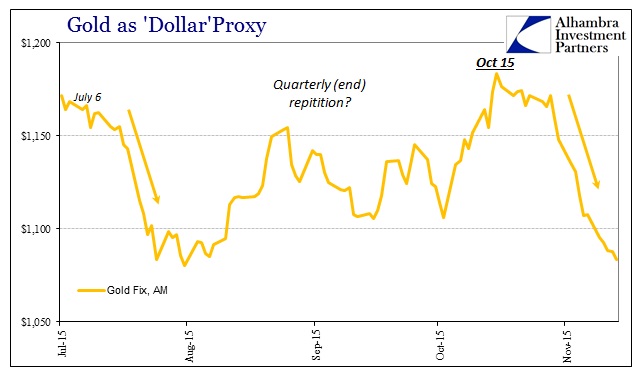 Thus, the implications are potentially even more essential beyond just the obviousness of money market disruption, attaining with it the structural issues that repeatedly plague the eurodollar system in its continuous withdrawal. Paraphrasing Warren Buffet, the quarter end “tide” flowing out seems to be exposing far too much illiquidity and lack of margin for error and operative conduct. I think that is why the junk credit bubble has been unable to find any bid that stocks so easily attracted. The institutional end of it, in particular, is highly attuned to these eurodollar money markets as they are, rather than how everyone wishes them to be (of falling gold prices). 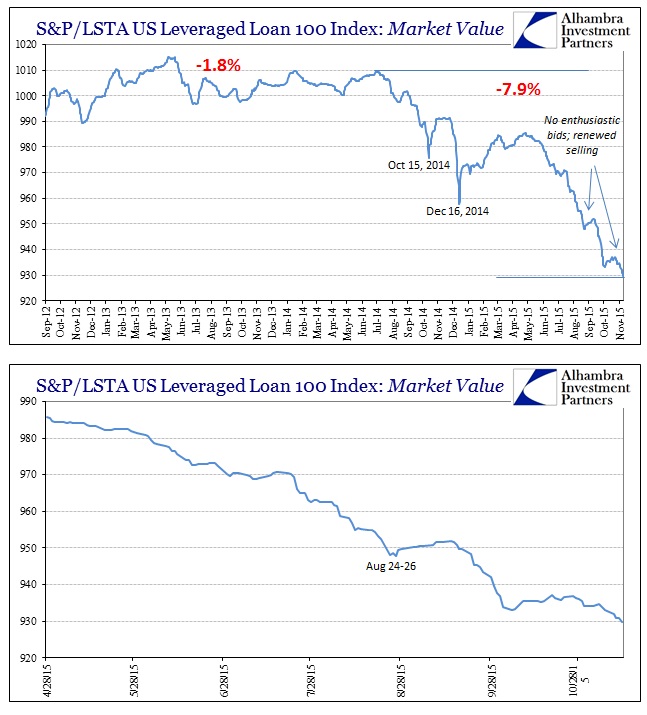 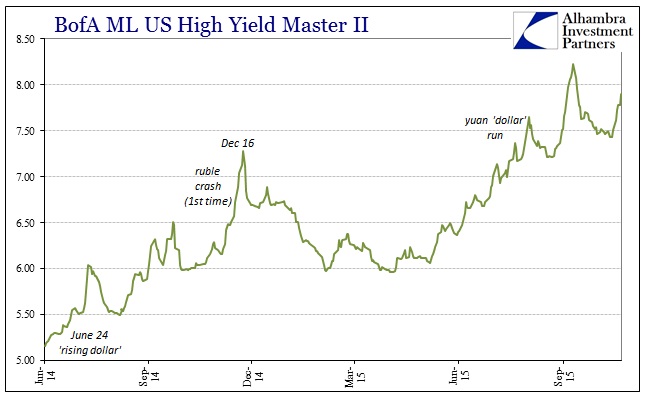 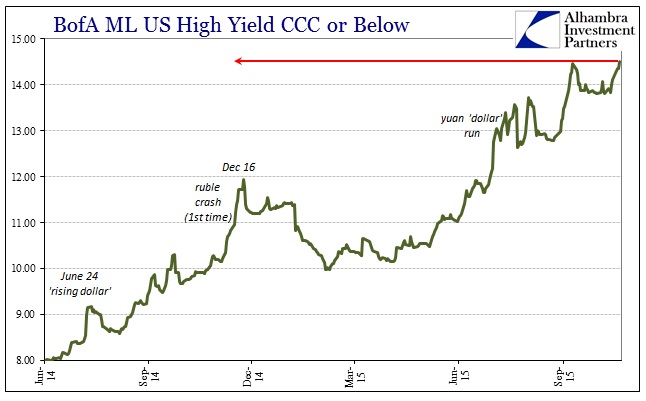 The problem for stocks, as the real economy and its physical space, is that common convention about all these prices seems finally coming around to actual conditions in contrast to how they have been so idealized. It’s not so much that money markets, the eurodollar and/or the Asian “dollar” may be necessarily repeating July/ August but rather that they are at least replaying the conditions that made those drastic events possible. The important qualification of that conjecture is, of course, swap spreads; suggesting that if there is this instilled quarterly pattern of operative dysfunction, it has been much amplified over and above even the last turn that made August so memorable.