Japan’s Continual Recession Reveals Something Important About US Consumers

Japan’s Continual Recession Reveals Something Important About US Consumers

Japan fell back into recession again in Q3, expected this time, which is actually being charitable to Abenomics and especially QQE. To even believe that this monetary insanity has produced even marginal benefits, it has to be given “credit” of at least mini-recoveries in between these “technical recessions.” It is a problem far worse than that, as even a technical recession exists only in the media. By all that truly counts, Japan has never left its QQE-induced hysteria, and thus the Japanese economy has remained distinctly subdued throughout.

Japan’s economy contracted in the third quarter as business investment fell, confirming what many economists had predicted: The nation fell into its second recession since Prime Minister Shinzo Abe took office in December 2012.

Gross domestic product declined an annualized 0.8 percent in the three months ended Sept. 30, following a revised 0.7 percent drop in the second quarter, meeting the common definition of a recession. Economists had estimated a 0.2 percent decline for the third quarter.

Going back all the way to the fourth quarter of 2013, not long after QQE began, Japan’s GDP has averaged a very slightly negative rate. Owing to compounding effects and time, Japan’s real GDP level in Q3 2015 is actually slightly above what it was when QQE began. In other words, where even GDP has not grown for more than two years you can count that as a single and ongoing recession with variation in between that does not change the overall trajectory. The fact that the quarterly levels appear highly unstable only produces the common QE element, one which, as everyone should appreciate, is being reproduced by the US and Europe. 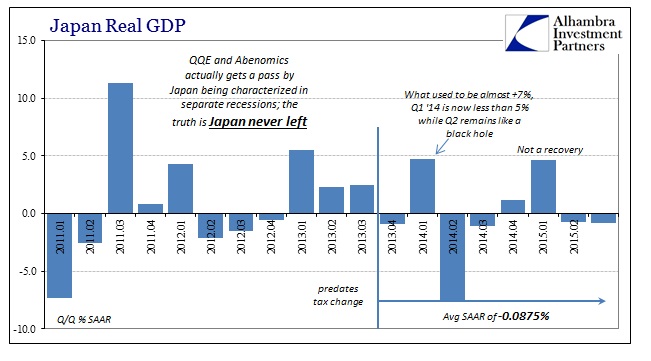 What is obvious about GDP in Japan is also what is obvious about GDP in the US – the upside variations are far more infrequent than the “unexpected” setbacks. That unstable nature, given this inter-geographical reproduction says a lot about monetary policy and its intrusive nature. If there is a difference between them, the regular downside in Japan’s GDP versus the US’, it is perhaps only subjectivity with which each is applied (trend-cycle especially in the US version) that skews the appearance of those downsides more favorably here (“residual seasonality” being just the latest to produce a positive number instead of where in Japan it would be another negative). In the end, however, such degrees are nothing more than splitting hairs about just how much of an economic “hole” has been produced by what is still, somehow, counted among “stimulus.”

In Japan, it has become much more difficult to hide; but it is no less the same in pattern if not degree with the US and Europe. QE holds to neither of those terms, as “quantitative” is as much a fiction as “easing.” GDP was constructed to be most favorable in terms of presenting “growth”, therefor the unsteadiness in GDP everywhere is a signal of the continued economic drag. 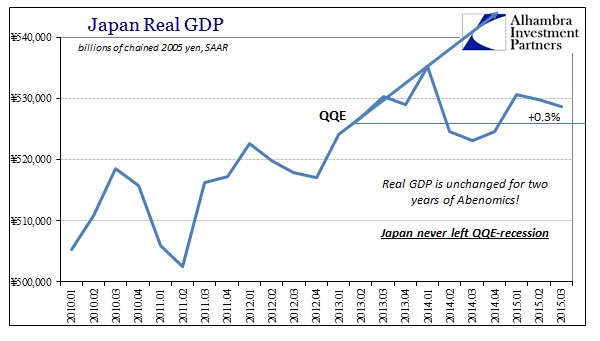 Economists in the US are wholly perplexed by what they diminish as a “manufacturing recession” which does not account with their view of the American recovery and economy. However, Japan shows the naked truth about negative redistribution, especially the monetary kind, which has put Japanese households (consumers) in the worst of all situations. Even monetary practitioners will admit, carefully and with judicious weaseling, that is the case but only so far as the redistribution eventually makes up for the “temporary” household/consumer lapse. They will not account, however, that such “math” may be off in far more than timing, as Japanese consumers again prove beyond any doubt. There is no “net” positive from the affair, which provides US economic observers with the template for the growing sense of “consumer recession” here in America. 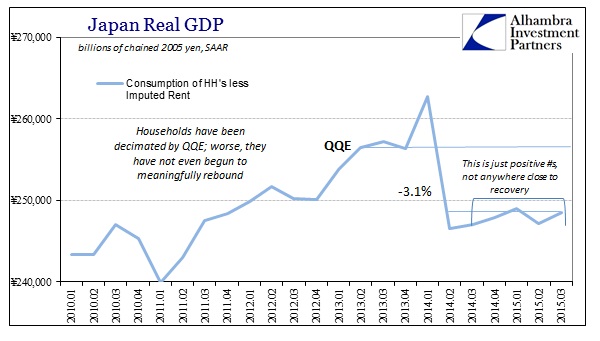 Household consumption in Japan remains more than 3% below the start of QQE; and what little “recovery” has been “gained” is merely positive variation alternating with negative. That is depressive not just in its own sense but much more costly in terms of time and compounding against the anticipated baseline. That is the proxy that most assuredly applies on this side of the Pacific in duplication of Japan’s obvious stumbles; the US consumer has been likewise set back by QE’s just in less open and more elongated fashion.

Yet, none of that intrudes even slightly upon orthodox expectations and understanding. Economists still continue to see QQE as positive, just awaiting the eventual magic formula “Q.” To reconcile that faith produces rather amazing inconsistencies, that only get more so the more obvious the discrepancy between even GDP and the Q(Q)E myth.

“This report shows the increasing risk that Japan’s economy will continue its lackluster performance,” said Atsushi Takeda, an economist at Itochu Corp. in Tokyo. “The weakness in capital spending is becoming a bigger concern. Even though their plans are solid, companies aren’t confident about the resilience of economy at home and abroad.”

What does that last quotation even mean? Business in capital spending, which is supposed to the primary benefit and economic anchor for all this, is “becoming a bigger concern” but yet those investment plans “are solid” despite no confidence “about the resilience of economy at home and abroad.” That is, again, the only way of saying QQE works while everything else, even GDP, continues to prove otherwise now extending two and a half years of it.

From renewed depressiveness in capex to unstable GDP to an overly exhausted consumer, Japan’s GDP track is ours without all the trend-cycle subjectivity and gainful imputations if only because Japan has been QE’d for far, far longer. Make no mistake, however, Japan’s open disaster is of the same kind, if different magnitude, as our own. The country offers both a more statistically uncontaminated explanation for our own struggles as well as, unfortunately, a view to our potential future.