Following up from yesterday’s nod toward monetary policy irrationality, the “relevant” markets today continue to profess their concurrence with it all categorized in that manner. I’m not just critiquing the readings of economists at the Fed and their conditional responses, I’m stating unequivocally that the entire affair, and all in it, has been reduced to pure farce. That starts squarely with the idea that the Federal Reserve, the nation’s deputized monetary agent, has any idea, let alone control, about money and money markets; dollar or “dollar.”

Trading today only furthers that thought as everyone, or at least the “right” people, now perceives December 17 as the final “liftoff” and “exit.” How I ended yesterday seems quite appropriate to open commentary today:

And so it is in that context that all this makes perfect sense; the Federal Reserve will target a money rate that nobody uses in order to project a story in which nobody believes so that economists can call this stunted, decrepit recovery a full one.

That is no interpretation on any account. Start with oil and copper, among other commodities. If the federal funds rate’s only job is to project economic confidence, copper trading below $2.08 again today and WTI trading below $40 again today grabs nothing but failure in that regard. Small wonder, too, given that the fundamentals of each are simply atrocious, having been so for now more than a year. This cannot be “transitory” factors, as true markets, where prices actually clear actual material (or don’t, as in US crude), are wrestling with exactly the same negativity right now as when the same FOMC story was told the first time. 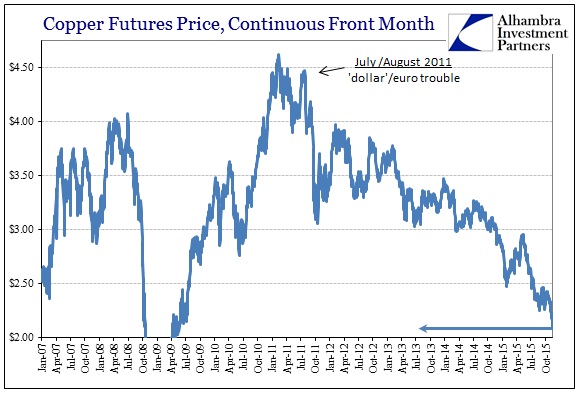 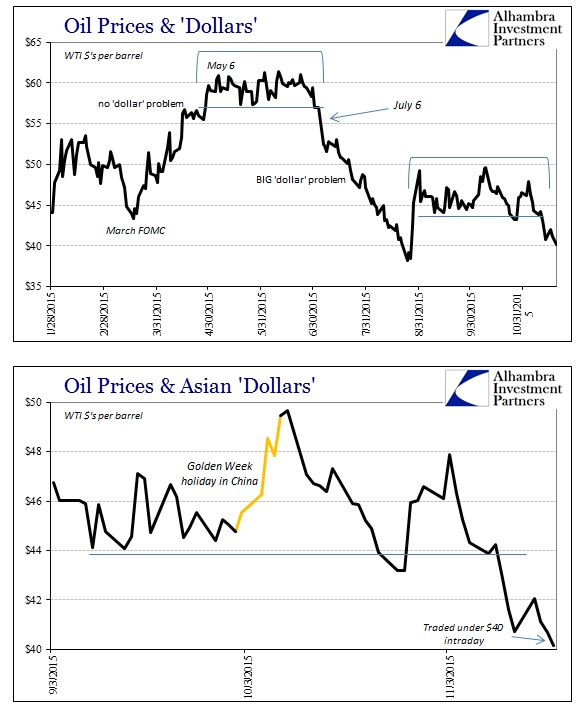 Oil didn’t believe it then and doesn’t believe it now; it can’t, there is simply too much black gold sitting around demanding someone actually take a look at demand. The media remains full of commentary about gluts and OPEC supply without so much as a peep about even the possibility that demand not only surrendered late last year but hasn’t even started an actual retrace since. Instead, given domestic production, it quite easily appears as if oil demand is following the path set out by the “dollar” down, up and back down again. 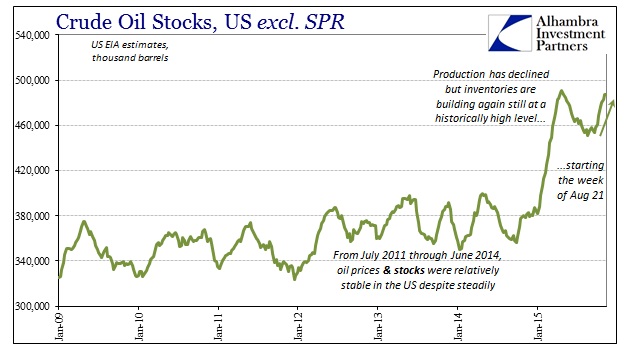 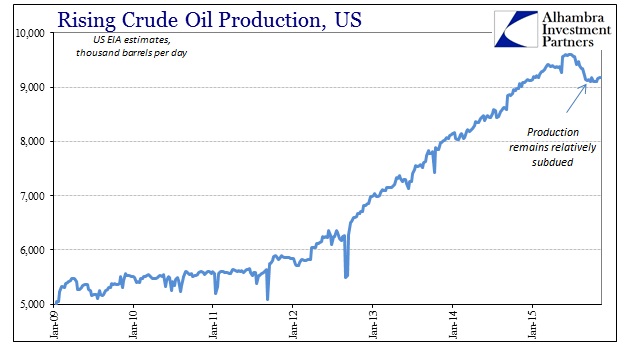 That leaves the money markets shredding eurodollars, wholly unattached to federal funds, in a manner that suggests the same as oil and commodities (which should be expected given this tight relationship). At first, the eurodollar futures curve “obeyed” the FOMC’s restarted “hawkishness” at the October meeting, but even from that point the whole curve never “bought” it. The outer years flattened even as the maturities inside the policy window were obliged to meekly follow.

But that has all changed yet again, as the curve not only continues to flatten, the policy window itself has changed reflection. So the front month contract trades today at 99.5525 where it priced at 99.6275 on November 6 (that’s a pretty large move for a front maturity) while the June 2016 contract is actually higher from that day, 99.20 to 99.25; the rest of the curve has followed in that manner. 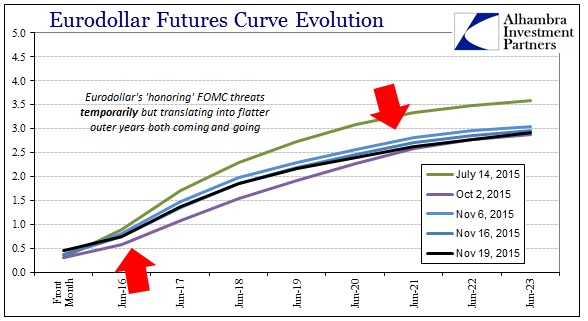 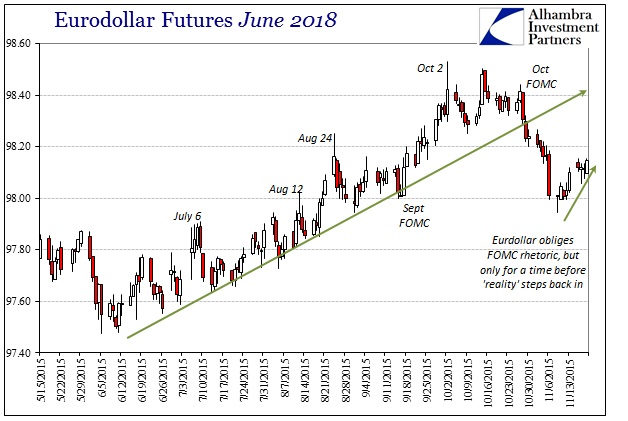 And of course there is LIBOR and more eurodollars. While the FOMC can’t make up its mind about the one money market everyone ignores, the real money markets have been “tightening” for more than a year. In LIBOR, the dramatic movements have nothing to do with the will they/won’t they dynamic of stilted economic confidence, instead there is no such indecision about the entire suite of negativity growing only more apparent.

As if to mock the FOMC itself, the effective federal funds rate remains lower today than what it was immediately after the “dovish” September FOMC inaction. 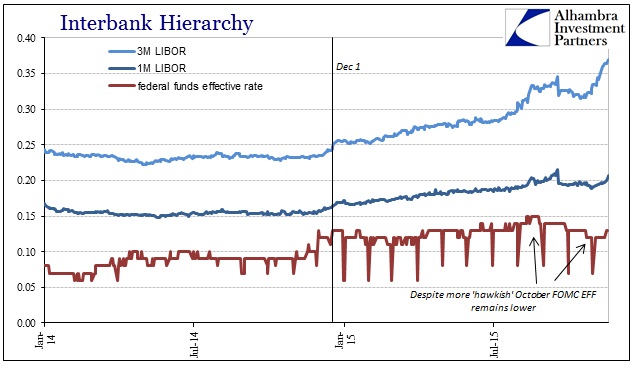 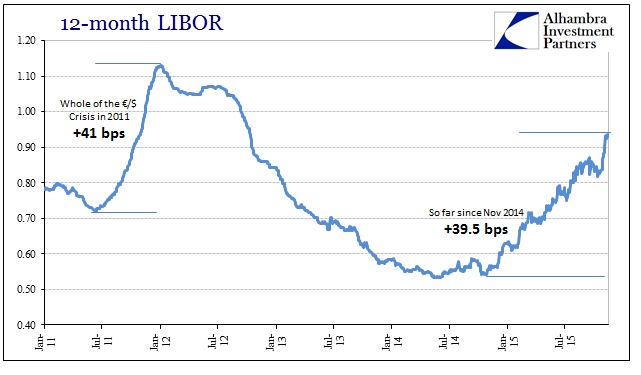 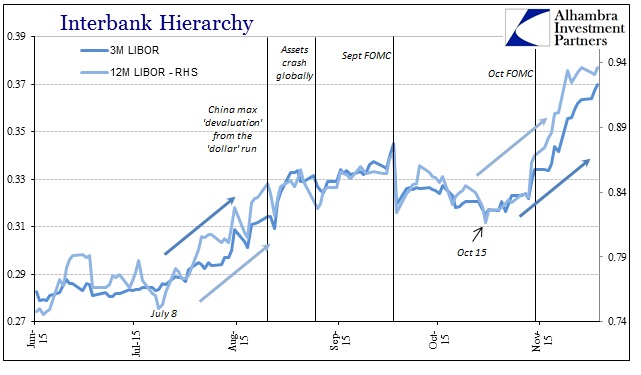 This “tightening” all across “dollar” funding has, of course, nothing to do with the world finally situating in a much better place; rather, eurodollars drain because money markets are the front lines of where the opposite has become too obvious to ignore any longer. That leaves money markets, where the Fed is supposed to conduct its business and project, easily, its views, in total disagreement and disregard. Thus, again, the FOMC thinks it enough to raise the interest rate in an irrelevant money market for reasons that the rest of the actual money markets have been trading directly against for almost a full year.

The Federal Reserve is not a monetary institution; it is a sand castle, a paper tiger.