Argentina’s election is more complicated than simple economics, but for the first time in a very long time there will be no Peronist in office. It may have been billed as a contest between the candidate of the market and that of the state, but either would have found the same bottom opening up on the nation. As so many other places, such as Canada moving in the “opposite” direction, whoever was in office was bound to be handcuffed by the financialism driving economic circumstances.

Even the Economist, normally a visible friend to the statist helping hand, had become disenthralled by what Argentina had become and what is left of the economy.

True to her Peronist pedigree, Ms Fernández has hoarded power and suppressed dissent. She has bent the central bank to her will, muzzled the government’s statistics institute and bullied the media…

The government keeps the peso overvalued. It taxes soyabeans and other exports, thereby punishing the country’s most competitive producers. It has repelled foreign capital by defaulting on debt and refusing to settle with its creditors. To husband foreign exchange, it restricts imports. Ms Fernández distracted Argentines with lavish spending on welfare and energy subsidies. That trick will not work for much longer. The country is in danger of running out of reserves; the budget deficit this year is likely to be 6% of GDP; inflation is estimated at 25%; and growth is absent.

The country is not “in danger of running out of reserves”; it had already done so starting around March 2008. By any real count of international exchange as it is today, not what is thought to be, what Argentina possesses now is the holy rump of central banking taking to its most critical extremes. While Argentina’s neighbor Brazil tracks more closely to the global economic climate, which is already itself an alarming prospect, Argentina is simply further along that same “dollar” road. 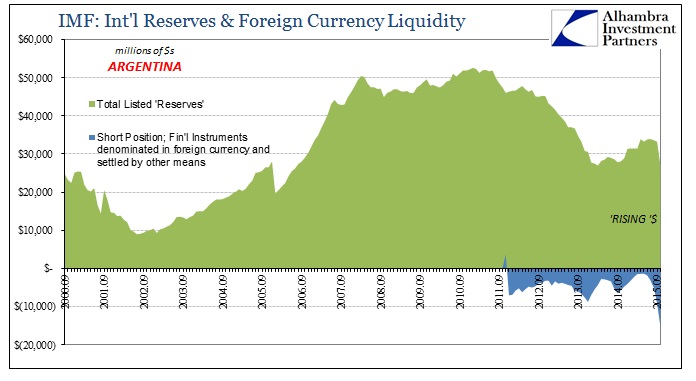 This is not mere semantics or differences of categorization; the IMF strictly reports as much in the call sheets presented by Argentine officials. Unlike domestic accounts, as noted by the Economist above, foreign double counting must balance. The country ran out of the usual form of “reserves” years ago in the first “dollar” crisis that swept the world. It isn’t coincidence that Argentina was forced to “sell” “dollars” starting March 2008. 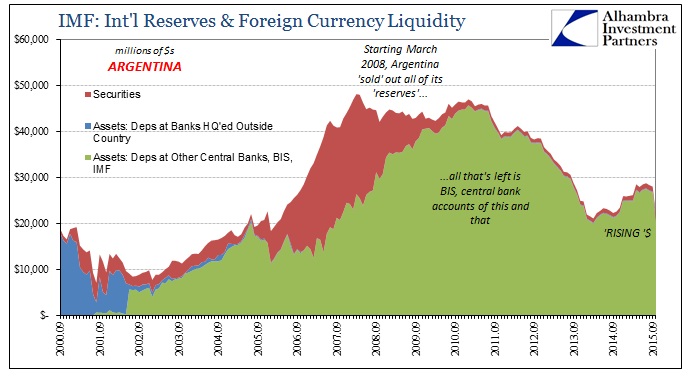 By the end of 2009, the nearly $25 billion in “securities” that Argentina had accumulated during the Golden Age of the eurodollar, coincident, of course, to the US housing mania and China’s related capacity and production surge, were all gone; at the start of 2010, the country reported only $2 billion left. Those “reserves” were instead replaced by “deposits” with unspecified other national central banks, the IMF or the BIS. Thus, Argentina holds not real assets but only wholesale liabilities that no longer afford any cushion or margin for error in international wholesale finance (the global “dollar” short).

And that is what we observe for this “rising dollar” period where Argentina now finds itself on the wrong end of wholesale dissolution. The only thing keeping the country from sliding completely into the abyss are unnamed counterparties of that wholesale nature. 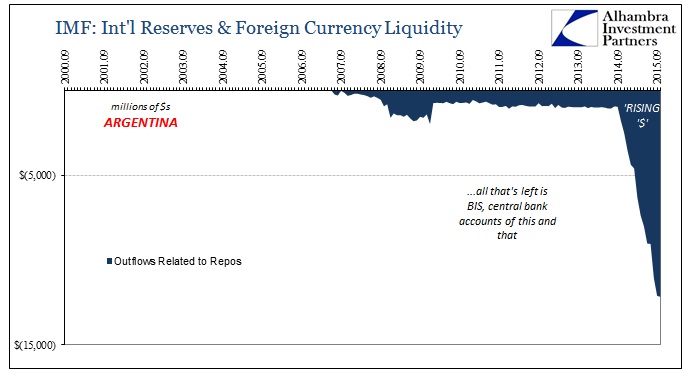 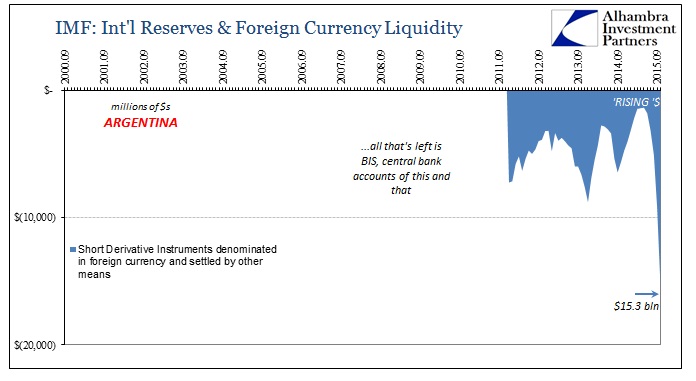 Like Brazil’s international financial experience, it looks like a “dollar” run and quacks like a “dollar” run. As we know from the second chart presented above, there aren’t any private banks as counterparties here, foreign or domestic (not that a domestic bank could even think to provide “dollars”), which raises an intriguing question – which central bank in the world is “on the hook” providing long derivative instruments (the counterparty to Argentina’s short derivative instruments, likely swaps and forwards, shown immediately above) and thus “supplying” “dollars” to Argentina in 2015? For almost any country, these are enormous sums; projected repo flows of -$12 billion and short forex of $15.3 billion speak to not just your everyday financial imbalance even in this swirling world of 2015.

In other words, some central bank or intra-national organization is playing the role of financial provider but one that obviously falls far short of maintaining “currency” order and even economic order. Inflation, in this sense conforming to the true definition of it, isn’t even counted in official statistics because of the “dollar” insufficiency and the economy is falling apart for it. By any orthodox count, this should qualify for an Argentinian recession pushed via “financial shock.”

I bring this up because of two reasons; the first that Argentina’s election is newsworthy itself beyond just the “usual” rebuke to whatever standing party; the second because economic projections around the world refuse to see this for what it is. Here in the US, economists and financial economists will not even think (global or domestic) recession without an attending “shock.”

Slok says that while we are six years into the recovery, business cycles “don’t run on a clock,” with recessions driven instead by imbalances in the economy.

Slok doesn’t see a recession anytime soon. “We need some kind of shock, either from outside the U.S. – it could be a hard landing in China – we don’t expect that.”

It’s illuminating that he would mention China, given that China’s recent experience is not all that different from Argentina and Brazil. “Something” changed in June 2014, but no one in the mainstream will connect the dots to the shocking culprit; they can’t because by their count banks are fully onboard the recovery idea. Further, as noted this morning, “money supply” is not supposed to be any issue after global central banks provided supposedly more than enough in trillions and trillions.

Yet, even where those central banks have done so, nothing seems to conform, not the least of which is this mysterious tendency toward disinflation in terms of consumer prices in the geographies where directly practiced but massive currency-drawn consumer price inflation wherever that comes out on the other side. The global economy is acting as if the global money supply is instead contracting, more than suggesting (demanding) redefining the very idea of “money supply” in contrast to current monetary policy and philosophy.

That could start, obviously, with the experience of Argentina if not Brazil and, yes, China. The global economy started toward orthodox confusion in 2012 and suddenly and shockingly accelerated into downturn in the middle of last year. Economists don’t admit anything other than a soft patch, maybe even an unimportant “manufacturing recession”, but by so many actual numbers, all of them “dollar”, there is indeed an alternate explanation without all the confusion and mystery. They can continue to scan the horizon for an as-yet “shock” but by these counts we already saw it starting June last year, tracing directly, as Argentina’s history of “reserves” shows well, back to the systemic change in eurodollar function in the Great (and global) Eurodollar Crisis of 2007 and 2008.

Not only that, Argentina is beginning to demonstrate the contours of the utter worst case; something I wrote about, relatedly, with China’s August “dollar” experience and run. Namely, in the end, the problem is how wholesale “solutions”, because, like Argentina, there may be no other course, are really and truly the destructive agent instead:

There is another way to look at it, and this is really the nightmare scenario and not just for China but everywhere…It has, by now, appreciated just how limited actual mobilization of all those “reserves” actually can be, as even doing heavy intervention so far was largely ineffective despite all the convention about having all those protective reserves in the first place – the yuan still broke and China fell into the crosshairs of open disorder. And that is the larger point and confluence, where the PBOC “reserves” may contain further disruption if they aren’t properly calibrated (and they never are; again Brazil, Indonesia and the rest) just as the rest of the world wakes up to the fact that all those reserve piles were instead of being insurance against the worst case are the very problem itself – wholesale exposure as the decay in wholesale eurodollar reaches almost predetermined amplification.

If that is indeed the ultimate case, then Argentina further demonstrates and projects the inevitable:

… either the economy starts living up to the promises or liquidity subtracts until prices actually reflect that it won’t. Recent economic data all across the world is more than just the usual gloominess, which means if the latter form of my scenario on reversion comes up it is those countries with the most wholesale exposure that will be hit the worst; more so than they already have. Wholesale “reserves”, in that specific case, are the nightmare to which there is no defense.

Maybe that doesn’t live up to the traditional, mainstream account of a “shock” but for any nation (which includes the US, as 2008 proved) on the wrong end of it, they care not for rigid traditional definitions.