Viewing Payrolls As A Product of A Shrunken Economy

Viewing Payrolls As A Product of A Shrunken Economy

The numbers all change with each month, but nothing really changes. And that includes how the economy changed in 2012 and clearly again in 2015. By raw count of the payroll figures, there were positive numbers in every location in the latest update as only full-time employment was close to zero growth (only +3k for November). The labor force grew for the second straight month which brings the total for the year since January back to just even. And the Household Survey has gained only 1.16 million in those ten months compared to the 2.11 million in the Establishment Survey.

So nothing much has rehabilitated as divergences continue to abound. In a virtual repeat of late 2012/early 2013, only the Establishment Survey appears unfazed by economic weakness spread everywhere else. 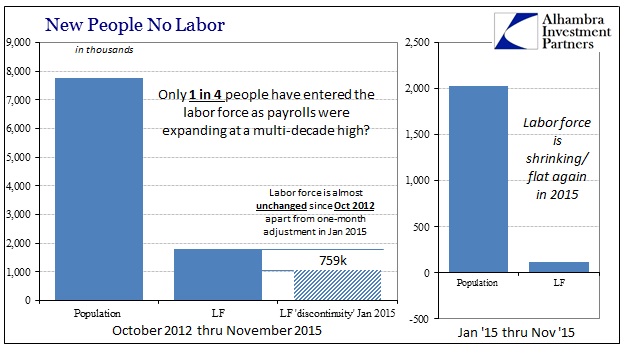 The civilian non-institutional population, those 16 years and older available for work, the potential labor pool, has grown by 2.1 million in those ten months but only a small handful have joined the continued robust jobs market? It may be that the economy is still working off the “slack”, the ongoing pool of previously unemployed, leftover from the Great Recession, but that qualifies as something other than a recovery.

As it was, by count of the BLS it took this “cycle” 95 months to close the gap with the prior cycle peak in terms of full-time jobs. In the past two recoveries, neither of which would be characterized as historically robust, the deficiency was rebounded in just 43 and 41 months. This accounts for a great deal of the confusion about the jobs market and labor interpretation. 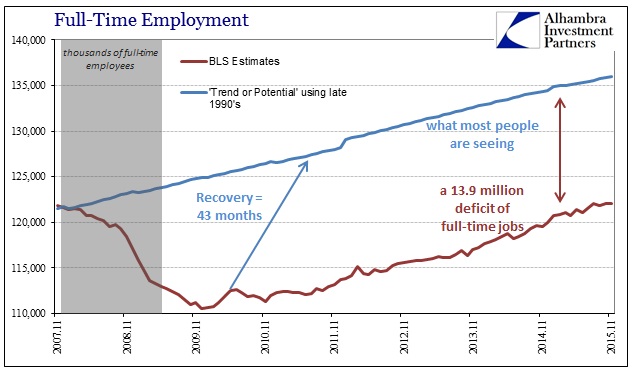 By that I mean the narrow focus of economists on the slope of the return trajectory 2010 and forward against the broader focus of “Main Street” which has no luxury of deflating scale. The unemployment rate is confirmation of the slope for economists, but the participation rate is the real economy’s ongoing suffering. If there was an actual recovery, one which closed not the calculated slack of “secular stagnation” that continually writes down “potential” to whatever deficient level exists at any time, the American economy would be almost 14 million full-time jobs ahead of November 2007 rather than just barely equal to it. From that point alone, China, Brazil and even Canada would not be staring now into the yawning abyss.

But because there is some positive slope, economists have convinced themselves the Great Recession’s apparent permanent shrinking of the economy no longer matters. It cannot be characterized any other way, as the amount of labor, so far as these estimates are somewhat reliable (risky proposition, more below), and labor utilization is undoubtedly smaller. Given the passing of eight years now from the last peak, this cannot be some temporary problem. 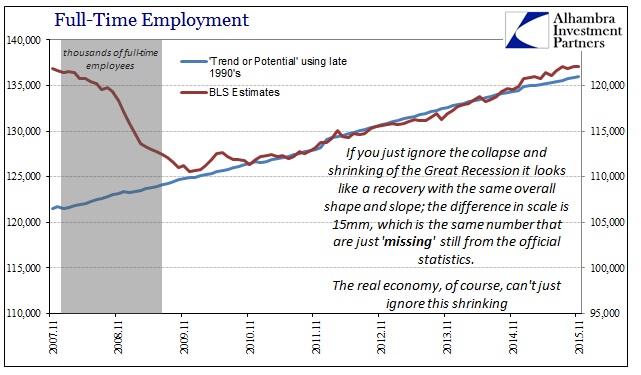 From the prior economic trend, as revealed above, the gap is about 14 to 15 million jobs and workers. The difference between 14 or 15 million may be explained by part-time work, including the apparently permanent rise in those underemployed into part-time jobs, but overall peak-to-peak there are about 15 million people simply “missing” in this “recovery.” 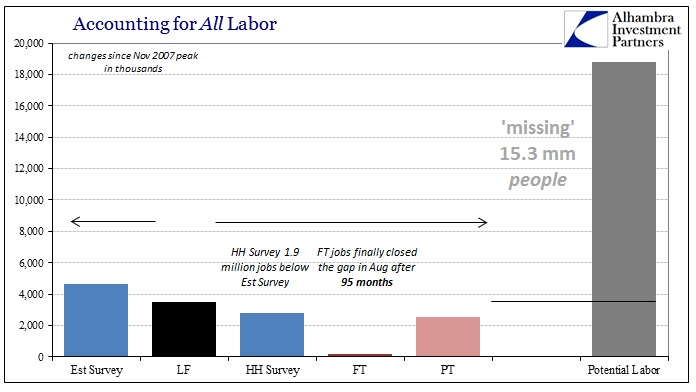 Overall population, the pool of potential labor, has expanded by nearly 19 million since November 2007 while the official labor force has grown by just less than 3.5 million – an absolutely astounding gap that screams out just how far the US economy has shrunk. The difference, those 15.3 million, have fallen off the face of official statistics – they don’t count as employed, obviously, and never unemployed, either. The only way to suggest a recovery is to simply forget that they exist as living Americans, somehow being supported by an obviously lesser productive structure.

The real economy itself, however, cannot as economists just ignore this seizing disparity. A permanently shrinking economy is massive trouble on its own, but so much more so where financial burdens are added as if organic growth. Eventually those artificial supports will find their inevitable expiration, as financialism cannot continue to survive upon a permanently reduced base – an action that is found in eurodollar banks all over the world getting out of the eurodollar business as fast as they can. And so that places together more immediate second derivative considerations against the shrinkage of the structural condition.

Since 2012, “something” has changed in both actual economic condition (more obvious in other places around the world, but not so hidden in the US as to be too difficult to find) and even these employment statistics. The Establishment Survey has been a rock, unalterable by anything other than trend-cycle upswings as, likely, jobless claims fall in cyclical fashion. The Household Survey was once as determined, but in October 2012 found itself departing on a slower track. It was also October 2012 where the labor force also halted from its prior recovery advance. 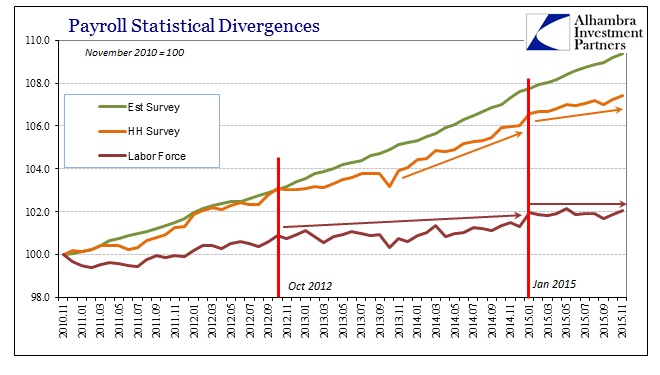 While there is some argument to be made about the interim, especially the middle of 2014 and later that year, these disparities returned in January this year. The Establishment Survey shows only a slightly slowing payroll growth, while the labor force, again, suggests more sinister interpretations.

Unfortunately it is the latter that has been confirmed elsewhere, as even the most optimistic of economists have great difficulty finding corroboration with a robust jobs market (wages, spending, trade). Instead, by count of spending, the Establishment Survey produces yet another gaping chasm. 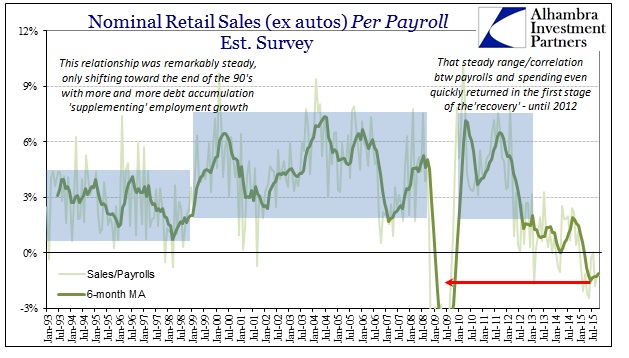 The amount of spending per “job” had been remarkably stable throughout almost the entire history of the modern retail sales series dating back to 1992. The housing and dot-com bubbles even make their appearance in the later 1990’s as a “supplement” to employment income showing up as greater spending growth per job. Even the first part of this recovery after the Great Recession appeared to conform to that solid correlation – until the middle of 2012. 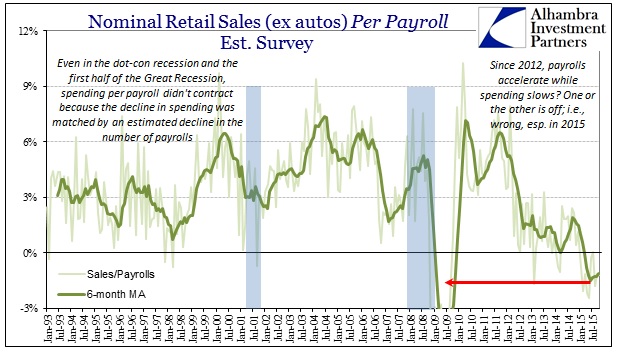 That was a dramatic shift, as even in recession (apart from the total collapse in late 2008 and early 2009) the relationship had remained stable. In both the dot-com recession and the first phase of the Great Recession, spending per Establishment Survey payroll was within that historic range. That makes sense since both series essentially confirm each other, as in those recessionary circumstances the reduction in payrolls was simply met by a nearly equivalent reduction in spending – common sense. The collapse in the worst of the Great Recession was equally simple, namely that even those with jobs cut back significantly on their spending.

That raises the issue about how to interpret this disparity after 2012 and then growing much, much worse in 2015. Are people with jobs cutting back yet again? Are new jobs paying only the absolute minimum (which might explain the labor force as a weak product of such financial-driven redistribution)? Or are there far less jobs and job growth than projected by BLS subjectivity? Those are the only explanations and none of them suggest anything good about the economy, and all of them would at least share a root in the structural problem of the shrunken economy. What we may find out years from now after new benchmark revisions is that there may be some of all three.

There is agreement, however, on one point; even the Establishment Survey and related CES statistics (like JOLTS hiring) show as significant slower this year as compared to last. Thus, by all these counts, “something” has changed this year. The pure Establishment Survey view is that it is nothing to be concerned over, as the economy and labor market went from ridiculous good to merely good. Everything else has transitioned from confusing (from the orthodox view) to alarming (now suddenly a manufacturing recession). 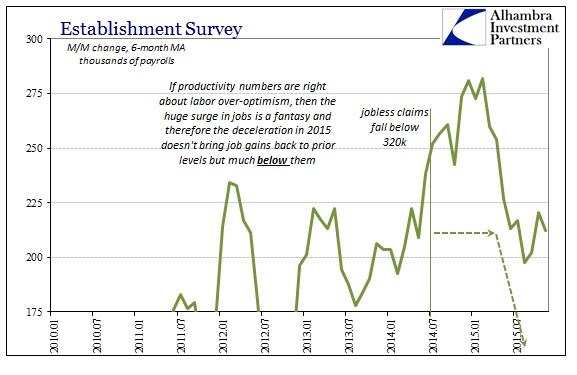 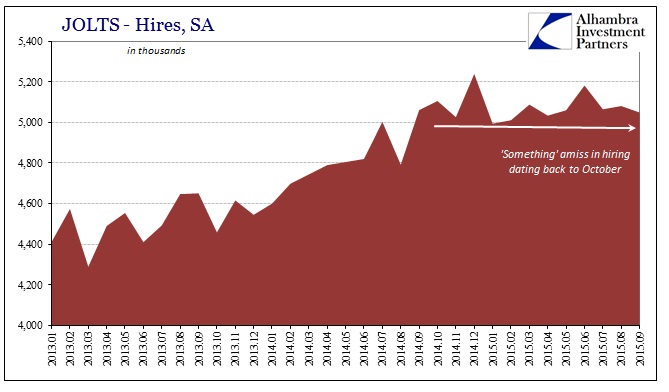 What we are faced with, then, is the prospect of a permanently withered (ing) economy slowing in 2015 for more than just a few ignorable months of aberration. A permanently smaller economy beset by significant deceleration is a serious problem, which, unlike the unshakable optimism in the mainstream, actually goes a long way to explaining everything from China, Canada and Brazil to these manufacturing, profit and revenue recessions that were supposed to be impossible this year. That was, after all, the entire point of last year’s “best jobs market in decades”; it meant, in that context, there could be nothing but clear sailing and inarguable booming from that point forward.

Of course, that view could only have been established where the enormous, gaping hole left behind by the Great Recession was discarded as past trivia. The instability in GDP as well as the “unexpected” events of 2015 all simply derive from that starting point; economic and financial.