One of the problems with GDP as a statistical Swiss-Army knife for economic considerations is its very methodology. This doesn’t mean that there aren’t good and sound reasons for that kind of construction and presentation, only that in making such choices some elements are left out; even important pieces. In this case, I refer to the double counting problem which GDP solves by only incorporating “value added.” In other words, the supply chain is effectively abbreviated and minimized.

Again, there is appropriate justification for this approach; endeavoring to construct a single metric for what is produced, you don’t want to include that product being resold repeatedly. Thus, total sales for wholesale and retail are not simply added up along with manufacturing. The supply chain at various points only contributes “value added” principles at each step along the way – placing GDP from the perspective of the end user.

But the businesses and resources that take those accounts, especially labor, are not so condensed. Revenue in the wholesale segment, for example, isn’t just set aside for wholesalers as it, in fact, contributes a great deal to the prices and utilization of the products passing through its contributory activities and functions. This is where inventory becomes a heightened consideration particularly around economic inflections.

Concurrent with the retail sales report, the Commerce Department supplies its estimates for the full supply chain (just one month further in arrears from retail sales). Combined with wholesale sales and inventory, the current state of the “goods economy” is downright dire and in a way that isn’t yet captured at the top levels into GDP and even retail sales. For example, total retail sales for October 2015 are estimated to be 1% above October 2014. That figure is awful by itself, but it in many ways covers up how much worse it has been underneath that supply/sales level.

Total business sales were estimated to be $1.317 trillion in October, inclusive of the 1% gain in retail sales to $391 billion. However, we already know that wholesale sales contracted almost 6% in October, leaving manufacturing sales to suffer a year-over-year decline also of 6%. Inventories, by contrast, have increased in both retail and wholesale, with only manufacturers starting toward reversion. That means that total business sales were $1.354 trillion in October 2014 and only $1.317 trillion this year, but inventories that were $1.788 trillion last year are now $1.814 trillion. These dollar figures and estimates don’t sound much like 12%.

It makes this manufacturing and goods sector somewhat misleading as it represents a lot more goods than sales. Unfortunately, businesses especially in the wholesale and manufacturing segments (and retail will follow eventually) have to adjust to their sales levels as they are in determining output and resource utilization, not as GDP would have it. It is the definitive refutation to the “12%” dismissal. 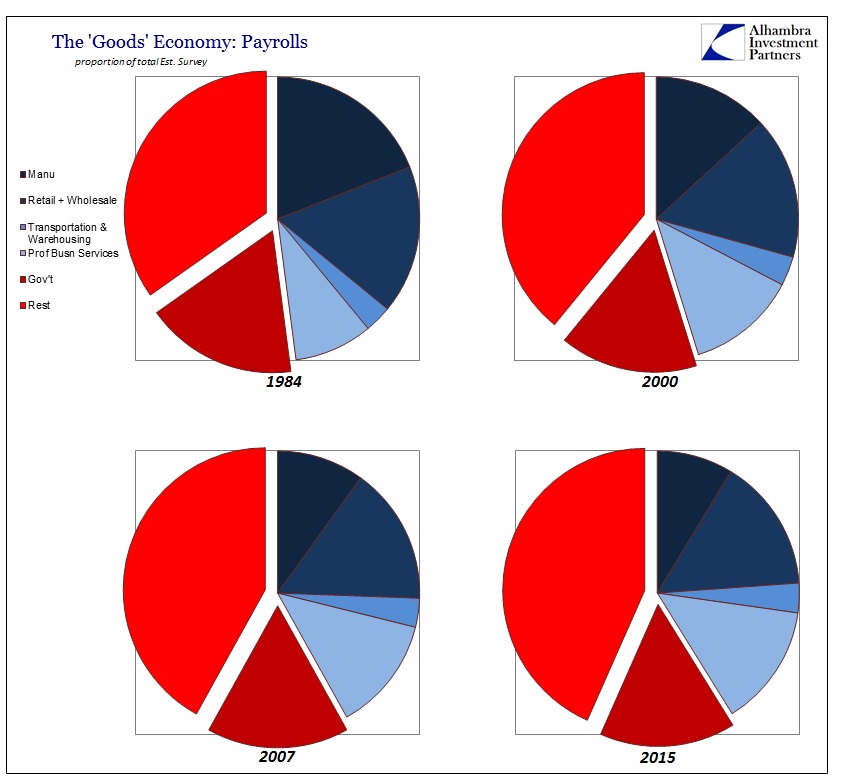 If you do the math, GDP does not count $1.3 trillion times 12 for its estimate of the “goods economy”, but only the “value added” contributions from each source. And in doing so, it misses quite a bit of important texture and granularity as to why there might already exist an increasingly intractable “manufacturing recession” in addition to wholesale chaotic imbalance, and why that might already be adding up to a massive, economy-wide dislocation. Total sales in just manufacturing for all of 2014 were just shy of $6 trillion, for point of reference. 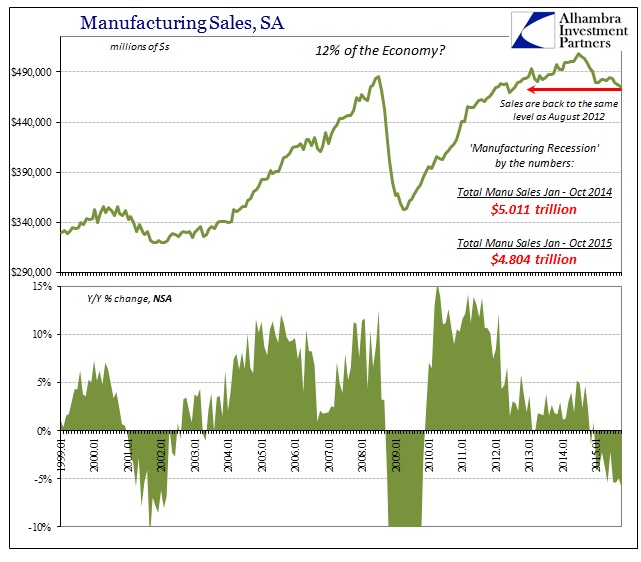 Not seasonally-adjusted, manufacturing sales in October 2015 were 2% less than October 2012; seasonally-adjusted sales were equivalent to August 2012. That would qualify as corroborating the recessionary interpretation. Cumulatively, sales in 2015 so far are running $200 billion behind last year’s pace; that is not just “manufacturing recession” it is a deep and abiding economic hole emanating from consumers (here and overseas) and their ability to drive all this.

As noted everywhere else so far, despite all this recession in the goods economy, at every level of the supply chain, there isn’t yet any improvement in terms of inventory alignment. Even the small decline in manufacturing inventory noted above is relatively insignificant in this context. The updated inventory-to-sales figures for the whole supply chain make that point amply, leaving little for future hope that any of this turns around; and a great deal to suggest it is only beginning.

Manufacturing may only be 12% of GDP, but that is not its proportion to the whole of the actual economy. The goods economy, too, is much more than that and economists would be wise to start taking it seriously. 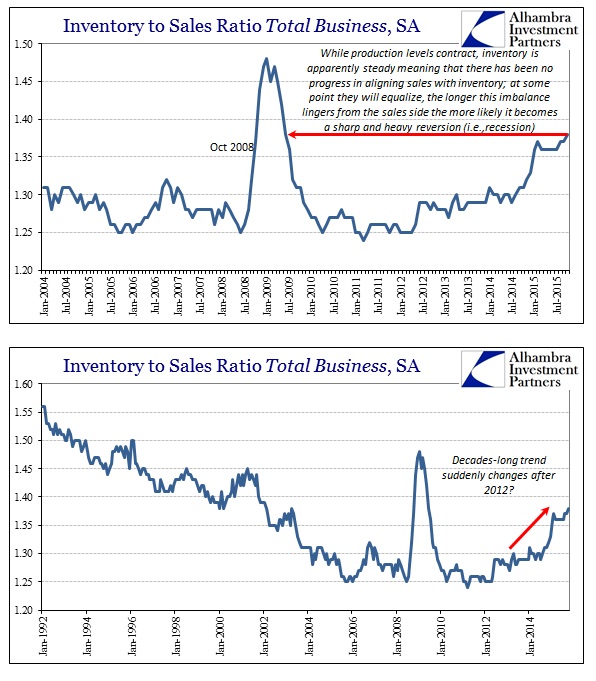 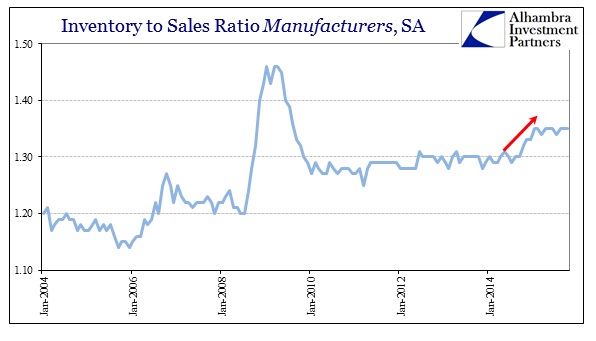 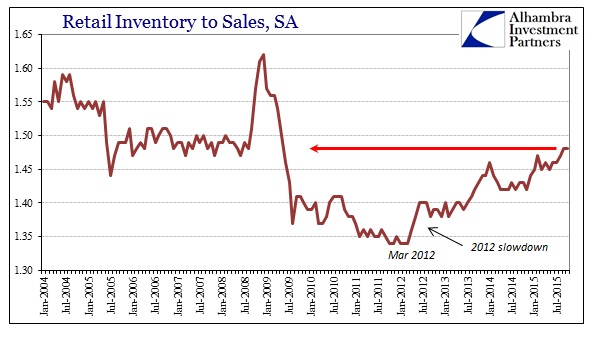 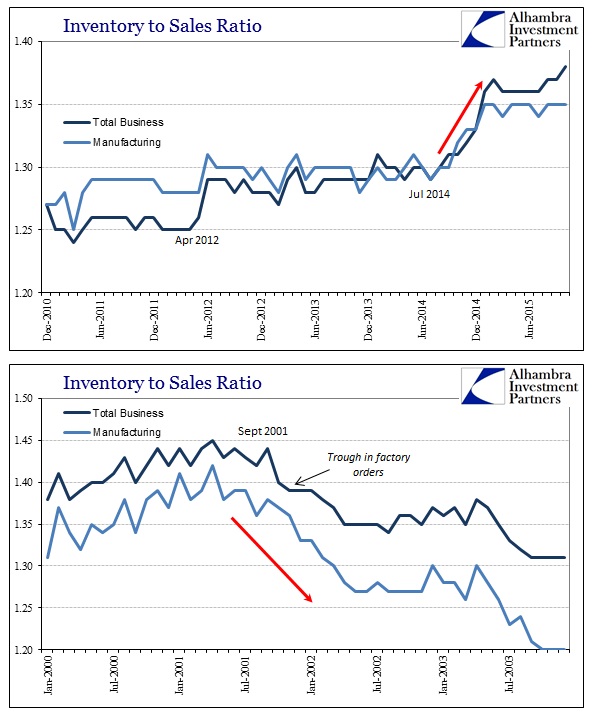