It is perhaps the perfect situational irony of this economic age, with the FOMC set to end its “emergency” policies by raising rates for the first time in a decade the very same day that the very same outfit, the Federal Reserve’s staff, just declared that the past cycle may have long since peaked. The monetary policy “exit” is a nod toward worries about the economy possibly overheating, meaning that the FOMC is considering a sprightful and fulfilling economic course at the same moment the institution declares the next recession may have already begun. You cannot make this up.

With the “manufacturing economy” in recession, the latest figures for industrial production more than suggest that has spread and broadened. A negative year-over-year rate for IP is almost completely recessionary as a signal for economy-wide interpretation, but -1.2% leaves almost no doubt. Since 1950, only three months of IP have been worse than -1% without association with a declared recession – two of those, June and July 1952, relate to the end of the Korean Conflict. The absence of false positives, and the consistency of interpretation, is far more than compelling.

As with general manufacturing, the decline is sharp and sustained, both characteristics that define our traditional recession understanding. Given the state of inventory, imperiling as it has been, this is not unexpected but more so concerning. In other words, as has been noted of manufacturing, the decline in output to this point has failed to solve, or even dent, the inventory imbalance. Thus, if we should find a full-scale industrial and economic recession already in process and progress, what might it look like to actually achieve inventory reversion and balance? 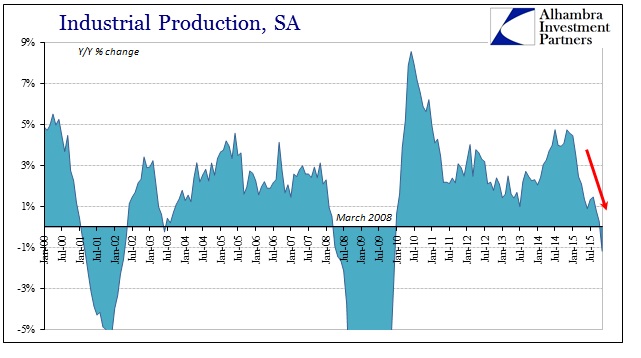 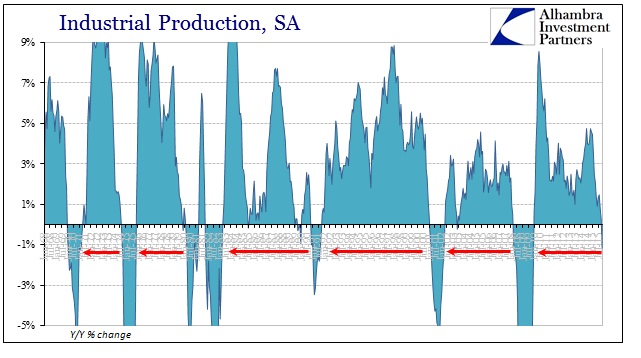 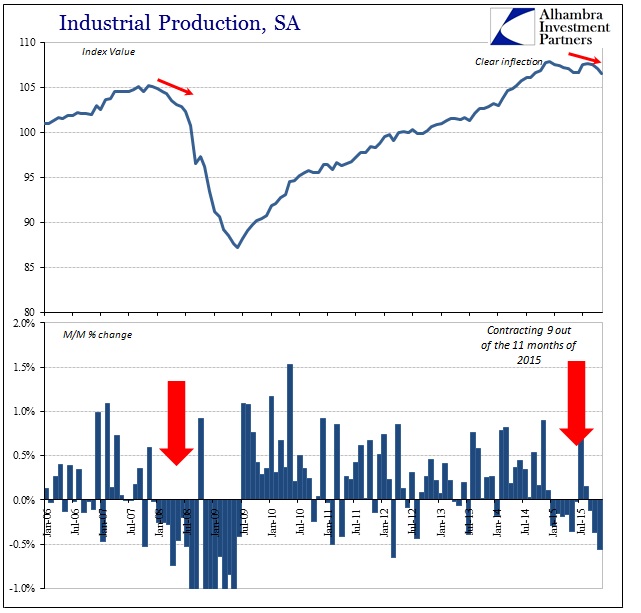 Nothing about the industrial production figures are optimistic. Capacity utilization dropped sharply in November, undoubtedly as weak opening Christmas sales are the writing on the wall for what comes next. It would take an actually strong Christmas season to deliver the unlikeliest of an economic rebound, meaning 6+% in retail sales, a level not seen since 2011, rather than the less than 2% already picked up. Thus, capacity utilization falls back to the same level the Fed estimated in early 2012 as clearly preparations have begun for the backlash. 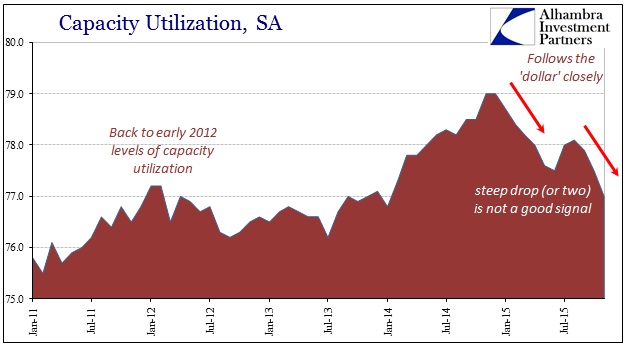 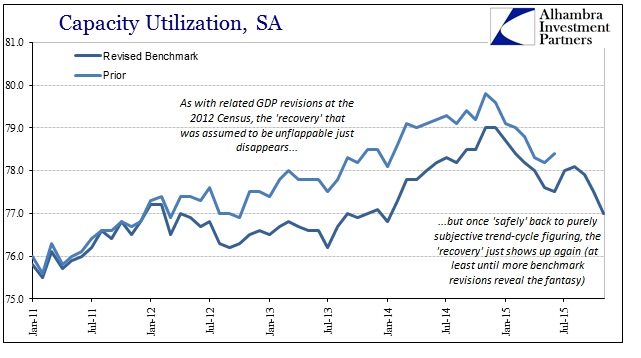 Perhaps surprising to some, the energy sector was only a small drag on overall production levels. Clearly that economic segment has turned with oil prices, but in the total IP series the declines originate elsewhere. Again, that is a very negative sign since the energy and oil sector will, at some point, turn from a minor nuisance failing to provide prior years’ boosts to a major depressive factor. If IP is already weak elsewhere, it will be much worse should (when) energy truly turn. 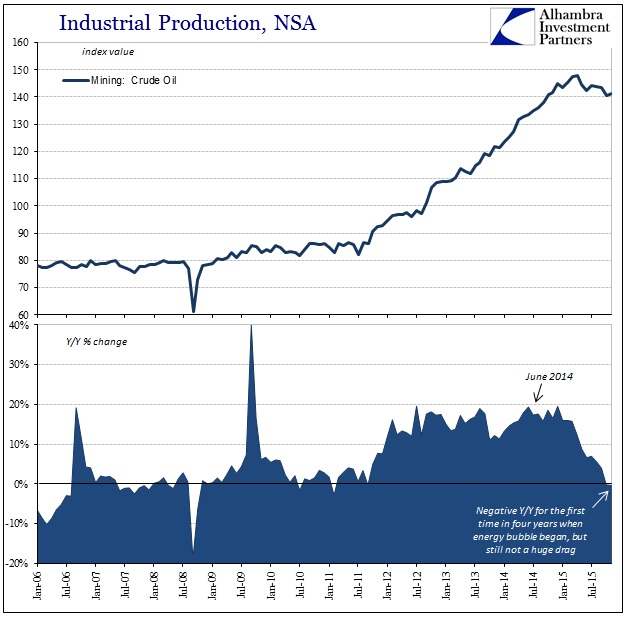 It is again fitting that the Fed would be forced (by its own actions and non-actions) into trying to signal a full and booming recovery on the very day that one economic account that provides almost no false signals joins all prior recessions and their aftermaths. That is equally a constructive observation from the list below, as the recessions’ immediate aftereffects are in many cases as bad if not worse than the recessions themselves – another frightening prospect given where we are now already in perhaps a new cycle and what has yet to be unleashed as that realization spreads.