I covered a good deal of the background here, so I should only reiterate that it is a profound difference in actual mechanics this time as opposed to last. At the end of June 2004, Alan Greenspan’s Fed commanded that money market rates follow a new federal funds target (from 1.00% to 1.25%) and money rates did so. Of course, the total products of money dealing in the wholesale banking format paid little or no attention to any of this, but in strictly dealing with these traditional money markets there was little to suggest anything like resistance to policy direction.

That has been the biggest fear of the current FOMC and its “exit” strategy, as they are no longer afforded such faithful deference; those very wholesale monetary products, dark leverage and so forth, have forced the Fed to now “put up or shut up.” It is a very strange place to be, given that central banks in the post-Great Inflation setup are creatures of credibility more than anything else (owing to rational expectations theory). To be challenged risks being revealed powerless.

Caution is obviously warranted here since it has only been two days since the FOMC vote. However, the first two days under this new paradigm have not been according to plan. The front-facing money markets seem complacent enough, LIBOR especially, but it is the back ends, the more hidden and darker recesses of wholesale function, that hint already at grave dissatisfaction. 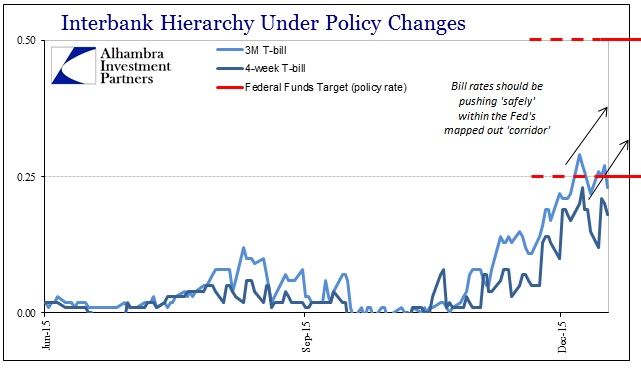 Again, I don’t to want to get too carried away with this, but bill rates moved in the “wrong” direction yesterday having been already “too” shallow leading up to the decision. They may correct given enough time, but other money indications suggest (subscription required) already the potential for monetary miscarriage at this first step.