From the perspective of foreign economies, the primary economic problem is US consumers. That sets up a contradiction as noted earlier today with durable goods estimates; economists think US consumers are quite healthy and the contraction in manufacturing is due to foreign economies. The inventory imbalance, or bloat as it was aptly described, cannot be an overseas problem and therefore more than suggests that US manufacturers hold the same depressive capacity as those foreign economies.

Examination of the US’ trade figures shows the export recession quite clearly, but instead of imports coming in furiously to gain market share from US manufacturing there only remains the opposite. Both exports and imports are contracting which can only add up to a global problem sharing common cause – US consumers (and European). 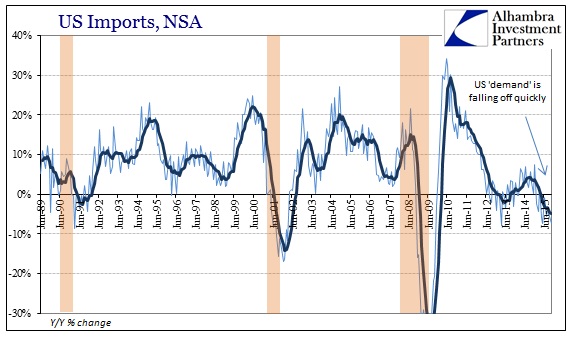 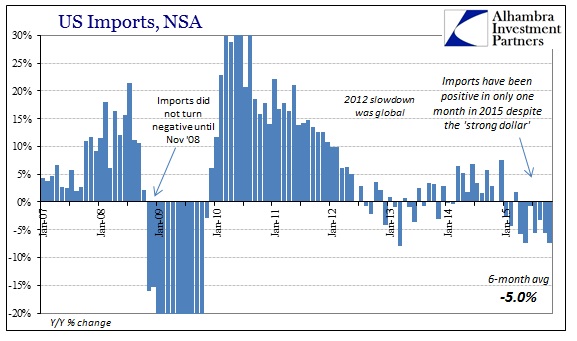 Since the trade balance tips so far in favor of imports, the global trade paradigm skews in the direction of US “demand” as a primary driver of activity. If global “demand” for US goods softens so sharply then it stands to reason that export economies are being subjected to decreases in activity originating here. The import numbers bear that out easily, as US import “demand” and flow has continued to sink all year. Imports fell sharply in October, -7.4%, matching May for the second worst month of the cycle (only March 2013 was more of a decline). These sharp declines continue month after month despite the dollar supposedly making imported goods that much more competitive.

And in the places where we are supposed to find foreign goods rapidly displacing US manufacturing in competition for “healthy consumers” there is only contraction. Imports from China fell 2% in October, bringing the 6-month average back down to just 3% yet again. For an economic system predicated on sustained 20% growth rates, sustained 3% growth is not just depressive it is dangerous (exactly as is unfolding there). 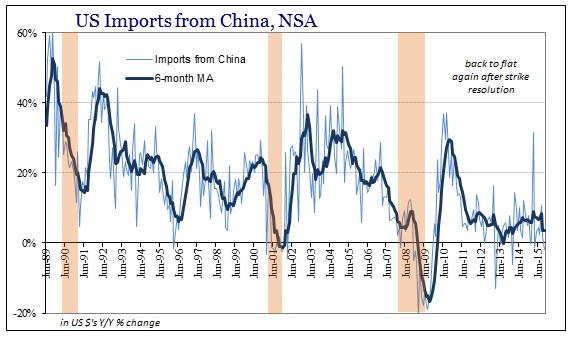 The same goes for Japan, where QQE’s direct appeal toward exports (from Japan’s perspective) has fallen short in every way imaginable. The importation estimates from the Census Bureau (US perspective in dollars) showed yet another -10% month, making October the second worst in the QQE era. 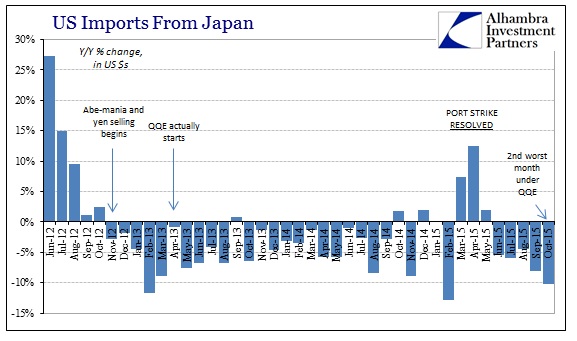 There are simply no strong US consumers hidden within these figures. Instead, US import activity is quite unmistakable in placing foreign trade next to US manufacturing, both with the same “demand” problem. From there, it is not surprising that US exports would fall off so sharply. Not only do US exporters have the same end demand problem (exports to Europe were up only 1.9% in October), they are also subjected to Asian economies suffering the dual grasp of global trade collapse and the financialism that predicted it. 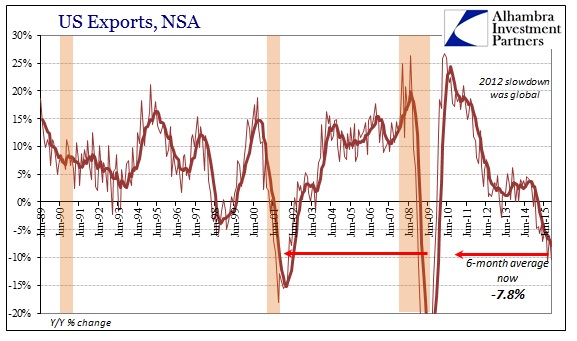 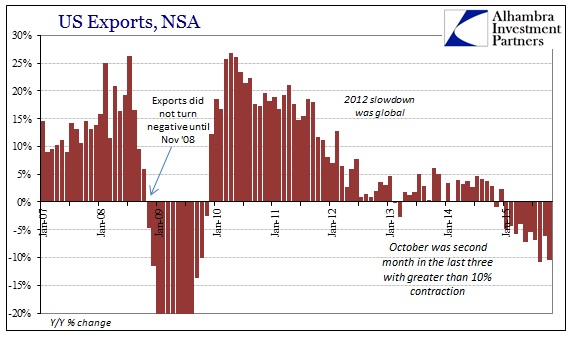 On a seasonally-adjusted basis, US export levels in October were as low as May 2011, while imports sink back toward the worst months earlier in the year. The concurrent slump in US foreign trade, both out and in, is therefore left as a matter of the global economy including US “demand” rather than overseas economies in spite of strong US consumers. The uniformity is both compelling and contradictory for what a healthy US economy is supposed to look like. 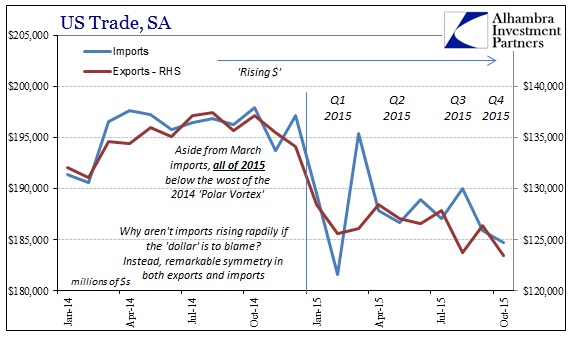 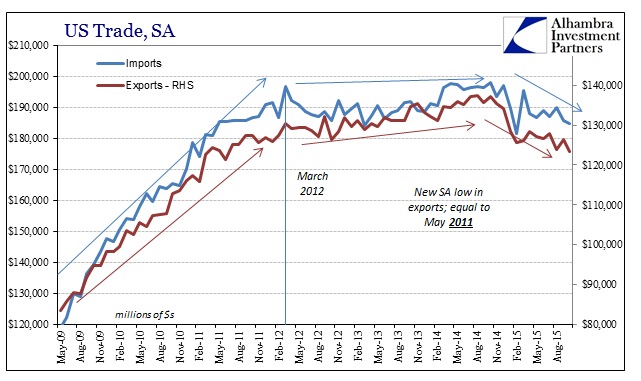 Since US manufacturers attain their sales from the same general economic space as foreign manufacturers, it is alarmingly simple logic to figure the same causation where both foreign and domestic production suffers the same decay at the same exact time. If US consumers were freely spending and the dollar exchange playing a steady role, then US manufacturers might suffer where foreign manufacturers would be increasingly busy; that just hasn’t happened. Instead, foreign production is as bad if not worse than US production, which leaves little consistent blame apart from the US (and European) economy.

It is the inventory overhang that unites these economic forces in common sympathies; and that is a huge, global problem. After all, if inventory is building here while production everywhere around the world is already slowing or contracting, then the variable that has shifted can only be “demand” where demand is falling faster than production everywhere is and has been adjusting. There is no positive spin on the US economy in the trade data, only developing and intensifying alarm.