The Inescapable Trap of the ‘Dollar Short’; Brazil Edition

The Inescapable Trap of the ‘Dollar Short’; Brazil Edition

For bond ratings agencies, finding a bottom is pretty much their job. In other words, they are supposed to map out and understand, as best as may be possible through regressions and equations, the forces that might define a worst case. By direct implication, a worst case probability is determined by at least some ray of hope, some perhaps buried light at the end of a tunnel.

Brazil has been downgraded rather regularly in the past few months. On December 16, Fitch downgraded the country’s sovereign debt to junk, BB+ with a negative outlook. Earlier in September, S&P had already cut its ratings on Brazil to junk, the first to effectively unwind what Brazil’s rapid rise in the 2000’s had seemingly delivered: investment grade status achieved notably in 2008 and more than that, recognition of economic and financial maturation. The events of 2015 tellingly no longer just threaten to unwind the progress, they are actively exposing the fable behind it all along.

Not be left out, Moody’s on December 9 placed Brazil on ratings watch for its own downgrade undoubtedly to junk, presenting the South American former powerhouse a glimpse of the full ratings trifecta. The reasoning was and is entirely simple; nobody can see a bottom.

Fiscal and economic activity indicators continue to sharply deteriorate with no clear sign of when they will bottom out. Rapidly and materially worsening macroeconomic conditions are leading Moody’s to reevaluate the extent to which the fiscal and economic performance will conform to the assumptions supporting Brazil’s rating at Baa3. The likelihood of a turnaround in Brazil’s economic and fiscal performance now appears unlikely in 2016, and the key assumptions underlying our Baa3 rating — a return to GDP growth of around 2% and a primary surpluses [sic] of a similar magnitude beyond 2016 — also appear to be at risk.

What Brazil is facing right now is in almost every way worse than the Great Recession. Already there are comparisons inside Brazil to the Great Depression. It may not be yet that far along, but everything is continuing month after month in that direction which can only leave observers wondering when.

Industrial production, for example, contracted only in 12 consecutive months during the Great Recession, bottoming out at around -16%. The latter five of those negative comparisons were actually on the way back toward recovery. Starting December 2013, industrial production in Brazil has contracted in all but one month (out of 23), including the last twenty straight; the reading in November was -11.4%, not really out of the ballpark of the worst of the Great Recession. The difference is that at 11.4% and nearly two years, there is, again, no end in sight as if the whole economic paradigm of pre-2008 progress was completely coming undone. That would seem as if the Great Recession was not the worst of it, but just a temporary taste or warning of what could be if financial conditions were not set back to pre-crisis order and operation. 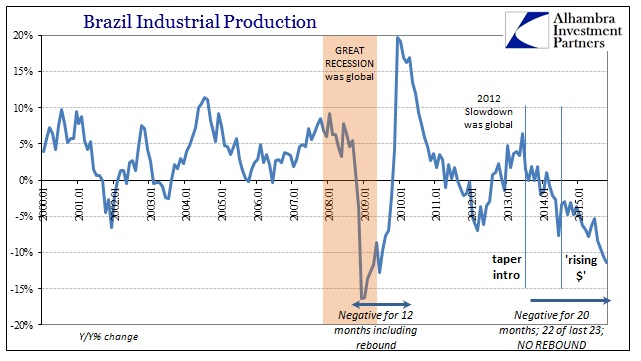 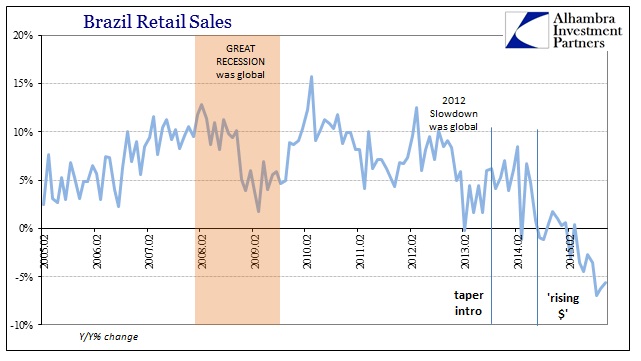 The economy itself is in a state of freefall, both externally and internally, yet consumer price inflation is threatening a rerun of the terrible times of the 1990’s. Thus, there need be no conjecture as to what might be ailing Brazil, as it is entirely monetary in nature. When viewed inside the eurodollar system, Brazil’s attainment of maturation in 2008 and investment grade status was exactly the same only in reverse; what we are seeing now in 2015 and into 2016 are the effects of not simply Brazil going in reverse but the monetary system that drove Brazil’s changes in the first place. As China, the eurodollar “built” Brazil and is now tearing it asunder with nothing to stop it. 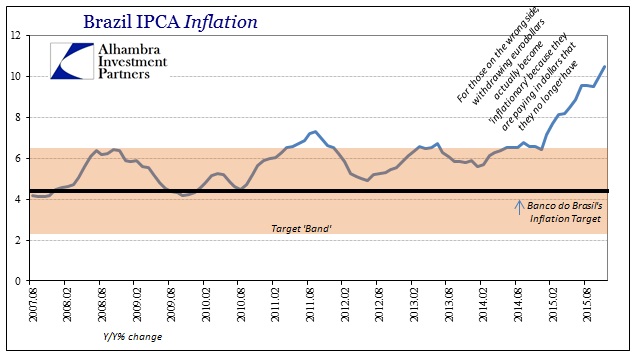 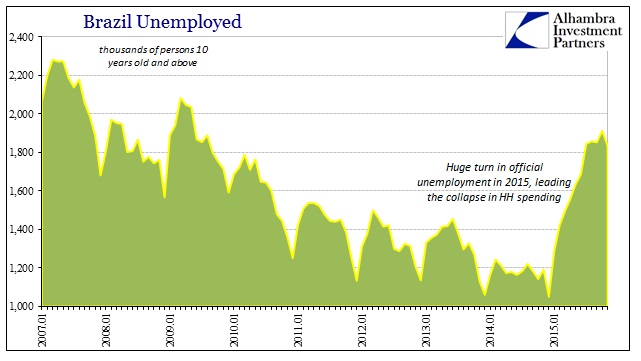 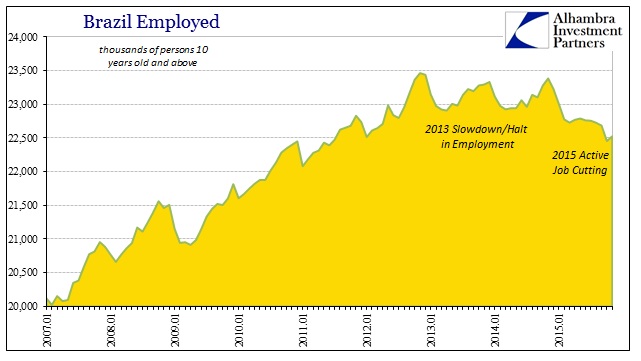 That is why central banks all over seem so powerless against it. Banco do Brasil hasn’t been sitting on the sidelines throughout this downturn, having been active pretty consistently since the middle of 2013 (and before that, only in the “wrong” direction given the circumstances that were building). The benchmark SELIC rate had been raised seven times starting in late 2014, bringing the policy target now to rest at 14.25%! That followed nine rate hikes from the middle of 2013 into 2014, as the benchmark rate was just 7.25% when Bernanke first uttered the suggestion of “taper.” 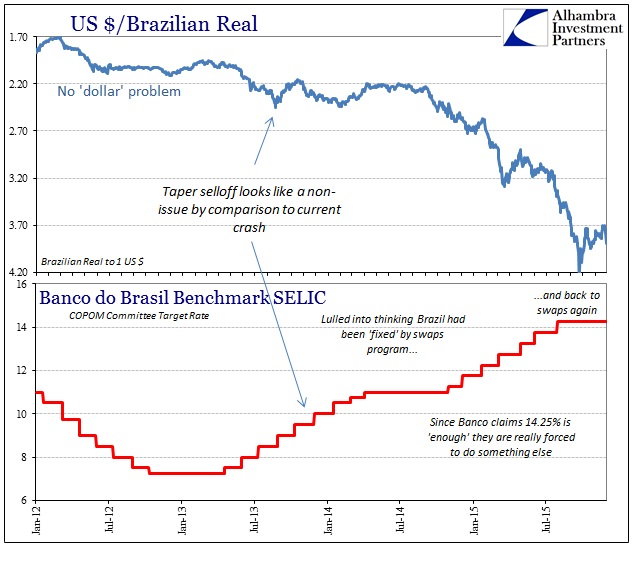 Banco has indicated, as has Brazil’s economy, that it can do no more on that count; an admitted impotence within monetarism’s primary monetary tool. Not be idle, the central bank has been quite and desperately alive in wholesale “dollar” manipulation, too. While Brazil’s financial system is perhaps unusually quirky, Banco has participated in getting local banks to increase their attainment of “dollars” (what are called swaps are really manipulations in the local dollar rate) – to get Brazilian banks already short the “dollar” (synthetically) to go much more short. It was a disaster, and one that was entirely predictable. 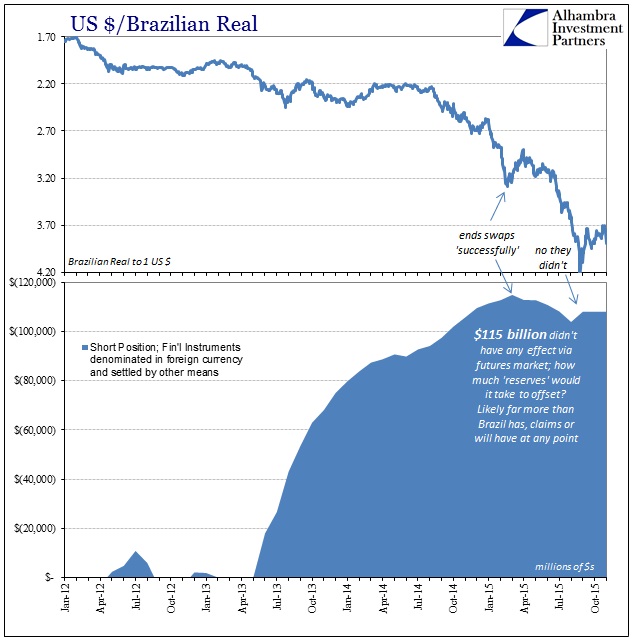 That is because Brazil’s problem is not entirely of Brazil, at least not in the way most people think. The country has a “dollar” problem and unless that gets solved there is nothing that can be done. As noted with Russia, the problem was locked in place the moment Brazil accepted the “dollar” and undertook its synthetic short decades ago; it was a deal with the devil, providing artificial and short-term what looked like prosperity but in the end terribly fleeting and ultimately unsound. The only choices now are to sit back and hope the eurodollar system is somehow, miraculously rebuilt on its own, of its own, or to get busy with realigning and re-orienting the economy and financial system to a far different paradigm where credit-based expansion (explosion) in the world’s reserve currency no longer drives artificial and speculative “growth.” Brazil’s economy is already forcing that latter option, and the results so far are frightening in how far it might have to go.

It is tempting to leave it at Brazil and fall back into the same complacency that has comforted seemingly unrelated parts of the world and markets the past few years; until you recognize the same type of transformation already underway, and quite far along, in China, Russia, Canada, Japan, Switzerland, junk debt in the US, a global commodity crash, etc. The list elongates with a common theme among them as what looks like “deflation” and deflationary tendencies; as if there were a contraction in the world’s collective “money supply.” There is, and these “unexpected” economic nightmares are primary pieces of evidence for that.

If you think what the Fed has done via QE’s (or the ECB or BoJ) counts as money, then this is all mystifying. The full weight of that reckoning is carried far beyond just the BRICs and emerging markets. There is no mystery as to why the US itself, supposedly enrapt via QE’s cloaking liquidity, would suddenly and “unexpectedly” fly right into a manufacturing recession and its own stalling tendencies. The credit-based dollar reserve currency is a global issue, and the global economy is being forced to adjust whether economists declare it or not.